Do Screens Give You Headaches? This Town Without Wi-Fi Might Be Your Salvation

A strange clash among locals, scientists, and techno-phobes has made this hamlet both a haven and a hell. 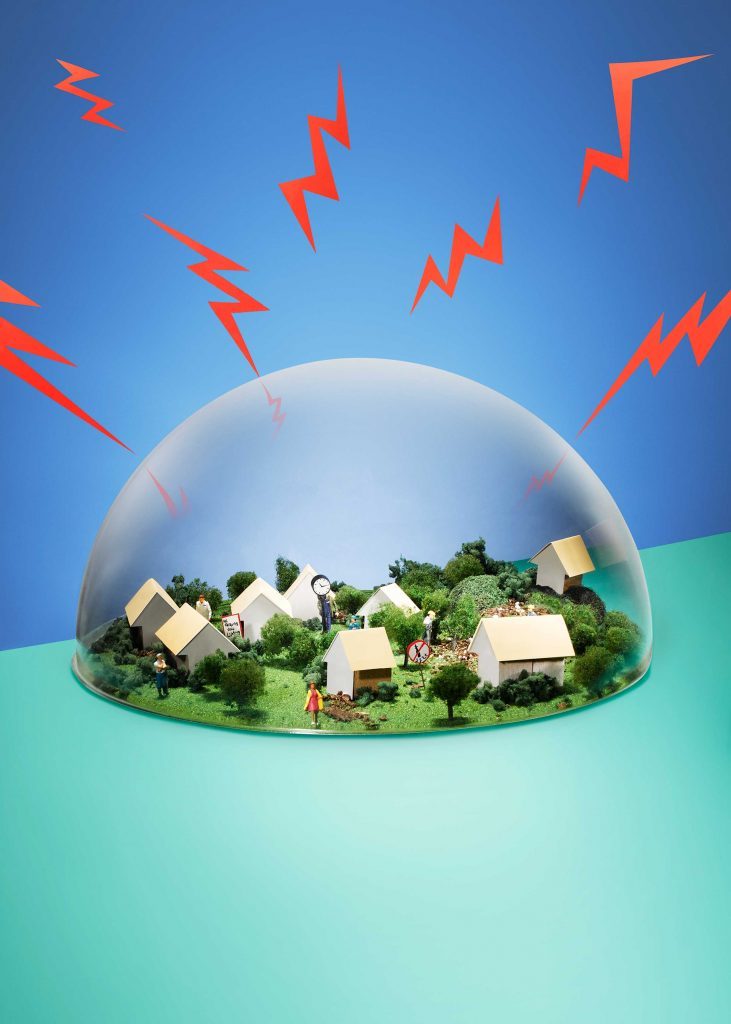 You can’t make a call or send a text on your cell phone in Green Bank, West Virginia. Wireless Internet is outlawed, as is Bluetooth. As you approach the tiny town on a two-lane road that snakes through the Allegheny Mountains, the bars on your cell phone fall like dominoes, and the scan function on the radio ceases to work. The rusted pay phone on the north side of town is the only way for a visitor to reach the rest of the world. It’s a premodern place by design, devoid of the gadgets and technologies that define life today.

The reason for the town’s empty airwaves is visible the moment you arrive. It’s the Robert C. Byrd telescope, aka the GBT, a gleaming white, 485-foot-tall behemoth of a dish. It’s the largest of its kind in the world and one of nine in Green Bank, all of them government owned and operated by the National Radio Astronomy Observatory (NRAO).

The telescopes aren’t the “ocular” kind you’re probably thinking of. They’re radio telescopes, so instead of looking for distant stars, you listen for them. There’s a long line of astronomers all over the world who want to use the GBT, a telescope known to be so sensitive that it can pick up the energy equivalent of a single snowflake hitting the ground.

Such a highly tuned listening tool needs total technological silence to operate, so in 1958, the Federal Communications Commission established a one-of-a-kind National Radio Quiet Zone, a 13,000-square-mile area encompassing Green Bank where, to this day, electromagnetic silence is enforced every hour of every day.

[pullquote] “Life here isn’t perfect, but at least I’m not in bed with a headache all the time.” [/pullquote]

Residents who live within a ten-mile radius of the Green Bank observatory are allowed to use landline telephones, wired Internet, and cable televisions, but microwave ovens, wireless Internet routers, and radios are forbidden. You can have a cell phone, but you won’t get a signal.

Lately, because of how much its way of life diverges from the rest of America’s and whom that has attracted, Green Bank (pop. 143) has come to feel smaller than ever. For locals, the technology ban is a nuisance. For others who come to Green Bank for their health, the town has become a refuge.

In 2007, Diane Schou, now 66, moved with her husband, Bert, 69, to Green Bank from Cedar Falls, Iowa, hoping that living free of technology would relieve her relentless headaches—headaches, she insists, that were caused by signals from a cell phone tower near her home. The Schous are members of a growing community who say they suffer from “electromagnetic hypersensitivity,” or EHS, caused by exposure to radio frequencies. The symptoms, according to sufferers, also include nausea, insomnia, and chest pains.

Mainstream medicine doesn’t recognize the syndrome, but Diane and Bert couldn’t be more sure. After her declining health forced her to give up her job as an agricultural scientist, the couple drove hundreds of thousands of miles across the United States seeking a respite from her condition. After returning from a sojourn with relatives in Sweden—the first country to consider EHS a disability—the Schous heard about the Quiet Zone from a national-park ranger in North Carolina. The couple pulled into Green Bank shortly thereafter, and Diane lived in her car behind a convenience store to give the town a try.

“Life here isn’t perfect,” Diane says. “But at least I’m not in bed with a headache all the time.”

Fellow sufferers heard about Diane, and soon she was letting visitors stay in her home when they came to experience life in Green Bank. By 2010, roughly two dozen “electrosensitives” had moved to Green Bank. Jennifer Wood, a former architect before electrosensitivity felled her, remembers walking into the Schous’ home and being welcomed by a handful of other electrosensitives. “It was just like family,” Wood says.

But not everyone in Green Bank has been so keen to meet the new neighbors. Diane ruffled some feathers when she tried to get the local church to remove its fluorescent lights, which electrosensitives find excruciating, and when she told people to stop using their cell phones as cameras around her. The senior center, one of the town’s few gathering places, obliged her request to replace the fluorescent lights in one area, but when she asked that her food be delivered to her from the center’s kitchen—so she wouldn’t have to walk under other fluorescents—Green Bankers began to protest.

“There have been some rough spots in dealing with other members of the community,” says the diplomatic sheriff David Jonese, whose Pocahontas County department has been called in several times to mediate disputes between old-timers and newcomers. “They want everybody in the stores and restaurants to change their lighting or turn their lights off when they’re there, which creates some issues,” he says.

Echoes of the Past

As you might guess, friction between the locals and the transplants has happened before in Green Bank. After breaking ground on the initial telescope in 1957, the NRAO needed to hire PhDs and engineers, and it began hiring scientists from out of town. But the locals—some of whose farms and homes had been condemned and displaced to other parts of town to make room for the observatory’s campus—didn’t take so kindly to the influx. In 1965, a group of farmers even complained to their members of Congress that observatory scientists had caused a crop-killing drought.

“I remember one fella said the observatory would make it rain when they wanted it to,” says Harold Crist, a 90-year-old Green Bank native who worked for the telescope at one time.

The big-city transplants didn’t immediately warm to the locals either, but with time came acceptance. Today many Green Bankers work various jobs at the telescope. The campus’s cafeteria is a favorite lunch spot for locals. And more than a few scientists moonlight as artists, with work hanging in the local art center.

[pullquote] “We’ll be so far out of the loop one of these days that we won’t be able to catch up.” [/pullquote]

At Green Bank Elementary-Middle School, right next door to the telescope, you’d expect to find teenagers bemoaning the unavailability of the cool gadgets they see on TV. But that’s not the case. According to one seventh grader, plenty of kids in Green Bank have smartphones, and although they can’t get a signal, they’ve found a work-around. By connecting to a home Wi-Fi network (that the telescope interference protectors apparently haven’t picked up on), kids don’t need a cell network to talk to their friends—they can just use the new texting functions in apps like Facebook’s Messenger and Snapchat. Teenagers and technology, it seems, will always find a way.

The End of Quiet?

A force outside Green Bankers’ control may ultimately settle the clash of old-timers and newcomers, of technology and tranquillity: the fate of the thing that started all the trouble in the first place—the telescope.

It’s funded entirely by the National Science Foundation, and in 2013, in a wave of belt tightening across the federal government, a committee recommended shutting down the campus. NSF hasn’t said whether it will accept the proposal, but a decision is expected this year. If Washington chooses to divest, and the observatory can’t find outside funding, it could close by 2017.

Which might spell the end of Green Bank’s quaint life free of Wi-Fi.

Some say that in the long run, that may be best for the town. “We’ll be so far out of the loop one of these days that we won’t be able to catch up,” says Crist, who raised six children in the Quiet Zone and watched some of them move away. “People come back home and think we’re living in the Dark Ages.”

But a shuttered telescope would obviously be a nightmare for the electrosensitives who are just making inroads with the locals.

In the fall of 2013, Monique Grimes married Tom Grimes, a native Green Banker who owns a spacious hundred acres where lambs and sheep roam. Tom says his wife, who moved to town from Florida when her EHS symptoms forced her to quit her job as a speaker for a public policy group, helps out around the farm, and he introduces her to locals. “They get to know me first as Mo, not as an electrosensitive,” Monique says. “Now friends of ours have gone so far as to replace the lightbulbs in their house because they want me to come to visit.”

Whatever happens to the telescope, Monique is pretty convinced that her version of the science will prevail and that future generations will see the folly of iPhones and laptops just like past ones did of asbestos and cigarettes. As one sympathetic doctor told her, “You were just born a hundred years before your time.”

“Or after,” Tom quips, knowing there’s a decent chance they’re sitting in the last quiet place on earth.

In July 2015, the NRAO received funding for the Green Bank Telescope for at least five more years. 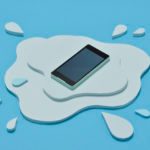 Why You Shouldn’t Go Swimming with a Water-Resistant Phone