Adventures abound for a mom and her two boys amidst the glaciers, lakes, and forests of Alberta’s Rocky Mountains. 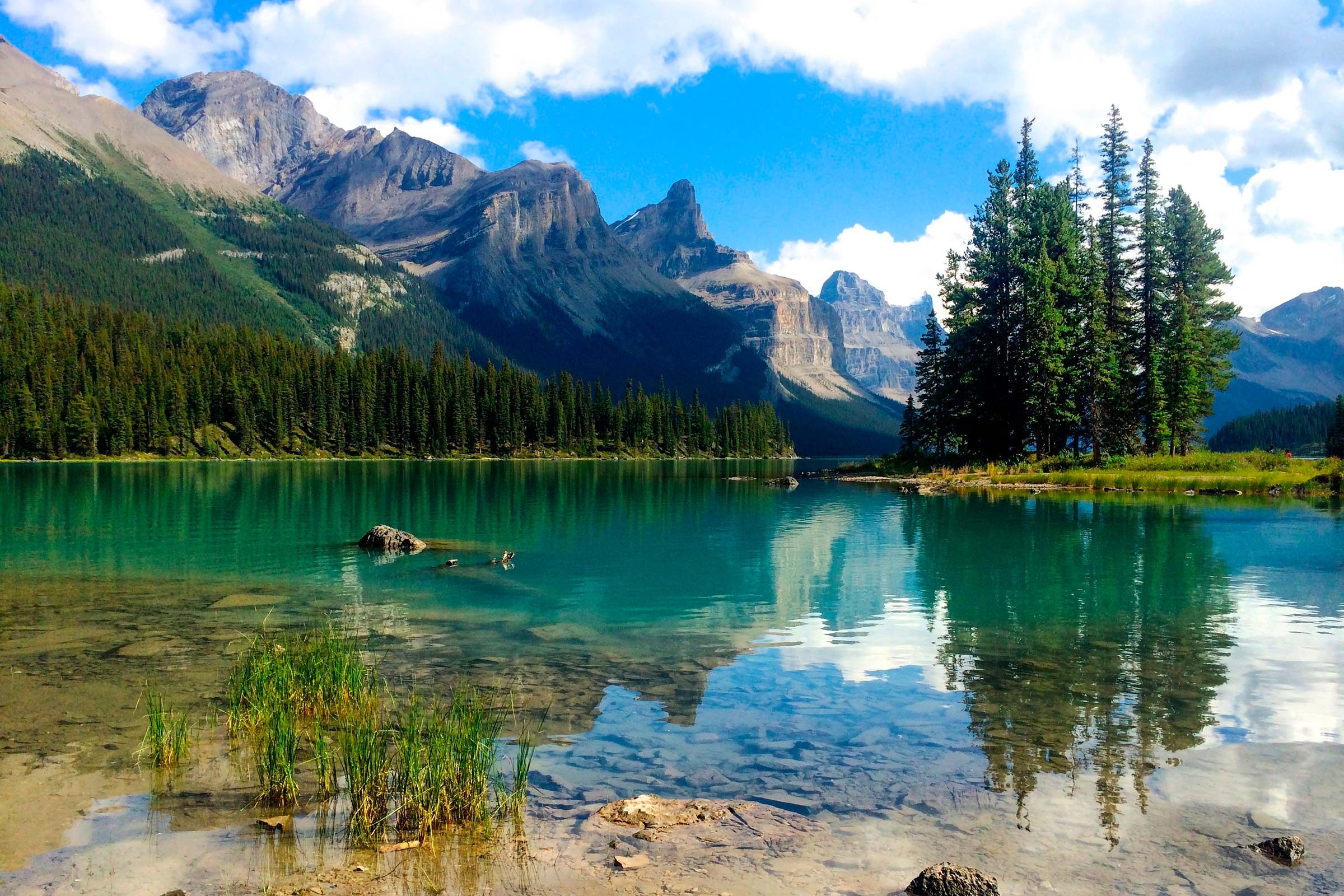 One summer I placed a bet on the Rockies and won. Over six days and 1,400 miles I was sure my two young boys, Finn and Zevin, then 7 and 5, would love this ambitious road trip chock full of grand adventures through the Rocky Mountains of Alberta, Canada.

The drive along one of the country’s most scenic highways promised gorgeous views of gemstone lakes and towering mountains. This region is home to three of Canada’s most beautiful national parks—Banff, the first and most visited; Jasper, the most northern of the parks with glaciers and diverse wildlife; and Elk Island, where endangered plains bison and wood bison roam.

An hour out of Calgary, we found ourselves among beautiful foothills that serve as the Rockies’ scenic entryway: the Kananaskis region. For a rare and highly valued moment, the boys were speechless. Mountains surrounded them for the first time ever.

Photo by Jenn Smith Nelson, Regina, Saskatchewan
And it was official—we had arrived in bear country! Although we hadn’t seen any, signs were everywhere, serving as reminders to stay safe. From the security of our van, we scoured the thick forests in the hope of spotting a grizzly bear. It had been at least 10 years since I had seen one in the wild, and I hoped for all of us that we would spot one—from a safe distance, of course.

After making it to our campsite at Sundance Lodges’ Kananaskis Campground, we unloaded our van and all of our camping gear. Once settled, the boys hopped on their bikes and darted down trails winding in and out of deserted campsites while I walked behind. We took a backcountry trail that led to a cliff and a sweeping view of magnificent Mount Lorette.

With tons more tolerance for the cold temps than I had, my carefree sons skipped stones and played in the Kananaskis River’s chilly glacier-fed waters. I relished the moment, pausing to soak it all in. Our special day was topped off with time around the campfire roasting marshmallows and then cuddling within the cozy confines of a heated tipi on the campground.

Photo by Jenn Smith Nelson, Regina, SaskatchewanThe trip kicked into high gear again the next day along the alpine hiking trails of Sunshine Meadows, just outside the town of Banff. A ski hill in the winter, the area straddles the provincial boundary between Alberta and British Columbia and offers clear views of some of the Rockies’ highest peaks. In summer the wildlife is abundant, the flora rich and the hiking amazing. The boys took in another first: a guided two-hour hike to Rock Isle Lake. Jovial, excited and awakened by the freedom to run, they dashed up the trail. We spotted a pine marten, found a recently overturned rock where a bear had been digging for flower bulbs, and we interacted with an entertaining ground squirrel. It was an easy introductory trail.

Few road trip routes compete with the constant unmoving beauty found while driving this stretch of country. The road between Banff and Jasper, known as the Icefields Parkway, has been recognized many times as the most scenic drive in the world. This was noted within our van as collective gasps filled the air, growing in volume, especially as we neared Jasper National Park.

By 9 a.m., we were suddenly transported from summer to winter with a visit to Jasper’s Columbia Icefields, the largest icefield in the Canadian Rockies. Whisked away via Terra Bus, my awestruck boys were delighted with its monster truck appeal, thoroughly enjoying the ride over to the Athabasca Glacier.

Standing on 200 million tons of ice, more than 900 feet thick—or as high as the Eiffel Tower—was completely surreal. I proved to be Mother of the Year as my boys refused to wear boots and instead opted for flip-flops. On the ice. We explored the barren, white landscape beside a host of tourists who were better prepared for the cold conditions than we were, wearing winter gear and filling empty water bottles with fresh glacier water found trickling down icy crevasses.

After a short bus ride we arrived at Glacier Skywalk. This glass-floored observation platform 918 feet in the air juts out 100 feet from the side of a mountain. The only thing that separated us from the glacier-formed valley and waterfalls below was glass. Fog that morning was thick and the platform slick. My boys skidded and played around the curvature of this design marvel.

Our journey wound down the next day four hours east at Elk Island National Park outside Edmonton. Exhausted from our whirlwind adventures, we took it easy, biking a bit and then driving around admiring sweet marshy spots that are home to hundreds of bird species. We circled the bison loop and saw a few in the distance. On the way back to camp we got a closer look.

It was a standoff. A giant but docile male bison stood in the middle of the road. Studying us for a moment, he nonchalantly walked by.

Though we saw no grizzly bears, the bison experience made up for it. Sleeping under the bright stars that night, I realized I won my bet.

How to Clean Your Stove Top: Tips for Getting Rid of Grease and Spatter
I Thought a Stranger Was Going to Rob Us on Vacation. What He Did Next Changed My Heart.
10 Must-Stop Attractions for the Best Route 66 Road Trip