Trussing and Carving a Turkey

Trussing Step 1: Start by spooning some of the stuffing loosely into the neck cavity. Pull the neck skin over

Step 1: Start by spooning some of the stuffing loosely into the neck cavity. Pull the neck skin over the opening and secure it with a small skewer.

Step 2: Next, spoon more stuffing into the body cavity. If there’s a band of skin that crosses the tail, slip ends of the drumsticks under it. If not, tie drumsticks together with cotton string. Tuck the wing tips under the back.

Step 2: Remove the wings by cutting through the joints where the wing bones are attached to the back. Carve the breast meat into thin slices. (The slices still will be attached at the bottom.)

Step 3: Loosen the breast meat slices by making a cut horizontally into the breast. To serve the remainder of the breast, cut smaller slices following the arc of the breastbone on each side of the bird.

Step 4: If you want to slice the meat from the drumsticks, hold the drumstick upright, large end down. Slice the meat parallel to the bone, working the knife under the tendons. Rotate the leg, as necessary to get even slices. 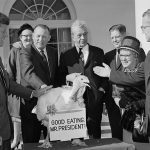 This Is Why the President Pardons a Turkey Every Thanksgiving 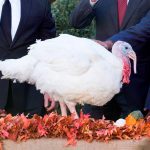 What Happens to the Turkey Pardoned by the President?