Americans feel more unity with those in their local communities, even as they see the country as divided as ever. 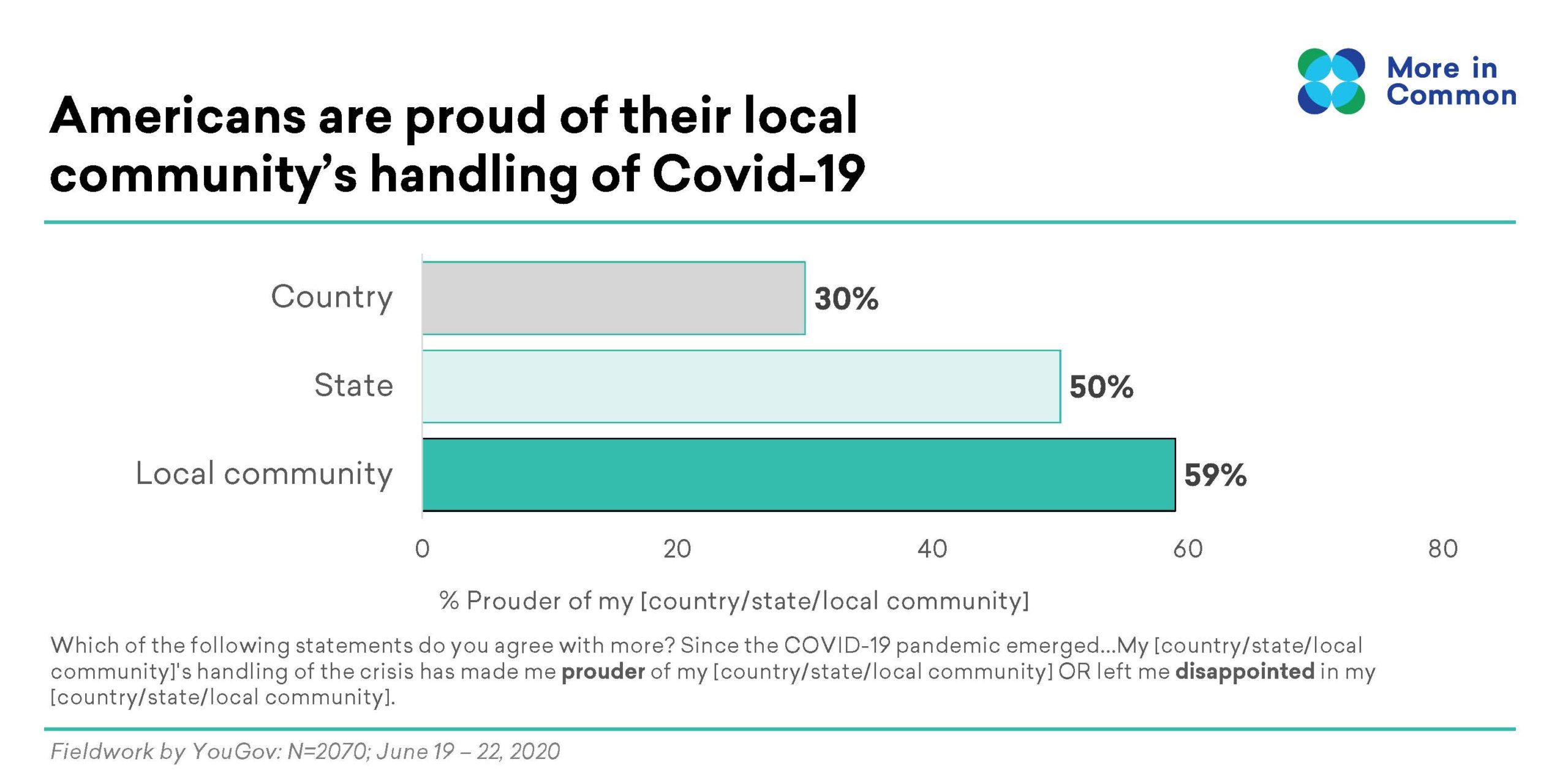 A strong majority of Americans are proud of the way their local communities have handled the challenges of 2020, even as they remain deeply divided about the response on a national level, a new survey from Reader’s Digest and More in Common shows. Local communities provide a beacon of kindness and competence for Americans across the nation, the poll found.

Three in five Americans say they feel “more proud” of their local community since the COVID-19 pandemic and protests against racial injustice swept the country. That is twice as many as feel proud of the nation as a whole over the same period. And Americans also expressed immense gratitude for essential workers, health care workers, and emergency personnel in their local communities. Local leaders also have the highest net trust levels for providing reliable information on the pandemic, followed distantly by national leaders. 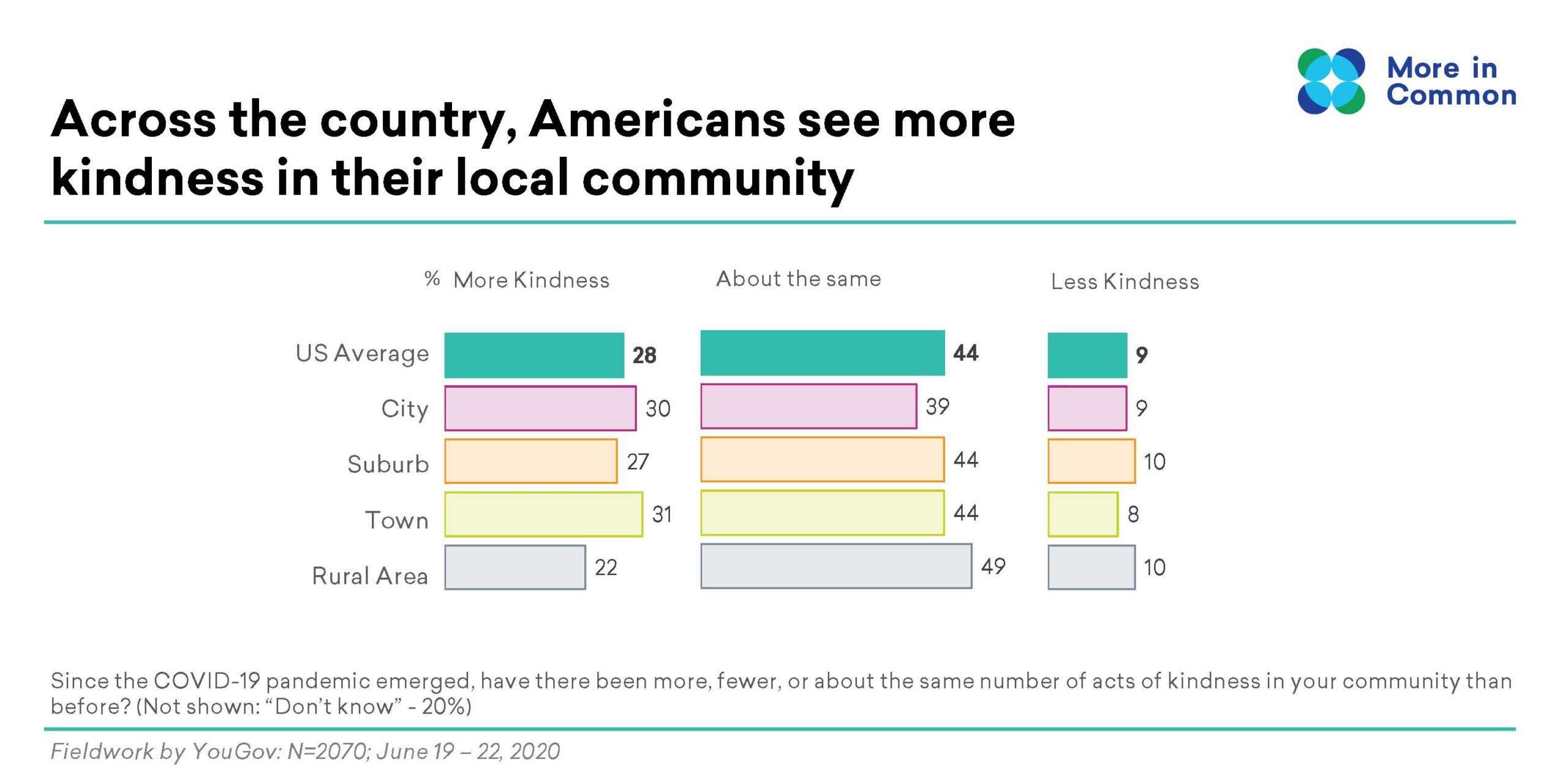 Courtesy More In CommonThis hidden recognition of unity within our local communities is shared by urban, rural, and suburban residents and by Americans across partisan, racial, and age divides, according to the Reader’s Digest/More in Common poll. It was conducted by YouGov with a representative sample of 2,070 American adults on June 19-22. (The margin of error for the survey is +/- 3 percent.)

“These are hard times for Americans, and people are feeling many fears and frustrations,” says Dan Vallone, U.S. Director of More in Common, a nonpartisan civic nonprofit committed to building a more united America. “But more than anywhere else, they are finding in their local communities reasons for hope.”

Just two months later, our research finds that, once again, 82 percent of Americans say the nation as a whole is more divided than united. The new data reveal a widespread sense of distrust and disappointment in our business and media institutions and national leaders, and in other Americans, as the initial, united response to the pandemic gave way to politics. According to the survey:

Americans also say they want a far different atmosphere nationally. When asked what the country needs to focus on the most, the number one priority chosen by Americans is that we should “become more united.”

Why do our local communities give us hope?

Seeing the support being offered in our local communities by our neighbors, helping organizations, and local leaders is keeping American optimism alive in the midst of a sense of national exhaustion. The survey found that 70 percent of Americans agree that the pandemic has reminded us that we are fundamentally the same. Those critical reminders are coming largely from the good things people are seeing around them.

Since the pandemic began:

These tangible local positives may make it easier for many Americans to avoid sliding completely into the “we are divided” mindset that drives thinking nationally, especially when the nation is facing not only a pandemic but protests, recession, and a bitter fight in the upcoming general election.

“Americans are struggling right now and there is real pain and exhaustion in our country,” Vallone says. “But more than anywhere else, they are finding hope in acts of kindness, gratitude, and support in their local community. What they find on their street feels much more positive than what they see on their screens.”

Clearly, we feel more hopeful when we think about our local communities. Some 76 percent of Americans said their community does not feel more divided since the pandemic. 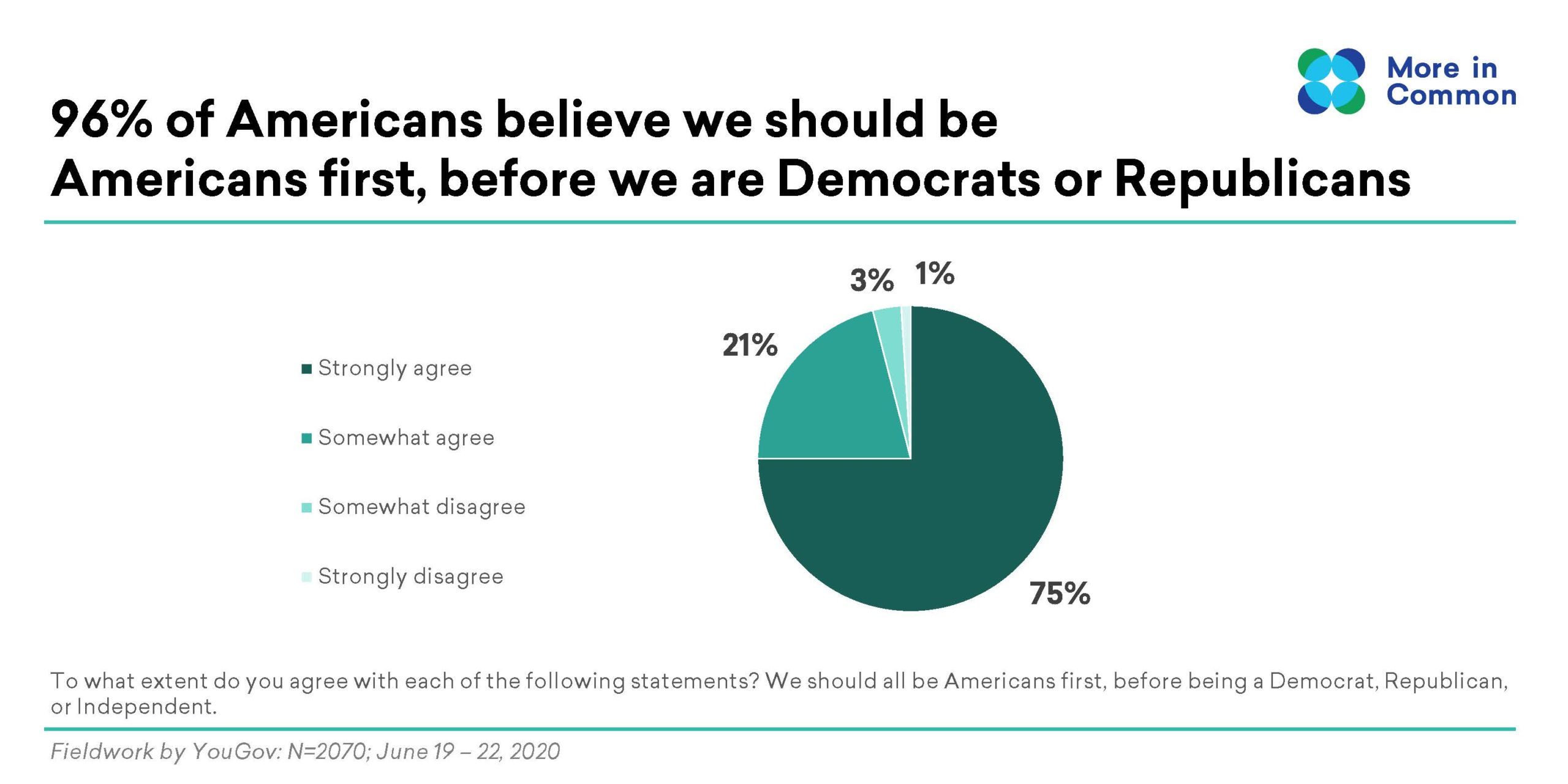 Courtesy More In CommonWhere we all agree: The bedrock principles of American unity

It’s amazing how nearly all of us agree with each other, researchers say, when we are asked simple questions about what we believe. This survey found the following:

Yet, Americans have a much harder time tapping into those commonalities outside of the local context. Only 1 in 5 Americans feel our country will emerge from 2020 more united. The message that emerges from the study is that we can’t wait for someone else to resolve our divisions. The work of re-building a more united America starts at home—in local streets, neighborhoods, and communities.

Reader’s Digest and More in Common undertook this research in conjunction with Reader’s Digest’s Nicest Places in America 2020: United in Kindness search, which found communities in every state where Americans are coming together. Joining with neighborhood platform Nextdoor, readers submitted a record 1,177 stories of solidarity and hope in 2020, with every state represented in the 50 honorees selected as America’s Nicest Places. (Want to learn more about the Nicest Place in America in 2020? Read about Buchanan, Michigan, the town that would not be defeated.) 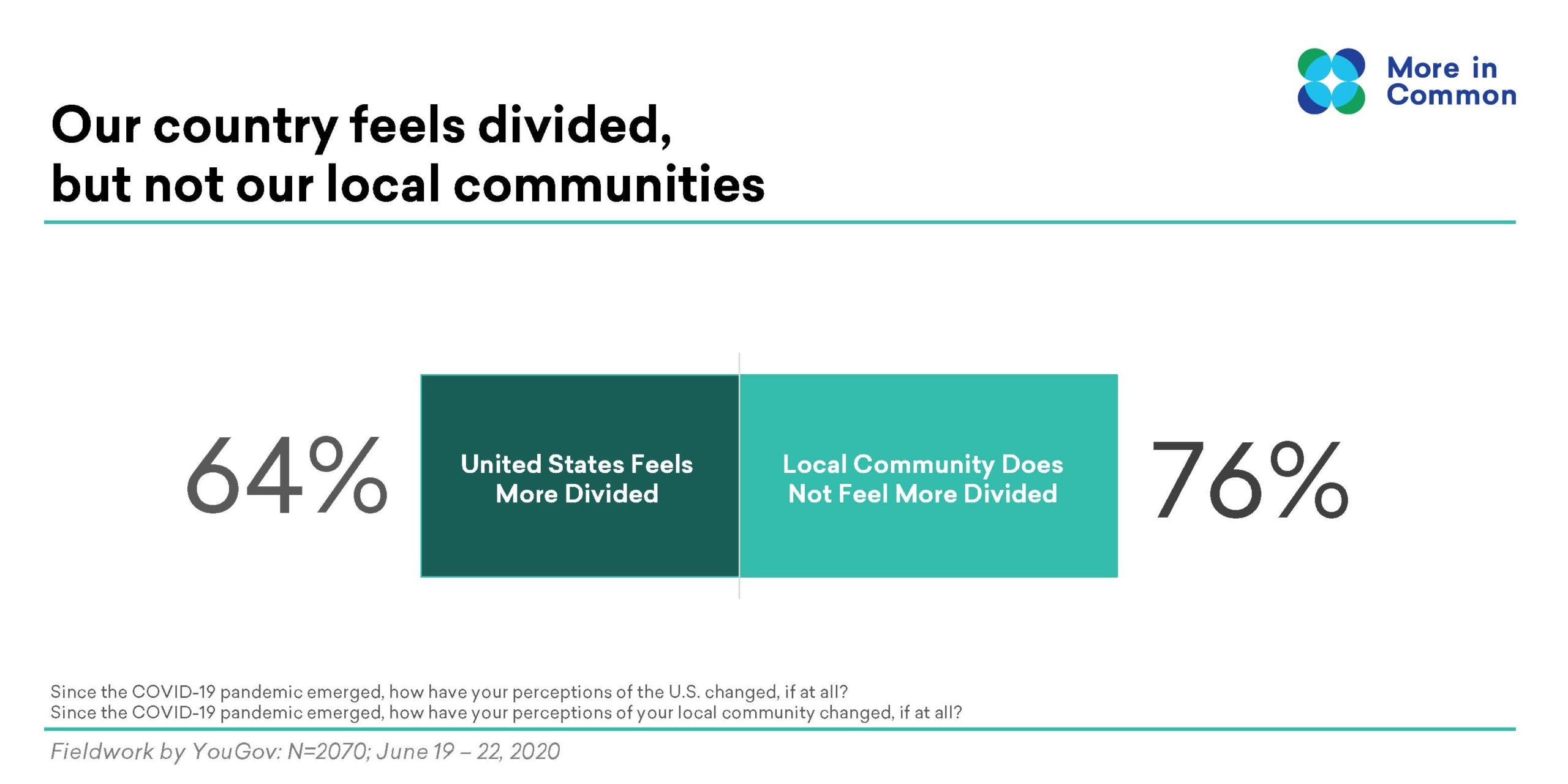 Courtesy More In CommonMore in Common’s Vallone sees these stories of kindness in the face of COVID-19 and racism as an essential partner to the quantitative survey results. “The work Reader’s Digest is doing to collect and preserve these stories of kindness and humanity has even greater importance at this time to serve as a reminder that we are all in this together,” he says.

Walmart’s Final Black Friday Sale Is Here (with Deals for Days)
These Are the 50 Nicest Places in America, According to Our Readers
BBC Finds Hope for Unity in Reader’s Digest Nicest Place in America