Lidar—a high-tech cousin of radar­—uses light waves to peel back the layers of time. 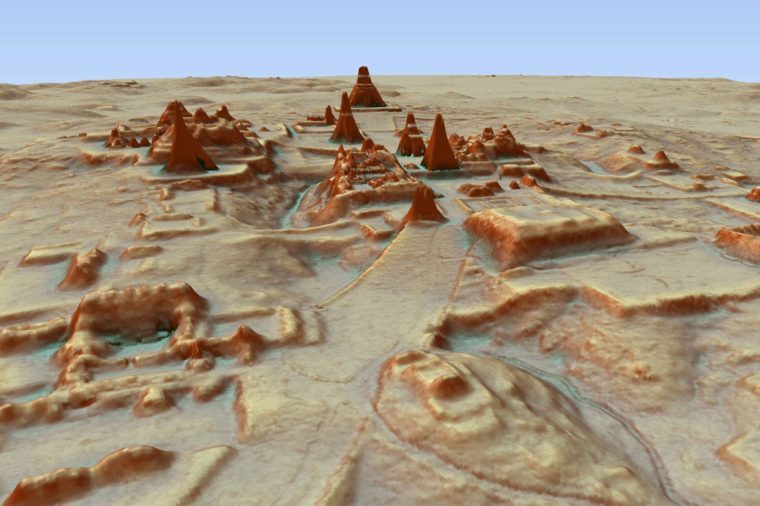 We usually think of archaeology as involving intrepid explorers and lots of painstaking digging. But today, long-hidden cities are being revealed from the air, where modern archaeologists use laser beams to spot evidence of ancient life buried beneath thick vegetation.

Lidar, short for “light detection and ranging” (and a cousin of radio-based radar), involves directing a rapid succession of laser pulses—between 100,000 and 400,000 per second—at the ground from an airplane or a drone. Software captures the time and wavelength of the pulses reflected from the surface and combines it with GPS and other data to produce a precise three-­dimensional map of the landscape below. These high-tech explorations have revealed long-buried Mayan cities, including Tikal, in the dense jungle of Guatemala, and Caracol, in Belize.

In recent years, lidar exposed a sprawling ancient city in western Mexico called Angamuco. The discovery of this long-lost Mexican metropolis is especially significant. Built by the Purépecha, who were rivals of the Aztecs, Angamuco was a major civilization in the early 16th century, before Europeans arrived. Find out the weirdest discoveries archaeologists have made.

“To think that this massive city existed in the heartland of Mexico for all this time and nobody knew it was there is kind of amazing,” says Chris Fisher, an archaeologist at Colorado State University who led the expedition.

The city extended over ten square miles before it was covered by a lava flow. “That is a huge area with a lot of people,” says Fisher. “You are talking about 40,000 building foundations, which is [about] the same number of building foundations that are on the island of Manhattan.”

Archaeologists were surprised when they saw Angamuco’s city plan. The Purépecha’s monuments—the city’s pyramids and plazas—were largely concentrated in eight zones around the edges rather than being located in one large center. Why this almost Los Angeles–type sprawl? Historians want to know the answer to that too.

The revelation of Angamuco is a prime example of the power and promise of lidar. Archaeologists discovered signs of the buried city in 2007 and initially attempted to explore it using a traditional “boots on the ground” approach. But the team soon realized that with the rugged terrain, it would take at least a decade to outline the entire metropolis.

In 2011, they began using lidar to map nearly 14 square miles, revealing an astonishing array of features, from pyramids and temples to road systems, garden areas, and even ball courts. This gave them the “map” they needed to know where to explore further. So far, Fisher and his team have verified more than 7,000 architectural features over a 1.5-square-mile area, with excavations undertaken at seven locations. The earliest artifacts include ceramic fragments and other remnants dating as far back as AD 900.

All told, researchers now believe that more than 100,000 people lived in Angamuco from about AD 1000 to AD 1350. That makes it the biggest city in western Mexico at the time—or at least the biggest city we know about so far.

“Everywhere you point the lidar instrument, you find new stuff,” says Fisher. “Right now, every textbook has to be rewritten, and two years from now, [they’re] going to have to be rewritten again.”

Next, check out the most mysterious archaeological treasures on Earth.