Your Guide to a Utah Road Trip

Discover unimaginable, other-worldly scenery on a road trip through this state with five National Parks.

If you’re looking for a vacation unlike any other where you can get into the outdoors, see dramatic landscapes that seem like they are from another planet, and check five (or more!) of the U.S. National Parks off of your bucket list, consider a Utah road trip. This great Western state is often overlooked but offers some of the most spectacular scenery you’ll find in the United States.

While you can certainly drive to Utah, the trip may be a bit long for those with an Eastern or Midwestern home base. Instead, you may want to fly to the area, rent a car or RV, and then begin your Utah road trip. Las Vegas is often the gateway to Utah’s National Parks, as it’s just 160 miles from Zion National Park and certainly within driving distance to Bryce Canyon, Capitol Reef, Arches, and Canyonlands by Moab on the eastern side of Utah. Plus, it’s always fun to spend a few days in Las Vegas on the front or back end of your Utah National Parks road trip.

Alternatively, you can fly into Salt Lake City. Find out the 15 best cars to rent for a road trip.

What to see and do in Utah

There are five glorious Utah National Parks to explore, known as the Mighty 5 and each unique in their own right, offering spectacular sites from the iconic Delicate Arch in Arches National Park to the epic and nail-biting Angels Landing hike and popular The Narrows hike, wading through the Virgin River in Zion National Park. 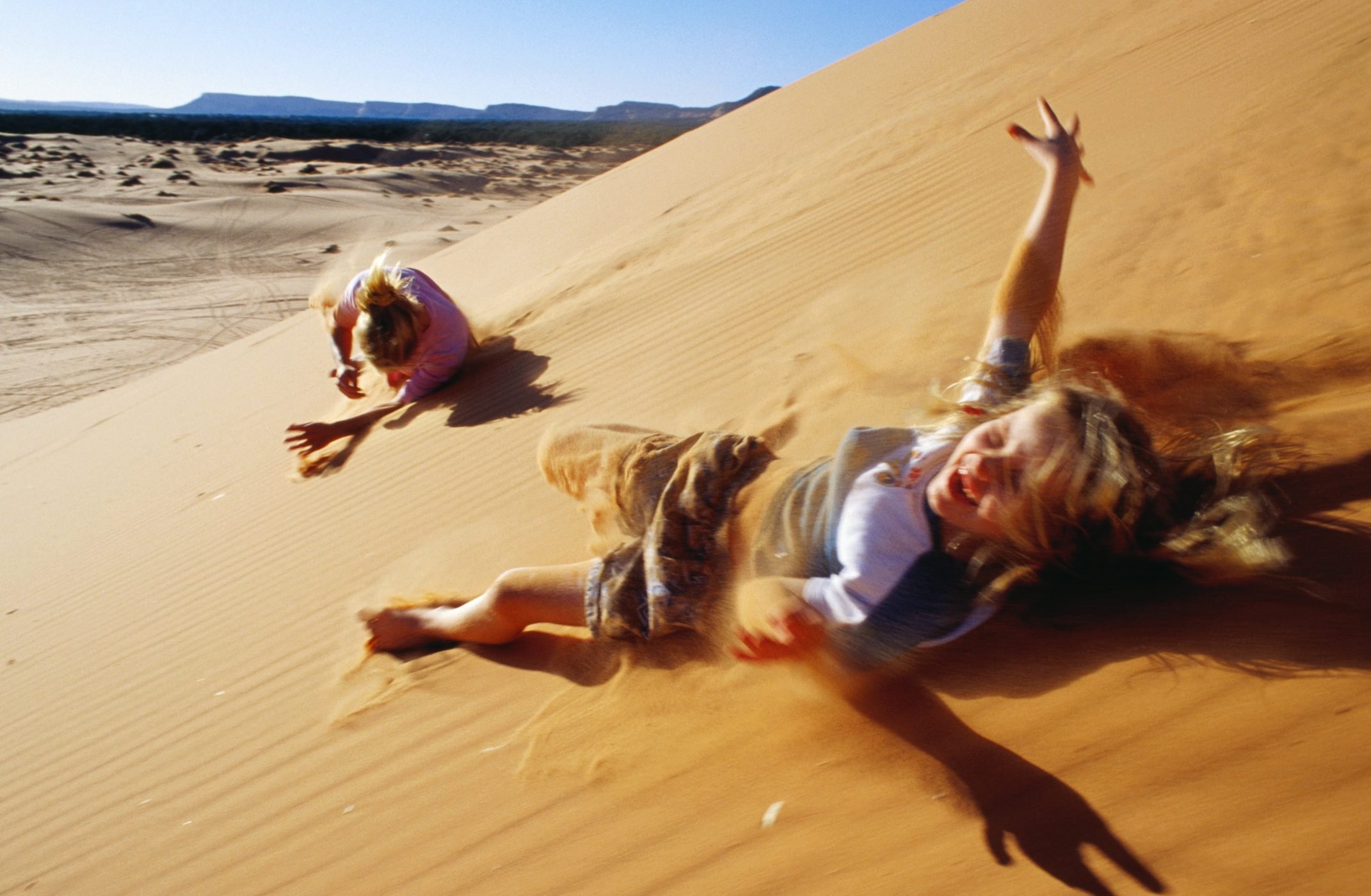 Moab is known as one of the top adventure towns in the world with two National Parks nearby and endless mountain biking, hiking, and off-road vehicle trails for the outdoor adventure enthusiast. Kanab, which is close to Zion and Bryce Canyon National Parks, is also a great stop with many hiking opportunities, the Little Hollywood Museum with Western film sets, and near the amazing Wave geologic formation, which requires a competitive permit by lottery to access. The Glacier National Park road trip is another popular route in the western half of the United States.

To see the spectacular sites of southern Utah and stop at all five National Parks, fly into Las Vegas, and then drive approximately four hours east to Kanab via Interstate 15, eventually hitting U.S. Route 89A. From here, you can access Zion National Park, only 30 miles away, as well as the North Rim of the Grand Canyon south in Arizona, which is about 80 miles south on 89A. It does close during winter, so ensure the entrance is open before you arrive.

After taking in Zion and the Grand Canyon, head north on 89A to Bryce Canyon National Park, famous for its unusual “hoodoo” formations, about 75 miles away.

Next, on your Utah National Parks road trip is Capitol Reef National Park, which is northeast by about 110 miles and takes you along Utah’s Scenic Byway 24, which in part feels like you’re driving across the moon (there’s even a Mars Desert Research Station there) and which features a quarry holding hundreds of Jurassic period dinosaur bones. Capitol Reef is defined by its soaring red sandstone cliffs with opportunities to hike to natural bridges and arches like Cassidy Arch, named for outlaw Butch Cassidy who grew up in the area. Don’t miss the chance to stop at his boyhood home in Circleville along U.S. Route 89A.

After Capitol Reef, make your way to Moab, which is about another 130 miles along Byway 24. Hang out in Moab for three to five days, taking your time to explore Arches National Park, as well as Canyonlands National Park, which is divided into two sections each with their own entrances. Dead Horse Point State Park is also nearby, and kids will love the opportunity to search for real dinosaur footprints that are more than a hundred million years old in outlying areas.

From Moab, you can fly out of Grand Junction, Colorado, the nearest major airport, or make your way back to Las Vegas, about a seven-hour drive.

Where to stay in Utah

If you’ll be doing lots of hiking or mountain biking in Utah, opt for accommodations that have free breakfasts for fuel before a day expending lots of calories, as well as options with fridges, microwaves, kitchens, laundry facilities, and room to spread out with all your gear. 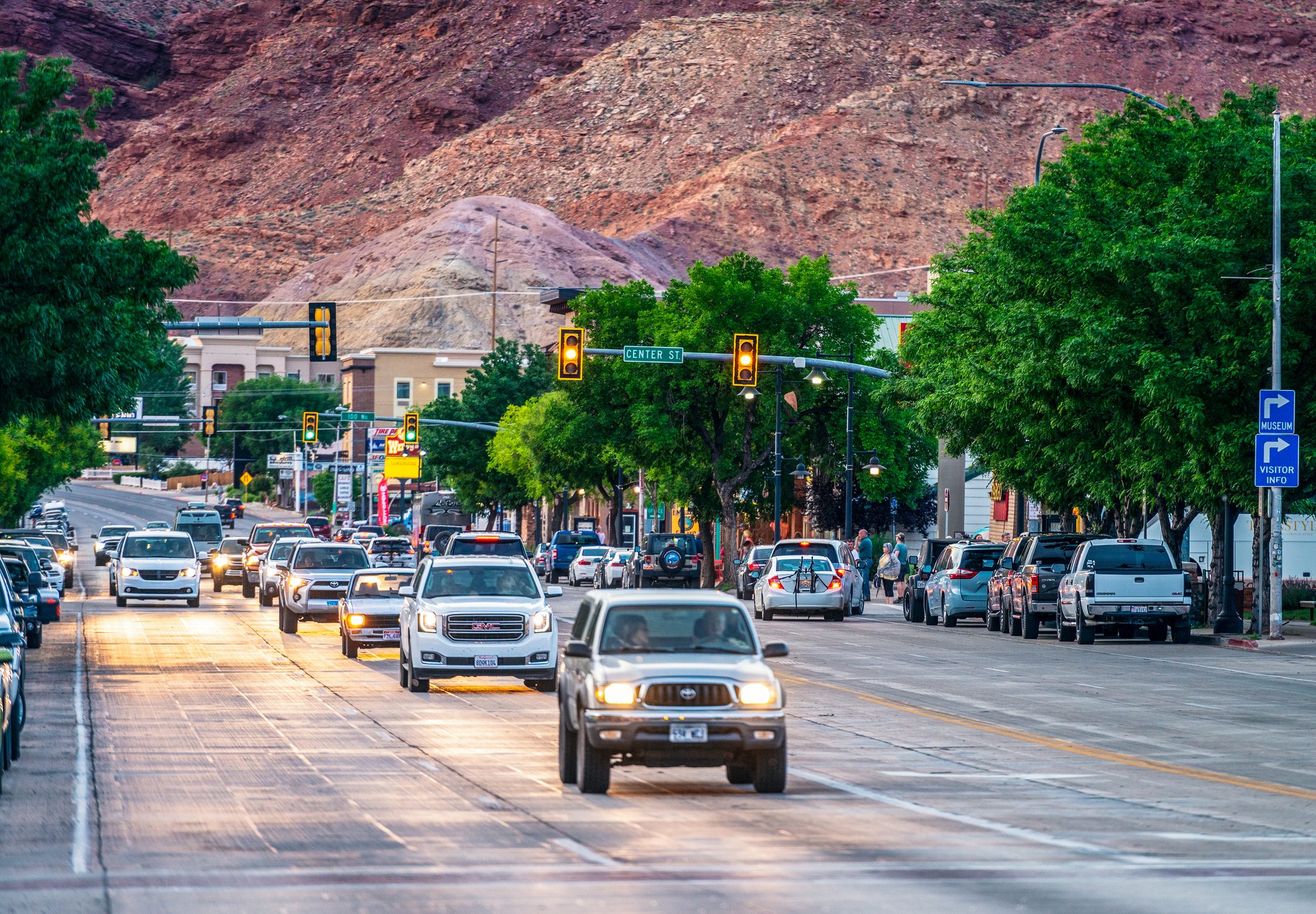 In Kanab, consider the Hampton Inn Kanab with guest laundry, in-room mini-fridges and microwaves, and daily free breakfast. In Moab, the Homewood Suites by Hilton Moab is right in town with local restaurants and shops just outside your door, as well as a hearty free breakfast, rooms with two sets of Queen-size bunk beds, separate living and sleeping areas, as well as full kitchens for making sandwiches for your day on the go.

Where to eat in Utah

In Kanab, there are a handful of dining options, but check opening days and hours, as they fluctuate with the season and may close earlier than you expect. Good options include Escobar’s Mexican, the Rocking V Cafe, and Cordwood at Zion Mountain Ranch.

Moab is a much larger town full of adventure enthusiasts with many more restaurant options. Some great picks are Moab Diner, Moab Brewery, Pasta Jay’s, and Blu Pig barbecue.

Beware that on your Utah road trip, restaurants are few and far between outside larger towns, so eat before you depart or bring sandwiches in a cooler and enjoy a picnic at a beautiful outlook. You’ll also want to have your car stocked with these best road trip snacks. 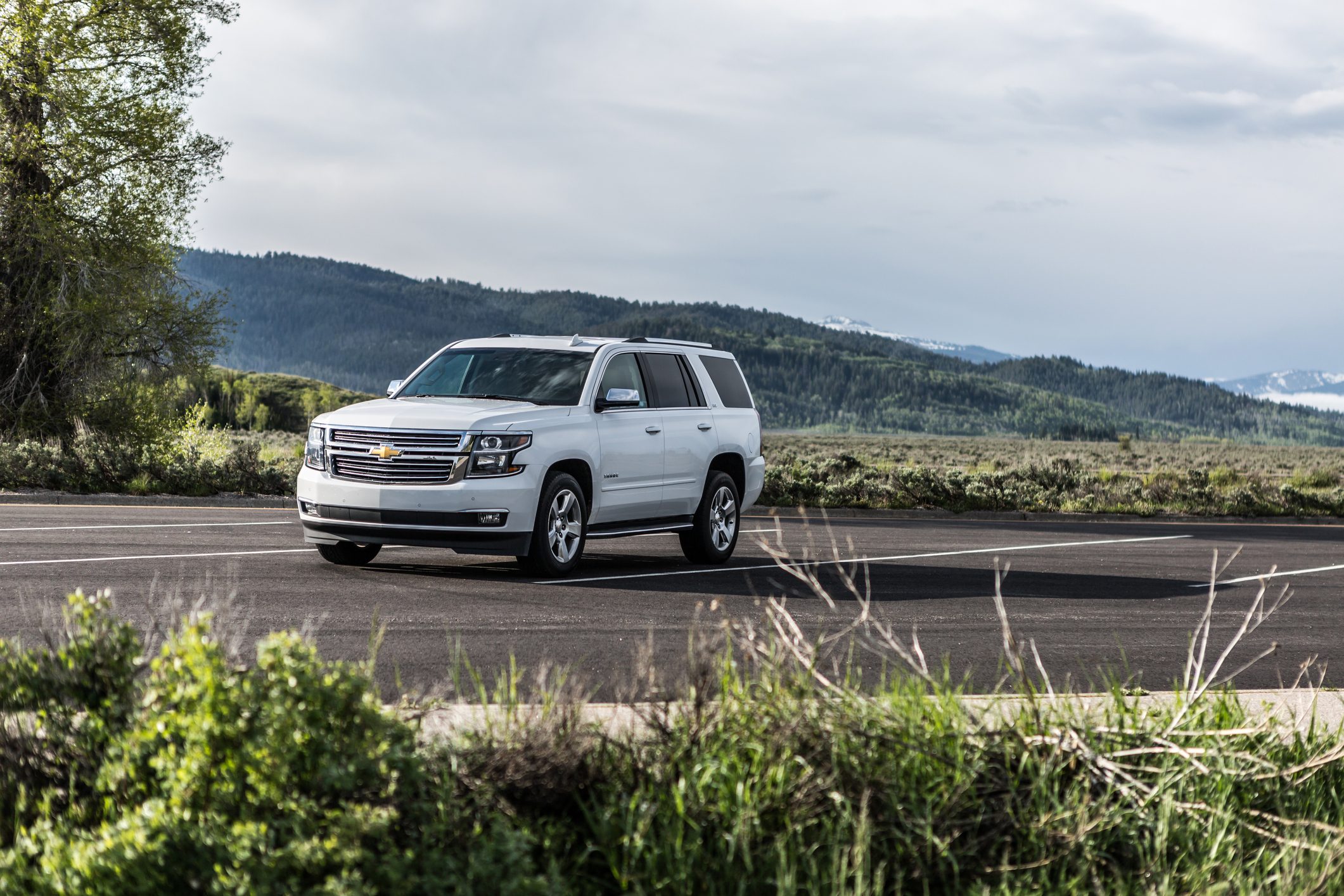 You’ll want an SUV-type vehicle that can handle some bumpy dirt roads comfortably while offering lots of space to not only spread out for hours-long drives but to hold coolers, backpacks, suitcases, hiking gear, groceries, and more. A spacious option for families is the Chevy Tahoe, whose 2021 model claims the most interior space of any SUV with 60 percent more room in the back for cargo along with lots of safety features like multiple camera views to help you navigate out of tight spaces, a common issue among Utah’s canyons and rocks. Its independent rear wheel suspension system also makes for a comfy ride whether you rent or buy. These are more of the best cars for road trips.

What to bring with you

You’ll be in the great outdoors much of the time along your Utah road trip so be prepared. A walking stick can be helpful for navigating the constant uneven rocks on hiking terrain, as well as a supportive backpack, high-quality hiking shoes that can weather lots of sharp rocks, hats to block the sun, and multiple clothing layers to adapt to cooler mornings and hot afternoons.

Be sure you have a refillable water bottle or plenty of water to stay hydrated in this often hot climate, and a printed map is also a good idea, as you’ll frequently find yourself without cell service or access to GPS. 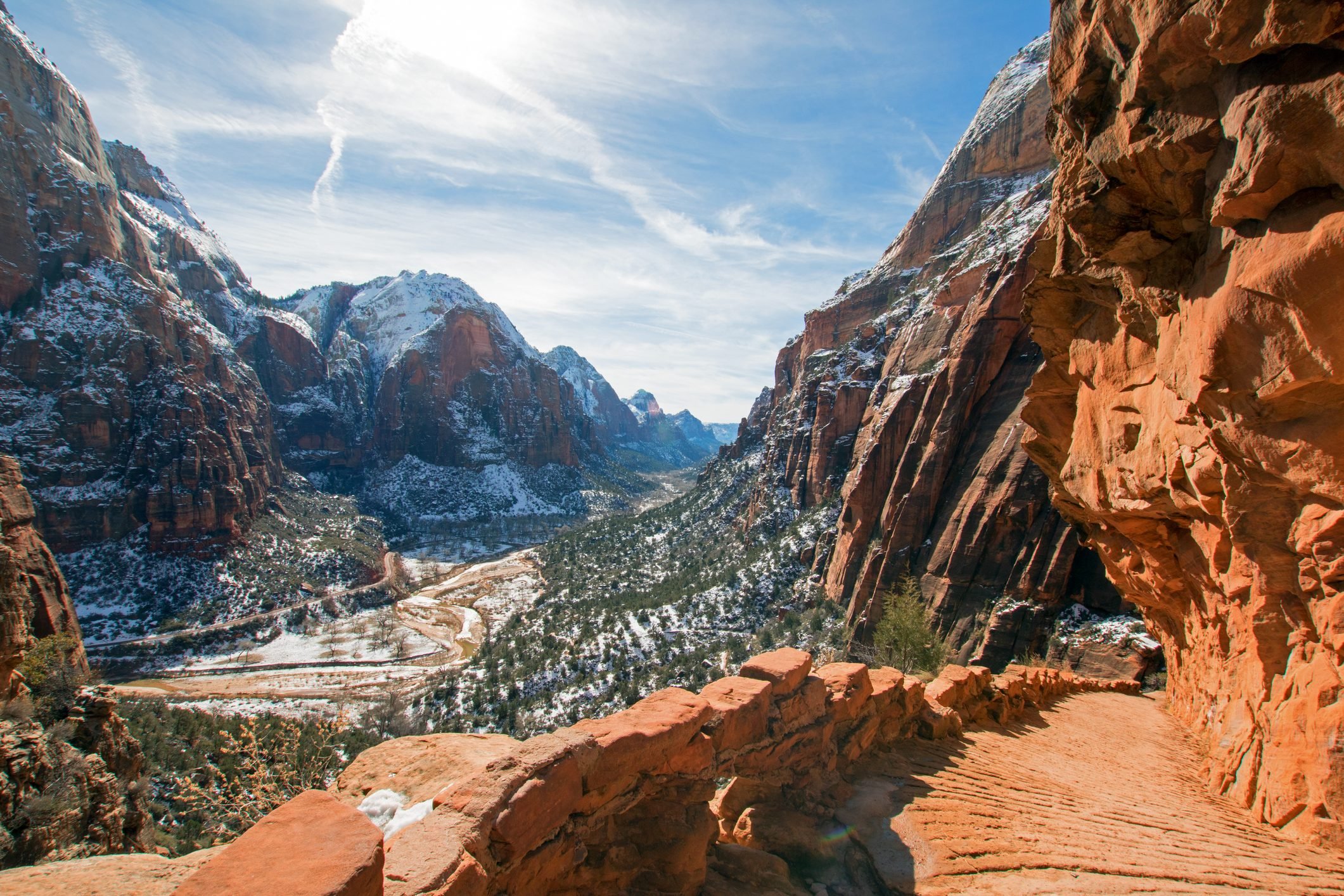 Best time of year to go

You likely want to skip the summer months in Utah, where it can get unbearably hot and many families are traveling. Spring can be a quieter time of year at some parks, though at higher elevations like Bryce Canyon you may encounter snow and also a lack of infrastructure like open restaurants during the off-season. At Zion in spring, The Narrows hike likely won’t be an option, as the Virgin River is too high to wade through.

Fall may be your best option, as plenty of hotels and restaurants remain open, temperatures are pleasant and snow has not yet arrived. Autumn can, as a result, be busy with lots of traffic in Moab especially. Avoid the National Parks on weekends and arrive in the late afternoon to help alleviate parking and traffic congestion. These are more of the best spots for fall foliage across America.

Winters can also be mild with few crowds and the occasional snow in lower elevations, making a lovely contrast between the gleaming white snow and red rocks, and cool conditions for outdoor adventures. Looking for more road trip inspiration? No matter what time of year it is, these are the 15 best national park road trips to take all year long.

Your Guide to a Mount Rushmore Road Trip

Your Guide to a Glacier National Park Road Trip

Lyn Mettler
Lyn Mettler is an Indianapolis-based lifestyle writer, who has written for MSN.com, US News & World Report, FoxNews.com, TODAY Show online among others. She blogs about how to travel for less using miles and points on GotoTravelGal.com and is the author of "The Step-by-Step Guide to Earning Your Southwest Companion Pass."

Your Guide to a Great Northern Road Trip