Dale Maharidge's angry father left few clues as to what happened to him during World War II. So Dale embarked on a 12-year quest for knowledge, understanding—and healing. 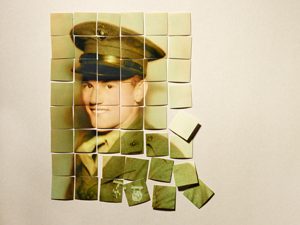 Levi BrownOne summer weekend when I was a boy, my father took my brother and me camping. I vividly remember the odor of cooking bass mixed with wood smoke, the splash of the Milky Way in the heavens, and the burning ember of Dad’s unfiltered Lucky Strike against the night. Even then, I knew how hard Dad was trying at this enormous thing, to be a father. But I also recall the innumerable times he’d erupt in screaming fits after one of us kids did something as innocuous as spilling water at dinner; sudden noises also triggered outbursts. It was as if there were two guys at war inside him. Why was he like this?

Sgt. Steve Maharidge, my father, served as a U.S. Marine in the Pacific Island battles of World War II. When he came home in 1946, our family settled into what looked like the ideal postwar life: two parents, three children, a split-level house in suburban Cleveland. But we had a family secret: Dad’s rage.

Like most men of his generation, my father didn’t discuss the war. Yet it was ever present in a photograph, which hung in our basement, of Dad and a buddy on a jungle island. Only once, when Dad was on painkillers following a car accident, did he talk to me about the man with him in the photo. “They said I killed him! But it wasn’t my fault!” Instinct told me not to ask questions, and the only other thing my dad revealed was that whatever happened had occurred on Okinawa.

My father died on June 30, 2000. Two days later—maybe it was my midlife crisis—I set out to learn about his war. I was in my mid-40s and needed answers: Who was that guy in the photo? What had happened to Dad on Okinawa? I had absorbed a lot of Dad’s anger, and now I needed to let it go. By facing his demons, I thought, I would also face my own.

The quest would prove the most difficult in my three decades as a journalist. For the next 12 years, I looked for the men who’d served with my father in L Company, 3rd Battalion, 22nd Marines. I started with the names of the 22 guys who had signed my dad’s silk rising-sun flag, and then got the company’s muster roll, which listed more than 400 men. One by one, I sought them all, abandoning my project only during my mother’s terminal illness so I could take care of her. After she passed away, I continued making hundreds of phone calls, eventually talking to 29 survivors. A World War II story emerged that I’d never heard before.

The silent generation was finally speaking. 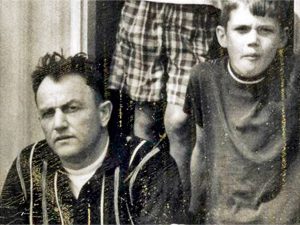 “Is this the Mr. Joseph Rosplock who was on Okinawa in World War II?” I asked the man who answered the phone.

“Whadya want him for?!” he asked with hostility. It was 2009, nine years into my search, and I had befriended some of the guys my dad fought with. When a few of them died, it was like losing my own father again. Now I had worked my way down the roster to Rosplock, who lived a few hours away from my home in New York City.

I told Rosplock what I’d learned about the man in the photo with my dad: His name was Herman Walter Mulligan, and he was killed on May 30, 1945, after he threw a grenade into a tomb on Hill 27 near the city of Naha on Okinawa. Enemy machine gunners were believed to be inside. But the crypt actually concealed a ton of Japanese munitions. It blew up.

There was a long silence.

Rosplock spoke in nearly a whisper. There was tremendous pain in his words—about the explosion, about his life. Rosplock had watched as a three-foot piece of the tomb’s roof landed on Mulligan. He’d carried Mulligan’s body to a truck.

We began a long phone friendship—often we’d talk for two hours. And he’d send e-mails, sometimes at 2 a.m. I wanted to visit him in person, but Rosplock wouldn’t have it. The phone was like a confessional, each of us remaining disembodied voices. Maybe that enabled us to be more honest.

Rosplock told me that, unlike my father, he was sent away to get help after the tomb blast. “For weeks, the only thing we did was quilting. If it weren’t for that, I probably would have lost my marbles. For a long time, if somebody just whispered behind my ear, I’d jump a mile high.”

During another call, Rosplock said, “Oh, Dale, I love you. I’m sorry I can’t be more helpful.” I said I loved him back and assured him that he was helping. After our conversations, he sometimes had nightmares about the war.

“I don’t want you to feel that you cause any bad memories coming back to me,” he said when I expressed concern. “I want to thank you. See, you have made me feel better because you let me talk about things that I never told anybody else.”

As each man I contacted recounted painful details of the horror they’d endured, I felt as though I were talking with my father. Not only were these men similar to him in demeanor—a tad gruff, yet also friendly—but they had experienced the same things.

“Oh, I wish I coulda seen Steve one more time,” a man named George Popovich said to me over the phone. “Did he tell you about the Japanese cave, the time we went in and ate their food? Ate tangerines, shrimp in cans. And we drank their sake.” Of course my father hadn’t told me that. Popovich died before I could meet him in person. 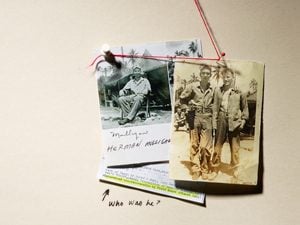 Levi BrownIt was Fenton Grahnert, from Vancouver, Washington, who gave me a big key to understanding my dad. Grahnert had been in a foxhole near my father during a battle at Sugar Loaf Hill; the men were blasted by artillery. “I kind of went off the deep end,” he said. “The next day, they sent me to the hospital with combat fatigue.”

My father, I learned, was also hospitalized, on May 16, 1945. But according to the records I tracked down, Dad was soon sent back to combat and suffered another concussion two weeks later at the tomb on Hill 27.

What Grahnert called combat fatigue is known today as blast concussion, and it can cause traumatic brain injury, or TBI.

With that information in hand, I sought out Douglas Smith, MD, director of the Center for Brain Injury and Repair at the University of Pennsylvania. I described the way my dad would explode over such minor things as spilled water. “For absolute certain, traumatic brain injury can do that,” Dr. Smith said. “TBI can almost manifest as emotional instability, an inappropriate emotional response.”
Dr. Smith explained that the brain is able to endure mild shocks without injury. But a concussion can cause irreparable damage by rupturing axons, which extend from brain cells and transmit electrical current. “If I take Silly Putty, make a cylinder, and pull slowly, it keeps stretching and gets thinner and thinner,” Dr. Smith said. “But if I take the same Silly Putty and pull rapidly, it snaps.” And that is what axons do if the brain suffers a severe concussion. “Once an axon disconnects, it cannot grow back together,” Dr. Smith said. “The damage initiates long-term nerve degeneration.” Multiple concussions like those my father endured can worsen TBI.

I finally had an answer as to why my dad was often enraged. Steve Maharidge had a head filled with snapped Silly Putty.

Our family just thought Dad was sometimes crazy. Mom died believing this. As a teenager, I had felt anger toward my dad because of his rage. But now that anger was gone, and I was left with love. I only wish I could have shared more of that love with him when he was alive. 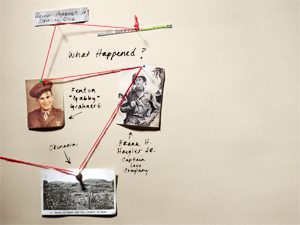 Levi BrownThe mystery of Mulligan remained. His body was never identified for burial. Why? And why was my father tormented by his death?

Despite sending out 250 letters, I’d failed to find any of Mulligan’s relatives. Finally, I tracked down Frank Haigler, the captain of L Company, in Southern California. Haigler had corresponded for decades with the families of men who’d been killed. In his trove of letters were those from Robert Owens, Mulligan’s grandfather. “Please let me know as soon as possible so I will know what to do,” Owens wrote on March 16, 1949. The government had declared Mulligan’s remains “non-recoverable.” Haigler didn’t have any answers then or now. But he had his original battle map.

Armed with a photocopy of the map and descriptions of the tomb’s location, I traveled to Okinawa. I brought a copy of the photo Dad kept in the basement.

Finding the tomb on Hill 27 was easy. Half the site had been rebuilt as a new crypt; the rest remained a crater overgrown with jungle vegetation. I visited nearly every evening for two weeks, wondering about the lost man.

None of the guys I talked with blamed my dad. So why was he haunted? I’ll never know for certain, but I suspect that as squad leader, Dad had ordered Mulligan to throw the grenade. Or that in my father’s frantic effort to stop the bleeding, Mulligan’s dog tags had fallen off. Or both. Without identifying tags, Mulligan was likely buried as an “unknown” at the Punchbowl national cemetery in Hawaii.

I would never be able to put a name on Mulligan’s grave. But while I was on Okinawa, I had another idea. During my visit, I’d spent time with a Japanese veteran, Yoshikuni Yamada, whom I had witnessed burning incense, giving offerings, and praying for a friend who had died in the battle. I could at least replicate Okinawan custom. I brought incense, a can of tea, a cup, flowers, and a mandarin orange with me on the last evening I went to the tomb.

When I showed up, a man was there, placing flowers.

“Konichiwa,” said the man, who told me in broken English that his name was Junichi Yamaguchi.

His family had rebuilt the tomb immediately after the war, he said. He was tending the home of his ancestors. I told him why I had come.

High in a tree towering over the adjacent blown-out tomb site, a frog or bird was crying an eerie wail.

I showed him my incense.

Yamaguchi nodded solemnly. “I pray with you.”

I set out the photo of my father and Mulligan, placing the tea and flowers as I’d watched Yamada do. Yamaguchi gently took the incense sticks and lit them. We kneeled.

“Herman Walter Mulligan, you died here May 30, 1945,” I said. “My father, Steve, was very troubled by what happened. I want you to know that you were not forgotten.”

The frog or bird gave a spooky cry. I went to shake Yamaguchi’s hand. Instead, he threw his arms around me in a strong embrace.

“Thank you,” he replied.