The Catholic church named its new pope this week—and he has a forthcoming ex-crush. This and more as we explore 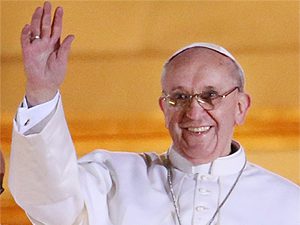 The Catholic church named its new pope this week—and he has a forthcoming ex-crush. This and more as we explore the week in weird:

• Did a romantic shutdown lead Pope Francis to God? Amalia Damonte, 76, says “yes.” According to The Week: “Pope Francis once declared ‘If I can’t marry you, I’ll become a priest’ after she rejected him during their childhood in Buenos Aires. ‘Luckily for him, I said no,’ she joked.” Damonte also claims that her parents kept them apart because they didn’t approve of the romance.

• Dennis Rodman keeps doing his thing: You’re killing me, Dennis! First, he appeared at the Vatican for the papal announcement—”It’s amazing that I’m actually doing all these amazing historical things now”—and now he’s headed back to North Korea to vacation with his buddy Kim Jong Un. Fox News reports that following his recent visit, Rodman views the murderous dictator as a “friend” and intends a return to the impoverished country this August.

• 106-year-old gets her high school diploma: Reba Williams never received her high school diploma because she refused to complete a final book assignment—she’d read it once and didn’t want to read it again, according to WFTV. At the urging of a retired teacher, the Mount Vernon, Ohio school board finally awarded the long-delayed diploma. The school superintendent delivered it to Williams at her apartment this week, along with a graduation mortarboard. Still: “Williams says she hopes current students realize that learning is important and that they probably shouldn’t follow her example.”

• Third-grade teacher gives kids lie detector test after candy goes missing: She’s definitely not Mrs. Goodbar. After noticing that candy was missing from her classroom at Dearington Elementary School in Virginia, a teacher used a smartphone app to see if her students were telling the truth about the incident. The app purports to use thumbprints for its tests—which is, of course, completely impossible and ridiculous. Students who “failed” the test were reportedly traumatized by the ordeal, and parents want the teacher fired.

• Dog eats 111 pennies, doesn’t die: Jack, a cute lil terrier, swallowed a large amount of copper-plated currency this week but was saved by a Manhattan veterinarian. Don’t try this at home, pooches!