The sequester may be this week’s most important news item, but automatic spending cuts and the Budget Control Act don’t 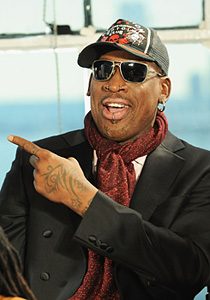 The sequester may be this week’s most important news item, but automatic spending cuts and the Budget Control Act don’t exactly make for juicy headlines. That is, of course, unless there’s a (botched) Star Wars reference involved.

• Dennis Rodman visits North Korea, praises ruthless dictator: It’s weird enough—almost too weird, really—that former NBA star Dennis Rodman landed in North Korea earlier this week to shoot some hoops and film a documentary, but the oddball athlete (who famously “married himself” in 1996) took things a step further Friday when he called dictator Kim Jong-un “an awesome kid.” Also in reference to the so-called supreme leader—who’s formally accused of crimes against humanity—Rodman added, “I love him.”

• President Barack Obama bungles a Star Wars reference: In response to a question Friday about forcing Republicans to make a deal on the sequester, Obama said, “I know this has been some of the conventional wisdom floating around Washington that, somehow, even though most people agree that I’m being reasonable, and most people agree I’m presenting a fair deal, the fact that [the Republicans] don’t take it means that I should somehow, you know, do a Jedi mind meld with these folks and convince them to do what’s right.” Any good nerd knows that a “Jedi mind trick” and a “Vulcan mind meld” are two entirely different things, of course. Twitter was quickly in an uproar about the sci-fi slip-up even as the economy began to curdle.

• Pentagon teaches frightening robot to throw cinder blocks: The truly freakish BigDog robot, which bounds over rough terrain like an undulating spider-horse monster, is now able to lift cinder blocks and hurl them at seemingly lethal velocity. Watch the video and sleep tight.

• Could Marvin Gaye prompt pandas to reproduce? A Scottish zoo hopes so, as they’ve begun playing soothing music (including “Let’s Get it On”) in an attempt to get panda bears in the mating mood.

• Experts say nightmarish New Jersey lamprey could be legit: Photos of a bloodied, gigantic sea lamprey that quickly generated over 1 million pageviews on Reddit probably aren’t just another Internet hoax. “Based on size alone, this does appear to be a sea lamprey,” a New York Department of Environmental Conservation spokeswoman told Outdoor magazine as reported in the New York Daily News, which added: “Sea lampreys typically measure up to about 3 feet, so the creature in the photos is either a very large specimen or something else altogether.” Spooky!