What Do Cats Dream About?

Cats seem to find the best places to take a cat nap, but do cats dream? And if they do, what do they dream about?

You’ve probably seen your cat curled up around the house taking a cat nap in patches of sunlight at all hours of the day. Cats spend a lot of their time sleeping—on average 12 to 15 hours—and it’s not because they’re lazy. We know that dogs dream, but do cats dream, too? What kinds of things would cats dream about, anyway? Here are 40 of the cutest photos of kittens sleeping.

It’s one thing to see a cat lounging on a chair, eyes closed. It’s another entirely to assume that cats can dream and have vivid imaginations. However, it turns out that cats can dream. “Research has shown that all mammals dream. During sleep, the mammalian brain needs to organize and arrange images from the day,”  Dr. Katy Nelson, senior veterinarian at Chewy, tells Reader’s Digest. “Scientists have concluded through studying rats’ brains that the level of brain activity while doing puzzles or navigating mazes is similar to the activity level measured during REM (rapid eye movement) sleep–the deepest level of sleep–proving that they do dream.” Cats seem to act a lot like humans—after all, they’re very vocal about being fed. Here are 17 things your cat would love to tell you.

Why do animals sleep?

After staying up late and having to wake up early, you learn pretty quickly how important sleep is for your health and well-being. Turns out, sleep is important for animals, too. “Understanding the process of sleep helps to explain dreaming. Sleep is a state of reduced consciousness characterized by reduced sensory and voluntary muscular activity,” says Dr. Nelson. “Sleep aids growth and the repair of body systems. During sleep, the brain seems to process information learned during the day, as well.” Here’s why cats love to sleep on you.

Do cats dream similar to humans?

You’ve probably woken up on numerous occasions remembering your dream and wondering what it meant. Does that mean cats have similar experiences? “During non-REM sleep, the brain takes images seen throughout the day and rearranges them in dreams to better process and understand what was seen. A similar scenario is how film editors take different video clips and arrange them to create a storyline,” Dr. Nelson explains. “When humans and pets actually ‘watch’ the edited footage is during REM sleep when the body’s serotonin system slows down. Serotonin’s primary job is to control large muscle groups, which is why we ‘go limp’ during REM sleep but can still have eyelids fluttering, feet moving, facial twitching, etc., because those are considered fine motor movements.” Here are 50 hidden meanings behind the most common dreams.

“As discussed above, there are two types of sleep: REM and non-REM,” says Dr. Nelson. “During REM, the sleeper’s eyes move rapidly and the brain’s activity is similar to an awake state. This is when dreaming occurs. Young animals spend more time in REM than older animals possibly due to the large amount of new information that they encounter each day and the need to process it all.” Cats seem to fall asleep anywhere. But why do cats fall asleep in sinks?

What do cats dream about? 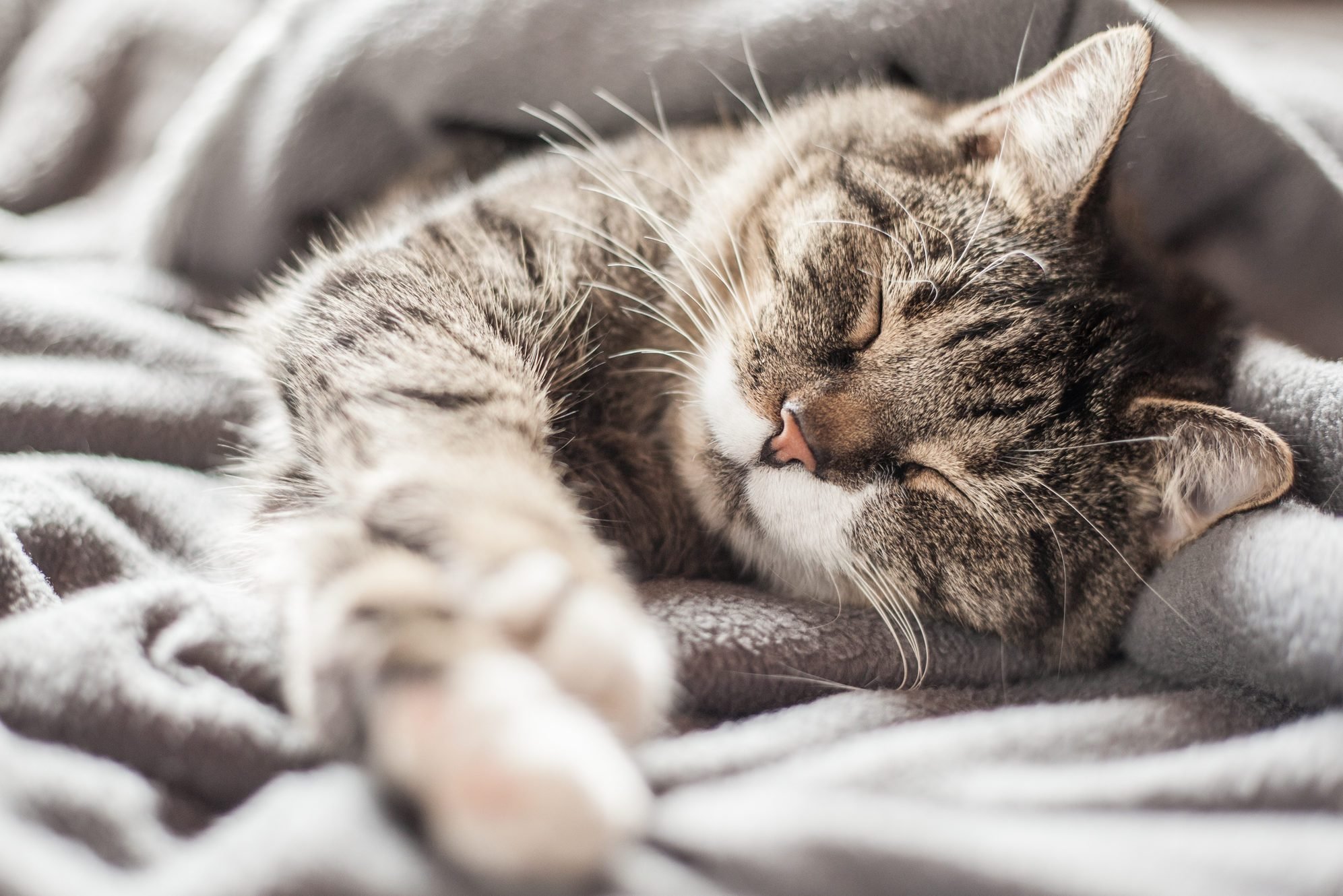 People dream about their lives and cats seem to dream about their lives, too. “Well, since we’re unable to ask them what they dream about, we have to deduce that, similar to us, they dream about their day,” says Dr. Nelson. “If they went outside and saw a bird and another kitty friend, those images are likely what is playing through their mind during sleep. Perhaps they’re even dreaming about you, their delicious dinner, and the pens and chapstick that they pushed off of your table just so they could watch them fall!” Every cat owner knows their cat likes to wander about at night, but do cats actually see in the dark?

Are cats dreaming when they move or make noise in their sleep?

People make noises and move when they’re dreaming, so it would make sense for cats to make noises and move, too. “Scientists believe that they are dreaming during these times,” says Dr. Nelson. “These fine motor muscles are reacting to the images being replayed in their minds.” Here are 27 cats making themselves comfortable just about anywhere.

Do cats have nightmares?

Have you ever been startled awake from a nightmare that seems just a bit too real? Cats probably have the same experience. “Just like us, animals’ dreams may not always be happy or based on their reality. Nightmares are suspected to be the way that our minds determine the best course of action in case that dream experience occurs during waking hours,” says Dr. Nelson. “Our cats aren’t likely to dream of monsters or missing a final exam like we do, but who knows…maybe they dream of oversized mice or seeing the bottom of their food bowl!” Next time you’re getting ready for sleep, it’s probably time to ask yourself: Is it OK to let your cat sleep in your bed?

Why Do Dogs Chase Cats?

How to Keep Your Pets Safe This Winter