What Do Dogs Think About?

Dogs really do have a mind of their own—here are 13 things they think about during the day.

“Dogs are smarter than most people give them credit for and there’s no denying that they have a mind of their own and can experience a range of emotions including guilt, joy, frustration, and grief,” says Linda Simon, DVM, a licensed veterinarian and veterinary consultant for ThePets. For instance, we’ve all witnessed the “sad eyes” of a dog being reprimanded or that brief look of disgust on their face when the cat gets the treat instead of them. There have even been accounts of bereaved dogs who have waited loyally for their deceased owners to return. Clearly, they’re thinking about something.

But what, exactly, are our dogs thinking about as they go about their lives?

It’s important to avoid “anthropomorphizing” your pet—attributing human thoughts and characteristics to non-humans because that assumes they see, think, and feel the same way you do, Simon says. To bond with your dog, it’s important to try to understand what they’re thinking rather than putting your thoughts on them, she says. This is what your dog actually wants from you.

Here are some common thoughts that dogs have:

Dogs, unlike other pets, are often quite open in letting us know how they feel about us. “There’s a reason we refer to them as man’s best friend,” Simon says. “When your dog jumps up on you as you walk through the door, wags their tail when they spot you from afar and covers you in slobbery kisses, you can be confident they’re thinking ‘Hey, this person is pretty swell!'” she says. To make sure you get the message, check out these 28 ways your pet is trying to say “I love you.”

“You hurt my feelings!”

“Some dogs are particularly sensitive to criticism and may exhibit signs of anxiety when being reprimanded, such as hiding away or even trembling,” Simon says. “Other dogs will act quite unfazed by a good scolding or even cocky, and as soon as you’re done, it’s clear they’re not thinking about it at all anymore.” However, it is important to recognize if you have a sensitive dog and use a positive training program to help allay their anxiety, she says.

“Fido was here too!”

Dogs love to check their “pee-mail,” by sniffing at various locations around your neighborhood or on walks. This isn’t just a territorial instinct, it’s also a way of looking to see what other dogs have been there, says Heather Venkat, DVM, MPH, DACVPM, a veterinarian for the Arizona State Public Health Department. “As they sniff, they take in a lot of information about a lot of other dogs, not to mention other animals and humans,” she says. Hint: Not letting your dog sniff things on a walk is one of the 16 things dogs hate when you do.

“Does that bunny want to play tag?” 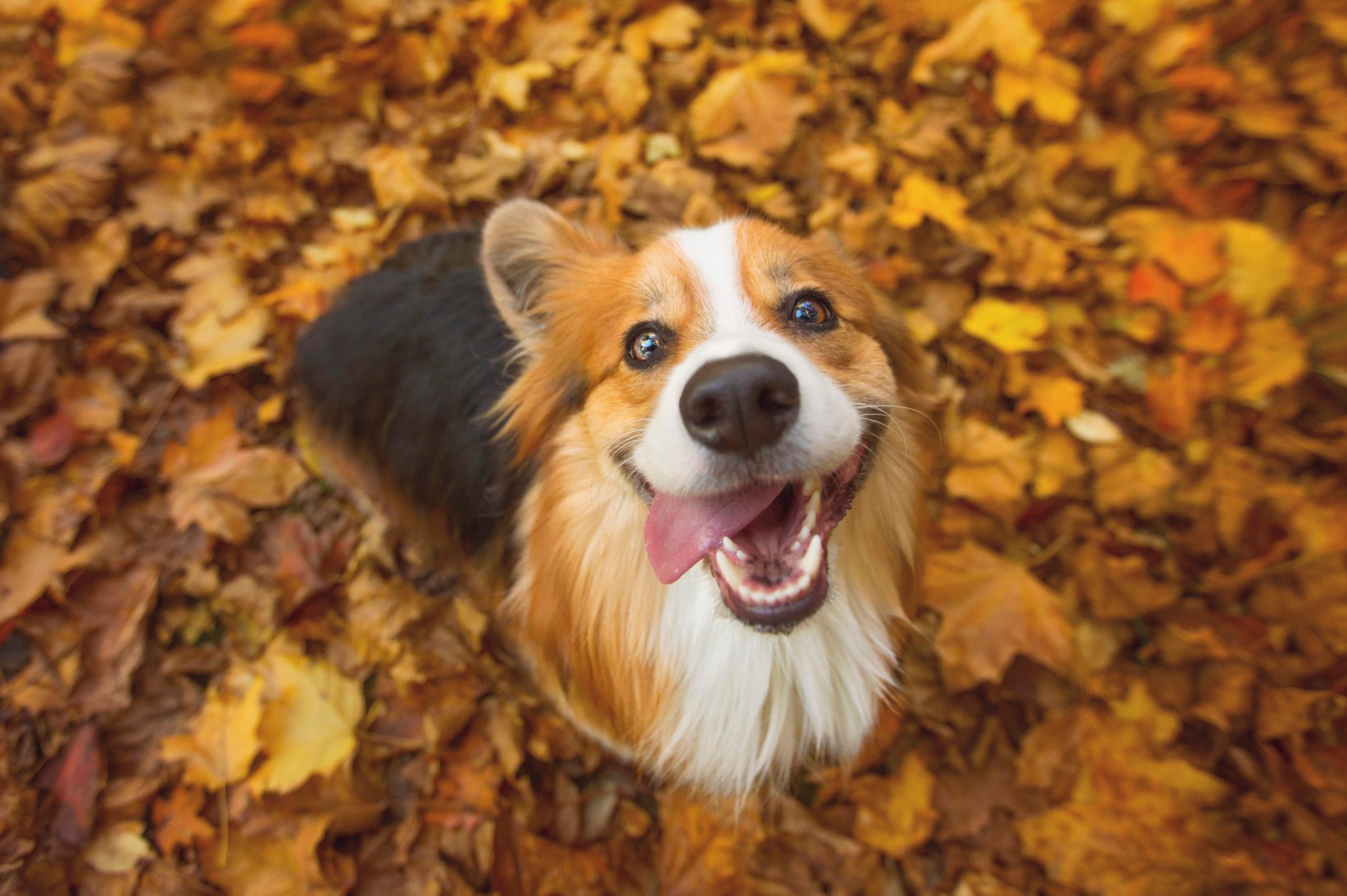 Naturally inquisitive, your dog is always on the lookout for wild animals like squirrels, birds, or rabbits, Venkat says. “Your dog is wondering where those animals are and if they can play with them or interact with them,” she says. Unfortunately, dogs may be too rough in their play or their predatory instincts may kick in and they see critters as food so it’s best to keep them on a leash and let them look at the wildlife from afar.

“Never fear, I will guard the little humans!”

Protection of the pack comes naturally to dogs and many owners have noticed that their dog spends extra time watching over their children. “Dogs who spend a lot of time around children and play with them from a young age can develop beautiful relationships,” Simon says. “Things can work out especially well if the dog is young when the baby arrives, meaning they can mature together and become each other’s playmate.”

Some dogs, particularly those who do not live with other dogs or were not well socialized when they were puppies, think far more about their two-legged friends than they do about their canine buddies, Simon says, “These dogs likely don’t give a whole lot of thought to dogs in general, their humans are their ‘pack,” she says. “You can tell if your dog thinks this way if they ignore other dogs when out on a walk.” Thinking of traveling with your dog? Here’s everything you need to know about road tripping with dogs.

“What is this new thing and why does it keep making that noise?”

Having a new baby is a seismic shift for the whole family, dogs included. “When a new baby comes home you’ll see them trying to figure out how they are supposed to play with it, the proper way to behave around it, and likely wondering why it keeps crying,” Venkat says.

“The Fed-Ex man will kill us all—but not on my watch!”

“Dogs are always thinking about how to protect their family from any outside threats,” Venkat says. Unfortunately, their assessment of a threat may be different than yours, causing them to go on high alert for neighbors, mail carriers, and even that pesky squirrel. Regardless, they are always ready to leap to your defense (or just bark like they would). 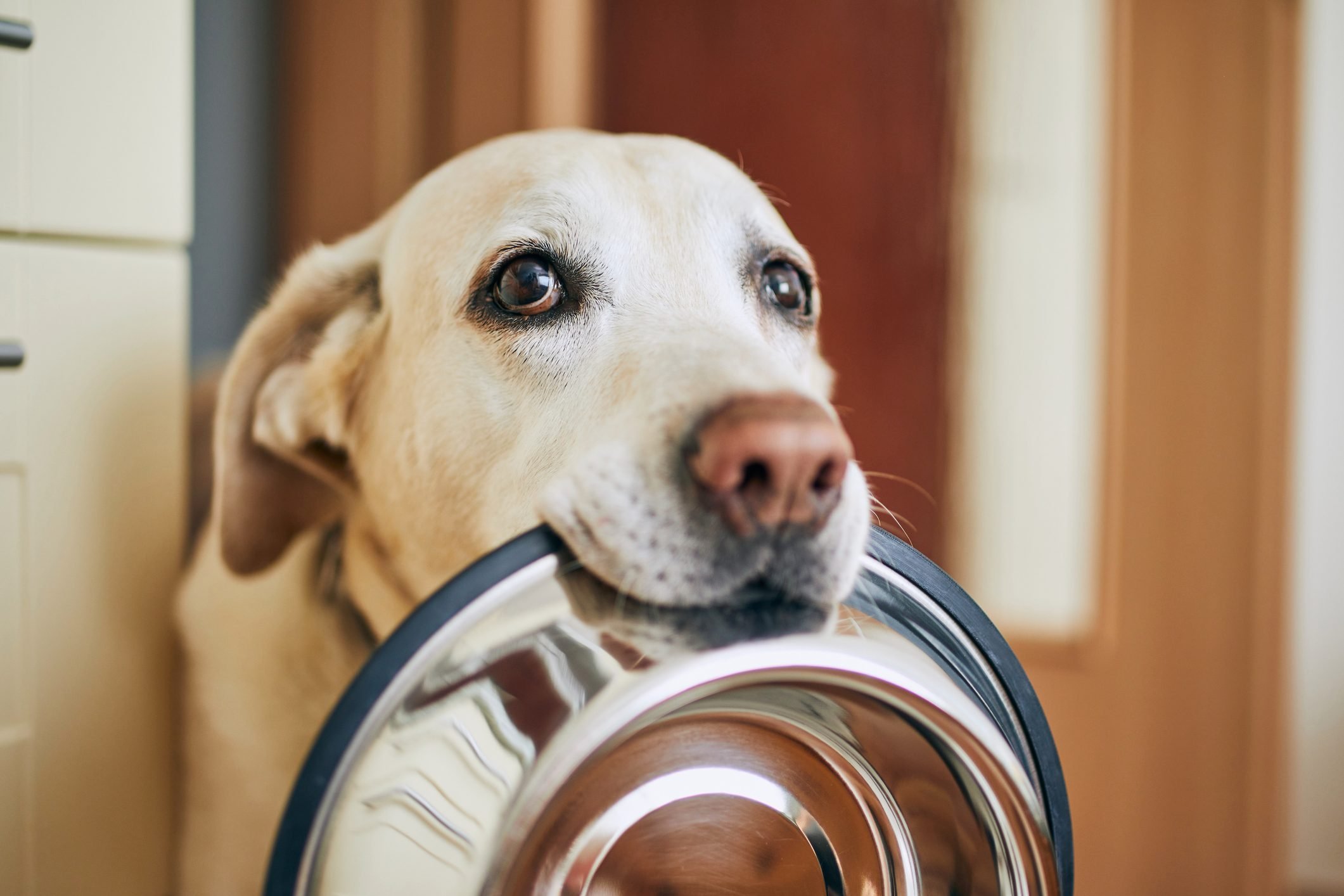 “We know that dogs like a routine, it makes them feel secure and cared for. So, if you have a routine, it’s probably quite easy to know what your dog is thinking about,” says Julie James, a dog behavior expert and certified dog trick instructor for The Animal Talent. They also have ways of letting their humans know what part of their schedule is on their mind! Do you know these 14 rude habits pet owners need to stop ASAP?

For most dogs, it’s a non-event when you leave for brief periods of time. However, this is not the case for those with a condition known as separation anxiety, Simon says. “Some dogs find it hard to cope when they are left alone in the house and you can tell they are thinking anxious thoughts by exhibiting behaviors that may include barking, panting, and even furniture chewing,” she says. “We can assume that these dogs are unhappy, bored, or lonely. They may even be fearful that we are not coming back.”

“I love eating things that smell like your feet!”

Smell is a dog’s primary sense and they love nothing more than to smell… you, James says. This means they will be primarily attracted to items that are particularly odiferous, like your socks, shoes, or underwear, and may chew them to bits. “Will he feel guilty about keeping himself busy chewing your things? Nope,” she says. It’s a sign of his love and affection. Instead, give your dog plenty of chew toys—just make sure you avoid the toys on this list of pet products vets never buy.

“This is the way to the dog park!”

Your pup likely has a good sense of direction and combined with a regular routine, will learn how to get to their favorite spots, James says. “I know my dog understands we are going to the dog park because he’s always so enthusiastic on the way there,” she says. “I walk him to different parks for variety and sometimes I let him decide which route to take and which park to go to. You can try it with your dog, let them choose the route and see where they lead you to. Maybe they’ll surprise you by leading you to the pub instead!”

“You have treats in your pocket!”

“I think that for most dogs, food is the number one thing they think about,” James says. How can you tell when your furry friend is getting munchy? Watch their cues. “Every day my dog sits and stares at me for at least an hour before it’s time for his supper, so I can’t forget to feed him,” she says. “I know that he loves training because he gets to eat lots of treats and I know he loves bedtime solely because he gets a bedtime treat!” Taking time to train your dog is one of the 15 things great pet owners do every day.

Do Dogs Have a Sense of Time?

Here’s the Only Time You Should Use Your Hazard Lights