Police are using rubber bullets against protestors, but just because it's a rubber bullet doesn't mean it's safe.

The use of a rubber bullet is one of the more controversial crowd-control measures, says Robert Glatter, MD, an emergency physician in New York City. Physicians for Human Rights (PHR) have called for extreme restrictions on the use of rubber bullets, while Israel has disallowed them except in extreme circumstances and only with special approval from the chief of police, according to a 2016 report by PHR and the International Network of Civil Liberties Organizations (INCLO).

Still, rubber bullets are being used widely by law enforcement to subdue often peaceful protesters in the wake of George Floyd’s death in Minneapolis. And there have been several reports of harm, including a grandmother who ended up in intensive care after a rubber bullet struck her between the eyes. In another case, a freelance photographer reported being permanently blinded in one eye as a result of a rubber bullet. In Washington, D.C., the National Guard allegedly used the bullets to clear protesters in Lafayette Square in anticipation of President Donald Trump walking through the area. Here’s how to spot a fake donation scam.

According to the PHR/INCLO report, rubber bullets are one of a category of weapons called kinetic impact projectiles (KIPs), says Ian Wittman, MD, chief of emergency medicine at New York University Langone Hospital–Brooklyn. “They’re not always rubber,” he adds. More than 85 manufacturers around the world fashion them out of plastic, PVC, and combinations of rubber, plastic, PVC, metals such as lead and steel, wood, hard foam, and wax. A spokesperson for the Minneapolis Police told Kaiser Health News, that bullets fired by members of his department were “foam marking rounds,” not rubber. Some newer versions contain tear gas or pepper spray and explode on impact, according to a 2017 study published in BMJ Open. So-called rubber bullets can be fired as a single shot or as pellets, called “shot.”

Rubber bullets and other KIPs are touted as non-lethal alternatives to traditional bullets and, while they may be less dangerous than traditional firearms, says Dr. Wittman, “there is absolutely a significant risk in being shot by one of these especially if the shot is at close range and in the neck and head area.”

The type of damage depends on the specific ammunition used, how it’s delivered (and from what distance), how fast it traveled (some travel as fast as live ammunition, according to the 2017 BMJ Open study), and other factors. “Their projectile force is equivalent to that of a bullet, so if fired at close range they hit people as hard as a metal bullet. At longer ranges, their trajectories are unpredictable and indiscriminate, hitting bystanders, peaceful demonstrators in the face, head, or neck,” adds Rohini Haar, MD, a medical expert at Physicians for Human Rights and research fellow at the Human Rights Center at the University of California, Berkeley’s School of Law.

On the less severe end of the spectrum, it can cause bruising and pain, says Dr. Wittman. But it can also cause broken bones and more. 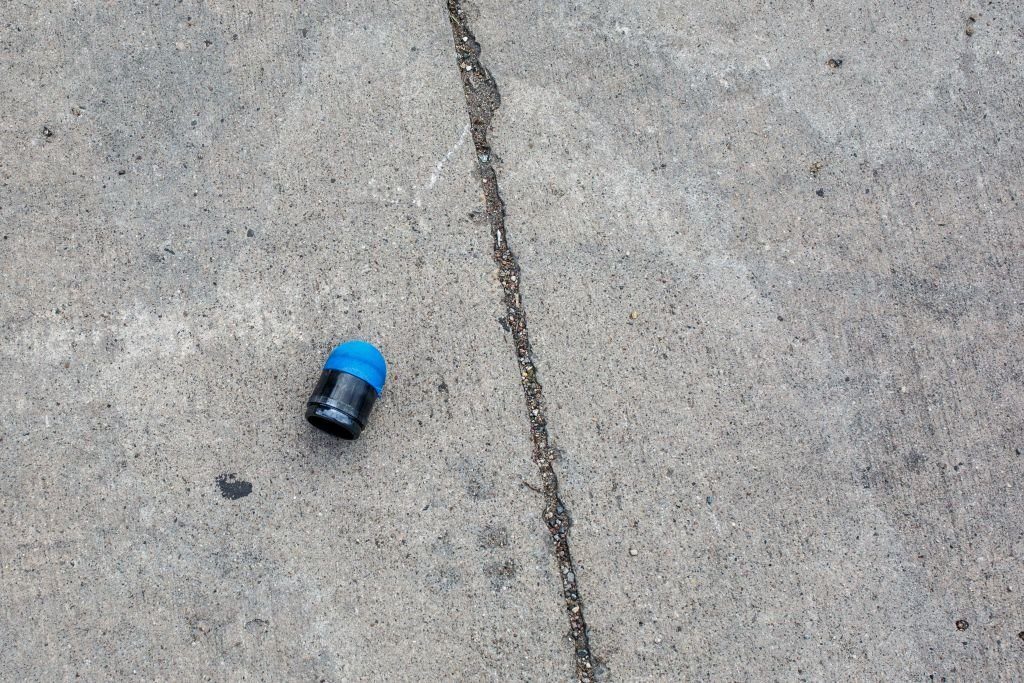 Long-term health issues after being shot by a rubber bullet

In the 2017 BMJ Open study, researchers found 53 of 1,984 people studied (3 percent) died from KIPs, and 300 (15 percent) recovered but with permanent disabilities. Both of these outcomes—death and permanent injury—most often came from head-and-neck injuries inflicted by weapons that contained metal.

Rubber bullets can also pierce your eye and cause blindness, adds Leigh Vinocur, MD, a spokesperson for the American College of Emergency Physicians.

There have also been reports of collapsed lungs, fractures, chest injuries, spleen, and bowel injuries, says Dr. Glatter. A shot in the head can cause a skull fracture and a bleed in the brain, adds Dr. Wittman. Not to mention the anxiety that often ensues from any form of violence. “The abuse of crowd-control weapons by law enforcement is compounding the trauma of George Floyd’s killing,” comments Dr. Haar.

How to get help if you’re shot

“If you are shot by a projectile, you should seek medical care immediately, whether you’re shot by a traditional gun or shot by a so-called less-than lethal-weapon,” says Dr. Wittman.

Hospital evaluation might include an X-ray; if you’re hit in the leg, for example, and you’re having increasing pain and are unable to walk, says Corey Slovis, MD, chairman of emergency medicine at Vanderbilt University Medical Center in Nashville, as well as medical director for the Nashville Fire Department and airport. Doctors should also assess you if you’ve been hit in the abdomen (you could have a bowel injury), face, and, especially, your eyes to prevent blindness.

How to protect yourself in protests

Wearing a face shield or goggles and a helmet may “protect the most vulnerable areas of the body,” says Dr. Wittman. Some people wear body armor such as a bullet-proof vest to reduce the impact, but it’s not always legal to do so. “Long pants, long sleeves are padding to absorb impact as well,” says Dr. Glatter.

A word about COVID-19: Crowds also significantly increase the risk of spreading COVID-19. “Protestors should wear masks, gloves and eye protection, keep some distance between protestors, stay outside in the open, avoid touching one’s face, try not to touch other people or objects held by others (such as signs, food, and beverages),” says Dr. Haar. “Wash or sanitize your hands as much as possible, and shower when you get home.”

Stay home if you have symptoms or if you will be in close contact with someone who is at higher risk for getting the novel coronavirus, she adds. Now, learn why you should change your phone setting before you protest.

Photos of Unity We All Need to See

Amanda Gardner
Amanda Gardner is a freelance health reporter whose stories have appeared in cnn.com, health.com, cnn.com, WebMD, HealthDay, Self Magazine, the New York Daily News, Teachers & Writers Magazine, the Foreign Service Journal, AmeriQuests (Vanderbilt University) and others. In 2009, she served as writer-in-residence at the University of Wisconsin School of Medicine and Public Health. She is also a community artist and recipient or partner in five National Endowment for the Arts grants.

How to Clean Your Washing Machine, According to Laundry Experts
This Is the Easiest Way to Peel Hard-Boiled Eggs