What Is CC Cream And Why Is Everyone Obsessed With It?

CC cream may be your face's new best friend—if you know exactly what it is and how to wield it's awesome powers. CC creams have been a cult-favorite beauty item in Asia and Europe for years, and they’re becoming a mainstay in the United States, thanks largely to current makeup trends. “CC cream became popular in 2010 following the introduction of BB cream, when the ‘no makeup, makeup look’ hit its stride,” says Alexis Ferro, lead artist at Blushington Makeup & Beauty Lounge. “Now it’s been around for a while and I can’t envision it going anywhere because of its great corrective abilities.”

Unlike multitasking BB creams (“BB” stands for “beauty balm”), which work as an SPF, foundation, concealer, moisturizer, and primer with some skincare benefits, the “CC” in CC cream stands for “color correction” and does just that. While BB creams act like a light foundation, CC creams provide less overall coverage but are great for camouflaging redness and sunspots. “CC creams have more targeted uses and are best for those with hyperpigmentation or problem skin,” Ferro says.

While CC cream isn’t an all-in-one product like BB cream, it can do double duty as a light foundation if you prefer a very light coverage, according to Nordstrom National Beauty Director MaryNell Maddox. People love that it doesn’t feel heavy and still manages to hide redness or other skin discoloration, she says.

Applying CC cream evenly can be tricky, so Ferro recommends using a Beauty Blender makeup sponge. “CC cream is a buildable formula, which is especially important in areas that need more correcting,” she says. “Using a Beauty Blender allows you to build the product while still having an even finish.” If you don’t have a makeup sponge, use your fingers. “A small amount of product should be dotted on the cheeks, chin, and forehead,” Maddox says. “Blend over the face using a patting motion to maximize coverage.”

Use these makeup tricks to fake a flawless complexion. 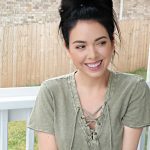 9 Super-Common Eyebrow Mistakes—and How to Fix Them