This Is What It Really Means to Be a Neighbor

Passed from one home to the next, a box of  ornaments reminds a family of the bonds around them. 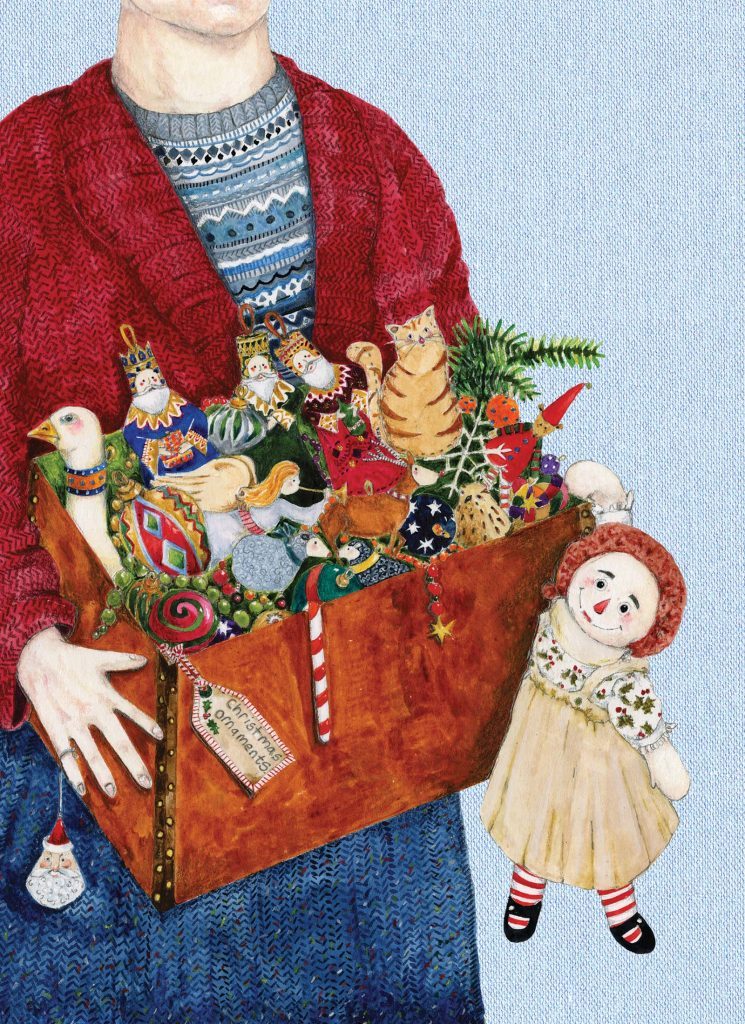 My kids sit in Gee’s living room and reverently lift antique Christmas ornaments out of a well-loved cardboard box. They gasp when they discover a tiny stuffed cat. They giggle at Raggedy Ann, who is a foreign character to them. Gee stands beside them, quietly explaining each treasure. She tells me that she and Tom built their ornament collection piece by piece during each year’s after-Christmas sale. She smiles as we leave with the box. Her precious heirlooms, gathered over a lifetime, have found a new home.

We first met Tom and Gee in the early days of our marriage. Someone had been returning our garbage cans to the garage each garbage day, and Jim and I had wondered who. Then one day we spotted him: an elderly man who lived across the street.

I baked cookies and left them on a stool outside the garage with a thank-you note. When we got home from work that day, a typed letter had replaced the gift. The letter was from Tom and explained how he had come to walk the neighborhood on garbage day, returning cans for people he barely knew. Back when he’d been fighting a war I wasn’t alive to see, his young wife, Gee, had found herself living alone. Neighbors had taken the time to handle her garbage cans so she didn’t have to, and he never forgot. Now he paid it forward by doing the same for all of us. (It was also his way of sneaking a smoke while Gee wasn’t looking.)

A few years after we’d moved in, Tom died. We photocopied that letter and attached it to one of our own for Gee. We told her how special Tom had been to us, how we grieved for her, how thankful we were to have known him—the inadequate words that come with condolence. She wrote back and told us she still talked to Tom every day. When Gee invited us over to look through Christmas ornaments, I realized how hard it must be to part with that box, a piece of Tom.

These days, we’re piling up boxes of our own. We’re planning a move. The house that seemed so huge six years ago is filled to capacity with furniture and books and toys and, of course, people. We know it’s time to go, and yet we can’t seem to stick the For Sale sign up on the lawn. Gaining a third bedroom and maybe an office sometimes seems like a lousy trade for all we stand to lose.

It’s not just Gee. It’s the man who lets our kids pick peaches off the tree in his front yard. It’s the ladies who call Jim when their pool filter breaks and leave overflowing baskets for our kids on Easter. It’s the corrections officer directly across from us, who smiles and waves and makes me feel a little safer when Jim is away.

The moving boxes are still neatly packed in our basement, but Jim  and I agree to wait until January. This Christmas, we’ll decorate our tree with Gee’s ornaments, out of the box that is labeled in Tom’s handwriting. Maybe I’ll talk to him just as Gee still does. Thank you, I’ll say. For teaching us what it means to be a neighbor. Next, read about these other incredible things people have done to help their neighbors.