A black detective explains why tough conversations about policing are the first step toward real change.

These are turbulent times. In recent weeks, white police officers again have been captured on video killing African American men. The horrific footage of a Minneapolis police officer using his knee to press the life out of George Floyd, who was unarmed, sparked sustained, angry protests around the country. For Yuseff Hamm, a black Manhattan-based detective with the New York Police Department, Floyd’s killing was doubly personal.

The unjustified killings of black people by police have to stop

We, as African Americans, have been trying to shine a light on certain racial aspects and components of policing for a long time. Historically, policing hasn’t been used in the black community for the benefit of the African American—think back to slavery, when police were used for night patrols to catch runaway slaves. We’ve always had a back-and-forth struggle with policing. This is not a new situation—what happened here was a historical volcanic explosion. At some point in time, enough’s going to be enough.

As a law enforcement officer, I was appalled by what happened to George Floyd. Once the handcuffs were placed on him, the fight should have been over. But apparently, it wasn’t. After seeing that video, I knew that there was going to be civil unrest afterward.

The African American community and the Grand Council of Guardians—which advocates for equal treatment of people in the community, black police officers, and black civilians employed by the police department—have been fighting this fight for so long. Sometimes, you become a little numb to certain situations because it’s like, “Wow, again, again, again, again.” But there is just something about George Floyd’s death that cut to the core. It doesn’t take away from all the other tragedies across the country. But with this one, there was just something about that whole eight minutes, and then to hear him call for his mother in such a heart-wrenching way—any black man can identify with that call. That call signified pain, a trauma that no one could ever have believed because we’re all taught to be strong. My brother used to say, “Oh, just suck it up. Take it like a man.” And so, to reach out to your mother at a time like this shows your vulnerability.

I have heard more police officers who are not black say, “This guy (Derek Chauvin, the former Minneapolis police officer charged in George Floyd’s death) should receive whatever he’s going to receive.” They’re voicing their anger with what happened through social media posts, in verbal conversations with me, and I’m sure with other African Americans. They have said that there need to be changes in training, in job assignments, and that certain police officers shouldn’t do anti-crime assignments early in their careers—things like that. And a lot of senior officers are taking those positions. There is always one incident that goes too far, and this was that incident that just went too far.

One thing that I often would tell people is, “You may not agree with the arrest. You may reject the police officer’s handling. But the ultimate goal is to come away safe from that situation.” And that didn’t happen in this case. So, I have to rethink my position on telling people to comply and adjudicate their problems in court, because sometimes we do comply and we never make it to court. Now what do I say? I’m still processing it. How do I go back in the African American community and say complying works because they’ll say to me, “Well, it didn’t work for George Floyd.” And how do I respond to that? I have no response but to say, “You’re correct.” I can’t go back with statistics because that would minimize the importance of what happened.

We have had protesters come by the station, though, and I’ve had the opportunity to interact with those protesters, who always stress that they want to have dialogue. And so I’ve said to them on a number of occasions, “Honest dialogue hurts. Honest conversation hurts.” We want to have conversation, but it hurts, whatever the side of the fence you’re on—the law-enforcement side or the civilian side. You have to be prepared for the truth, have a response for it, and have a solution. We can’t think that one side is a 90 percent contributor to a problem. Each side contributes to a problem. That’s the case in any situation. We’ve got to honestly look at the contributions on both sides if we’re going to come up with a real solution.

Check out these 15 essential books for understanding race relations in America.

Some African Americans think I’m unsympathetic to the cause

The issue that bothers me is that because I wear a uniform, I’m sometimes perceived to be unsympathetic to the fight for racial justice. One day, a young lady, who was a protester, came up to me and said, “Officer, can I ask you a question? What is it like to be a black police officer during this time?” I smiled at her and said, “You know, this is the type of conversation we need. It’s a difficult time to be an African American police officer because we’re perceived to be unsympathetic, non-supportive of the cause. But that’s the furthest thing from the truth.”

No good police officer would believe that the killing of Floyd was an acceptable act. And I’m not just talking about black police officers; I’m talking about a cross-section of police officers. We all know that there’s going to be some that secretly support this. But those of us who are honest and who want things to be different, we welcome this opportunity to effect real change. I was the past president of the Grand Council of Guardians, and this is what we wanted. We wanted to change certain aspects of policing that would be conducive to the growth of African American men and women.

African Americans should know that I’m always advocating for them, whether it’s to get jobs in the police department or for their civil rights. I’m an advocate.

This is what it really means to be an ally in the movement toward equality.

As the past president of the Guardians and as someone who is pro-black, I am often viewed by others as being militant. Those who don’t fully understand it always perceive the organization as a militant group—militant Africans in the police department. That’s not the case at all. I’m not advocating an overthrow of the police department or advocating an overthrow of the government. I’m just advocating for equal justice, for fair and equitable decisions to be based not upon my race but on my ability to get the job done. So, that is one of the problems that are on this side of the fence. When African Americans speak up about racial inequalities, we’re hashtagged, labeled un-American, unappreciative of things. Why are we constantly labeled un-American because we speak out against an injustice? That’s wrong.

If you know me as the type of police officer that I have been for the last 19 years, then you know I’m fair and just. But people consider your affiliations to organizations, especially African American organizations, and some of them automatically think something different. But when history finally tells the true story, they’ll go, “You know, that was a good dude.”

As an African American man and as a detective, I have hope now that African Americans are coming to the table. If you’re not at the table, the conversation isn’t on the menu. Now more people are seeing that African American people really are going through this. Before it was like, “They’re just talking. That doesn’t happen. That’s not happening.” But now it’s being videotaped. It’s being audio-recorded. It’s being shown repeatedly, and it’s being shown in more than one section of the country. So, now it’s like, “Wow, maybe all of this time they weren’t just spitting in the wind. There is something there.”

And the amazing thing about it is the beautiful mosaic of non-black people who are saying this. You know, we often want our children to change the world, and our children, the millennial protesters, are changing the world because they’re the ones who are saying, “Wait a minute—there’s something there.” Generationally, we couldn’t get it done. We brought the attention, and now they’re taking things further. It gives me hope.

My only fear is not doing enough to change things. I had another protester ask me if I fear being a black man, and I said, “No. I don’t fear being a black man. I just fear being the guy who doesn’t do my part.” That’s what I fear. As long as I do my part, as long as I do my part, I think I’ll be all right. My biggest fear is to look back and say, “Damn it, I could have done something a little differently.” My part is to project the positive image of African American policing and African American men, because we can’t see what we’re not.

Looking for a way to help? Here’s how to support the Black Lives Matter movement and become anti-racist.

I’m passionate about being an African American police detective 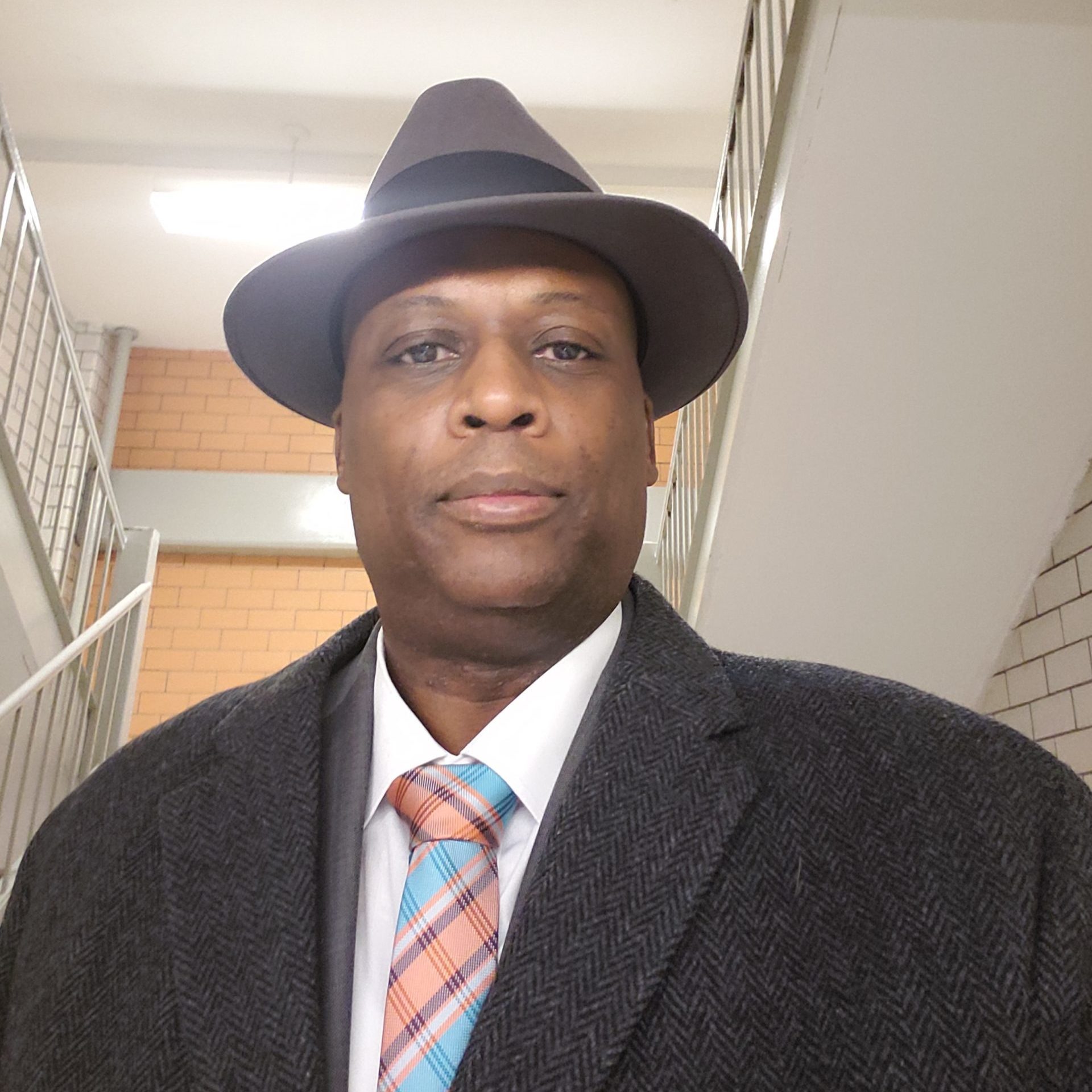 Courtesy Detective Yuseff HammThe thing that I’m most passionate about is the projection of my image as an African American police detective in times like this. People are uncertain, unsure of what’s going to go on, and they look for that one beacon of light and hope to say, “You know what—this is the person I can talk to and feel comfortable and safe around.” I want to project that level of comfortability of both sides of the spectrum. Is it always going to happen? No, because some people are just not going to be open to receive what you have to give and some people are going to judge what you’re giving. But I will still do my best to do my part.