A pilot’s reflections on life in the sky.

I’ve been asleep in a small, windowless room so dark, it’s as if I’m below the waterline of a ship. I’m alone, in a blue sleeping bag and blue pajamas that I unwrapped on Christmas morning several years ago and many thousands of miles from here. My head is near the wall. Through the wall comes the sound of steady rushing, the sense of numberless particles slipping past, as water rounds a stone in a stream but faster and more smoothly. There is a gentle swell to the room, a rhythm of rolling. The wall is curved; it rises and bends up over the narrow bed. I am in the hull of a 747.

When someone I’ve just met learns that I’m a pilot, he or she often asks where I fly and which of these cities I love best. But three questions come up most often. Is flying something I have always wanted to do? Have I ever seen anything “up there” that I cannot explain? And do I remember my first flight? I like these questions. They suggest that even now, when many of us so regularly leave one place on the earth and cross the high blue to another, we are not nearly as accustomed to flying as we think. (These are the things the airlines won’t tell you.) 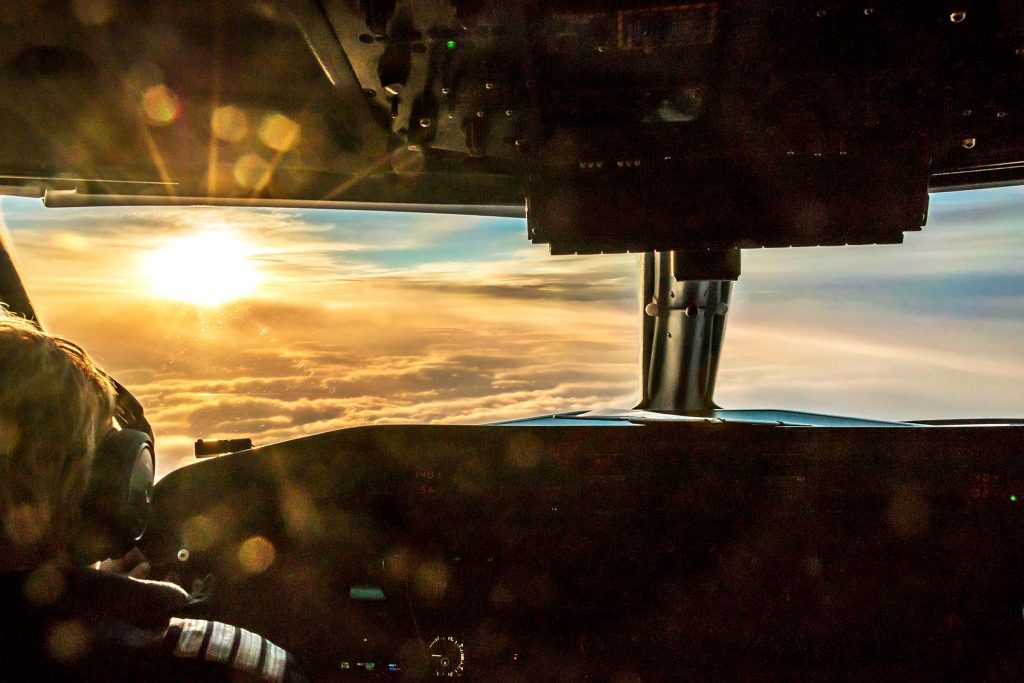 A chime sounds in the darkness of the 747’s bunk. My break is over. I feel for the switch that turns on a pale-yellow beam. I change into my uniform, which has been hanging on a peg for something like 2,000 miles. I open the door that leads to the cockpit.

As my eyes adjust to the brightness, I look forward through the cockpit windows. At this moment, it’s the light itself, rather than what it falls upon, that is the essential feature of the earth. What the light falls upon is the Sea of Japan and the snowcapped peaks of the island nation we are approaching from far across this water. The blueness of the sea is as perfect as the sky it reflects. It is as if we were slowly descending over the surface of a blue star, as if all other blues were to be mined or diluted from this one.

As I fasten my seat belt, I remember how we started the engines yesterday in London. How a hush fell in the cockpit as the airflow for the air-conditioning was diverted; how the enormous techno-petals of the fans spun faster and faster, until fuel and fire were added and each engine woke with a low rumble that grew to a smooth and unmistakable roar.

I remember the aircraft that lifted off ahead of us into the London rain. As that aircraft taxied, its engines launched rippling gales that raced visibly over the wet runway, as if from some greatly sped-up video recording of the windswept surface of a pond.

I remember our own takeoff roll, an experience that repetition hasn’t dulled: the unfurling carpet of guiding lights that say here, the voice of the controller that says now. With speed comes the transition, the gathering sense that the wheels matter less and the mechanisms that work on the air—the control surfaces on the wings and the tail—more. We feel the airplane’s dawning life in the air clearly through the controls, and with each passing second, the jet’s presence on the ground becomes more incidental to how we direct its motion. (These are the 18 things you should never do on an airplane.)

On every takeoff, there is a speed known as V1. Before this speed, we have enough room left ahead of us on the runway to stop the takeoff. After this speed, we may not. Thus committed to flight, we continued along the ground, gathering still more speed. As the lights of the runway started to alternate red and white to indicate its approaching end, I lifted the nose.

As if we had only pulled out of a driveway, I turned right, toward ­Tokyo. Below, London grew bigger before it became smaller. We followed London’s river as far as the North Sea. Then the sea turned, and Denmark, Sweden, and Finland passed beneath us, and night fell. Now, after ten hours of flying, I’m in the new day’s blue northwest of Japan, waiting for Tokyo to rise as simply as the morning.

I settle myself into my sheepskin-covered seat and my particular position above the planet. I blink in the sun, check the distance of my hands and feet from the controls, put on a headset, and adjust the microphone. I say good morning to my colleagues, and they update me on the hours I was absent. I check the computers, the fuel gauges. Small, steady green digits show our expected landing time in ­Tokyo, about an hour from now. Another display shows the remaining nautical miles of flight, a number that drops about one mile every seven seconds.

Iam occasionally asked if I don’t find it boring to be in the cockpit for so many hours. The truth is, I have never been bored. I’ve sometimes been tired, and often I’ve wished I were heading home rather than moving away. But I’ve never had the sense that there was any more enjoyable way to spend my working life, that below me existed some other kind of time for which I would trade my hours in the sky.

When I was a child, I used to assemble model airplanes and hang them in my bedroom, under a ceiling scattered with glow-in-the-dark stars, until the day skies were hardly less busy than Heathrow’s and at night the outlines of the dark jets crossed against the indoor constellations. I looked forward to my family’s occasional airplane trips with an enthusiasm that rarely had much to do with wherever we were going. I spent most of my time at Disney World awaiting the moment we would board again the magical vessel that had taken us there.

Most pilots love their work and have wanted to do it for as long as they can remember. Many began training as soon as they could, often in the military. But I’ve been surprised at how many of my fellow trainees had traveled quite far down another path—they were medical students, pharmacists, engineers, who, like me, a former historian and management consultant, had decided to return to their first love.

Some pilots enjoy the hand-to-eye mechanics that are related to movement in three dimensions. Others have a natural affinity for machines, and airplanes are engineered nobility, lying well beyond most cars, boats, and motorcycles on the continuum of our shiny creations.

Many pilots, I think, are especially drawn to the freedom of flight. A jet is detached, physically remote, and separate for a certain number of miles and hours. Such solitude is all but absent from the world now, and so—­paradoxically, for in the cockpit we could hardly be better encased in ­technology—flight feels increasingly old-fashioned. When I was thirteen and got my first portable cassette player and headphones and began to choose music for myself, I asked my brother if pilots were allowed to listen to music while they flew. He answered that he wasn’t sure, but he thought not. He was right. But as passengers, we are all given these increasingly rare quiet hours in which there is nowhere we have to go and nothing we have to do, hours in which we are alone with our thoughts and music and the moving picture of our journeys.

Then, too, there is the perennial yearning for height that many of us share. High places have gravity. They pull us up. We climb mountains. We build skyscrapers and visit their observation decks. We ask for an upper floor in a hotel. We ponder photographs taken from high above our homes, our towns, our planet.

P[d/ropcap]erhaps evolution alone explains the attraction of altitude. Here is the big picture, the lay of our land, what approaches our cave or castle. But I think our love of height cannot be entirely explained by its many practical uses. In so many realms, we seek evidence of interconnection, of parts that form a whole. Flight is the carto­graphic, planetary equivalent of hearing a song covered by a singer you love or meeting for the first time a relative whose features or mannerisms are already familiar. Airplanes raise us above the patterns of streets, forests, suburbs, schools, and rivers. The ordinary things we thought we knew become new or more beautiful, and the visible relationships between them on the land, particularly at night, hint at the circuitry of more or less everything.

Many travelers leave home not just to see new places but also to see the whole of the place they have left from the various kinds of distance—­cultural, physical, linguistic—that travel opens for them. Occasionally I fly to a city in which one of the attendants on my flight lives or was born, and he or she is invariably eager to join us in the cockpit for takeoff or landing, to watch how the loved place leaves the cockpit windows or comes to fill them again.

I love flying, for all these reasons. But to me, the joy of airliners is the particular quality of their motion over the world. When I run through the woods, over the ground, the branches are close, loud, fast. I am what’s moving. I love to fly because I love to watch the world go by. The journey, of course, is not quite the destination. Not even for pilots.

Still, we are lucky to live in an age in which many of us, on our busy way to wherever we are going, are given these hours in the high country, when lightness is lent to us, where the volume of our home is opened and a handful of our oldest words—journey, road, wing, water; earth and air, sky and night and city—are made new. From airplanes, we occasionally look up and are briefly held by the stars or the firmament of blue. But mostly we look down, caught by the sudden gravity of what we’ve left, and by thoughts of reunion, drifting like clouds over the half-bright world.

Buy a copy of Skyfaring: A Journey with a Pilot by Mark Vanhoenacker here. 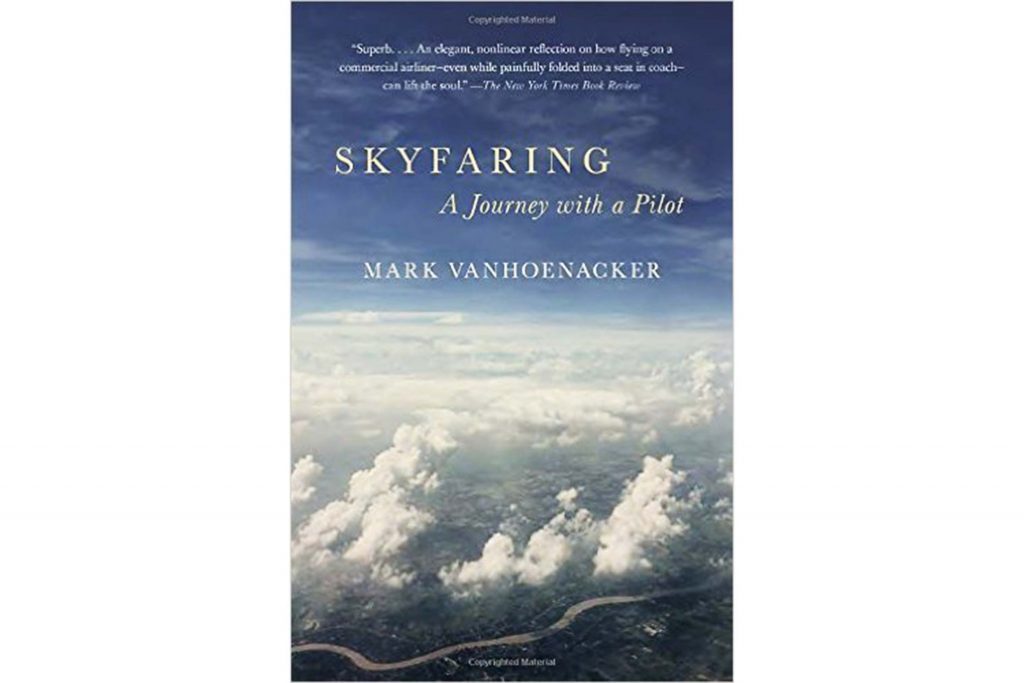 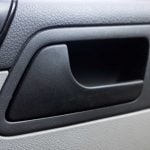