Money can't buy happiness, but as one Utah man learned, the act of giving it can make an indescribable difference. 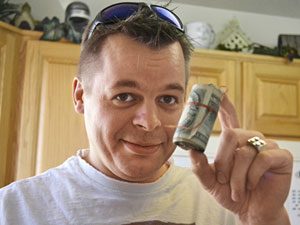 Photo: Courtesy Josh Ferrin“It was the afternoon we closed on our new house, and I was in the workshop of the garage. I noticed a scrap of carpet sticking out of the ceiling; that was strange. I pulled on it, and an access panel to the attic popped open. I grabbed a ladder and headed up.

“I climbed into a space above the workshop that was walled off from the rest of the attic. As my eyes adjusted to the dark, I saw a metal container that I recognized as a World War II ammo box; my grandfather used to store tools in ammo boxes on his farm. I opened the lid and freaked out at what I saw: several rolls of money tied up in orange twine. Holy cow, I thought, I’ve found, like $800. Awesome!

“But there was more than one box of money. I found another seven boxes full to the brim, plus two big black trash bags full of cash. In all, about $45,000. In my attic. I won’t lie, my first thought was that this was a blessing from God—the means to fix up this run-down house; to adopt a child, something we’d talked so long about doing; or just to use to make life easier for our two young sons, who were seven and four. But I knew as soon as I had indulged those fantasies that the right thing was to return the money to the prior owners. So I called them and asked them to drop by.

“They were shocked, of course, not only about the money but that I was returning it. They had recently inherited the house and said it must have been their dad who had hidden the money. What made him do it? I thought about the hundreds of times he had gone to his shop, cut off a length of orange twine, and bound up a roll of money. I like to think he did it for his children.

“There were balls of that orange twine still hanging on the wall of the workshop when we moved in. I used them to tie up Christmas presents last year, for my kids. I hope it reminded them of the gift greater than money that my wife and I gave them by returning the $45,000: the gift of radical honesty. We did the right thing, and our children will never forget that.”

Ferrin lives in Bountiful, Utah, with his wife and two kids. He is an artist for the Salt Lake City Deseret News.