No (real) wings attached: See how one man in a special suit can take to the skies. 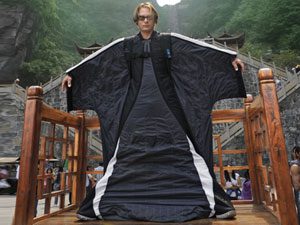 Photo: Courtesy Barry Holubeck“I like to go alone to a cliff on the backside of the Jungfrau, one of the tallest mountains in the Swiss Alps. You don’t need anyone else to help you jump off a cliff, just your wing suit and parachute. I usually sit for a few minutes near the edge, taking in a view that very few people ever see. Blue glaciers, green trees, white cliffs. If I listen closely, I can hear water flowing inside the glaciers.

“I check my gear and step over the edge. The first couple of seconds are a vacuum of time while you’re waiting for things to happen. I get about three seconds of euphoria and of complete calm and freedom from the rest of my life. Then I snap to attention because I have four seconds to save my own life.

“You’re falling at 35 mph. You want to get as far away from the side of the mountain as possible, so you angle your body away. It’s similar to diving into a pool—you want to do a swan dive, not a belly flop. Your head should be pointing a bit below the horizon.

“At four seconds, your wing suit inflates. Suddenly you’re not falling anymore, you’re flying. Really flying. You start to gain altitude, flying above the cliff where the birds are or skimming the tops of trees and the edges of rocky cliffs. By the ten-second mark, you’re going 120 mph. The cliffs that looked so snowy from a distance are rocky and jagged close up. The glacier is full of ominous deep blue cracks. You can fly along the side of the cliff for several minutes, or above it, in open space, for a little under two minutes. Emotions run from joy to anxiety. If you fly close to the wall, you’re thinking every second, staying in control of your position. It’s almost like you’re attacking the terrain, competing with it. Can you avoid crashing? Have you left enough time to open your parachute? But if you fly above the cliff in open space, it’s a feeling of complete freedom.

“You feel your heart beating harder as you pull the parachute cord—it’s like being on the edge of the cliff again, taking that first step into empty space. Once your chute inflates, that’s when the anxiety of concentration evaporates.”

Holubeck is a skydiving and BASE jumping instructor. He lives in San Diego, California. 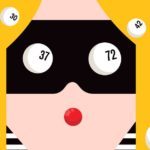 This Couple Agreed to Split the Lottery If They Won. When They Did, She Left with All the Money