All of that seemingly effortless Disney magic takes a lot of time, thought, and hard work.

We’re excitedly awaiting the re-opening of Disney parks and resorts this month from their months-long closure due to the COVID-19 pandemic. Anticipated to open on July 11, 2020, there will definitely be some changes to contend with—for instance, be prepared to make reservations for your favorite rides and attractions.

When you think of finally going to Disney World, a million happy thoughts flood your mind: amazing rides, Disney princesses galore, ice cream in the shape of Mickey’s ears… and haute cuisine? If you’ve ever heard of Victoria & Albert’s, then yep! This exclusive restaurant at the Grand Floridian Resort & Spa is truly one of a kind. It’s been an AAA Five Diamond Award recipient since 2000, which means the food is fantastic, the wine list is expansive, and reservations are hard to come by. You’ll want to make sure that you know these updated COVID-19 rules to dining at Disney before you go, though.

The restaurant is commanded by Israel Pérez, the maître d’ hôtel and head sommelier, who has been with the Walt Disney Company for more than 30 years. If you’re lucky enough to score one of Victoria & Albert’s 18 tables, you’ll certainly see Pérez, but he also works closely behind the scenes with Executive Chef Scott Hunnel. So, what does it take to run a five-star restaurant in the most magical place on earth? You’re about to find out.

What makes Victoria & Albert’s stand out

Victoria & Albert’s has been a Disney mainstay for 30 years, but that doesn’t mean anyone rests on their laurels. “We love embracing classics from the past, but to stay successful, we need to continue looking ahead to our future,” says Pérez. “In our business, you need to study history, and you need to know the classics but also need to learn all new techniques.”

For example, a recent menu featured a traditionally prepared sablefish served with crushed potatoes and dill, but it incorporated a modern element to make it unique. “The chef added a last touch of a layer of what he called ‘potato glass,’ a technique that takes 24 hours to complete by converting potatoes into a delicate and sheer ‘potato chip,'” Pérez explains. The drinks are equally innovative. Their take on a Manhattan uses a 20-year port instead of vermouth, homemade bitters, hand-carved ice, and cold-infused rye whiskey with maple and bacon; the bacon process takes a full 48 hours.

And then there’s the wine. The wine pairings that go along with the American-based menu are done by Pérez, and both change seasonally. The wine list is extensive, with more than 600 selections culminating in 4,200 bottles in the cellar of the restaurant, and some bottles go back decades. “The oldest wine on the list is a port from 1863—the same year as the Emancipation Proclamation!” says Pérez. 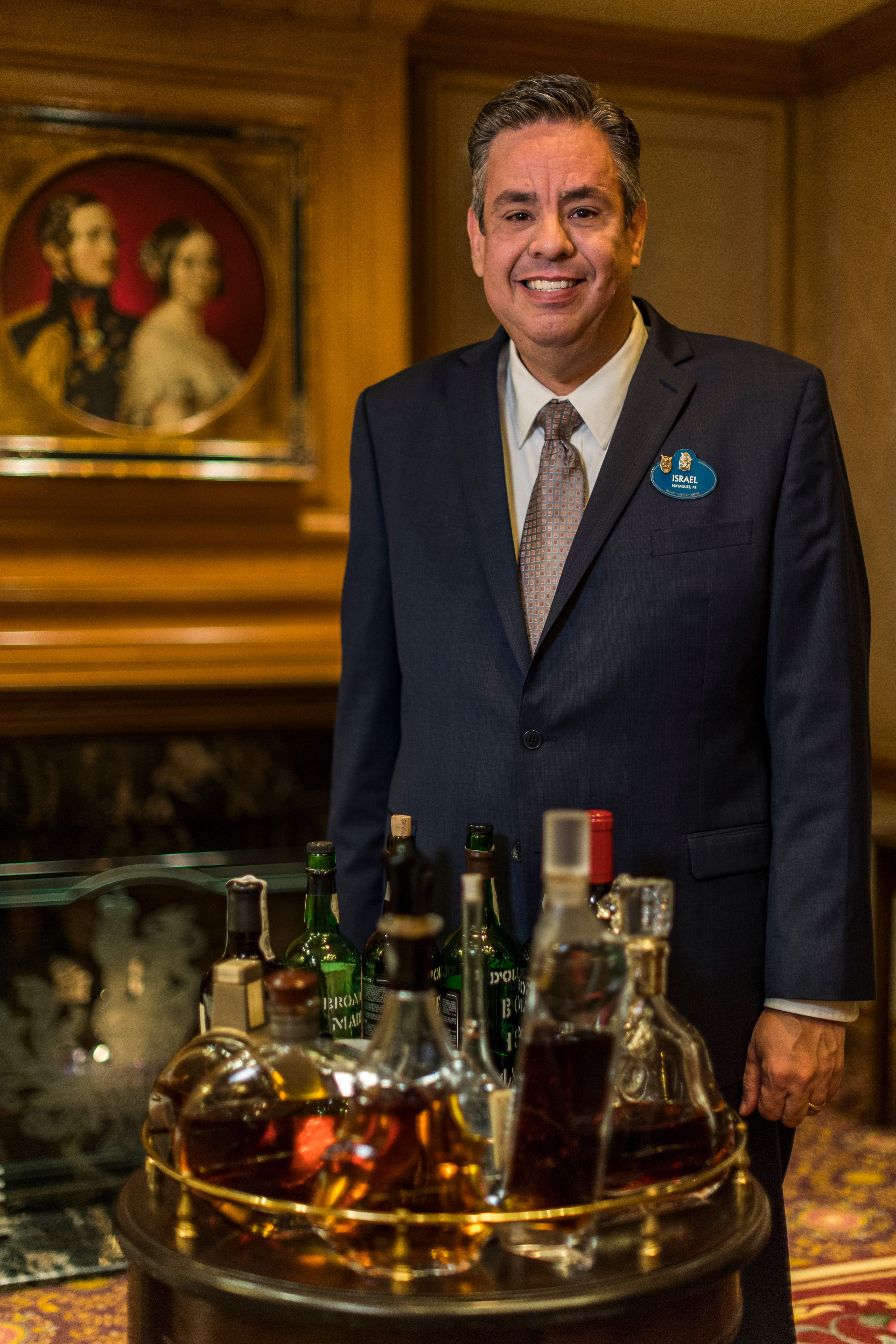 You can see why Victoria & Albert’s has been awarded not only the AAA Five Diamond but also the Forbes Travel Guide Five Star Award, one of only 26 restaurants in the United States to hold both honors. It’s also been nominated twice for the best service in the United States by the James Beard Foundation. Disneyland also has its own 5-star restaurant—and it’s got a rumored 14-year waiting list.

A day in the life

Dining at the restaurant is not just about having a meal—it’s about having an experience. The small dining room allows for very personal attention, and each server attends to an average of four guests for the entire evening. Pérez’s vision of the dining room is that of a dance: “I define ‘the dance’ as a graceful, synchronized, and meticulous rhythm with each server as they attend to our guests. There is a precision that is expected—from setting the tables and presenting each dish, to the angle in which trays are held. We strive for flawless attention to detail from beginning to end.”

Believe it or not, a single meal gets planned for more than a week in advance. “We start planning about ten days prior to each reservation when we verify confirmations,” Pérez explains. “We strategically pre-plan for details such as dietary requests, special celebrations, flowers, music, tables, servers, favorite wines, and menu greetings.”

While all of the workers have a different start time, depending on their responsibilities, the culinary prep team gets going at 7 a.m. and the chef arrives at noon. As for Pérez, he meets with the chef at 3 p.m. and his staff at 5 p.m. “Each guest is discussed—where are they are staying, how should we address them (e.g., Mr. and Mrs., Your Highness, General, Dr., etc.),” he explains. “We also discuss allergies, birthdays, anniversaries, local residents, repeat guests, first time at Disney, and any other information that may benefit the guest experience. We close our meeting with impromptu questions to check readiness.” After that, Pérez greets guests for the first two hours of the night, then becomes “part of the service with wine recommendations and pouring.”

Of course, the food is the real star of the show. “Nature provides us with all ingredients but life provides us with inspiration—traveling the world, memories from childhood, culture, or even reinventing the past,” says Pérez. For example, the mother of one of the chefs used to put an oyster cracker on the edge of his plate, as a symbol of “love and kisses from Mom.” He used that idea in a new dish that included a small savory pastry from the south of France, a barbajuan, shaped like an oyster cracker, and filled with Swiss chard and Mimolette cheese.

Pérez steps in after the menu is created for another round of collaboration. “[Chef Hunnel and I] both understand that Victoria & Albert’s is our legacy, and we constantly bounce ideas off each other until we come up with the right answers,” he says. After the recipes are created, the culinary team is open to slight changes, such as the addition of a sauce or the change of spice to benefit the final table presentation of food and Pérez’s wine selection.

Despite all of the change and innovation, there is one dish that’s never rotated off the menu at Victoria & Albert’s. “The turbot is the only dish that we maintain on the menu for each season of the year,” says Pérez of the fish dish with toasted capers and preserved lemon. Why? It’s a classic that’s become a much-requested guest favorite. On the other hand, these are the new foods you have to try at least once when visiting Walt Disney World.

The calm in the middle of the Disney storm

The best way to describe a night at Victoria & Albert’s? The cherry on top of a well-planned vacation. Even though it’s located in the vacation capital of the world, Pérez wants people to know one thing about the restaurant: “Everyone dreams about a beautiful romantic dining destination in a big city like New York, London, Rome, or Paris. In the middle of Florida, within the magic of Disney, you can find the same at Victoria & Albert’s.” The only issue is snagging a table—reservations book as far as 180 days out. If you miss your window, Disney insiders recommend checking back frequently as your date gets closer, because you never know when someone will cancel and a coveted spot will open up. For a truly magical trip, learn more insider secrets from a Disney World super-fan.

Hidden Gems for Grown-Ups at Disney

The Worst-Reviewed Restaurants in Disney

Where to Find Secret Spots in Disney Parks