Looking to disinfect your house and your stuff during the coronavirus pandemic? Here's what you need to know.

In the time of coronavirus, there are many theories floating around about what does and doesn’t kill the virus and other germs that can cause illness. We’re here with the definitive guide so you can feel confident that your house is truly clean—or if it isn’t, that you’ll know what to do.

Both viruses and bacteria can cause illness, but they don’t cause the same illnesses. And while all viruses are bad, there are both “bad” bacteria and “good” bacteria, such as the kind that live in our gut and digest food and that go into making things like cheese and yogurt. But whereas bacteria are living organisms, viruses are not; instead they require a live host, such as a human, in order to proliferate. That means that getting rid of bacteria and virus germs—whether in our bodies or in our homes—requires different methods. To treat a bacterial infection such as strep throat or a urinary tract infection, for example, doctors will prescribe antibiotics. To treat a viral infection, doctors won’t prescribe antibiotics because they’ll have no effect. Instead, doctors advise rest and drink fluids for a virus if it’s mild, and antiviral medications for cases that are more severe. We can get vaccinated to prevent both viral diseases such as chickenpox, and bacterial diseases such as tetanus. When washing hands and cleaning our surfaces, there are some differences in what works against bacteria vs. viruses.

The coronavirus that’s now shutting down the world, officially called SARS-CoV-2 (which stands for severe acute respiratory syndrome coronavirus 2), causes a disease called COVID-19 (which stands for coronavirus disease 2019). As its name indicates, SARS-CoV-2 is a virus, not a bacterium, and it can afflict pets as well as humans. That makes it related to other viruses that have hit humanity hard in the last few years, including AIDS, MERS, and SARS-classic, according to The Atlantic. Got all that?

What this has to do with disinfecting

Do soap and water kill bacteria? 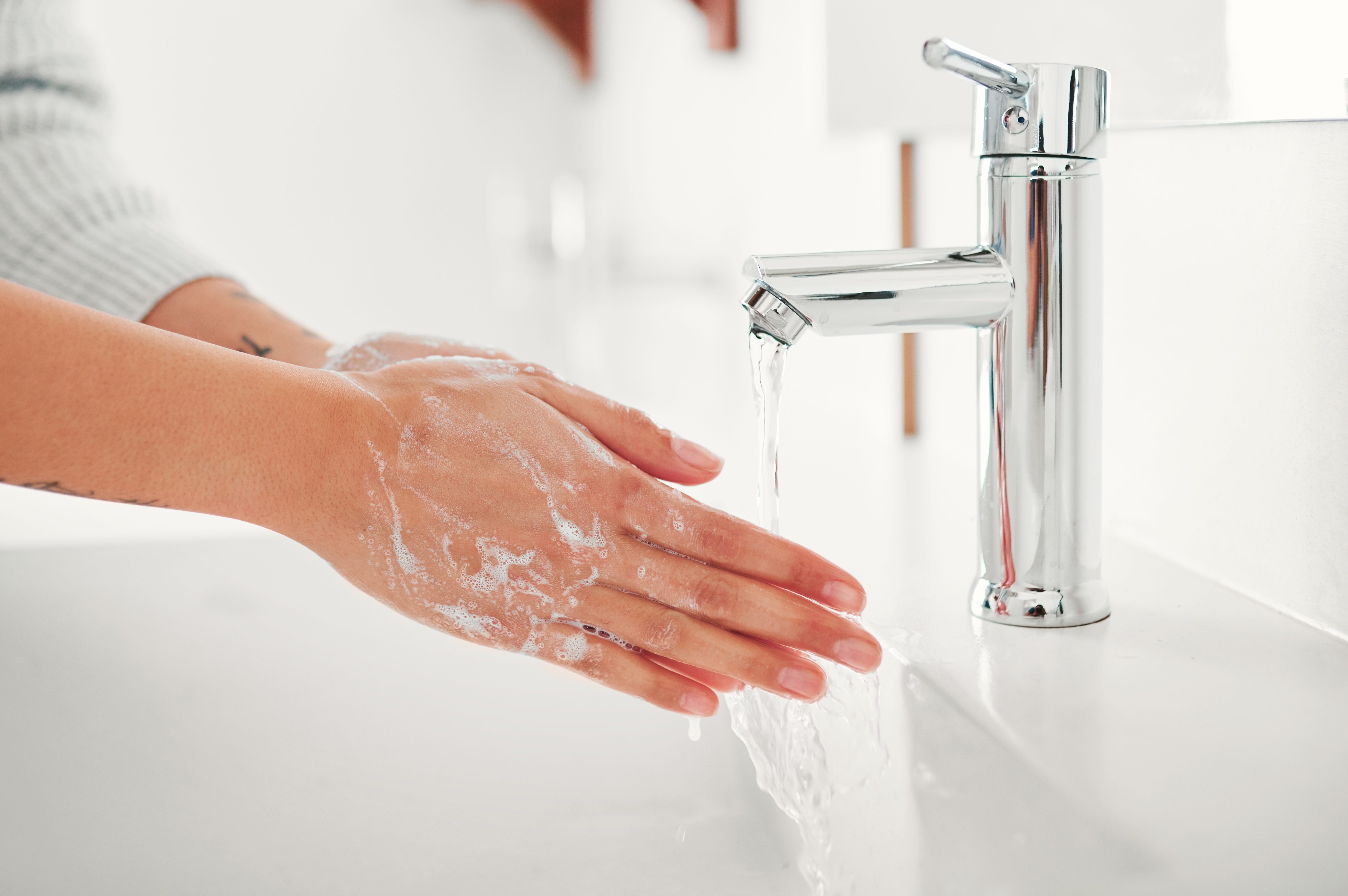 You’ve heard over and over by now that washing your hands is one of the single most effective ways to prevent the spread of the coronavirus—or any virus or bacterium. Here’s how it kills viruses: As The New York Times explains, a drop of soap diluted in water (yes, you need both for this method to be effective) works to quite literally pry the offending molecules apart, after which “essential proteins spill from the ruptured membranes into the surrounding water… rendering the viruses useless.” To disinfect fabric items, launder with a soap-based detergent. For hard surfaces such as countertops, the U.S. Centers for Disease Control and Prevention (CDC) recommends a two-step process—cleaning with soap and water, then disinfecting afterward, using an Environmental Protection Agency-registered household disinfectant such as a bleach mixture (more on that later). That’s because soap and water do not necessarily kill bacteria—they just mechanically remove it (sending it down the drain), so it’s less likely to cause harm.

Verdict: Soap and water are effective at removing bacteria and killing viruses.

On hands, hand sanitizer that contains alcohol (check the label), is considered a decent method of decontamination when it’s not possible to wash with soap and water, which is the gold standard. The CDC recommends a solution containing at least 70 percent alcohol for disinfecting surfaces such as phones and touch screens against SARS CoV-2. Studies show that isopropyl alcohol is a strong killer of bacteria.

Verdict: When used correctly, alcohol can kill bacteria and viruses.

The CDC recommends bleach for disinfecting, and it’s on the EPA’s list of substances that are approved for killing viruses and bacteria of all kinds, as well as fungi. Bleach must be diluted to the right strength, however, which is 1/2 cup bleach per gallon of water. To be effective, bleach must also sit on a surface for at least five minutes. Make sure to use it in a well-ventilated area, keep it out of your eyes, and whatever you do, never mix it with peroxide, ammonia, or acidic detergents used for cleaning, as the combination can cause toxic and lethal gases.

Verdict: When used correctly, bleach can kill bacteria and viruses.

Commercially available 3% hydrogen peroxide is a stable and effective disinfectant and can kill bacteria, viruses, yeast, fungus, and spores on hard, non-porous surfaces such as metal, glass and plastic, according to the CDC. It’s important to note that it requires 10 minutes of contact in order to be effective. Be aware that hydrogen peroxide can explode if it comes into contact with metals such as copper and iron at concentrations above 30 percent, and that it should never be mixed with vinegar or bleach.

Studies have found that certain types of vinegar can reduce the number of bacteria such as salmonella and the bacteria that causes tuberculosis, as well as the flu virus, if you apply it for 30 or more minutes, but that’s a lot of scrubbing time! There’s another downside: Studies have found that vinegar isn’t as effective at busting germs as chemical products such as Lysol and Bleach. Vingear is not registered by the EPA as an effective disinfectant and should not be used as one.

Verdict: Vinegar kills some bacteria, but not all. There is no evidence that vinegar kills viruses.

Ammonia from the bottle you store under your kitchen sink is not likely to kill SARS CoV-2, according to a Tufts University guide to disinfectants, and should not be used as a disinfectant; likewise, it’s not recognized by the EPA as a substance that will kill bacteria. That said, there are substances called quaternary ammonium compounds (QACs) in many disinfecting products—i.e., various Lysol and Clorox products—that appear on the CDC list of disinfectants registered for use against SARS CoV-2 and other viruses, including other coronaviruses, norovirus, rhinovirus, and poliovirus. But alas, your ammonia bottle does not contain a high enough concentration of these compounds to be effective. It does make a great glass cleaner, though.

Pine-Sol is effective against some bacteria—mostly gram-negative (which includes E-Coli), but only if it’s used in relatively high concentrations, according to ScienceDirect. You’ll also want to check the label to see how much actual pine oil is in the cleanser. Pine-Sol (the brand) contains between 8 to 12 percent pine oil, which should be effective, while imitations may contain mixtures derived from pine oil rather than pine oil itself, and those will be less effective. There is no evidence that pine oil kills viruses. Pine-Sol also contains ingredients that are highly toxic to the environment.

Heat is one of the easiest ways to combat bacteria and viruses, according to Jessica Samson of The Maids. “You can use your dishwasher to kill bacteria quickly,” Samson says, disinfecting pet bowls, scrub pads, and some plastic kids’ toys. Be sure to use the dishwasher’s sanitize cycle, a final rinse with a temperature of 150 degrees, which kills up to 99.99 percent of germs. Heat from your clothes’ dryer is also effective at killing viruses and bacteria, Saskia Popescu, a senior infection prevention epidemiologist at Honor Health in Phoenix told NPR. “One-hundred to 130 degrees Fahrenheit for 30 minutes in a dryer tends to kill most microorganisms on clothing.” While you’re at it, toss stuffed animals and blankets, along with any germ-infected laundry, into a hot dryer to sanitize the items. Just make sure to avoid putting these 14 things in your dryer.

Verdict: When used correctly, heat can kill bacteria and viruses.

Although the CDC does not have guidelines on using steam to disinfect—which is why it can’t be trusted against coronavirus, Samson uses a steam cleaner or garment steamer to disinfect carpets and other items that can’t go in the wash. “Steam can kill up to 99.9% of dust mites, germs, and bacteria,” she says. This includes E. coli, salmonella, staph bacteria, and other microorganisms. Steam cleaners turn tap water into deep cleaning vapor via heat. To be effective, the steam needs to heat to at least 175 degrees Fahrenheit and be applied for at least three minutes. Make sure you don’t use it on anything that may be damaged by heat, such as water-based paint or marble.

Verdict: When used correctly, steam can kill bacteria. There are no official guidelines on whether or not it kills viruses.

Verdict: Sage may kill airborne bacteria, but you’ll need to also need to disinfect surfaces. There is no evidence that sage kills viruses.

A time-honored home remedy to soothe sore throats and mouth sores, gargling may kill bacteria, but there haven’t been enough studies to definitively prove it, according to Medical News today. A study from 2010 found that children who gargled with salt water twice a day for three weeks had significantly reduced levels of bacteria in their mouths than those who used a placebo, and another 2010 study found that those who used a salt water gargle were less likely to suffer from respiratory tract infections. But don’t depend on it. The simple salt water gargle wasn’t as effective at killing bacteria as medical mouthwashes.

Verdict: There is no conclusive evidence that salt water gargles kill bacteria or viruses.

Next, read on to find out the 4 proven cleaners that kill coronavirus, according to Consumer Reports.

What Does EPCOT Stand For?