What to Eat While Watching ‘Downton Abbey’

After finally succumbing to the hype and watching two seasons (in two weeks) this summer, I’m hooked on the saga 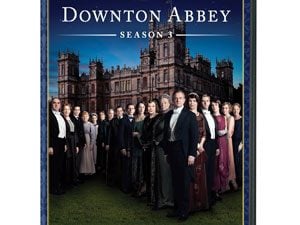 After finally succumbing to the hype and watching two seasons (in two weeks) this summer, I’m hooked on the saga of my favorite society family and their household help. The third season started last Sunday, and of course, watching a special show should include a special menu. What would Mr. Carson serve? (Mad Men was so much easier. Martinis. Repeat.)

According to the Boston Globe, here’s what an authentic Downton-era meal would include:

“A formal upstairs dinner would have consisted of hors d’oeuvres, two kinds of soup, two kinds of fish, an entree, a joint (large cut of meat), a roast (typically game birds like pheasant or grouse,) vegetables, a hot dessert, ice cream and wafers, fresh and dried fruits and nuts, and coffee and liquers.” Whew!

Then there’s aspic: a big, big deal in aristocratic dining rooms. Apparently the aspic shown on camera is unseasoned and just has to look pretty—no one is going to be tempted to eat it, after all.

After perusing all manners of dishes that are, as the Dowager Countess would say, “Not to my taste,” here’s my choice: these smoked salmon pinwheels and Yorkshire puddings from the chef at Downton Abbey Cooks. Of course, if I was really channeling Downton, I’d order take-out and leave all of the work to someone else!