What’s All This About a Trillion-Dollar Coin? 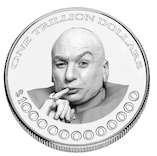 I was still recovering from a nasty case of Fiscal Cliff Fatigue when my current-events radar started picking up vague references to a “trillion-dollar platinum coin” that was somehow connected to the looming debt-ceiling crisis our elected officials have prepared for us as a kind of late (and awful) Christmas gift.

At first I figured it was another brilliant piece of satire from The Onion. But no. Despite the fact that the idea seems to have originated with a 1998 episode of The Simpsons, the creation of a single trillion-dollar platinum coin by the U.S. Treasury would actually be a legal solution to the aforementioned debt-ceiling crisis. As this very thorough piece on The Atlantic’s website explains: “It sounds nuts. But there’s a loophole that actually lets the Treasury create coins in whatever value it wants, even $1 trillion. It’s all straightforward enough. The Treasury would create one of these coins, deposit it at the Federal Reserve, and use the new money in its account to pay our bills if the debt ceiling isn’t increased.”

Now, I enjoy a good joke as much as the next frustrated and perennially-annoyed voter/taxpayer. And I even have a couple of ideas about what the coin should look like (How about putting this guy on it?). But I can’t help but see this coin business as yet another pointless distraction from the serious business of fixing our broken economy. This piece in the Washington Post puts it well : “The best reason to oppose the platinum coin idea is this: It is not the way we do business here in the United States. It is the kind of insane, seemingly extra-constitutional gambit one expects of banana republics, not the wealthiest and most powerful nation to ever stride the earth. It is demeaning to all of us.”

A penny for your thoughts, dear reader.