Antibiotic overload can lead to drug-resistant bacteria—a potentially fatal problem. Learn when you really need antibiotics, and when to skip them. 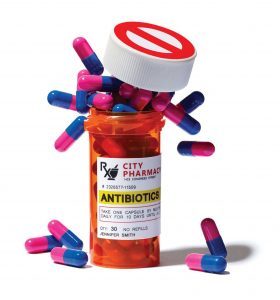 Despite all our knowledge that antibiotics don’t kill viruses and the undeniable risk of overuse to public and personal health, doctors routinely prescribe antibiotics when the drugs aren’t necessary, found a recent Consumer Reports survey of 1,000 adults. This can lead to the growth of “superbugs”—bacteria that can’t be controlled even with multiple drugs—and serious consequences.

MRSA and other resistant bacteria infect at least two million people in the United States annually, killing at least 23,000. Several major medical organizations, including the American Academy of Family Physicians and the American Academy of Pediatrics, have recently tried to correct antibiotic misuse by explaining when the drugs are and aren’t needed.

1. Ear infections
When to say no: Most ear infections improve without drugs, especially in children two and older. Wait two to three days to see if symptoms subside.
When to say yes: Drugs may be needed right away for babies six months and younger with ear pain, children from six months to two years with moderate to severe ear pain, and children two and older with severe symptoms.

2. Eczema
When to say no: Antibiotics don’t relieve most causes of itchy, red skin. Instead, moisturize or ask your doctor to recommend a medicated cream or ointment.
When to say yes: If there are signs of a bacterial infection, such as bumps or sores full of pus, honey-colored crusting, very red or warm skin, and fever.

3. Eye infections
When to say no: Doctors often prescribe prophylactic antibiotic eyedrops after treating eye diseases, such as macular degeneration, with injections. But antibiotic drops are rarely needed after such procedures and can irritate your eyes.
When to say yes: If you develop a bacterial eye infection, marked by redness, swelling, tearing, pus, and impaired vision.

4. Respiratory infections
When to say no: Colds, flu, and most coughs and cases of bronchitis are caused by viruses. Strep throat is bacterial but accounts for only about one third of cases in children. If you suspect strep, get tested to find out for sure.
When to say yes: If a cough lasts longer than 14 days or a strep test comes back positive.

5. Sinus infections
When to say no: Sinusitis is usually viral. Bacterial sinus infections often clear up in a week or so even if they are not treated.
When to say yes: If symptoms are severe, don’t improve after ten days, or get better but then worsen.

6. Urinary tract infections
When to say no: For older patients, particularly those who live in long-term-care facilities, doctors often prescribe antibiotics when a routine test finds bacteria in urine. But if patients don’t have UTI symptoms, the drugs won’t help.
When to say yes: You have symptoms: burning during urination and a strong urge to “go” often.