Why Are Elections Held on Tuesdays?

With millions without power in areas affected by the devastating Hurricane Sandy, the Wall Street Journal asks an interesting question: could a 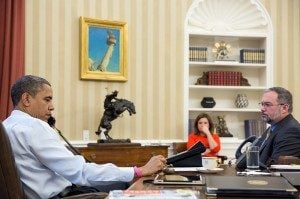 The answer is nearly a definite no, as states still have days to correct any storm-related issues at polling sites, but it does make you think. What if voting were moved to weekends? Wouldn’t that be more convenient?

In 1845, Congress officially declared Election Day the Tuesday after the first Monday in November (NPR has the fascinating story here). America was mostly agrarian then, and Tuesday was the obvious choice because Monday meant voters would have to travel by buggy on Sunday, the Sabbath, and Wednesday was market day. November was selected as it marked an opportune break between the harvest season and winter months.

The article cites two recent attempts to change the vote. After September 11, 2001, the primary election date in New York was postponed by two weeks. Also, in 2004, the House passed a resolution declaring that elections would not be postponed in the event of a terrorist attack.

Holding elections on Tuesdays is a significant American tradition, and even if we could vote on a Saturday, aren’t we used to voting on Tuesdays by now? Let’s check back in four years.