If you’re on the fence about visiting Disney during the pandemic, you might not be after reading this.

Like everything else in our new normal, Disney World is different these days. But “different” isn’t necessarily bad. After shutting its gates in March due to coronavirus, Disney World reopened in mid-July with a well-thought-out plan to keep guests, cast members, and the larger community as safe as possible. From cleaning and disinfecting regularly to introducing new safety protocols, here’s what you need to know if you’re planning a trip to Disney right now. But the real question is: Should you plan a trip to Disney World right now? According to the Disney visitors we spoke with for this story, the answer is a resounding yes! Despite the fact that some experiences are on temporary pause to accommodate physical distancing and other safety measures, they say the magic of Disney is still alive and well—and that, in some ways, their recent trips were actually better than previous ones. Here’s why. 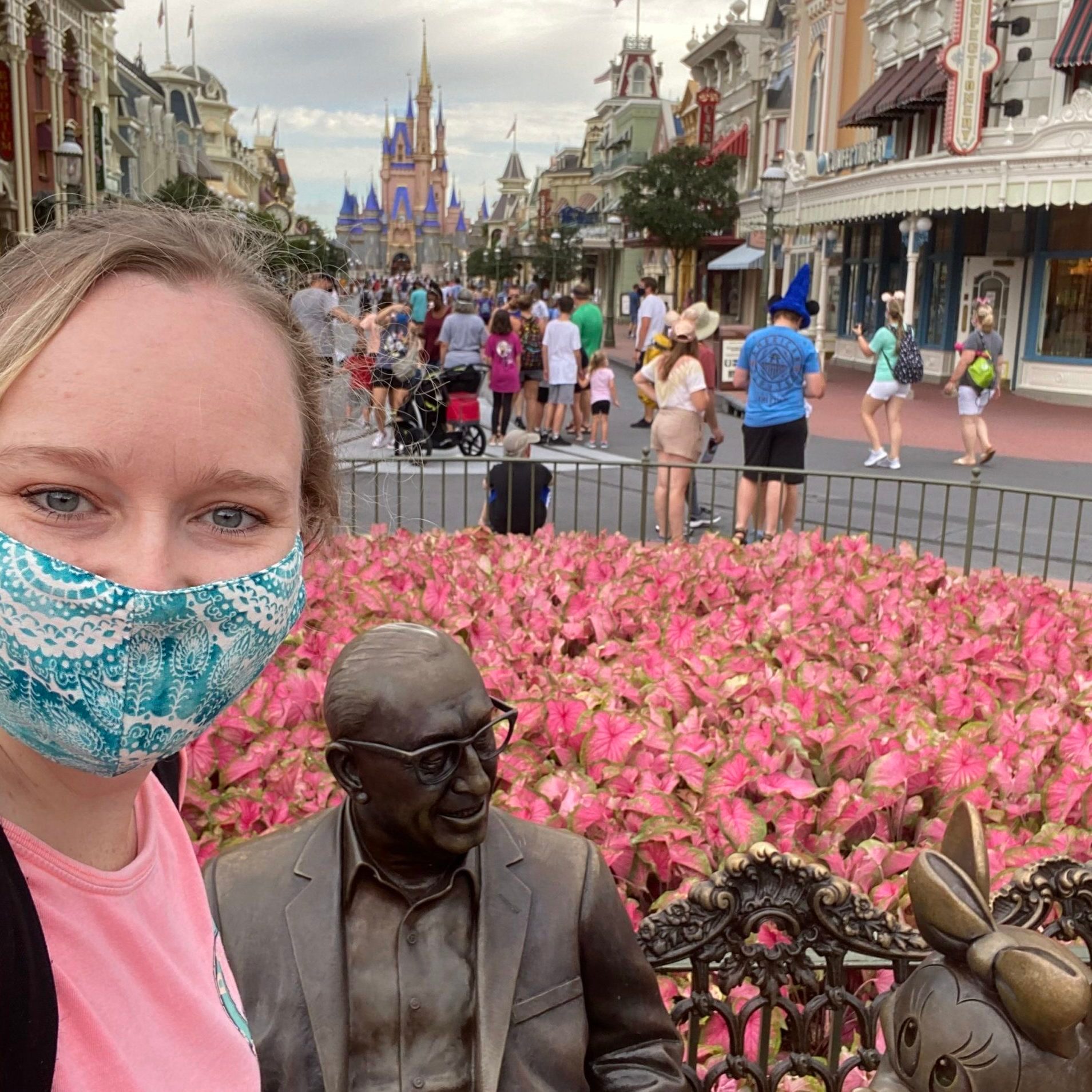 Courtesy Jamie MayfieldIf you’ve ever planned a trip to Disney, you likely spent a ton of time researching which rides you should go on when and devising a solid plan so that you could avoid long wait times at the most popular attractions. Well, lines are something you’ll have to worry about a lot less now, according to Jamie Zimmerman Mayfield, who visited Magic Kingdom and Epcot with her 13-year-old in July. Even though they hadn’t booked FastPasses three months prior (like typical Disney goers pre-pandemic), the two managed to do everything they wanted—even with the reduced park hours. “Our longest wait was about 20 to 25 minutes,” she says, “and that was only for two rides: Frozen and 7 Dwarfs Mine Train.” Not ready to book your trip just yet? Here’s how to take over 20 of the best Disney World rides virtually.

Time to notice the details

Jennifer Ingalls, who traveled to Disney from Colorado, loved that she had the opportunity to notice all the little details that one might overlook when the park is at regular capacity. “I’m an avid park goer, and I attempt to go at least once a year. Usually, it’s [about] how many rides we can squeeze into a day,” she explains. “This time, we went on rides multiple times and just walked around from place to place, taking it all in. I wasn’t getting run over by strollers, and there weren’t thousands of people on top of each other.” When you visit, see if you can spot all the hidden Mickeys in Disney World’s new ride.

The highlight of Ingalls’ trip: seeing the castle for the first time after months of quarantine—and after having COVID in March. “I remember watching Disney videos to make me happy and crying while thinking, What if I never experience it again?” she says. “So when we walked through the tunnel on Main Street and cast members were standing there saying, ‘Welcome back,’ I literally bawled my eyes out.”

Feeling safe while having fun

Disney may be the most magical place on Earth—but a lot of work goes into making it that way. And they’re taking safety seriously, more so than some other vacation destinations around the country, which made Jessica Hudak of New York feel extremely comfortable when visiting. “Social distancing was enforced, as well as masks. I brought so much sanitizer and wipes and only used them to wipe down my seat and tray on the airplane,” she says. “[At Disney], there was sanitizer everywhere, and every time we got up from a table in the parks, someone would clean.” Hudak also noticed temperature checks for everyone entering the parks. By the way, Disney is making adorable character face masks—and donating the profits. 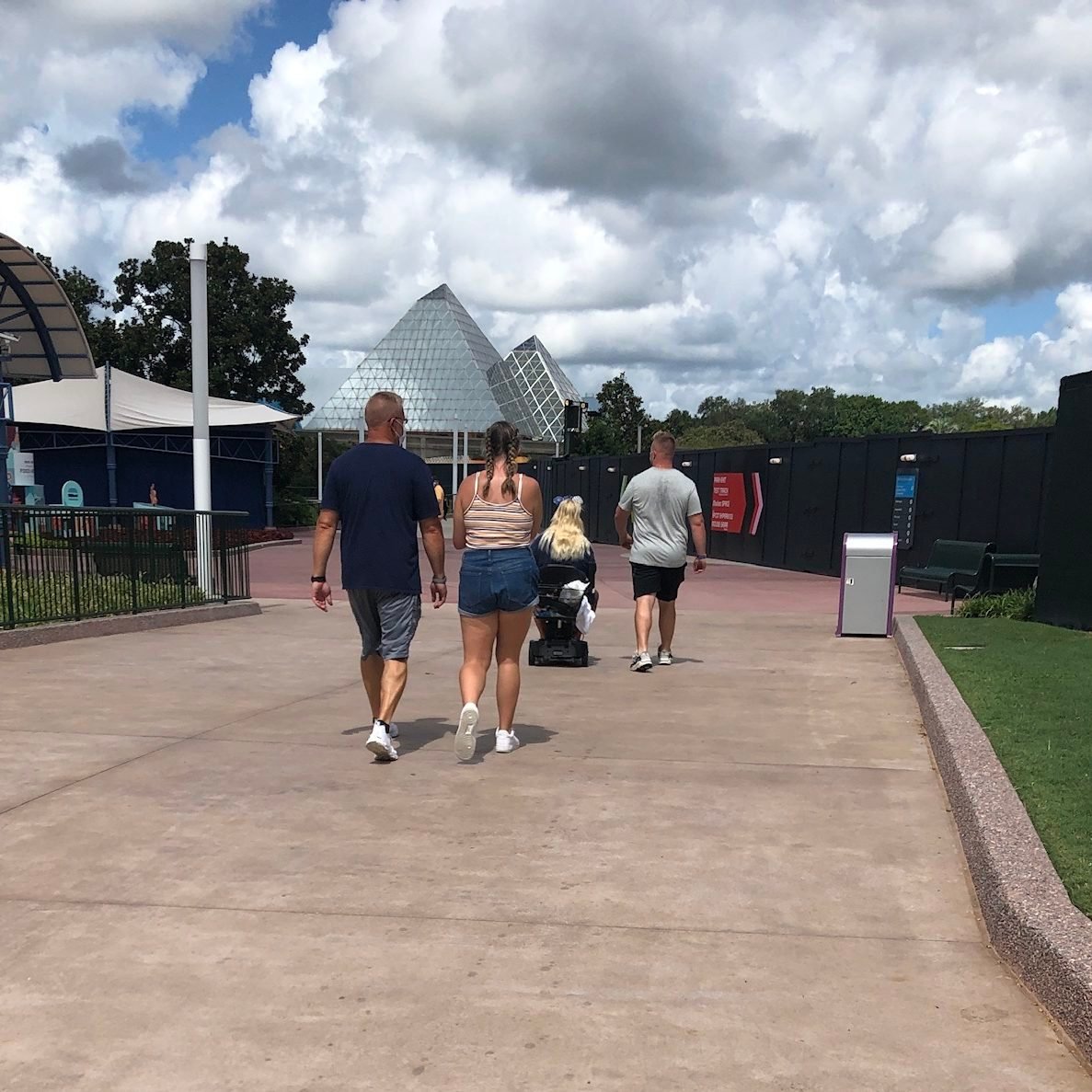 Courtesy Vanessa TorresOne look at the news and you’ll see a slew of stories about people out and about, living their best lives without masks, social distancing, or any regard for others. But that’s not what Vanessa Torres of Illinois found during her trip to Disney. Not only were the lines short—especially for Rise of the Resistance—but Torres was happy with the way both guests and employees conducted themselves. “Nothing made me sad or uneasy because everything was well organized and mostly everyone was following the rules,” she says. “I felt completely safe in my decision to go.”

A peaceful version of Disney 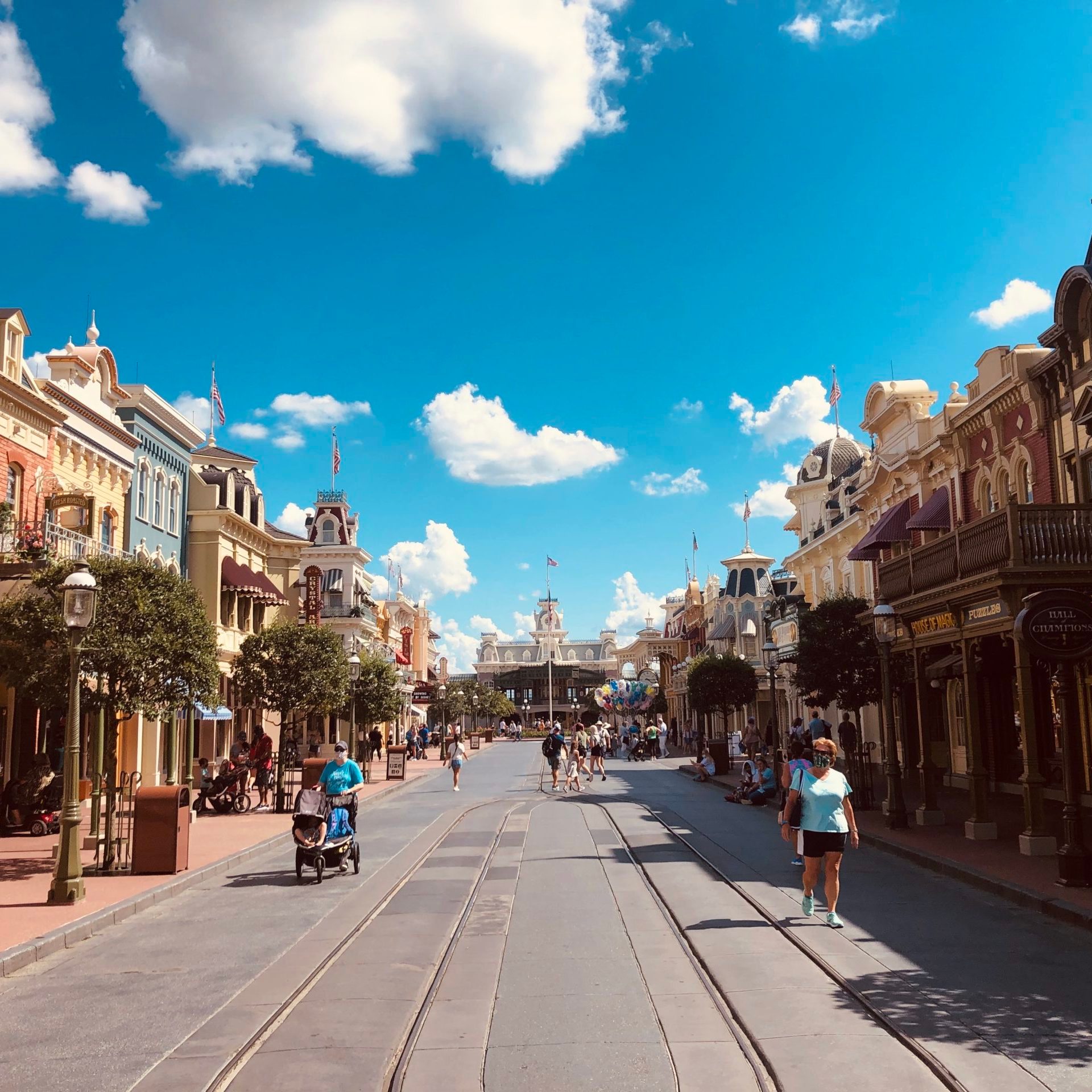 Courtesy Dennis Minner/MinnerPhotography.comDisney is a lot of wonderful things, but peaceful? That may not be the first word that comes to mind, but it is now, according to Dennis Minner Jr. of Missouri, who took his 13-year-old daughter to Magic Kingdom and Animal Kingdom on a daddy-daughter vacation in August. “It was so incredibly peaceful! We were able to just simply enjoy the magic of Disney,” he enthuses. “The crowds were nonexistent, so we noticed the intimate details of the decor, the sounds and smells like never before. We rode more rides the last two days than our last four trips combined!” On your next visit, check out some of the hidden gems for grown-ups at the Disney parks.

Lisa Mowder Burgess and her family generally visit Disney World about five or six times a year. When asked how going during the pandemic compares, she says, “It’s different, but not a bad different.” In fact, Disney is working hard to keep guests smiling with novel experiences like pop-up parades, since the regular parades are on hold for the foreseeable future. “At Magic Kingdom, they have some where the characters are on floats and there are dancers in the front and back, like a small section of their ‘normal’ parade. They also have characters (Gaston and Merida) riding on horses, or some characters on a trolley pulled by a horse or a double-decker bus,” she explains. “At Animal Kingdom, the characters and musicians are out on a boat. And at Epcot, Anna was in a carriage and Elsa was walking in front. It’s just so exciting to not have a scheduled time of when [the parades] will come. The music just gets louder, and then you’re like, ‘Yay! Something special’s going to happen!'” For some Disney magic wherever you are, try these 12 Disney recipes you can recreate at home.

Getting on the most popular rides 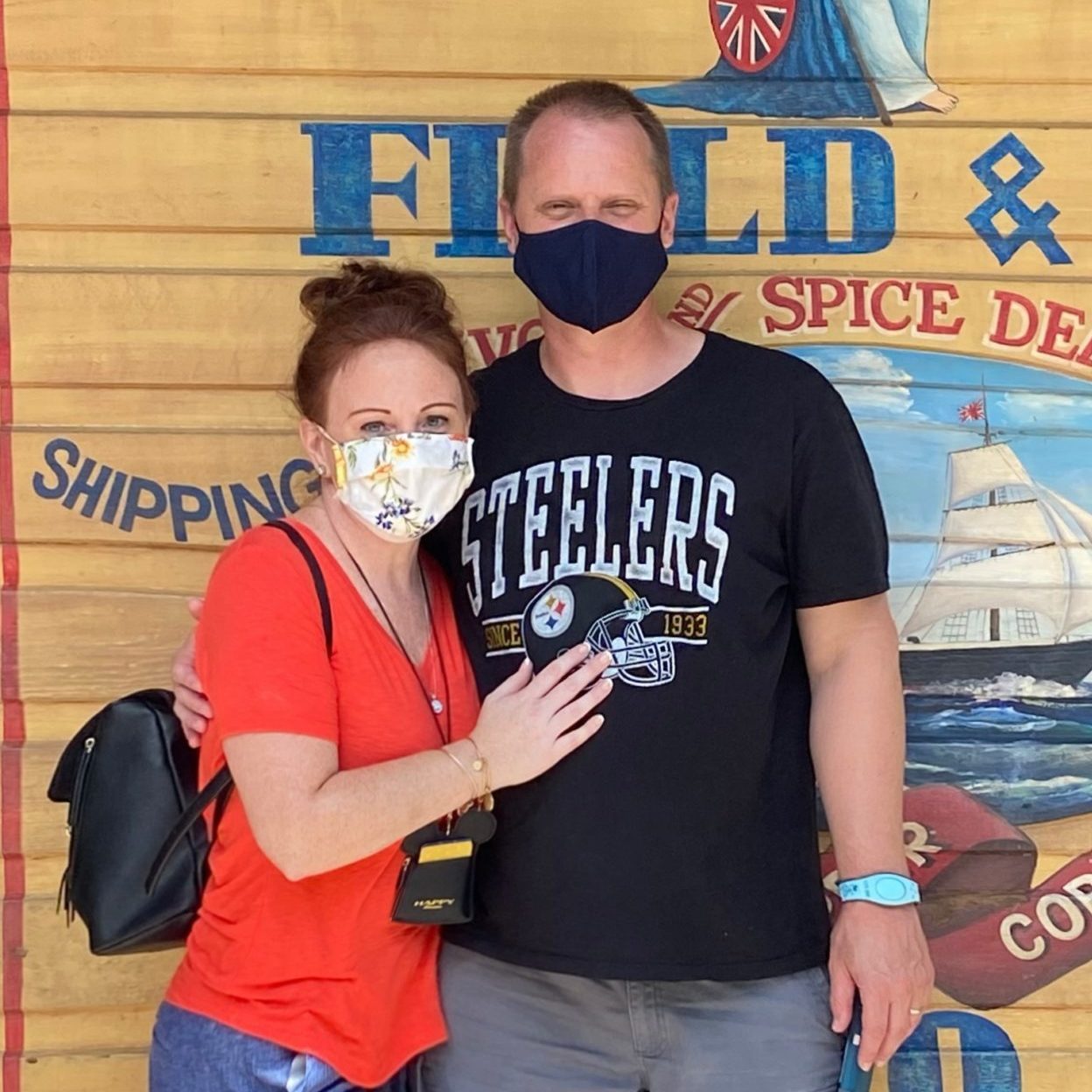 Courtesy Carley BrownFor Patric Oesterheld, the decision to plan a Disney vacation didn’t come easy. “We debated going, but we ultimately decided that Disney was following the practices that we were at home,” he explains. “If someone was considering going, my advice would be to enjoy it. It’s a little different, but it’s still Disney magic.” And some of those differences actually made the trip better. Case in point: getting to experience the uber popular Avatar Flight of Passage in Animal Kingdom in a whole different way. Pre-pandemic, the wait time for this one ride could be anywhere from four to seven hours. During this past trip, Oesterheld says it took longer to walk the queue than to get on the ride. While we’re on the subject, do you know which Disney ride is the most popular around the world? (Hint: It’s not this one or Space Mountain!)

No random people in your pictures

Tracy Allred loved her recent visit to Disney. “It was fantastic. I feel like we had a way better experience than if we would have gone during normal times,” she says. Allred particularly appreciated the short wait times, lack of crowds, and getting pictures with no people in the background.

Plus, the lack of crowds helped the employees do their new jobs in this new normal. In addition to providing hand sanitizer before and after rides, the rides were periodically shut down for cleaning. “There are social-distancing markers everywhere,” she adds. “We felt totally safe. And the minor inconvenience of wearing a mask is worth having a blast and riding all your favorite rides multiple times in a row with minimal wait times.” Next, find out what Disney employees aren’t allowed to do anymore.

For more on this developing situation, see our comprehensive Coronavirus Guide.

What to Know About Staying at Disney Now

Ysolt Usigan
Ysolt Usigan is a lifestyle contributor who has written about home, food, health, beauty, style and parenting. You may have seen her work in Shape Magazine, SheKnows.com, TODAY.com, WhatToExpect.com, CafeMom.com, Chewy.com, HuffingtonPost.com and Health Magazine.