Why Do Dogs Lick Their Paws? 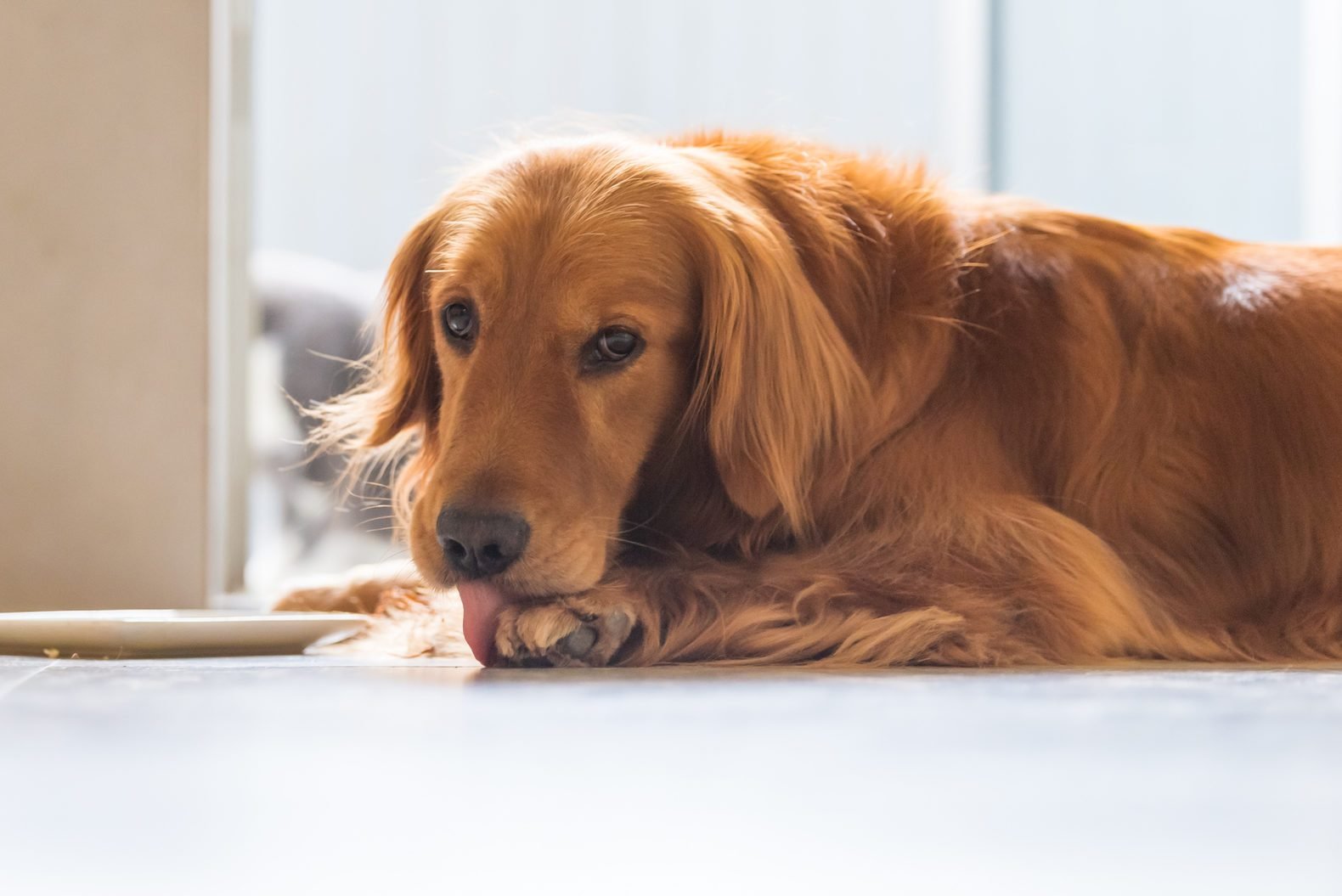 Most dogs can be spotted licking away—or even chewing—at their feet. Is it a reason to worry? Sometimes. Here's what you need to know about this common but puzzling behavior.

If pet parents know anything, it is this: Dogs do a lot of weird stuff. (Butt scooting and head tilting, anyone?) And among the most often-spotted perplexing behaviors is a dog licking his paws. “It’s normal behavior for dogs to lick their paws occasionally. However, when a dog licks their paws constantly or concentrates on licking just the paw area, it may be a sign that something is wrong,” cautions RuthAnn Lobos, DVM, lead veterinarian for Merrick Pet Care in Hereford, Texas. Before you chalk it up to simple grooming, check out these seven reasons that can explain this common canine habit—and what you should do if you suspect a problem.

This is the first possibility to rule out, according to the American Kennel Club (AKC). Stepping on glass or a thorn, breaking a claw, being stung by a bee, or getting burned on hot asphalt are just a few things that may have happened to your pup to cause this behavior. “For example, on the West coast are little plants called foxtails. The seeds can actually burrow into the skin in between their toes,” says Gary Richter, DVM, founder of Ultimate Pet Nutrition. A boo-boo is especially likely to be the culprit if the licking starts out of nowhere. Take a good look at each nail, in between your dog’s toes and pads, and the top of his feet. Depending on what’s wrong, you may be able to take care of it yourself with a good canine first aid kit. If you have any doubt, though, check in with your vet.

Fleas, ticks, and mange can irritate and itch like crazy anywhere on your dog’s body, including, of course, his feet. Especially during the summer months, parasites could be the cause of your dog licking his paws. Numerous treatment options are available for canine parasites, per the AKC. Your veterinarian can help you decide which is the best one for your dog’s particular situation. If it turns out you have a flea infestation, these home remedies for fleas are worth checking out.

It may not be intuitive, but food allergies are known to cause itchy paws in dogs. While it’s unclear exactly why the paws specifically seem to be affected, this is among the first things vets look to in cases of a dog licking paws. “In those cases, you should talk with your veterinarian about which type of food might be best for your dog,” advises Dr. Lobos. “Some pet parents find that a complete and balanced diet that is made with fewer ingredients or a single source of animal protein can help.” Here are the foods vets buy for their own dogs.

A dog who is continuously licking his paw may be experiencing pain—but not necessarily in the paw. Per the West Suburban Humane Society in Chicago, many dogs that feel pain anywhere in their body will lick a front paw as a means of coping with it. It may take a while to figure this out, since dogs, like many animals, attempt to conceal their pain. But, especially if nothing else seems to be the cause, it’s worth bringing up to your veterinarian.

Dermatitis in dogs can be triggered by an allergic reaction to something in their environment. Lawn chemicals, rock salt or other de-icing products, or weeds and plants are the usual suspects. If you notice your dog licking his paws only during one season or weather pattern, dermatitis may be the cause. “Dogs can be affected by pollens, grasses, and molds just like we are,” notes Dr. Lobos. Cleaning your dog’s feet after every walk with wipes made for that purpose may help, and “regular bathing with an appropriate dog shampoo can also be very, very helpful,” adds Dr. Richter.

Boredom or anxiety can show up as a dog licking paws, according to the West Suburban Humane Society. Don’t go by appearances here. Even high-energy dogs can be bored, and pups that seem calm can be anxious under certain circumstances. In fact, these 9 unexpected things can trigger dog anxiety. Consulting with a dog trainer or behaviorist on a treatment plan can solve the root cause of such licking. And the earlier you catch it, the easier it will be to correct, add the experts at West Suburban.

If your dog happens to be a greyhound, this is a definite possibility. Greyhounds are virtually the only breed that gets corns, due to the unique way their feet are formed. They can be really uncomfortable for your dog, causing him to lick the affected paw. Special booties can alleviate them, as can avoiding walking your dog on pavement and other hard surfaces, according to the National Greyhound Adoption Agency.

An important note: No matter what the reason for a dog licking his paws, the moisture can cause a bacterial or yeast infection, says the AKC. In other words, the licking itself can turn into a second problem on top of the first. So aim to pin down the cause and solve it with your veterinarian—sooner rather than later. “I recommend visiting your vet if your dog continues to lick, chew, or bite at the pad after trying to get them to stop or if your dog is guarding their paw,” says Dr. Lobos. If you have a light-colored dog, one way to know that he is licking excessively is looking for fur discoloration. “They get what’s called saliva staining on their fur,” says Dr. Richter. “The fur will actually turn a rusty color where they’re licking.”

Next, learn the 10 signs your “healthy” pet is showing dog illness symptoms. 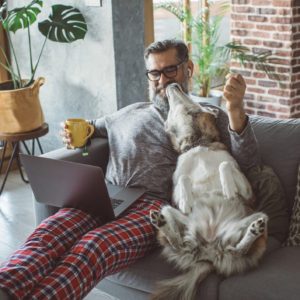 Why Do Dogs Lean on You? 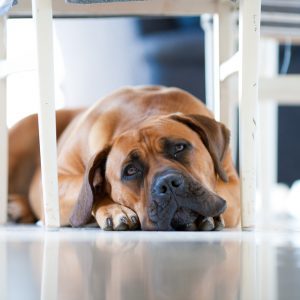 Silent Signs Your Dog Is Depressed 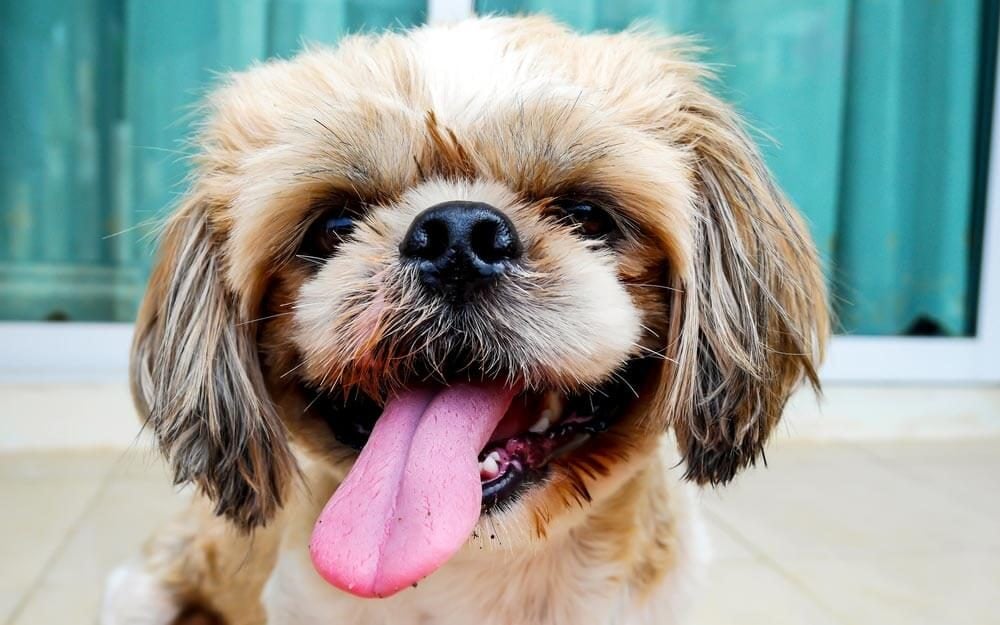 Things Your Dog Actually Wants from You 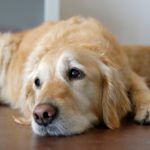 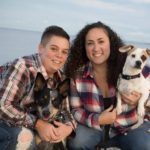 CBD Worked Better Than Antidepressants to Calm My Dog’s Anxiety