Dogs go barking mad over the high-pitched peeps and shrieks of squeaky toys. If you’ve ever wondered why that darn squeaking is so appealing to our pups, you’re in the right place!

There are some things we definitively know about dogs, like what it means when a dog licks you or why dogs get the zoomies. We also know they love their toys. It’s one of life’s simple pleasures to watch our pups happily chew and toss around their favorite indestructible dog toy or try to uncover the treats in a challenging puzzle toy. But when it comes to those coveted toys, there’s one thing that confounds many people: What’s the appeal of squeaky toys? To mere humans, they’re kind of annoying. Yet, dogs can’t get enough of them. It’s crazy how many times a dog can make a toy squeak in an hour and then return to it later like it’s a new toy! So, why do dogs like squeaky toys so much? Here’s what the experts say.

The thrill of the chase

Here’s one popular theory shared by canine experts as to why dogs love squeaky toys: The squeaks sound similar to the prey they are hardwired to hunt and kill. Of course, the dogs we have as pets today don’t have to hunt for food; their food is conveniently ready-to-eat in a bowl each day. Still, that instinct is in their blood. “Lots of breeds have histories that involve chasing and catching such small animals,” says veterinarian Matthew McCarthy, DVM, founder of Juniper Valley Animal Hospital in Middle Village, New York. For example, Labradors and Weimaraners were bred as gun dogs, and adorable small dog breeds like the Yorkshire Terrier were once used to chase and kill rodents. “Watching your dog tear into, shake silly, and disembowel a stuffed squeaky toy until it is ‘dead’ certainly is evidence of this theory/mechanism at work,” notes Dr. McCarthy.

The theory is further reinforced by watching non-hunting breeds. The Samoyed, a sled dog, isn’t as likely to be interested in squeaky toys because it was bred to stay focused on the trail and not be distracted by small creatures nearby. But Dr. McCarthy points out this isn’t a hard-and-fast rule, as some breeds, regardless of their ancestral past, may still love squeaky toys.

Think of it this way: When something feels good and is fun to do, you want to keep doing it. The same is true for dogs, of course. When a dog chomps down on a squeaky toy, they hear a sound that triggers an immediate gratifying auditory reward. “Several studies have shown that certain sounds like those a squeaky toy makes trigger reward centers in the brain to release the feel-good chemical dopamine—much like a runner’s high,” says Dr. McCarthy. Those happy feelings encourage your pup to return to the squeaky toy repeatedly, instilling a feedback loop. That makes sense! Now learn the reasons behind some other weird dog behavior, like why they love rolling in stinky things.

It’s an invitation for you to play

Pet parents can pick up certain communication tactics from the subtle cues of a dog’s tail to the more obvious signs of an anxious dog hiding under the bed. But other messages from our pups are more cryptic and charmingly clever. Have you ever noticed that your pup often likes to play with the squeaker toy right next to you? There may be an ulterior motive for that. According to Dr. McCarthy, as soon as we engage with them by picking up the squeaky toy, it releases dopamine and oxytocin, which cements their bond with us. “When the dog interacts with the squeaker toy, she is reinforced both by the toy itself as well as with attention from the person,” adds Karen Sueda, DVM, a veterinarian at VCA West Los Angeles Animal Hospital. By the way, this is what really happens to your dog when you say “I love you.”

A squeaky squirrel has a tail your pooch may love to swing around and chomp on to make it squeak. Or maybe he goes nuts over his favorite goose toy, wildly shaking it to activate the squeaking sound. You’re not imagining it: Your dog likely loves this pastime because these toys look and sound like real prey. And it’s not just the resemblance of prey or the ear-piercing shrieks that makes this so appealing. Dogs like squeaky toys because they go back to that instinctual nature of hunting, killing, and tearing up the prey. “The squeaker hiding inside comes to somewhat mimic the internal organs of critters,” says Adrienne Farricelli, a certified professional dog trainer at Brain Training for Dogs. “No wonder Rover is so intent biting into it! It squeaks like an animal, and on top of that, it’s so fun to unstuff and disembowel—much to the owner’s dismay.” 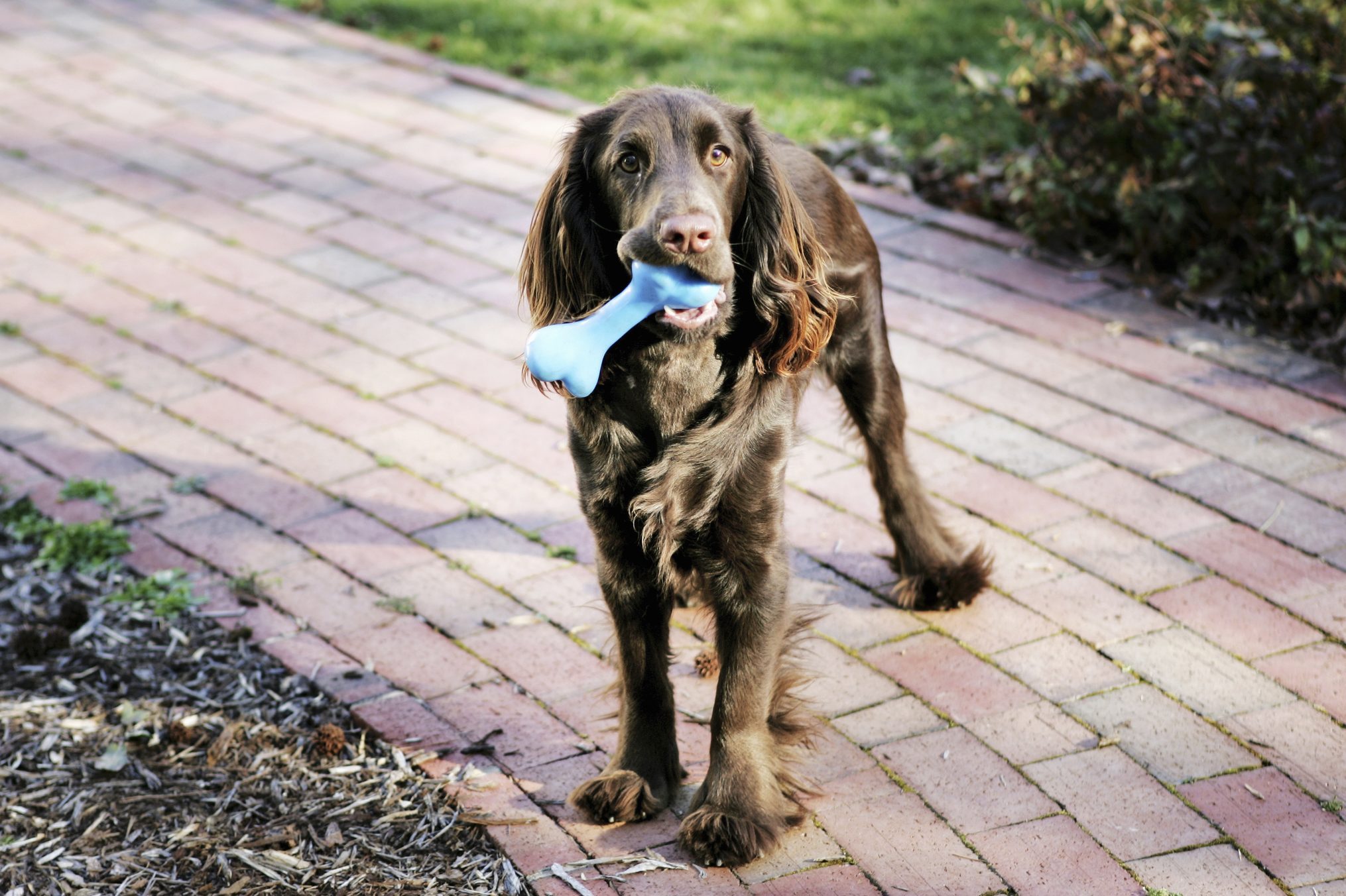 Still, some dogs aren’t fans of squeaky toys, no matter what they sound like. “If the dog shies away or seems fearful when you squeak the toy, the sound may bother her,” Dr. Sueda explains. It’s no big deal from an entertainment perspective if your dog doesn’t enjoy playing with squeaker toys, but the lack of interest could point to other mental and health woes. “If the dog experiences a lot of sound sensitivities, consult with your veterinarian about ways to address your dog’s more general fear of noises,” advises Dr. Sueda. Also, your pooch may have dental or oral pain that prevents him from chomping down to activate the squeaker. FYI, here’s what you can give a dog for pain.

How to use squeaky toys for training

Just when you thought you knew all the dog trainers’ training secrets, the squeaker toy comes along and proves you wrong. Whether it’s a squeaky rope or chew toy, it can be a sneaky way to reinforce your dog’s behaviors, Farricelli says. “Hide a squeaky toy behind your back, call your dog, and reinforce him for coming to you by praising and providing access to the toy as you squeak it and toss it for him to catch.” The squeaker’s sound can also divert your dog’s attention from something they shouldn’t be getting into or unwanted behavior like nipping.

But the most fun way to utilize a squeaker toy is to capture your dog’s attention when taking pictures. While your dog is in a solid sit/stay position, squeeze the toy to get his full attention. “I get the best pictures this way as they are sitting nicely composed while their ears are perked up, their eyes are bright, and they have a focused, alert expression,” says Farricelli. If she’s lucky enough, she gets the adorable head tilt, too!

The potential dangers of squeaky toys

What’s the danger in some good, old-fashioned, instinctual fun? Nothing…unless your pup ingests the squeaker and/or stuffing after he’s torn the toy to shreds. Dr. McCarthy says that some of his patients pass the material and squeaker when they poop, while other dogs end up with an intestinal blockage that requires surgery to remove them. That’s why it’s so important to keep an eye on your dog when he’s playing with toys, especially squeaky ones.

Equally important is training your dog early on to “drop it” or “leave it” on cue. But if he ignores this command and you can’t get the toy away from him, Farricelli has a suggestion: a high-value swap. Offer your dog something edible that he goes bonkers for, whether it’s a dog treat or a peanut-butter-stuffed Kong. “The goal is to make the dog feel that when we approach him to remove a toy, we have something far better to offer,” says Farricelli. “[That helps] prevent resource guarding and teaches the dog to voluntarily give up things rather than give us a hard time—like running away with it, baring teeth, or trying to bite.”

How to choose safe squeaky toys

There’s no shortage of squeaky toys to choose from. Some toys are cuter and look more fun to play with than others, but what really matters is durability and safety. Plush toys filled with stuffing are the least durable and most likely to be destroyed quickly, and you’ll have to replace them more often. “I recommend rubber or plastic toys, preferably with a raised, ridged, or spiked surface, as this helps clean your dog’s teeth and gums while chewing,” Dr. McCarthy says. “And look for BPA-free, food-grade material, which means it is antibacterial and holds up better over time to dog slobber and repetitive cleaning.” Make a habit of routinely checking your dog’s toys for damage—and your backyard for these shockingly common dog dangers.

When you need a break from squeaky toys

As pet parents, we might not appreciate the seemingly endless loop of the squeaker, and we might hope for what Dr. McCarthy calls a “squeakectomy.” Luckily, there’s a way your dog can still go nuts over a squeaky toy without having to sacrifice your sanity. “Dogs can hear ultra-high-pitched noises that we can’t,” Dr. McCarthy explains. “There are ‘silent’ squeaky toys that operate in these human-sparing frequencies that have all the benefits without the noise!” While you’re shopping for a silent squeaky, put a few of these goodies your dog wants from Petco on the list, too.

Why Do Dogs Lean on You?

What Do Dogs Think About?