Why Gwendolyn and Brent May Decide This Election

It’s old hat that support for Obama and Romney breaks strongly along lines of gender, race, income (even marital status) — 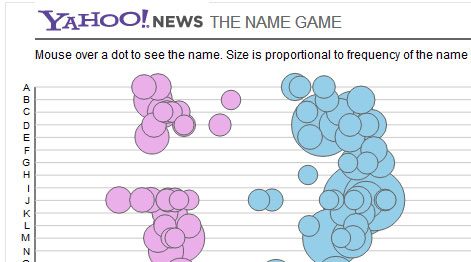 It’s old hat that support for Obama and Romney breaks strongly along lines of gender, race, income (even marital status) — but did you know that a person’s first name could also predict which candidate they’re more likely to get behind?

That’s what Yahoo!’s Chris Wilson exposes in this totally addictive interactive graphic. Using publicly available donor data (the parties are required to report anyone whose cumulative contributions exceed $200), Wilson figured out the percentage of donors with a specific name who gave to each side.

The most Democratic-leaning name? Gwendolyn. And if the GOP needs money, they should seek out “Brent,” most likely to be a Romney partisan. While the gender split is distinct — with all female names skewing to the left and most male names to the right — there are gender outliers. Willie, for example, handed a whopping 93% of his contributions to Obama, while Patsy, what Wilson identifies as the most Republican-siding distinctly female name, gave 42% to Romney’s team.

Curious how your name falls? Type it into the tool to find out.

This Is What the First Amendment Really Means