Why Not Voting Is Not an Option in the 2020 Election

Who Americans vote in and how many Americans exercise the privilege of voting will affect our well-being for a long while to come.

The United States is at a crucial turning point in its 244-year history. There are deep, visceral, ideological divisions within America exacerbated by 2020’s unprecedented confluence of crises: pandemic, economic, environmental, and racial. This kettle of tensions threatens to boil over by one last challenge—our quadrennial national election. Because there are so many fires to put out across the cultural landscape—literally and figuratively—it behooves Americans to educate themselves and exercise their most crucial function as citizens of a representative government—and vote. With so much at stake this November, not voting in the coming election is not an option; and below are the reasons why—and here’s everything you need to get out and vote.

When the Voting Rights Act of 1965 was gutted by the Supreme Court in 2013, it proved to be a bellwether of what was to come, just as the late, great Justice Ruth Bader Ginsburg and other critics of the decision warned. States across the Deep South and Southwest quickly moved to disenfranchise voters and make voting access more difficult to obtain and maintain. In so doing, they upended years of Civil Rights Era gains which Black activists risked life-and-limb to attain. If the mid-pandemic mid-pandemic primary election process is any indication of what’s to come in November, it’s imperative that every eligible citizen takes full advantage of the privilege of their vote in the general election.

Despite the controversies befalling the election process, there are still plenty of citizens who deeply appreciate the gift of being able to participate in it. Cathryn McGill, of the New Mexico Black History Organizing Committee, is “grateful that my ancestors literally put their bodies in harm’s way to ensure that I could have the same rights as every other American. The failures of our system notwithstanding, I wouldn’t trade my right to vote for a mansion on a hill.”

The vote is what enables our nation to govern adequately and fairly. Despite the Supreme Court’s 2013 decision, voting helps us protect the unprotected, empower the disenfranchised, and support those vulnerable to political whims. A new generation of voters represents a considerable percentage of the national turnout, and they may opt for great change, ensuring that the politicians they vote in are kept accountable.

Derek M. Chavez, an IATSE TV and film union representative for diversity and inclusion, states, “For too long, complacency in the voter base on both sides has allowed [in] officials who don’t necessarily represent what the people elected. Lack of voter engagement creates room for small, highly-motivated groups to create the rules, which has resulted in us being bound by a system created by the few in opposition to the unflexed will of the many. The most effective way to steer our government to properly represent constituents is at the ballot box.” In short, we have to stay vigilant to safeguard our democracy and the institutional checks which keep it working the way it’s supposed to work. Learn 15 interesting facts and figures about the Constitution.

A representative government needs an active voting body to participate in the country’s best interests. If the people divest themselves from the process, then more extreme political scenarios will play out. The lessons from past mistakes and contemporary challenges will be unlearned if the growing, younger voting blocs in America choose not to participate. And some see this disturbing trend already unfurling.

Amanda Parker, a race scholar and educator in New Mexico, notes, “It offends [some younger citizens] to ‘vote someone out’ instead of ‘voting someone in.’ This really bothers me because women and people of color who struggled to get the right to vote were hardly voting for candidates that represented their interests at the time, but they were focused on the bigger system and the idea that change would not come about without their vote for candidates that they perceived as maybe a little better.” Our voting process is imperfect but cannot be self-corrected; it takes the will of the people and their active engagement to fix what needs mending and to maintain a sense of hope in times as stressful as these. Our candidates, obviously, are imperfect, as well, which seems to be a sticking point with skeptics of the process. 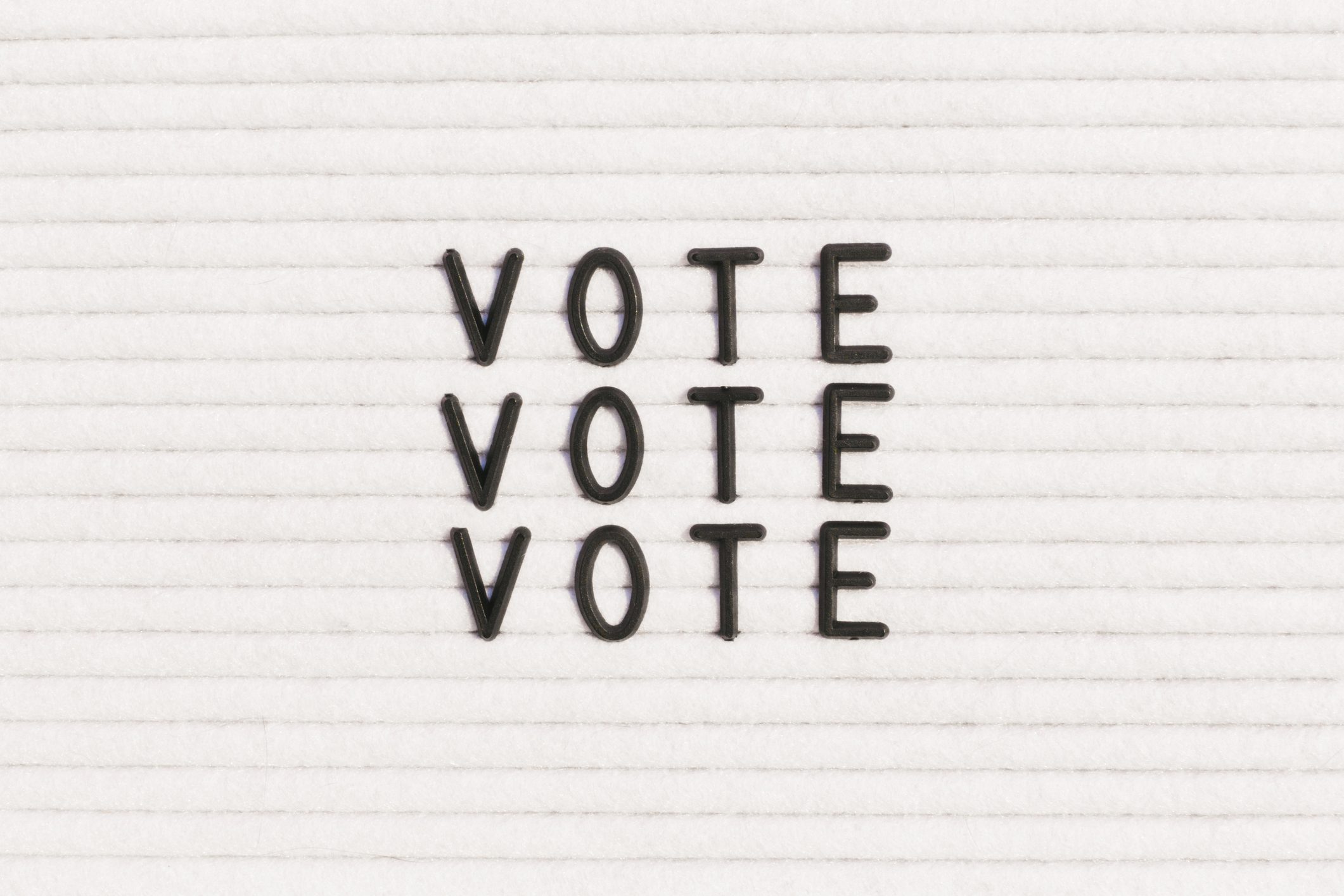 If a sort of absolutism plays out in this crucial election and keeps whole swaths of young people from voting, we’ll end up with a government that doesn’t adequately represent the larger will of the country. Citizens’ participation is necessary and not just at the national level. The down-ticket races—contests at the state and local levels—are crucial and might better help skeptical voters cast their ballot. This is where we, as citizens, have an even more direct line to political action and involvement.

Gordon Monaghan, a New Mexico history teacher and father of four, is concerned about the racist origins and present-day implications of the Electoral College on the national stage, but he notes, “My one vote does matter. At the local level, which is where the decisions that impact my life directly are made, very few people actually vote. Often these local candidates end up being statewide candidates, and sometimes even national candidates. By voting in every election, I can help influence the choices I will have in elections down the road. By voting in every election, I can vote for candidates that support my values and will work to translate my values into policy. Change will happen or not happen, but there is a much better possibility of the kind of change I believe in, if I vote.”

Not voting clearly impacts non-voters as much as voters, as it fails to shape the very processes hitting close to home: law enforcement, first responders, mental healthcare, schooling policies, local infrastructure, and local tax laws affecting entrepreneurs and their businesses. If frustrated would-be voters fail to advocate on their own behalf—by refusing to address the common welfare in their own literal front yard—they are excising themselves from the very sociopolitical conversations they seem to want to have. They fail to invest in their local sphere of influence by removing themselves from the process. As Chavez says, “Sitting on the sidelines and deciding not to vote guarantees that you will continue to be misrepresented by your leaders.”

Lives depend on it

With overlapping crises feeling like an existential riptide, American lives lie in the balance of this coming election. It’s not an overstatement. Whoever takes the next seats of power—nationwide, statewide, and locally—will determine the path of best dealing with vaccinating against the coronavirus pandemic, rebuilding the economy, addressing the persistence of racial injustice, and acknowledging the climate crisis. It’s no small feat for any politician to handle. Unfortunately, there are clear indications that voter suppression is happening, and that it disproportionately affects Americans of color.

In response to questions like Bott’s, politicians’ tone can be charged, desperate, and defensive come January 20, 2021; or it can be compassionate, even-handed, and determined. It takes more than executive orders, legislation, and judicial precedent to improve America’s body politic; it takes the willingness to evolve, heal, and heed the varied voices of the voting population, especially during our shared ongoing crises.

The United States has suffered mightily during the COVID-19 pandemic, losing more than 200,000 American lives. Combined with the resulting economic recession, West Coast wildfires, and civic unrest over racial injustice, 2020 has felt overwhelming. This coming election is perhaps the most important American election in the 60 years since the Voting Rights Act enfranchised Black voters, but the issues we’re facing now are not exclusive to the Black community. These are American issues. Quite literally, who Americans vote in and how many Americans take advantage of the privilege of voting will affect our well-being and livelihood for a long while to come.

As Bott concludes, “We have the future of our Supreme Court in mind. We have the future of the Senate in mind. We are voting for justice. We are voting for the future of our children and grandchildren and what kind of environment they will be able to thrive in. [Our politics] cannot be left to those who long for what America used to be. As Millennials, we instead tend to focus on what is happening in our society right now and what it means for our future. This is a pivotal time for our nation and the rest of the world as we influence it. Not voting is not an option.” Next, find out the answers to the 15 political questions you’re too embarrassed to ask.

Why Does the Supreme Court Have Nine Members?

12 Facts About the White House You Missed in History Class

Sean Cardinalli
Sean Cardinalli is a screenwriter, activist, coach, and father. He’s a writer “for all seasons,” able to carry on confidently about social justice, pop culture, and spiritual leanings. He speaks truth to power, and still has tremendous faith in humankind’s capacity to grow in compassion.

30 of These $7 Makeup Sponges Are Sold Every Minute
15 Podcasts from LGBTQ+ Creators to Add to Your List
Companies Are Trying to Cash In on Juneteenth. Here’s Why That’s a Problem