A year from now, we’ll all be caught up in the hype and craziness surrounding the 50th anniversary of the 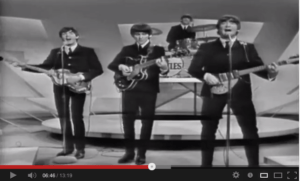 A year from now, we’ll all be caught up in the hype and craziness surrounding the 50th anniversary of the Beatles’ arrival in the U.S. in February 1964, highlighted by their legendary appearances on the Ed Sullivan Show. But why wait? Over at Slate, they’ve already started a cool Beatles project that tracks the Mop Tops’ career in “real time.”  Every week, the site’s Brow Beat blog posts an item about the Beatles’ progress, starting in November 1962, when the band recorded “Please Please Me,” which became their first No. 1 single.

It’s a great fun to zoom in on 1963, when the group went from opening act status to international superstars in a matter of months. For fans who love the kind of detail the Slate series provides, I recommend my all-time favorite Beatles book, The Complete Beatles Recording Sessions, by Mark Lewisohn. The book documents every Beatles recording session at Abbey Road studios, from their first in 1962 to their last in 1970. I love the book because it’s all about the music and how they made it.

If you add Bob Spitz’s encyclopedic biography The Beatles and Sean Egan’s The Mammoth Book of the Beatles, which includes British newspaper articles, interviews and reviews from the early years (among them, Lennon’s infamous “Beatles bigger than Jesus” interview), you’ll have a near-perfect, three-volume Beatles library. I wonder if these folks have read them all.