In that historic address Churchill described the Soviet grip on Eastern Europe: “From Stettin in the Baltic to Trieste in the Adriatic, an iron curtain has descended across the continent.”

In the early 1960s the college decided to honor the great British leader by reconstructing on its grounds a London landmark destroyed in World War II. The structure was the church of St. Mary the Virgin, Aldermanbury, a 12th-century London church demolished by the great fire of London in 1666 and rebuilt by Christopher Wren in 1677. The church was knocked to the ground by German bombs in 1940.

Dismantling began in 1965. Seven thousand stones weighing a total of 700 tons were cleaned, numbered, and shipped to Fulton, with new stones hand cut as necessary. Wood carvings, plasterwork, windows, and brass chandeliers were all re-created from Wren’s designs. A new organ was built in London, five new bronze bells were cast in Holland, windows were copied by a glass company in West Virginia, and a London wood carver matched the original pulpit.

Dedicated in 1969, the white church radiates an elegant simplicity. The interior is light and spacious, the decor rich but unobtrusive. A library and a museum in the undercroft relate the life and long public service of the prime minister. 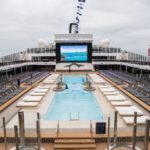 What Happens to Old Cruise Ships?