The Most Surprising Story to Go Viral This Week: The Atlantic magazine’s “Why Women Still Can’t Have It All,” by 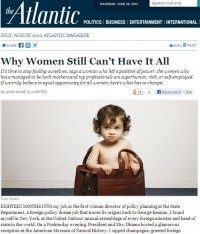 The Most Surprising Story to Go Viral This Week: The Atlantic magazine’s “Why Women Still Can’t Have It All,” by former State Department official Anne-Marie Slaughter. Since the article went up on theatlantic.com a week ago, more than 775,000 people have read it, making it the most popular magazine story online for a five-day period, according to Omniture, an online research firm.

The story also has grabbed more than 163,000 Facebook likes to date and is now, shockingly, the most-liked magazine story ever. (Only one article blocks it from the top spot for most-read magazine stories of all time: How Your Cat is Making You Crazy. Of course!) It even made the front page of the New York Times.

From Slaughter’s point of view, having it all is a promise unfulfilled, a feminist myth that became a mandate under which millions of young women labor today trying to simultaneously manage a career and a family. These young women, according to Slaughter, believe they’re failing, and failing their gender, if they can’t hack doing both at the same time.

But when I hear the words “the woman who has it all,” I think of a romance novel’s cartoon heroine, or a sales pitch (“For the woman who has it all, these over-the-top sparklers are hot for the holidays!”). The phrase dates back decades, though not to the faceless feminists to whom Slaughter attributes it. It was the late Cosmopolitan editor Helen Gurley Brown who used the term to describe hard-charging career women who were also excellent sex kittens, gourmet cooks, and impeccable laundresses with perfect manicures—such a potent notion that she chose it as the title for her book back in 1982.

Not the same model most feminists fought for. Yet Slaughter feels let down and misled.

Most women I know grappling with work/family balance acknowledge that it’s monumentally difficult at times. But they’re also pretty clear-eyed about where the problems lie: for instance, in corporate policies that haven’t kept pace with real life; antiquated attitudes about both mothers and fathers; and a bleeding economy that doesn’t really allow for one half of a couple to stay home with the kids.

I know I’ve been lucky. I’m not a single mother, and I make more than the minimum wage. Still, I haven’t had a choice to stay home. I supported two children on my own for years. And now I share in the support of four. Sometimes having a job outside the home and a family is really difficult. Sometimes it’s also incredibly fun, and exciting, and fulfilling. But I never think I have it all; I don’t know anyone who does, or expects to, unless they themselves are still in diapers.

Forwarded from one woman to another to another, “Why Women Still Can’t Have It All” now has a life of its own. Or I should say, the topic has hit a nerve close to the surface. Ask any woman—it doesn’t matter whether shes read the piece or not—and she’ll have strong, complicated feelings about work/family balance. I recommend you do read it, though, and be sure to read the comments, too; many contain real and heartfelt stories, (some pragmatic, some ticked off) from women who work outside the home and from women who do not. The best thing about trying to have it all is having the conversation.