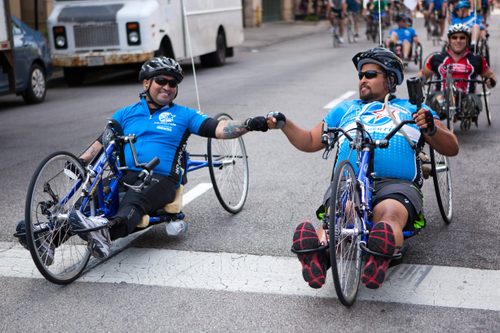 Toby Montoya had made a promise to his best friend, Sgt. Kenneth Rahm of the Illinois National Guard, that if Rahm ever deployed, Montoya would go with him. So when Rahm’s unit was called up, Montoya put in a transfer from the New Mexico National Guard and the two men were deployed to Afghanistan together.

In 2009, Montoya’s vehicle was hit by a roadside bomb. As a result of the explosion, Montoya is wheelchair bound, suffers from a traumatic brain injury and a degenerative disk disease, and has lost about 30 percent of his peripheral vision in both eyes.

This year, Montoya reunited with the members of his unit for the first time since leaving Afghanistan to participate in Soldier Ride, a cycling event organized by the nonprofit Wounded Warrior Project to help veterans restore their physical and emotional well-being. Soldier Ride is being held in 12 cities in 2012: Miami & Key West, Tampa, Jacksonville, Washington, DC, Chicago, New York, Seattle, North Fork, Phoenix, Nashville, San Antonio, and Landstuhl, Germany.

“I officially came home,” said Montoya. “We’ve never not finished anything together. I’m not worried about finishing today. This is a brotherhood.”

What Is Juneteenth and Why Do We Celebrate It?
After a Woman Rescued an Injured Swan, Strangers Helped Her Get the Bird Across the City to a Rehab Center
This National Guardsman Still Found Time to Teach His Students After Being Called for Duty