There’s an Eighth Continent Called Zealandia You Never Knew About

The world's "lost continent" is 94 percent underwater. Here's how to see it. 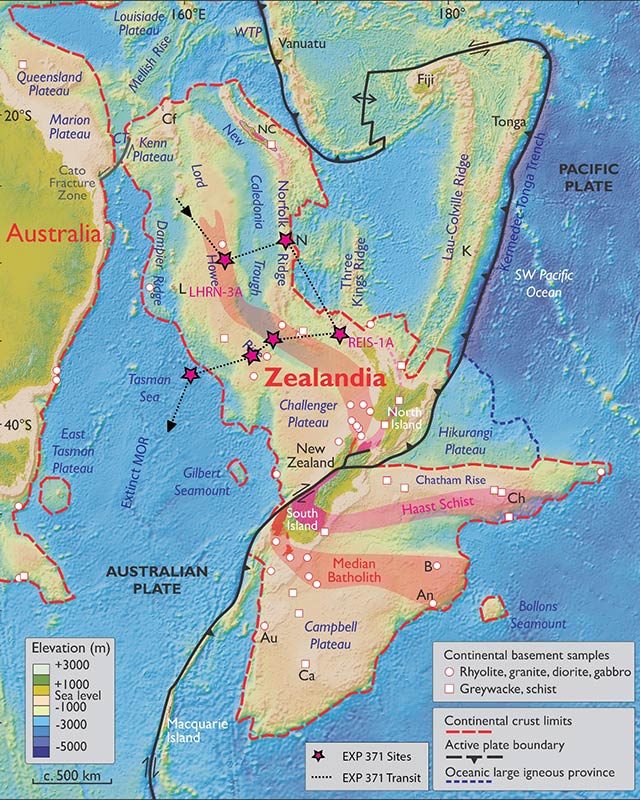 Courtesy International Ocean Discovery ProgramWe hope you’ve finally made your peace with Pluto being downgraded from a planet to an ice dwarf, because we have some more jarring news for you: It seems your teachers may have been wrong about the number of continents on Earth, too.

Earlier this year, scientists published a report in the journal of the Geological Society of America detailing an eighth continent called Zealandia, roughly the size of India and almost completely submerged under the Pacific Ocean east of Australia. Encompassing all of New Zealand as well as several nearby islands, Zealandia likely spent the best of its above-water days as part of the supercontinent Gondwana before fragmenting off of Australia and Antarctica some 80 million years ago. This lost, underwater continent is just beginning to reveal its secrets, making for one of the most promising scientific discoveries of 2017.

While researchers have been aware of the 1.9 million-square-mile mass for two decades, Zealandia has only recently become the object of serious study since the Geological Society paper argued that it fits all the criteria for a proper continent, including a continental crust that’s distinctly separate from the seabed in terms of elevation, thickness, and geology. A team of 32 scientists from 12 countries just completed their first visit to six dig sites around Zealandia, where they drilled up more than 8,000 feet of sediment cores that will help explain the lost continent’s 80-million-year history.

Because there is no official body that formally recognizes continents, whether or not Zealandia ends up in future geography textbooks will come down to its acceptance by the scientific community at large, possibly with a little help from travelers like you. Want to give some cred to the new eighth continent? It’s 94 percent underwater, but you can still set foot on it by booking passage to New Zealand, New Caledonia (an archipelago that technically belongs to France), and Australia’s Norfolk and Lord Howe islands. Remember, northern hemisphere winter is southern hemisphere summer, so book with haste (last-minute booking is one of the very worst air travel mistakes), pack a swimsuit and a snorkel, and be the first of your friends to touch the lost eighth continent.

7 Secrets to Avoid Flying on a Crowded Plane