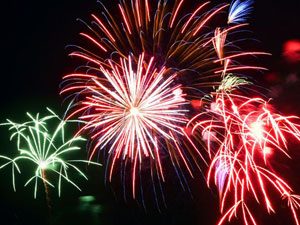 © Jupiterimages/Comstock/Thinkstock
In 2011, residents of more than 50% of the cities, towns and villages in the U.S. cast their votes in the inaugural Reader’s Digest We Hear You America campaign. The top 20 vote-getting towns received grants that allowed them to kick off (or complete) projects to make their communities even better places to live. This is one of those towns.

If you happened to be in Jacksonville in early July, you would have experienced a celebration that hadn’t happened in years. Over four days around Independence Day, townspeople flocked to Nickles Park for carnival rides, eating contests, charity runs and food vendors, culminating with a massive fireworks display over the lake.

The revival of this Fourth of July tradition was possible because of the grant the town received from the We Hear You America campaign. “Without the money, [this event] wouldn’t have happened,” said mayor Andy Ezard. “The town actually collected enough money from vendors to do it again next year. We hope it will be sustained for years and forever.”

The campaign also was a big boost to community spirit. It was the “talk of the town for months,” explained Ezard, as people worked to round up votes. The town had been going through tough economic times, but Jacksonville continued to push forward. “We’re a giving community; when things aren’t going right, people just step up,” said Ezard. A local water disaster in June kept the town of Jacksonville with no water for weeks, so “this July celebration got everyone’s mind off the problem. It was pretty neat to watch it all happen.”