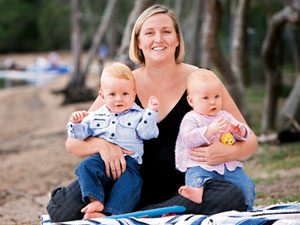 Pip BlackwoodOgg with twins Jamie and Emily, now nine months old and in fine health.
Kate Ogg, 29, was anxious as she waited in her Brisbane obstetrician’s office. Her twins, conceived via in vitro fertilization, weren’t due for another 14 weeks, but she’d been feeling painful contractions. After a hurried exam, her obstetrician gave her the news: She had to go to the hospital immediately.

Ogg lay quietly in a hospital bed in hopes of stopping her labor. It didn’t work: After a week, her contractions started to intensify again. There was no holding these babies back, the doctors told her. Accompanied by her husband, David, she was wheeled into the delivery room, where a team of 14 doctors, nurses, midwives, and neonatologists waited for her — along with two resuscitation carts.

As her first baby, a little boy, was born, Ogg caught a glimpse of a floppy, white body. Was that what a preemie should look like? She had no idea. As the team rushed to insert a tube into his lungs, Ogg delivered her second baby, whom they would name Emily. The little girl let out a cry, and for the first time, Ogg realized something might be wrong with the silent boy they’d planned to call Jamie.

The staff worked frantically on Jamie, but he never drew a breath. Finally, one of the doctors turned to Ogg. “We’ve lost him.”

As they handed Kate her baby, she noticed him gasp as if trying to breathe. “It’s just a brain stem reflex,” the doctor told her before leaving the couple to mourn in private. Kate gently unwrapped the blanket that surrounded Jamie and placed his fragile body on the warm skin of her chest. She wanted to get to know him. His future had been snatched from her, and she ached to get him back. For a while, she sobbed. Suddenly, Ogg thought she felt Jamie startle. She looked down and saw his chest move.

“I think he might actually make it,” she said excitedly to David. Again they were told it was a reflex. Then the newborn opened his eyes and seemed to grab for his father’s finger. David hurried to find a doctor, who explained that they weren’t seeing what they thought they were. “But look!” said Ogg, who had moistened her finger with colostrum from her breast. “He’s licking my finger.”

Quickly, the doctor listened to the baby’s chest. By now, Jamie’s lungs were inflated, he was breathing unaided, and he had regained full color. The medical team rushed Jamie to intensive care.

Ogg had stumbled onto a practice encouraged in many maternity hospitals around the world. Placing newborn babies on their mother’s skin, especially if they are premature, is called kangaroo mother care. Just like a kangaroo pouch provides a nurturing environment for a just-born joey, it’s thought that a mother’s chest provides the closest approximation to the environment of the womb. It helps babies’ chance of survival.

Emily and Jamie remained in intensive care for weeks. “Whenever we held the twins, they were happy,” Ogg says. “They would stop frowning.”

After their dramatic beginnings, the twins recovered quickly. And, in a life of miracles, the Oggs are expecting another: After many years of failing to conceive naturally, Ogg found out she is expecting her third child. She can’t wait for the first cuddle.

After a Skewer Impaled This Young Boy in the Face, Doctors Didn’t Know How He Was Still Alive