For all that I love a good novel, sometimes there’s nothing more engaging than a brilliantly rendered life story.  I’m 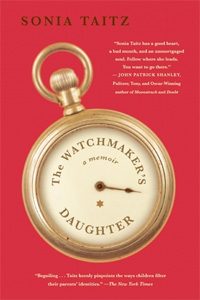 For all that I love a good novel, sometimes there’s nothing more engaging than a brilliantly rendered life story.  I’m not talking about celebrity memoirs (though those can be delightful), or about those books intent on expressing grievances with awful exes, parents, you-name-it.  I’m talking about books that thoughtfully illuminate a life and a community—the author’s and, with luck, our own.

Here are three worth reading.

The daughter of Holocaust survivors, Taitz writes beautifully about religious roots, generational culture clashes, and a family’s abiding love. Her memoir (out next week and on Amazon and BN.com now) begins, irresistibly, like this: “You could say that my father was a watchmaker by trade, but that would be like saying that Nijinsky liked to dance. Fixing watches was not only his livelihood but his life. This skill saved him when he had been imprisoned at the death camp of Dachau, during the Second World War, and he continued to fix watches until the day he died.  Simon Taitz was nothing less than a restorer of time. And I was his daughter, born to continue his life work—restoration and repair.”

Ghost Dances: Proving Up on the Great Plains
by Josh Garrett-Davis (Little Brown)

The North Dakota native relates his own rich family history along with a history of the Plains themselves (his great-great grandparents were homesteaders in Nebraska), and his complicated relationship with that part of the country. The combination of memoir and history is riveting.

We Were the Kennedys: A Memoir from Mexico, Maine
by Monica Wood (Houghton Mifflin Harcourt)

This gorgeous, moving book invites us into the life of Wood’s working class Catholic family in a paper mill town Maine after the sudden death of her father. (Her mother took inspiration from Jackie Kennedy.)  It’s a beautiful exploration not only of family bonds but also of faith and resilience.