12 Common Phrases You Never Knew Were From the Bible

Reader's Digest Editors
From the book Amen To That! The Amazing Way The Bible Influences Our Everyday Language

No book in history has contributed more phrases to the English language than the King James Bible. Here are a few of the ways it has influenced everyday language. 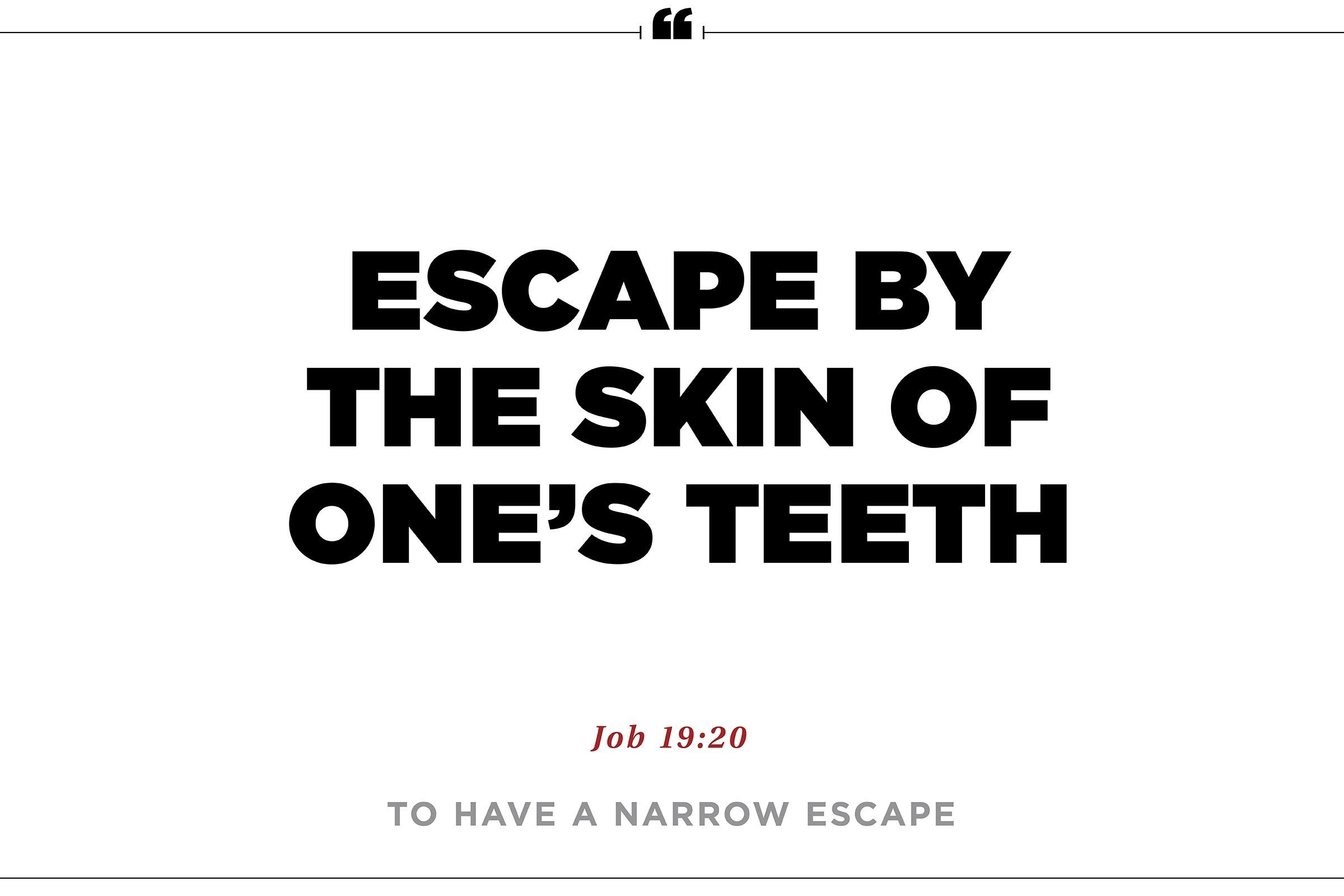 "By the skin of my teeth"

This is one of the many proverbs that owe their origin to the colorful language of the Book of Job. The tormented hero Job is complaining about his woes. He has become, he says, so emaciated that “my bone cleaveth to my skin and to my flesh, and I am escaped with the skin of my teeth.” The proverbial meaning is that he has missed death by a tiny margin—as narrow as the (non-existent) skin on a person’s teeth. But biblical scholars have argued endlessly about what the phrase originally signified. Some argue for a more literal interpretation: that Satan kept Job’s mouth—the skin of his gums, jaws, and lips—healthy in order to encourage him to blaspheme against God. More recently, the heavy metal band Megadeath put an interesting slant on the saying when they used it as the title for a track on their third album in 1992. Frontman Dave Mustaine explained to a live audience: “This is a song about how many times I tried to kill myself and just couldn’t get the job done.” 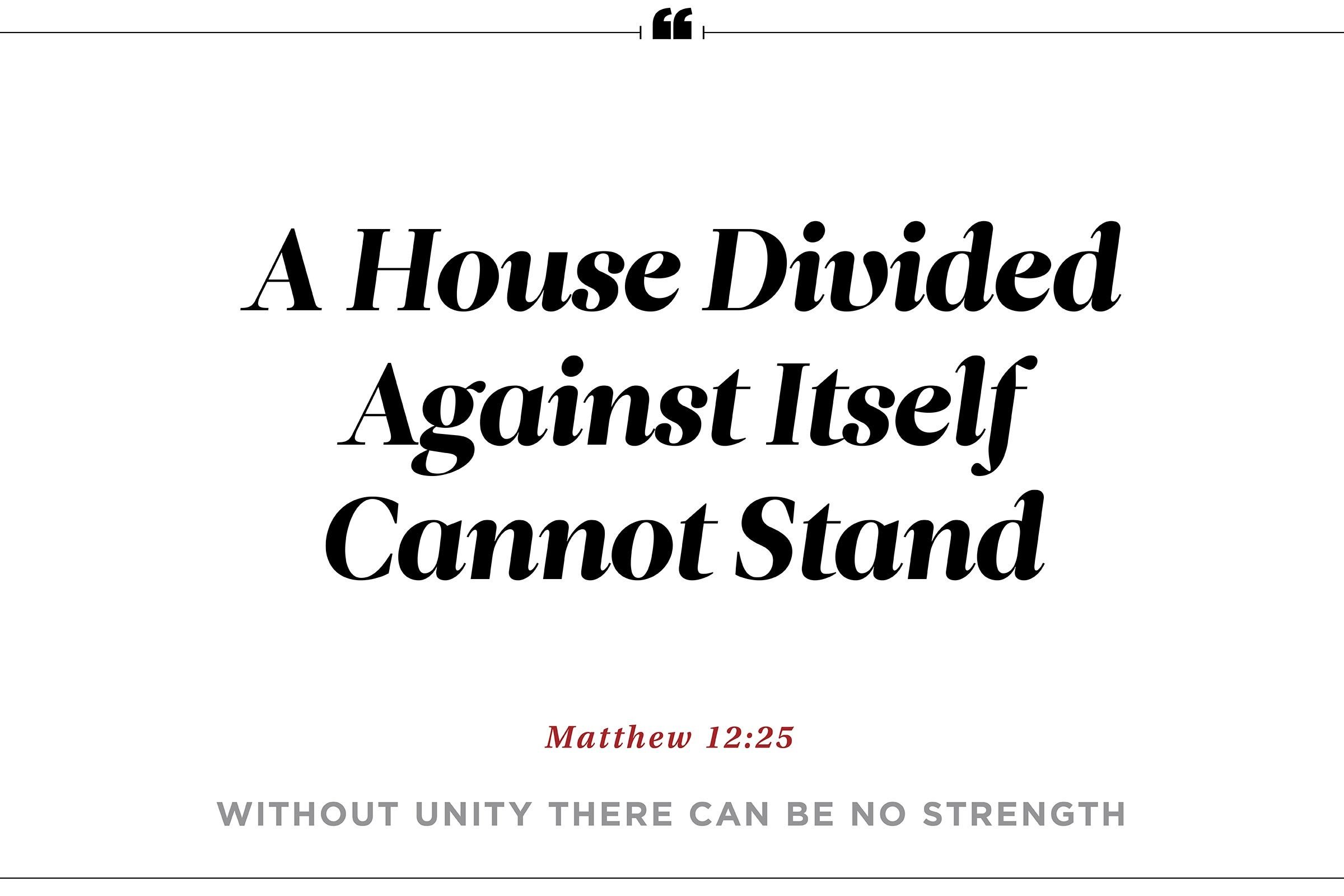 "A house divided against itself"

Without unity there can be no strength In Matthew’s Gospel, Jesus tells a crowd of impudent Pharisees, “Every kingdom divided against itself is brought to desolation; and every city or house divided against itself shall not stand.” However, the phrase didn’t enter the modern lexicon until it was memorably quoted by Abraham Lincoln in his famous nomination acceptance speech of 1858. Addressing the contentious issue of slavery in the United States, he told an audience of Republican politicians that “a house divided against itself cannot stand. I believe this government cannot endure, permanently half slave and half free.” His words were prophetic. Three years later, the U.S. government did indeed split, and the resulting civil war between slave and free states cost more than 600,000 lives. The phrase meanwhile, became famous, immortalized as the title of a 1913 movie, a 1935 novel, and, rather grandiosely, an episode of the hit TV series Dallas. Not exactly what Jesus had in mind. Check out these phrases that used to be insults but now people use them as compliments. 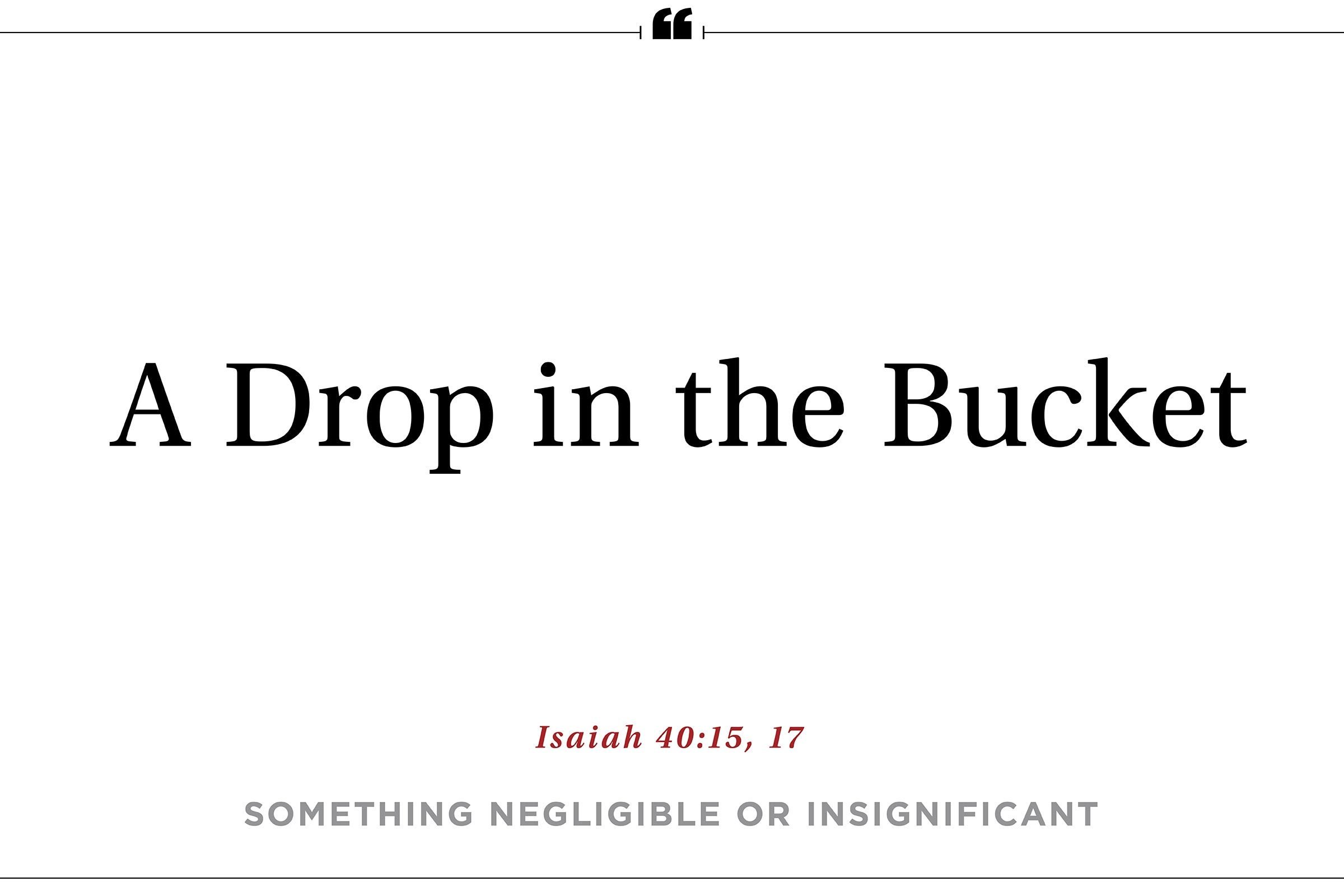 "A drop in the bucket"

Stuck between the mighty pharaohs on one side, and a succession of great Mesopotamian empires on the other, Israel was always destined to be a small fish in a big and dangerous pond. By the middle of the sixth century BC, the Jewish kingdoms had been conquered repeatedly, and a decent chunk of the population was living in painful exile in Babylon. Amid all this geopolitical gloom, the Book of Isaiah had some words of comfort. Compared to God, says the prophet, “the nations are as a drop of a bucket, and are counted as the small dust of the balance.” These days, in keeping with the modern enthusiasm for “super-sizing,” the “bucket” is often replaced with the “ocean.” Also in today's modern time, we should definitely bring them back these 10 beautiful words. 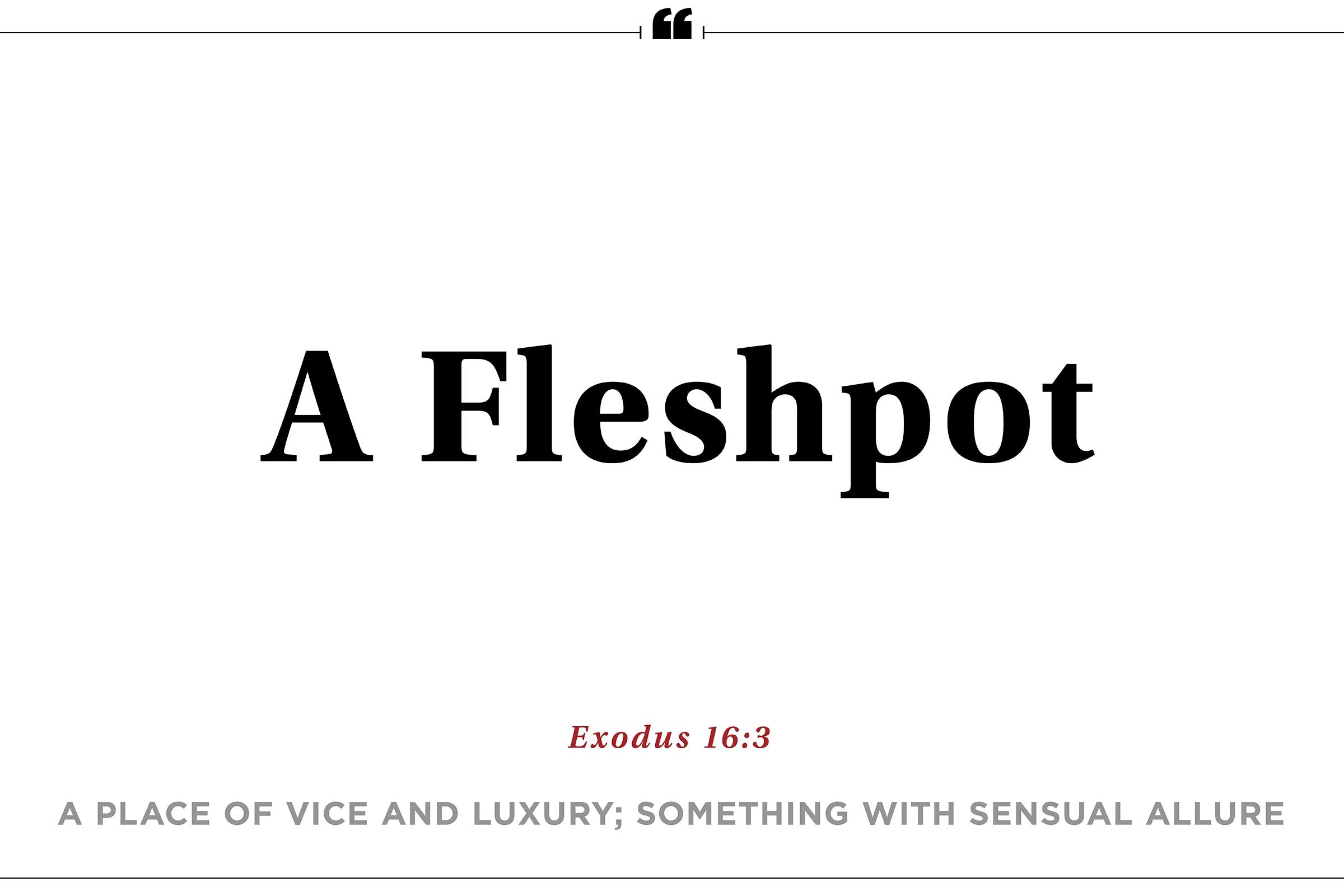 In the Book of Exodus, Moses leads the Hebrews out of Egypt to escape from the tyrannical pharaoh and find the Promised Land. They follow him eagerly enough at first, but it soon becomes clear that the journey will be far from straightforward. As geography students will remember, between Egypt and Israel lies the barren wasteland of the Sinai Desert. It isn’t long before Moses’ flock start complaining: “Would to God we had died by the hand of the Lord in the land of Egypt,” they moan, “when we sat by the flesh pots, and when we did eat bread to the full.” “Flesh pots,” in this passage, means exactly what it sounds like: pots in which you cook flesh. But the fleshpots of Egypt became a popular metaphor for any luxurious scene imagined with regret or disapproval. Gradually, the Egyptian reference dropped away—in 1710, Jonathan Swift writes of the “fleshpots of Cavan Street”— until fleshpot became an all-purpose word for anywhere that was particularly alluring. These days a “fleshpot” can be anything from a casino in Las Vegas to a London nightclub. Did you know that each state in the country has its own slang words? 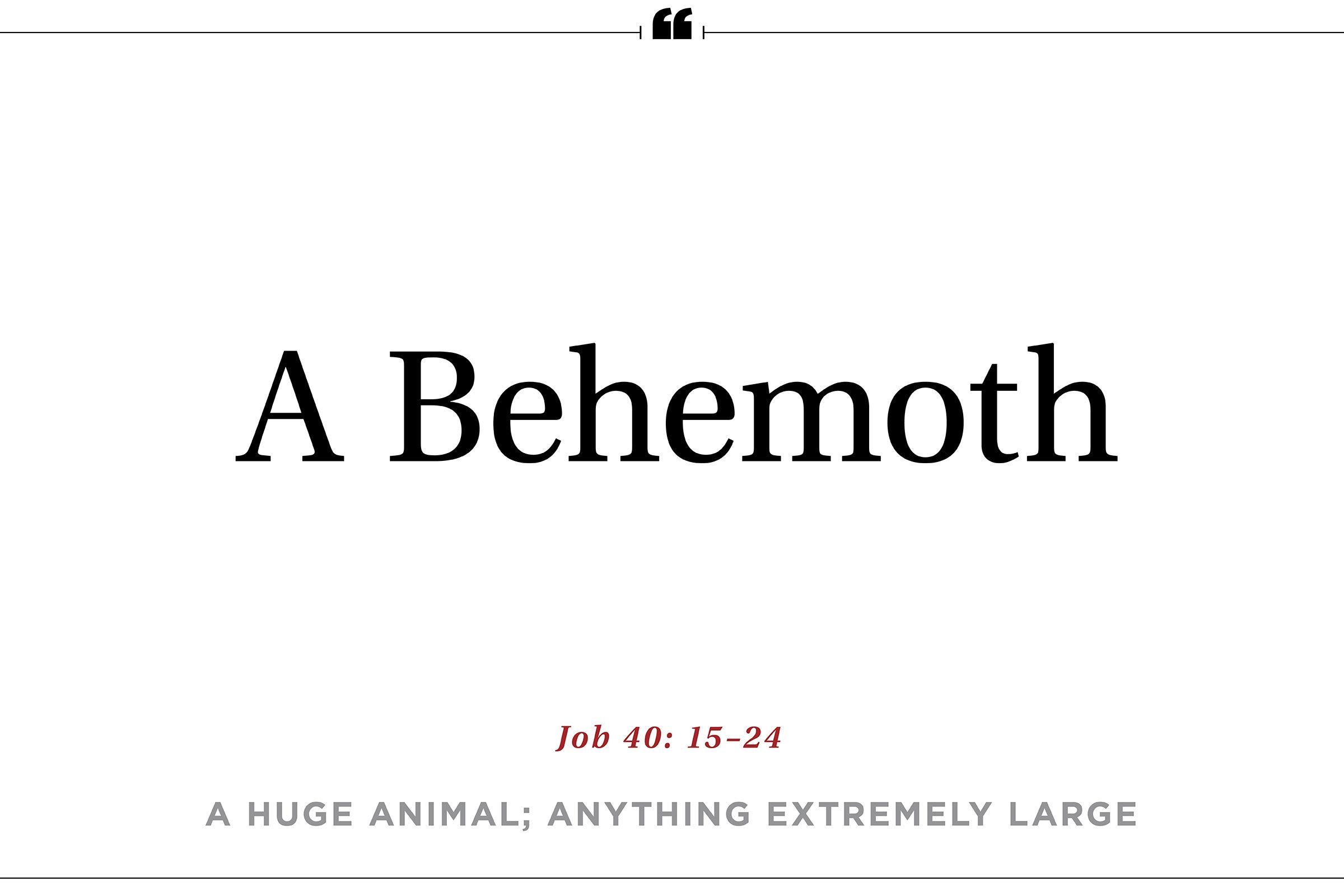 The behemoth is a mysterious animal mentioned in the Book of Job. With bones “like bars of iron” and a tail “like a cedar,” this mighty beast was said to be able to suck the whole River Jordan into its mouth. Biblical scholars have long debated whether the behemoth is a mythical creature or just an exaggerated description of an ordinary animal (the most popular candidate is a hippopotamus). This is what English words would look like without classical origins. Whatever the original “behemoth” may have been, the name has become a metaphor for anything that reaches spectacular size. This figurative use is first recorded in a pamphlet of 1593, written by Gabriel Harvey as part of his vicious literary feud with Thomas Nashe. Nashe, writes Harvey, is “a Behemoth of conceit,” but “a shrimp in wit, a periwinkle in art, a dandiprat in industry,” and “a dodkin in value.” 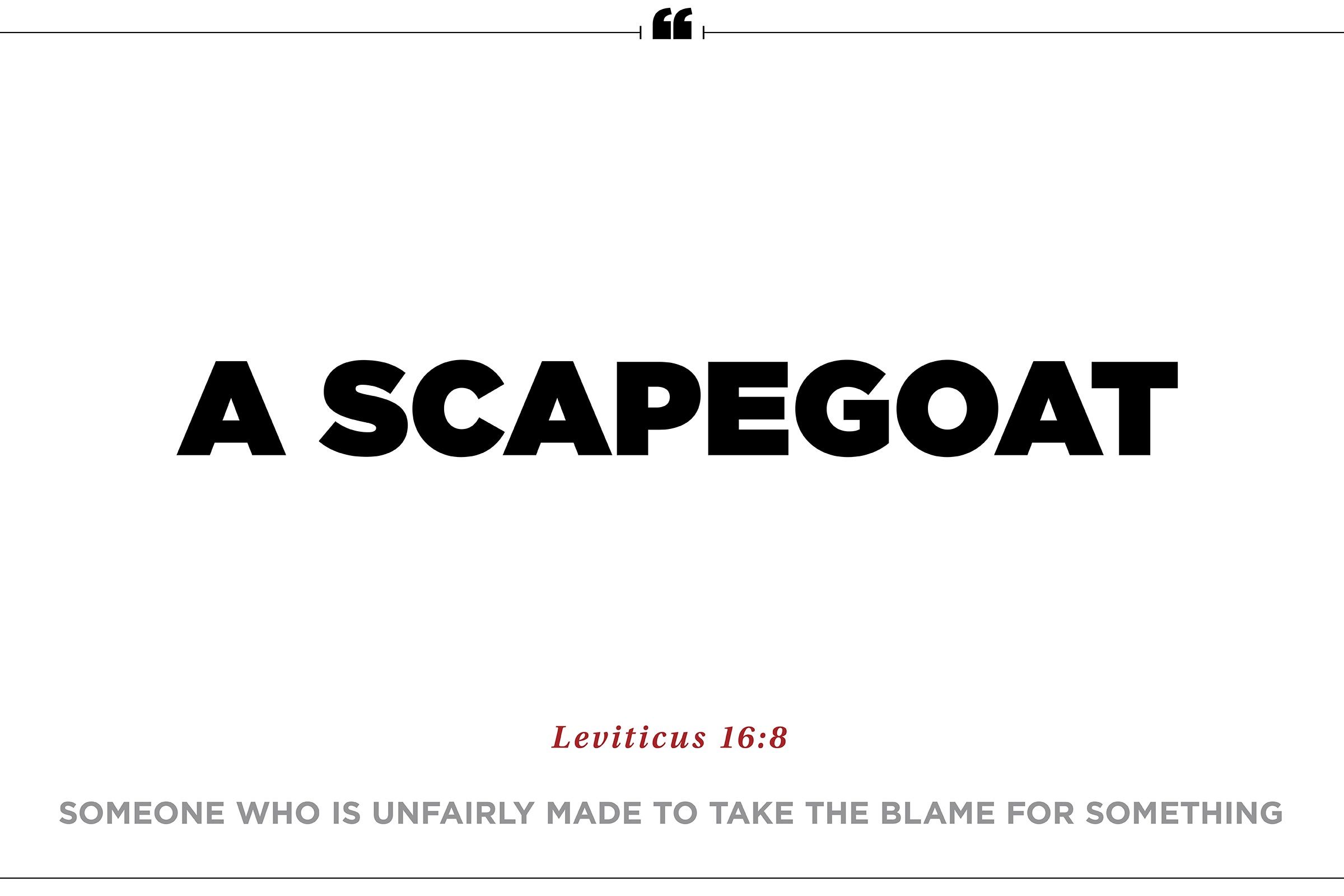 The Book of Leviticus describes the proper ceremonies to be observed on the Jewish Day of Atonement, when the land of Israel would be ritually cleansed of its sins. The procedure was that one goat would be offered to God as a sacrifice, while the other—the “scapegoat”—would be symbolically loaded with all the misdeeds of the nation before being driven into the wilderness. This ceremony was said to have been carried out each year since the Exodus from Egypt. It did, however, acquire one important modification after an unfortunate incident in which the scapegoat wandered out of the wilderness and merrily back towards Jerusalem. To prevent a repeat of this extremely bad omen, subsequent priests arranged that the scapegoat’s journey to the wilderness should start with a headlong plunge down a local cliff. After that, scapegoats became significantly less mobile. We bet you had no idea these 22 words and phrases originated in the military. 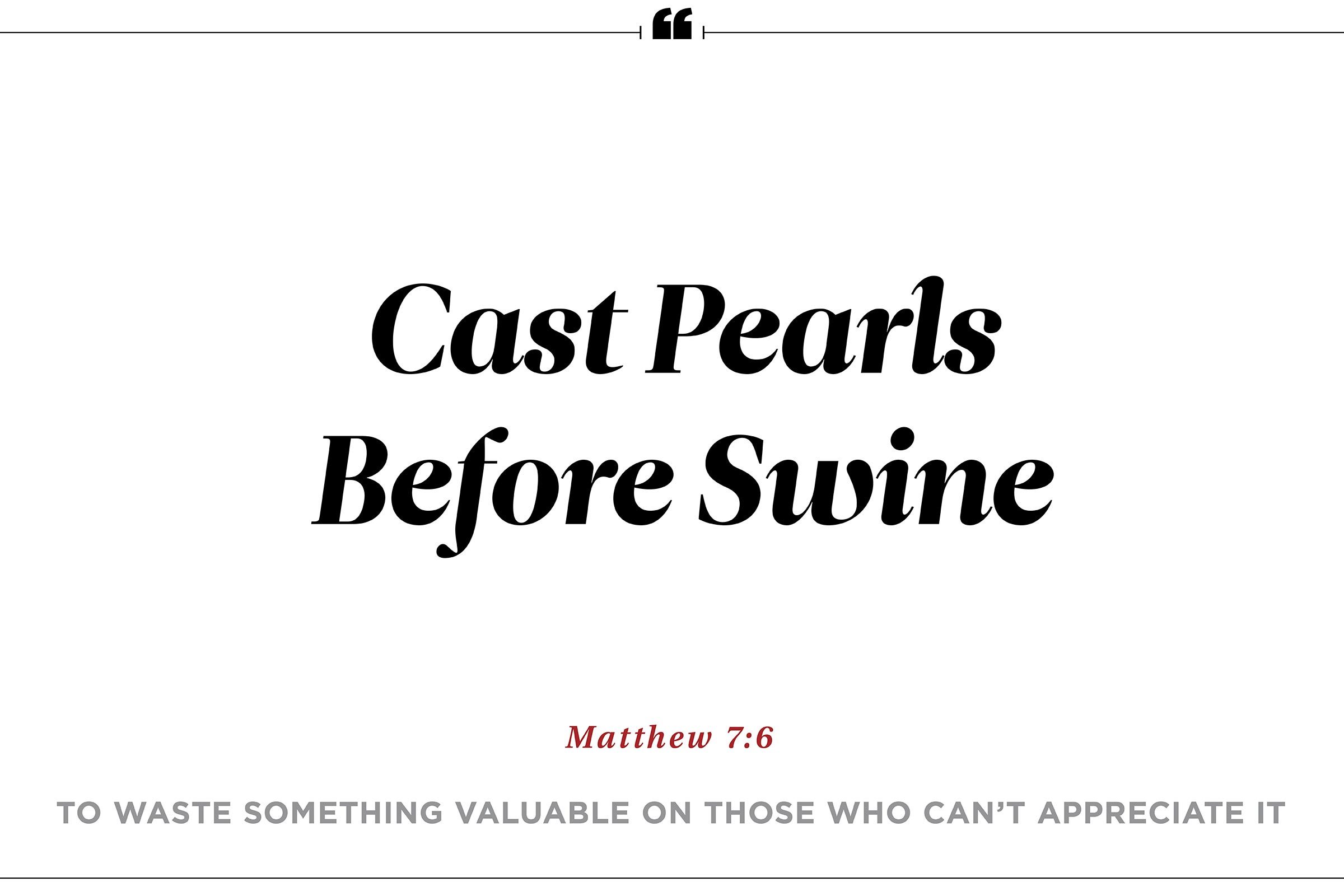 "To cast pearls before swine"

This famous phrase is a quote from Matthew’s Gospel: “Give not that which is holy unto the dogs,” writes the Evangelist, “neither cast ye your pearls before swine, lest they trample them under their feet, and turn again and rend you.” This dramatic image—which of course gains extra power from the fact that pigs are considered unclean animals by orthodox Jews—became a favorite in the Middle Ages, first mentioned in English by William Langland in Piers Plowman in the fourteenth century. Charles Dickens used the phrase in his 1848 novel Dombey and Son, to mean “doing a thankless thing.” But the most famous occurrence, which gives a twist to the ancient meaning, is in a story about Dorothy Parker, the great American humorist of the 1920s. “Age before beauty,” said a cheeky young woman while holding a door open for Parker to pass. Quick as a flash Parker replied: “Pearls before swine.” Here are 10 phrases you have always used that are actually trademarked. 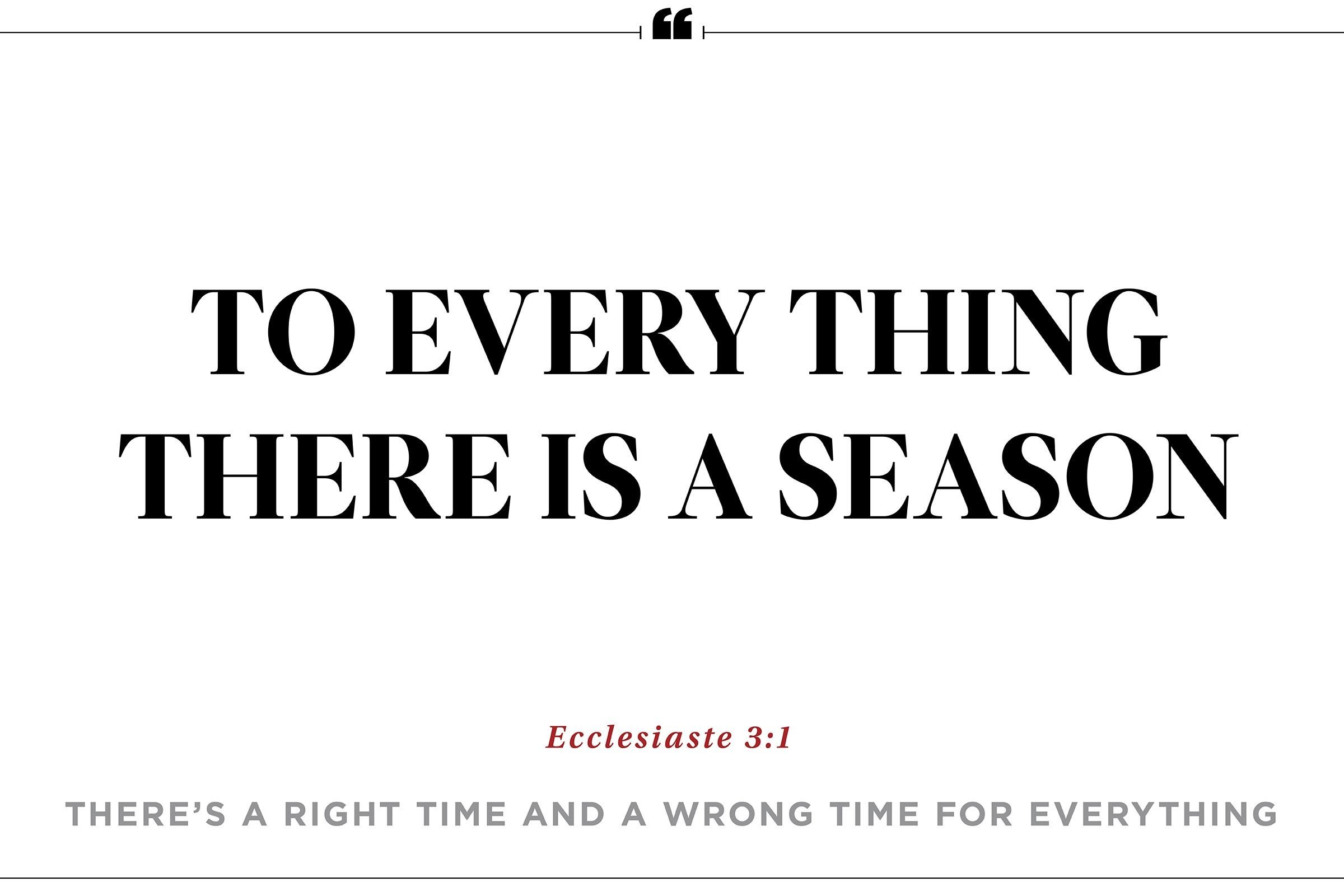 "To every thing a season"

This handy aphorism is another piece of wisdom from the Book of Ecclesiastes, in which the author offers his thoughts on life, death, and what it all means. “To every thing there is a season, and a time to every purpose under the heaven,” he writes. Warming to his theme, he continues, there is “a time to kill and a time to heal”; “a time to weep and a time to laugh”; there’s even “a time to cast away stones.” The full list has twenty-eight different times, and covers eight biblical verses. With its philosophical and reflective tone, it has become one of the most quoted and most popular passages in the Old Testament, a firm favorite for readings at funerals and other sad occasions. In 1959 the famous words even became a surprise hit when they were set to music by the folk musician Pete Seeger in a song called “Turn! Turn! Turn!” Covered by The Byrds in 1965, the track rocketed to number one on the U.S. singles chart—the iron-age lyrics are by far the oldest words ever to have become a chart-topping hit. These are some "modern" words that are actually much older than you'd think. 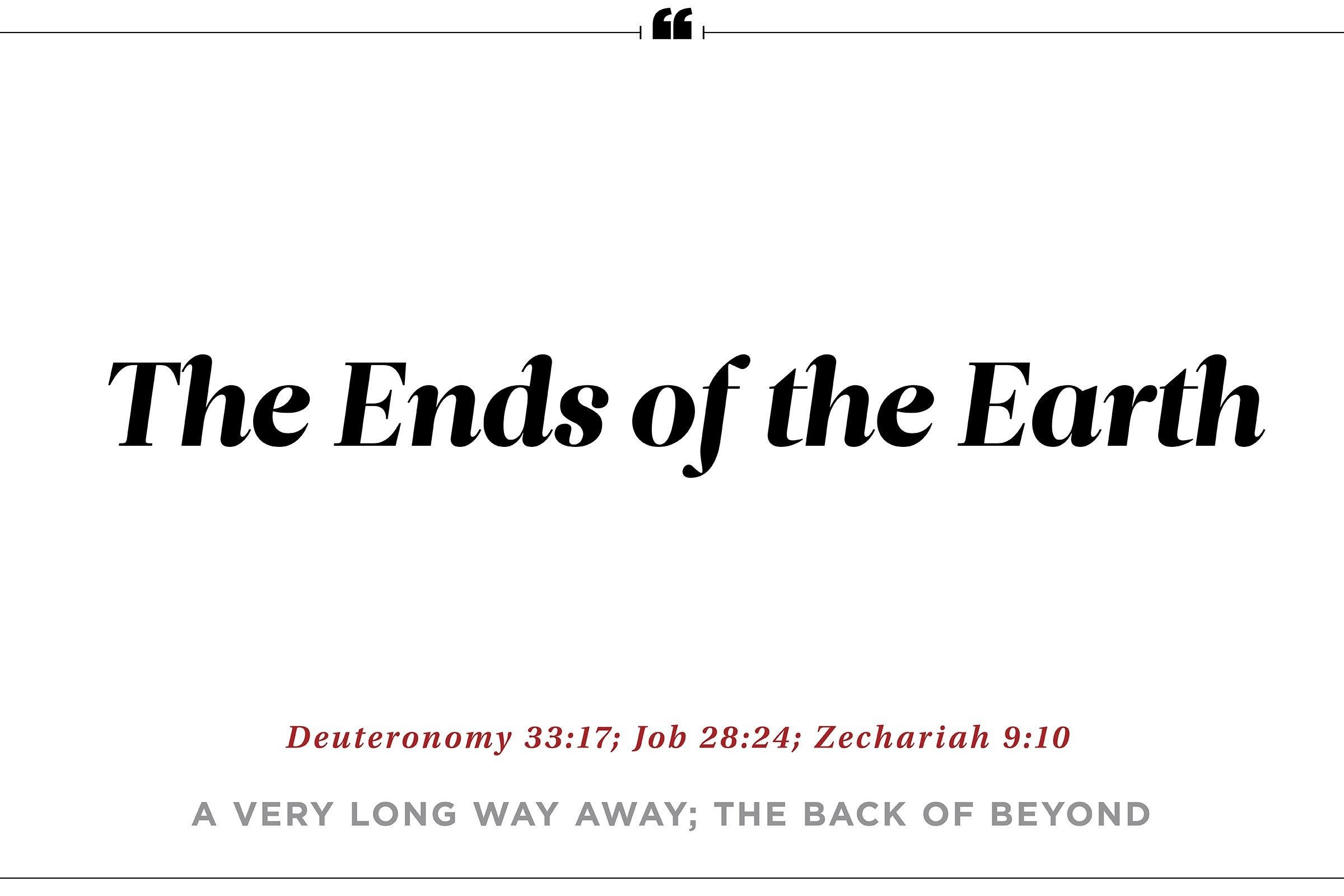 "The end of the earth"

Like most other ancient cultures, the ancient Israelites thought it obvious that since the earth was flat it must have limits. “The ends of the earth” therefore appears repeatedly in the Old Testament as a way to describe the furthest reaches of the then-known world. When, in the Book of Job, God is said to “direct his lightning to the ends of the earth,” it’s just a poetic way of saying that God is in charge everywhere. Of course, it wasn’t long before the ancient Greeks discovered that the earth is in fact not flat but spherical. Not everyone, however, is convinced of the earth’s inconvenient roundness. Daniel Shenton, head of the modern Flat Earth Society, gives the Scottish verdict: “Not proven.” According to him and his fellow “flat-earthers,” the world is a flat disc, centered on the North Pole, surrounded at its Antarctic rim by a wall of ice. The moon landings, he says, and photos showing the round earth hanging in space, were faked. If any ship or aircraft really did fly past the ends of the earth, he says, it would simply fall off the edge and into the infinite abyss below. These are common phrases you use that have a much different meaning than what you really think. 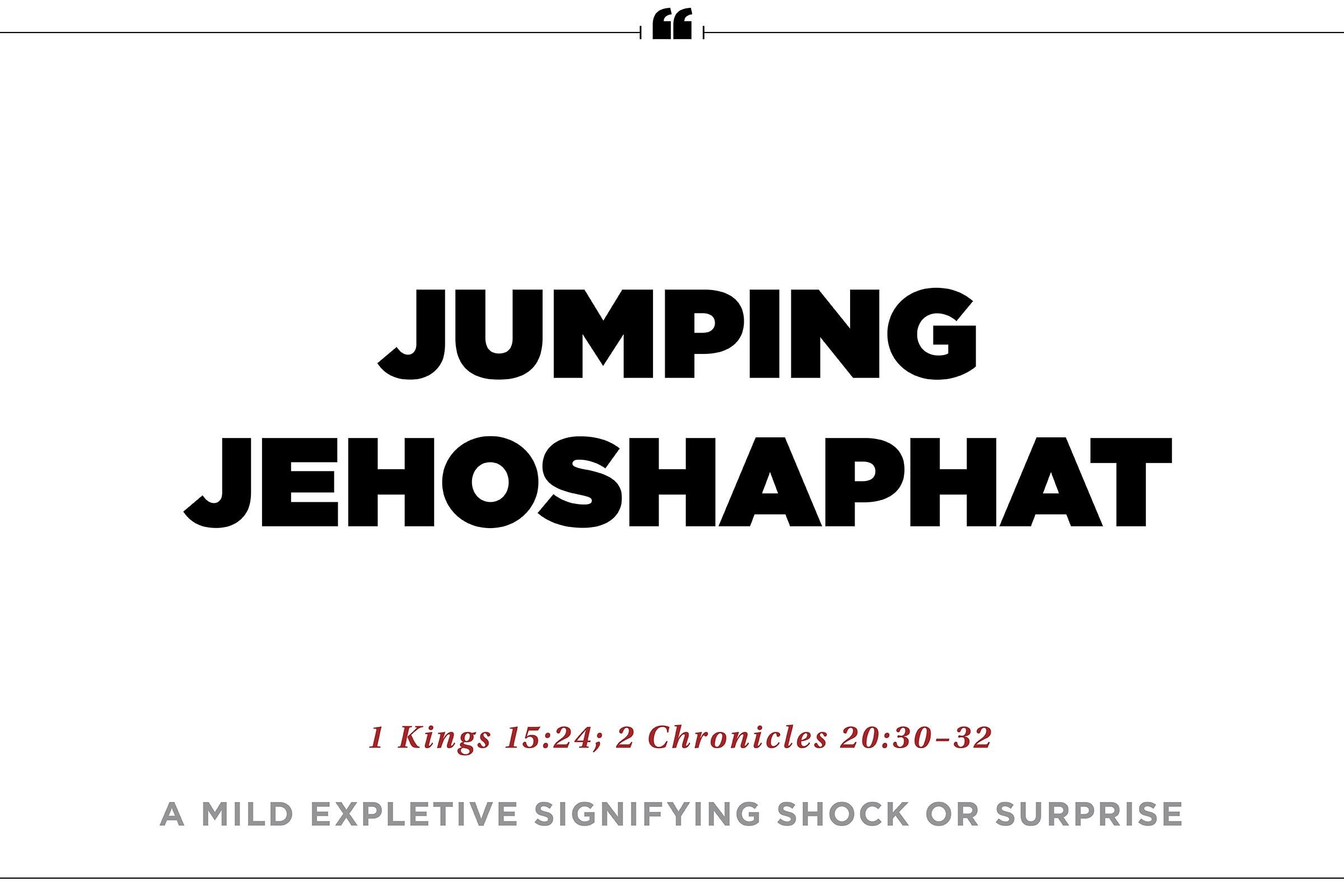 The biblical Jehoshaphat is one of the lesser-known Jewish Kings, who ruled over the southern kingdom of Judah in the ninth century BC. He seems to have done a pretty good job as monarch, doing that “which was right in the sight of the Lord.” But it isn’t his wisdom or justice which have made him famous. In fact, he owes his immortality to the lucky accident of having a name that sounds a lot like “Jesus.” The 10 Commandments forbid Christians from “taking the Lord’s name in vain”—saying “Jesus” or “God” as an expletive counts as blasphemy. So, if an unfortunate “Je–” happens to slip out accidentally, one way to stay within the rules is to turn “Je–” into Jehoshaphat, in the same way that people these days sometimes say “oh fudge!” This typo in the bible originally made adultery mandatory. “Jehosaphat” first appears as an exclamation in Samuel Hammet’s 1857 novel Sam Slick in Texas, and it retains an “Old West” feel today, rarely used without the addition of a corny cowboy accent. As for why Jehoshaphat is so often “jumping,” we can, alas, only speculate.