11 Grammar Mistakes Editors Hate the Most

You're grammar, its "alright"! Ugh! Get ready for the grammar pet peeves that annoy editors the most. Are you a repeat offender? 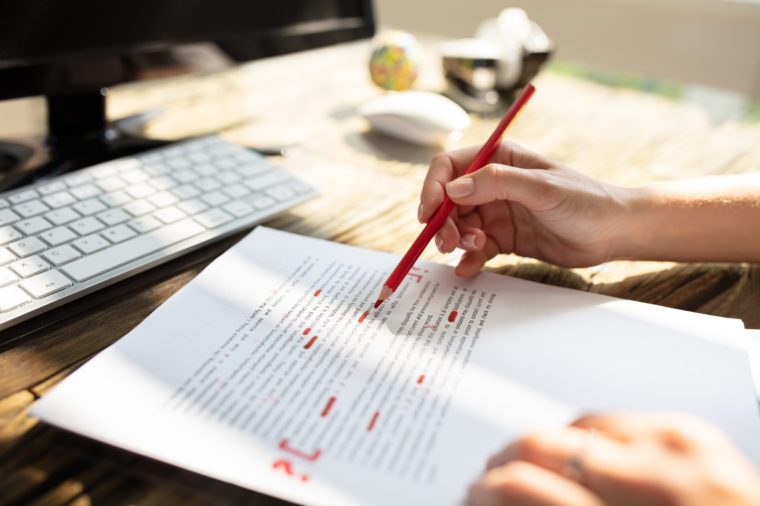 If you think you're (whoops!) your minor grammar errors are no big deal, think again! These little mistakes drive your readers crazy. Especially if that person happens to be an English teacher, college prof, word nerd, punctuation purist, or professional editor! Reader's Digest spoke with two grammar experts and uncovered the small mistakes you're making that can make any knowledgeable reader irrepressibly furious. Pay attention to these not-so-insignificant, easy-to-fix, and all-too-common grammar errors. Feeling like this doesn't apply to you? See if you can pass this high school grammar test—it's not as easy as you might think. 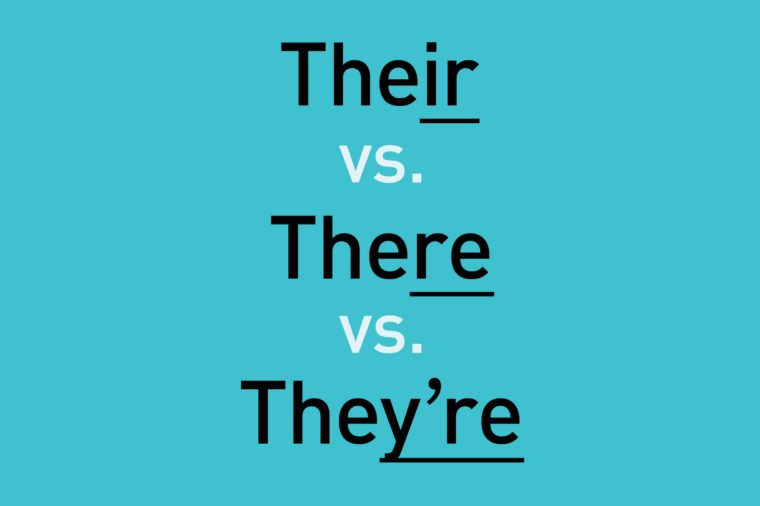 Their vs. there vs. they're

Writer Katy Koontz, editor-in-chief at Unity Magazine and a book editor for best-selling authors, says her adrenaline spikes just thinking about common grammar errors. Koontz reveals, "mixing up 'their' and 'there' is probably my biggest pet peeve—you could add 'they're' to the mix, too, but most mistakes involve the first two." So, how can you make sure to use the right form of this common homonym (that's a word pronounced the same, but with different meanings)? First, keep in mind, "they're" is a contraction for "they are," as in "they're annoying." Next, "there" can be an adverb, pronoun, or a noun indicating a state or condition. Gertrude Stein famously dissed her hometown while demonstrating the pliancy of the word "there" when she wrote "there is no there there." Finally, "their" is the possessive form of the pronoun "they"—its inclusive form (as a pronoun for nonbinary folks) was recently added to the dictionary, along with these 25 new words. 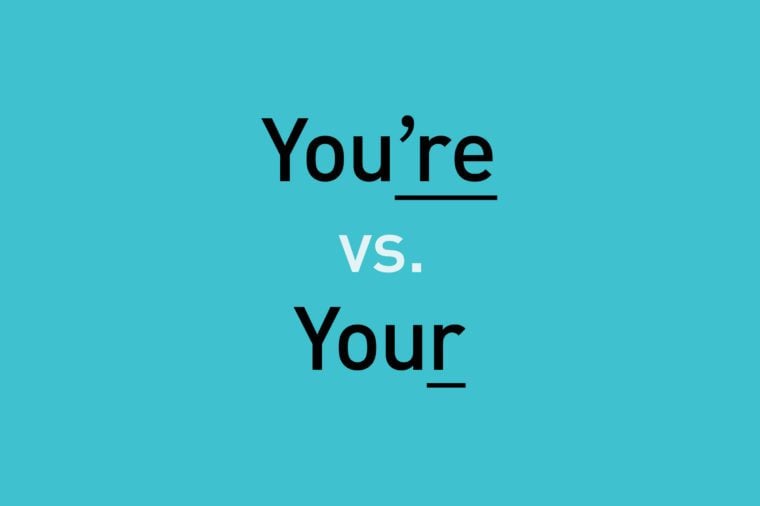 How often do you substitute "your" when you mean "you're?" Koontz offers that "mixing up 'your' and 'you're' is incredibly common—and incredibly annoying." Word aficionados get particularly irked with this grammar snafu despite the irony in reading such examples as "Your an idiot!" or "You're jokes are terrible!" Remember that "you're" is a contraction meaning "you are." Got it? Great! You're smart. "Your" is the possessive form of "you," as in "your big brain," "your gorgeous prose," or "your annoying error." Switch these two forms at your peril, but don't sweat it too hard—even the founding fathers messed up their grammar. Check out these 13 glaring grammar mistakes in the Constitution. 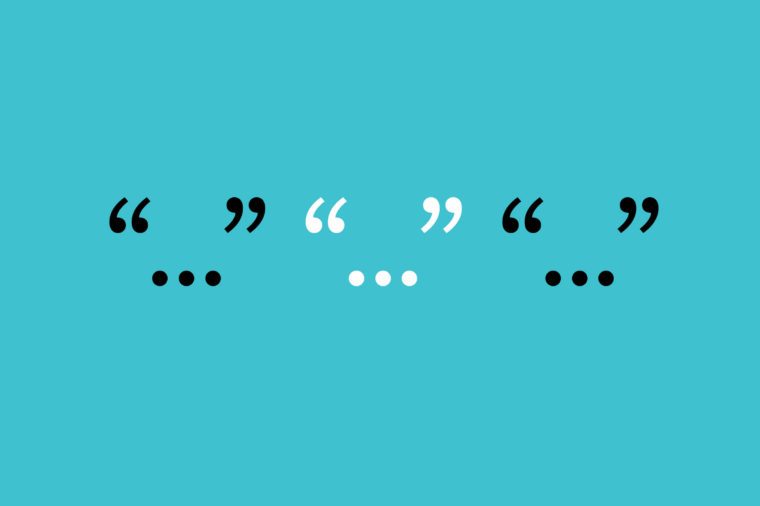 Koontz admits to taking a pen out of her bag and correcting grammar on signs in public places. "I've only done it once or twice, but when a mistake makes my skin crawl I have no shame," she says. Why do so many of us put "quotations" around "certain" words? "Some people use quotation marks for emphasis when instead they should underline (in a hand-lettered sign) or italicize," she explains. So, make sure you italicize a word for emphasis. Quotation marks are totally unnecessary, and they make "zero" sense. Don't miss these 7 hilarious signs that don't get how to "use" quotation marks. 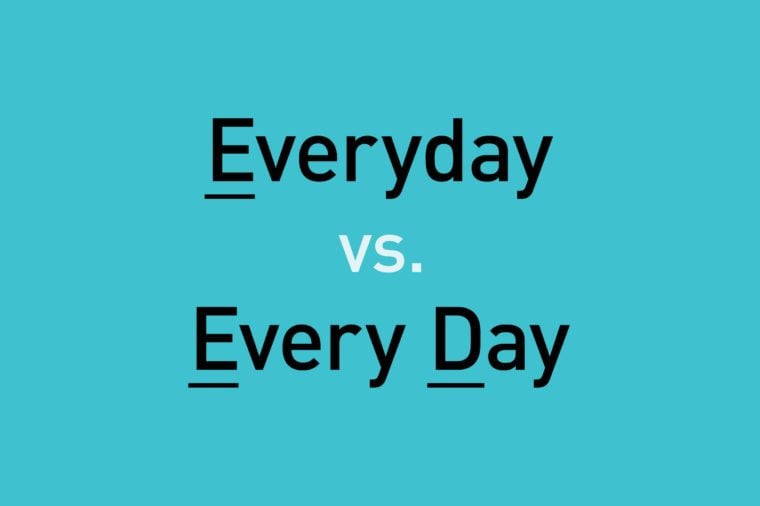 Everyday vs. every day

Have you ever written "everyday" when what you really mean is "every day?" It's an everyday error that you might notice every day. Do you see the difference? Kendra Stanton Lee, an instructor of humanities at Benjamin Franklin Institute of Technology in Boston, finds this mix-up to be one of her biggest pet peeves. "Everyday," one compound word, is usually used as an adjective that means daily or ordinary. In contrast, the two separate words indicate "each day." Stanton Lee says, "I tell my students the way to remember if it's two words is to test whether the sentence makes sense to say 'every single day.'" Make sense? Here are the 20 most confusing rules in the grammar world. 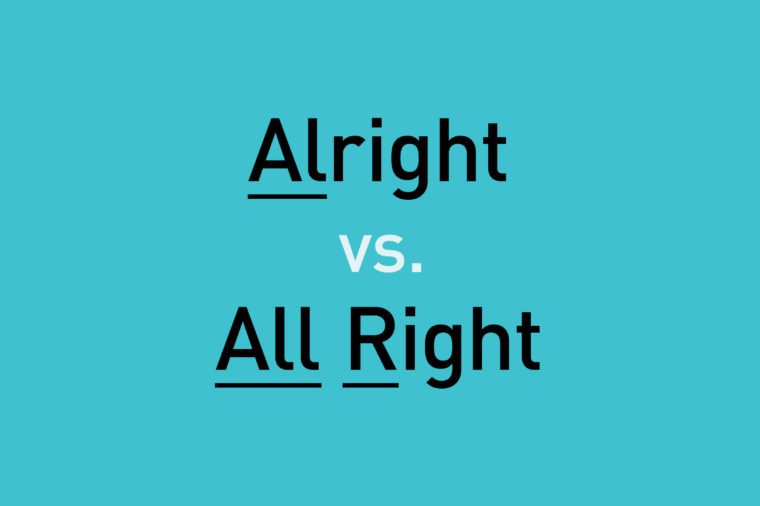 Alright vs. all right

Another of Koontz's most annoying pet peeves occurs when she spots "alright" instead of "all right." Koontz explains, "When iPhones first offered the dictation feature, they got this wrong every time and it drove me crazy. And yes, I did actually send Apple an email about it. I never got a response, but others must have complained too because it's fixed now." Whew! Thank goodness everything is all right now! "Alright" is in the dictionary, but it skews informal, which is why Merriam-Webster recommends you use the far superior "all right." Do you tend to swing informal grammar-wise? Play it safe and check out the grammar rules you still have to follow on social media. 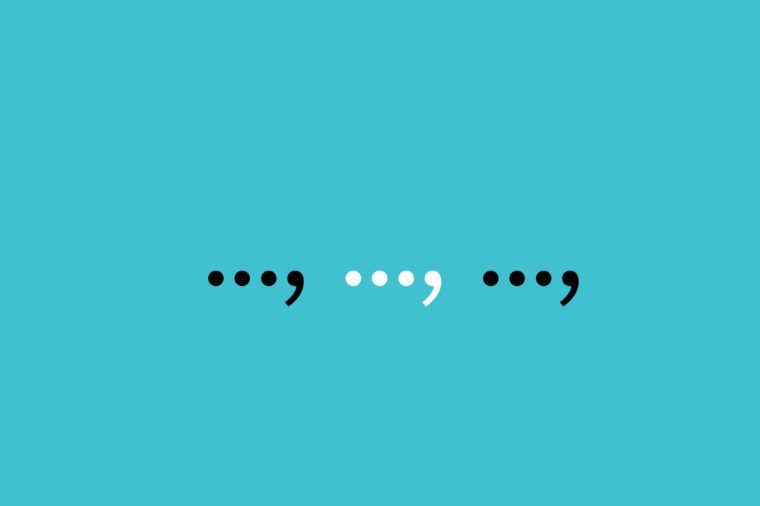 Of all the punctuation marks, the comma is the most misused and abused. There are strict rules for commas, but they're often forgotten, abandoned, and revised. "People love commas," Koontz says. "They love them so much they use them all the time, sprinkling them about their sentences with wild abandon. What annoys me the most with this is when people insert a comma between the subject and the verb. Those pandas, are so cute. Just no." Ready to stop being a comma offender once and for all? Check out these 12 comma rules everyone needs to know. 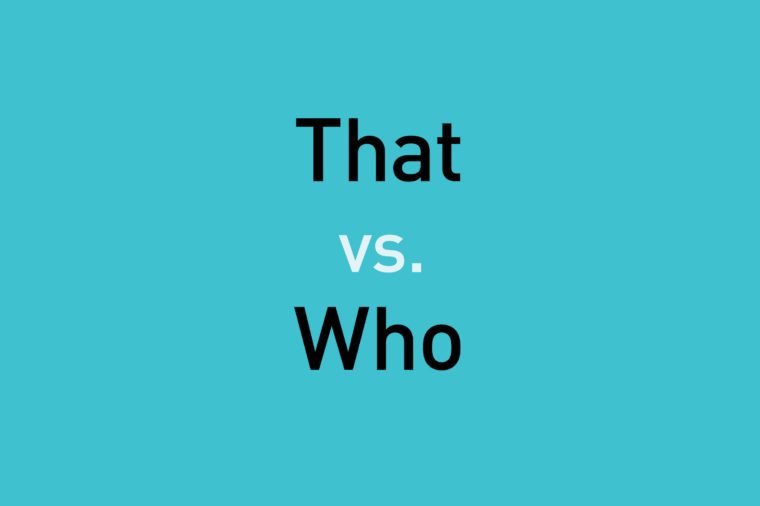 This grammar error often shows up in writing when “that” is used instead of “who” when referring to a person, as in “She’s an editor that knows all the rules.” It should be “who knows all the rules” since you’re referring to a human person. Use "that" in sentences like "It's the grammar rule that always gets me." Koontz advises that you must always use "who" when you're talking about a person. She explains, "For example, she's a woman who knows what she wants, not a woman that knows what she wants." Proceed with caution if you confuse “who” with “whom” –“whom” is increasingly antiquated and pretentious, but it stresses out grammar formalists if you use it incorrectly. Got it? If you're ready for a real grammar challenge, don't miss the misplaced modifier error you're probably making. 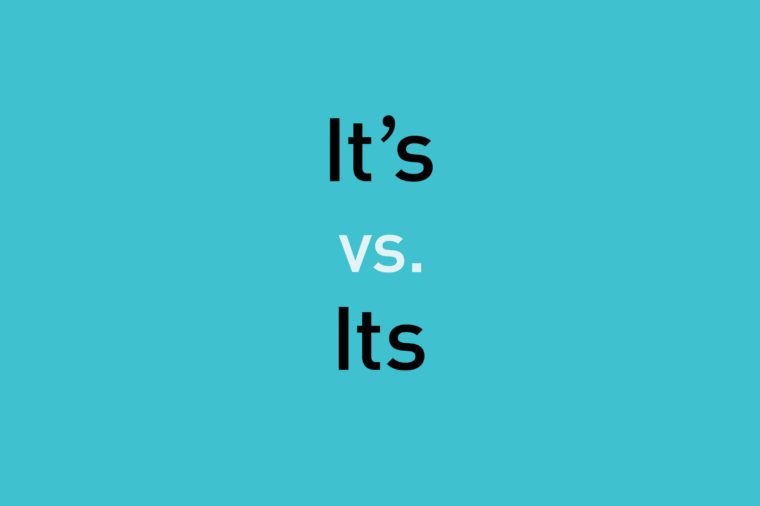 Why is it so hard to keep these two straight? Koontz has an easy fix for this mix-up: she explains that you need to "remember that there is no apostrophe in 'his' or 'hers' so there wouldn't be one in 'its' when it's used to show possession." "Its" (without an apostrophe) is a possessive form; use "it's" when you mean "it is." Koontz offers "all contractions use apostrophes, so you'd definitely use an apostrophe if what you mean is 'it is.'" English is amazing so it's important not to violate its grammar rules. You still have to avoid this mistake, but the rules are loosening up a bit—here are 12 grammar rules that changed in the last decade. 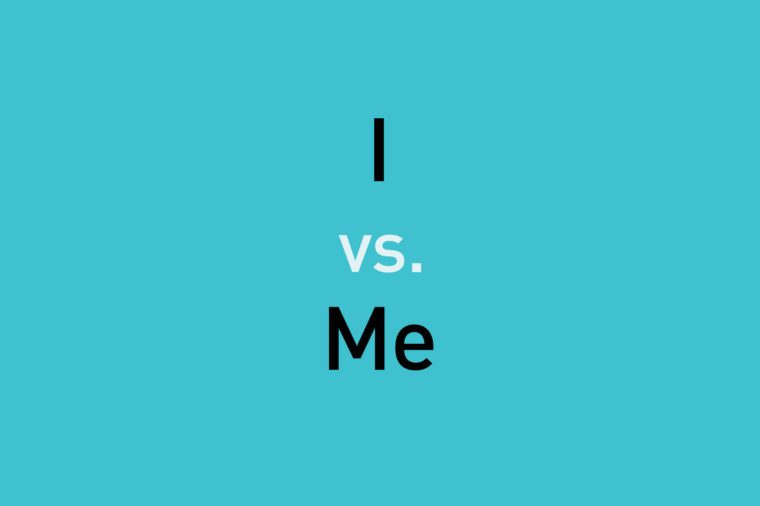 Want to drive grammar experts crazy? All you have to do is use "I" as the object of a preposition instead of "me." You probably do it all the time. Big win for grammar outlaws! Terrible annoyance for editors and other grammar purists. Koontz has a great tip for learning the difference between "I" and "me" and knowing which to use when: Koontz advises that "you'd say 'Our friends threw a big party for Sam and me,' not 'for Sam and I.' You wouldn't say 'They threw a big party for I,' would you? If you could say 'for me,' then you would say 'for Sam and me.'" 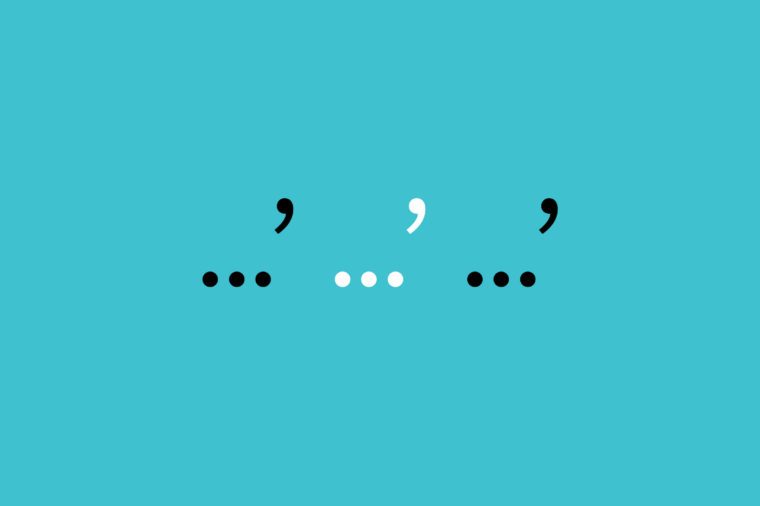 Writers frequently pop apostrophes where they don't belong. As one example of this frequent mishap, Koontz offers up, "The Smith's aren't coming to dinner. The Smiths are, though. An apostrophe shows possession, it doesn't make a word plural. This shows up with decades a lot—the 1960s were tumultuous, not the 1960's." Check out these 10 ways to finally learn apostrophe rules and get those little off-the-ground commas just right once and for all. 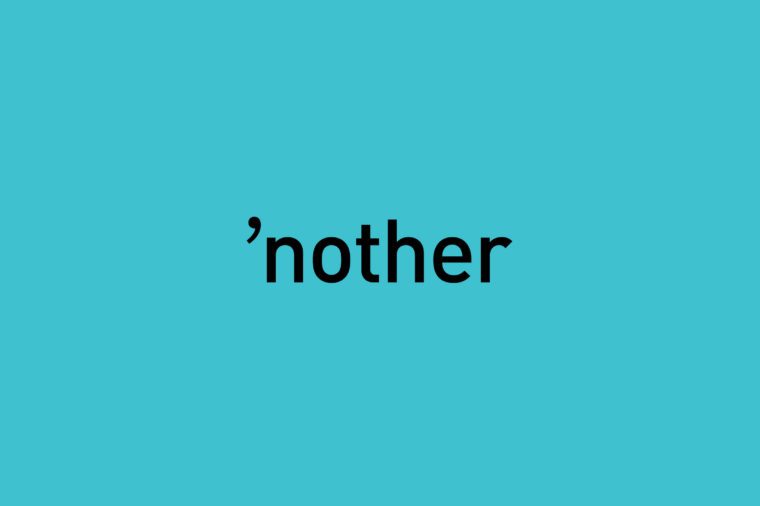 And a 'nother thing

In grammar, a contraction allows you to omit a letter or letters and use an apostrophe as a replacement. This offers a shortened, often more informal form. Stanton Lee says the use of "whole 'nother" is quickly becoming a serious problem. "When did we stop questioning the contractions we use?" she asks. Time to take it easy on "whole 'nother" to keep things less 'nnoying. Still curious about contractions? Check out the reason why "will not" isn't "willn't."