Here’s the Surprising History Behind Your Favorite Christmas Carols

"Reginald The Red-Nosed Reindeer"? Frosty and the "One Horse Open Sleigh" had nothing to do with Christmas? These and more strange facts ahead. 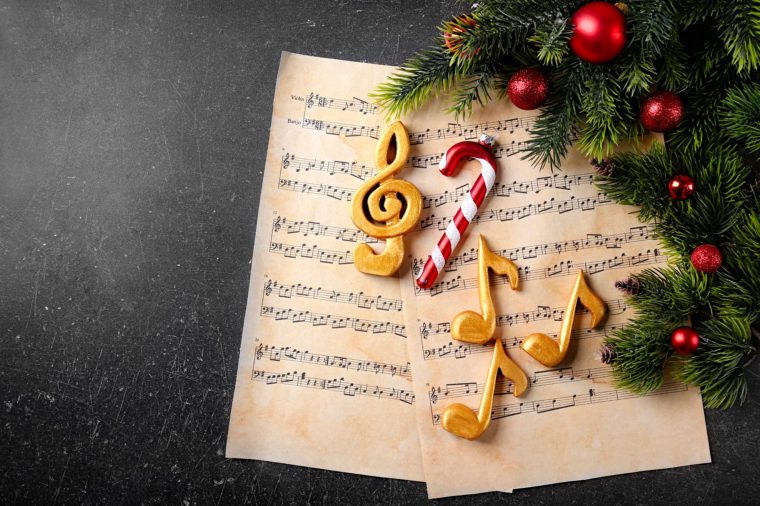 The history of Christmas carols

Singing holiday songs goes hand in hand with baking Christmas treats and learning the story of Santa Claus and Rudolph the Red-Nosed Reindeer. Like everything around the holidays, everything has a story. From songs that have been saved from being erased forever to not really knowing for sure where a song came from, here is the history of a few Christmas Carols you know and recognize today. This is what Christmas looked like the year you were born. 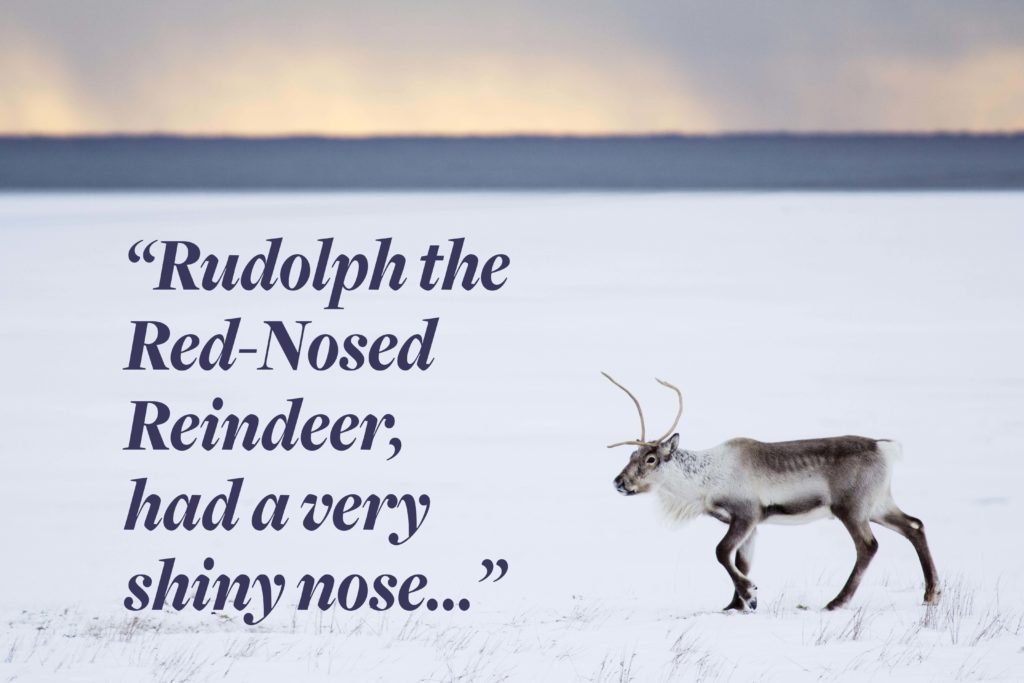 Rudolph got his start in advertising

In 1939, with the Great Depression starting to fade and World War II lurking, Christmas cheer was in short supply. Montgomery Ward department store HQ took it upon themselves to get children and families into the holiday spirit by creating a free book for kids. Adman Robert May came up with the idea of a reindeer as his main character. According to History.com, "As he peered out at the thick fog that had drifted off Lake Michigan, May came up with the idea of a misfit reindeer ostracized because of his luminescent nose, who used his physical abnormality to guide Santa's sleigh and save Christmas."

As a limerick writer, May loved alliteration; he brainstormed different names that began with the letter "R" like Reginald and Rodney. Luckily Rudolph stuck because singing about "Rollo the Red-Nosed Reindeer"—another of his tries—just wouldn't be the same. The book was a huge success for Montgomery Ward, but they signed over the copyright to May in 1947. Two years later, May's brother-in-law Johnny Marks, a songwriter, put Rudolph's story to music life. History.com notes that Bing Crosby was given the first crack to sing "Rudolph the Red-Nosed Reindeer," but Gene Autry recorded the song after Crosby turned it down. That was a big mistake since two million copies were sold and the song continues to be one of the best-selling of all time. Check out these true stories of Christmas miracles. 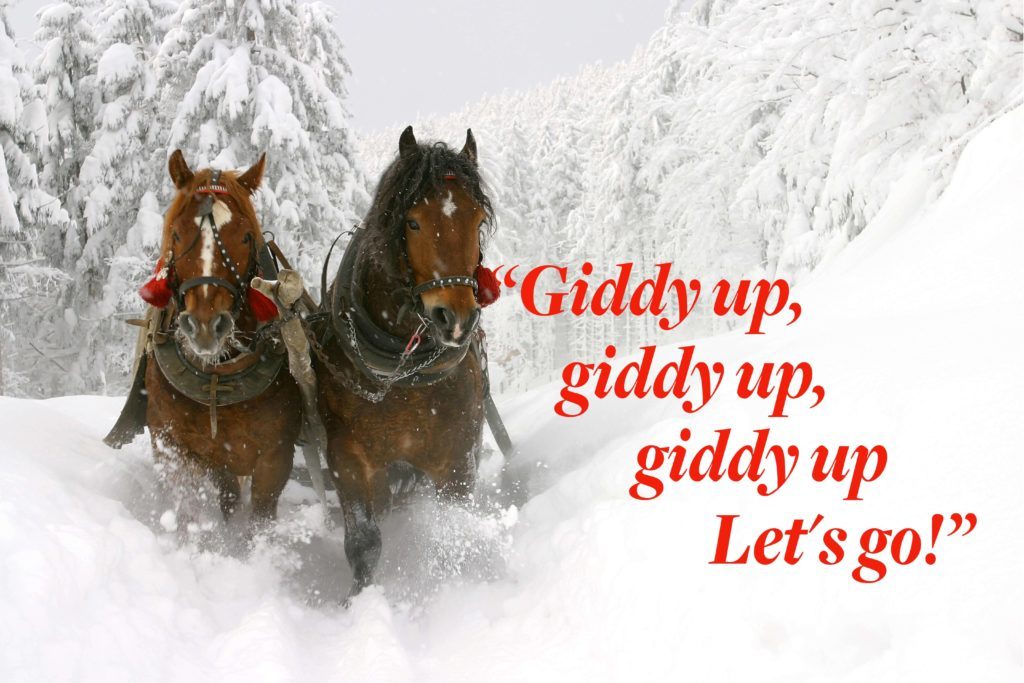 It's been 60 years since Leroy Anderson wrote "Sleigh Ride," yet it remains one of our favorite Christmas songs. The song has been named the most popular piece of Christmas music in the United States every year between 2009 and 2012, and again in 2015 by the American Society of Composers, Authors, and Publishers. That's pretty impressive considering Christmas isn't even mentioned in the lyrics. According to LeroyAndersonFoundation.org, "Leroy didn't set out to write a Christmas piece when he wrote 'Sleigh Ride.' His intentions were to convey the entire winter season through the imagery of a sleigh ride, much in the way that Mozart did with his piece of the same name," shared the composer's widow Eleanor Anderson. Despite that, singing "Sleigh Ride"—just as baking Christmas cookies and other holiday traditions—has become synonymous with spreading cheer.

Christmas in July anyone? The inspiration for the song didn't even occur during the winter. It was during a July heat wave and drought, while Leroy was working out in the yard of his summer home in Connecticut, that the idea came to him. The song premiered on May 4, 1948 by the Boston Pops Orchestra at Symphony Hall in Boston. Read more about the history of Christmas traditions. 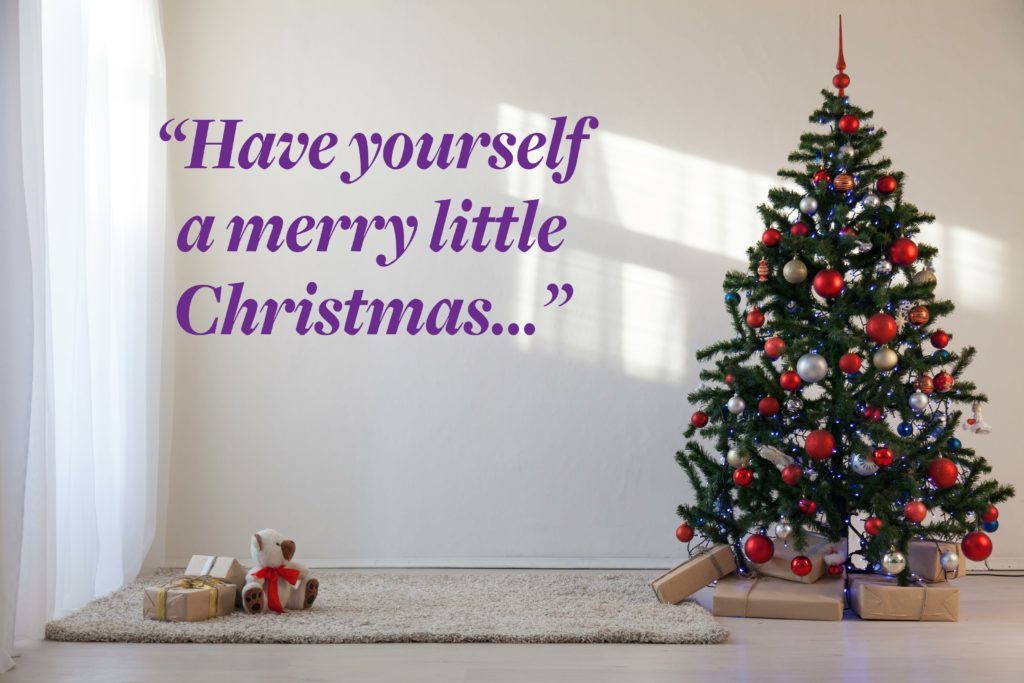 Saved from the trash

Songwriter Hugh Martin was fooling around with a little melody back in 1944, but it wasn't working. "So he played with it for two or three days and then threw it in the wastebasket," his songwriting partner Blaine told NPR in 1989. Blaine made him get it out of the trash. And it's a good thing—the song ended up being "Have Yourself a Merry Little Christmas."

Martin was writing the song for the film Meet In St. Louis—one of the top 20 Christmas movies of all time. Supposedly, the song was a bit too melancholy for Judy Garland's character in the movie, so Martin and Blaine rewrote the lyrics to be cheerier."The [film producers] said, 'It's a sad scene, but we want a sort of upbeat song, which will make it even sadder if she's smiling through her tears," Martin said. "Then we wrote the one you know in the movie." The song was a hit and has been remade by many artists from Frank Sinatra to Twisted Sister to Tori Amos. Find out the Christmas song that was actually written for Thanksgiving. 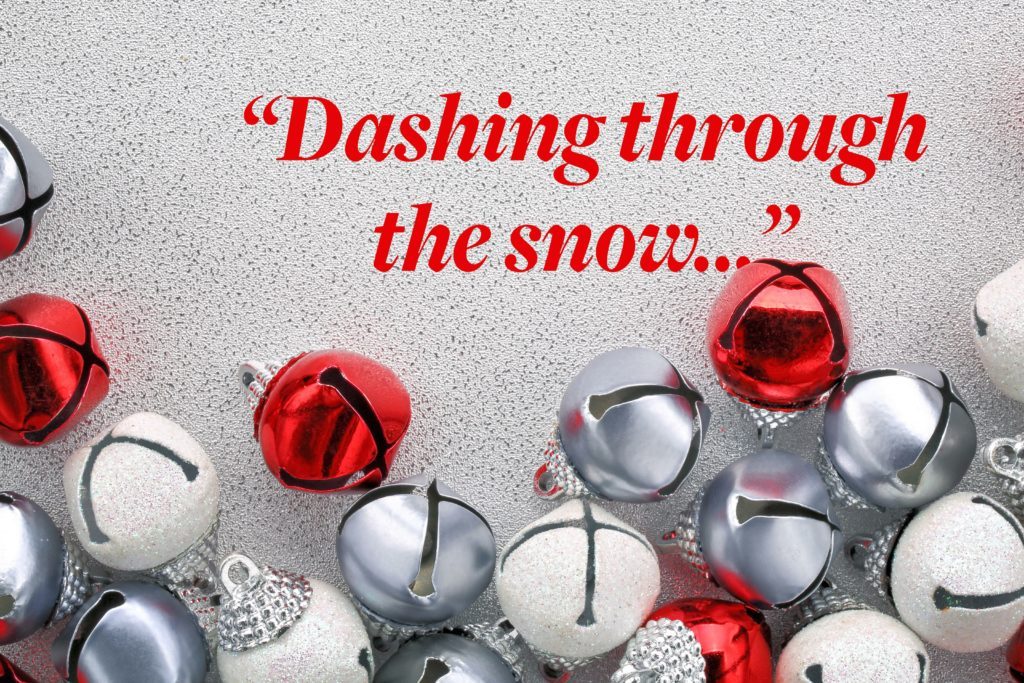 The One Horse Open Sleigh

What we know as "Jingle Bells" began life as "The One Horse Open Sleigh." The songwriter, James Lord Pierpont of Medford, Massachusetts, didn't plan it as a holiday tune. He wrote it on Thanksgiving in 1850 for the children in his father's Sunday School class, according to AmericanMusicPreservation.com. But the song proved to be so popular, they sang it again at Christmas, and the rest is history; "Jingle Bells" were added to the title in 1859. The 1943 version by Bing Crosby and the Andrews Sisters is still the most popular today. Fun fact: James Pierpont was a nephew of John Pierpont Morgan, the famous wealthy New York financier and founder of the Pierpont Morgan Library. 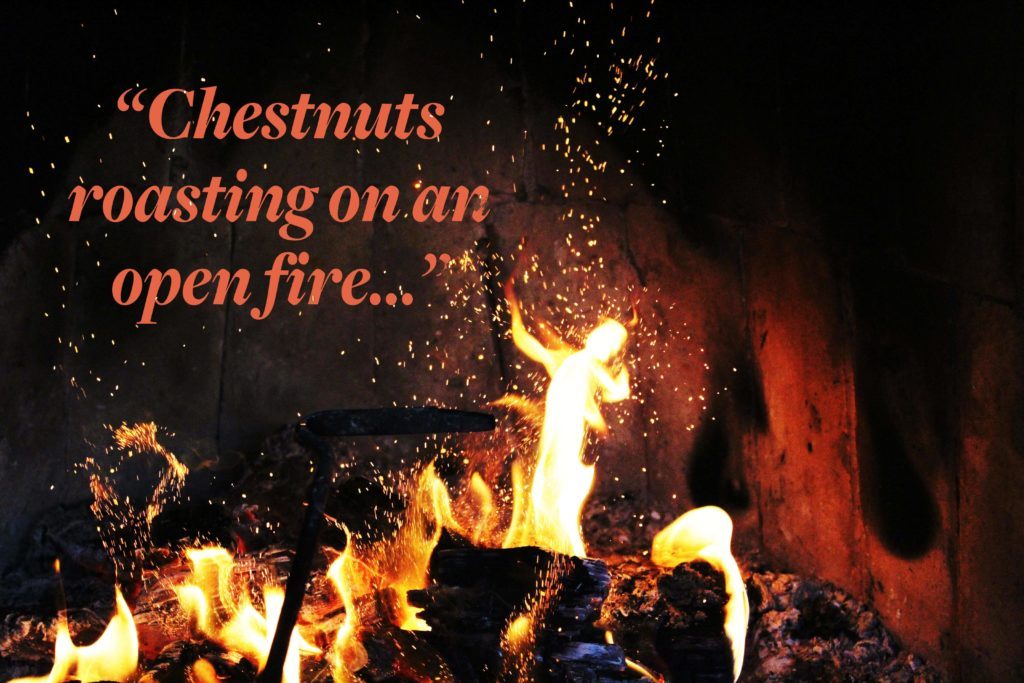 The first holiday standard sung by a black American

According to Performingsongwriter.com, another song written in the heat of July was "Chestnuts Roasting On An Open Fire," a.k.a. "The Christmas Song." It was songwriter Mel Tormé who spotted the potential in the lyrics sitting on the piano of his songwriter partner Bob Wells.

"It's so damn hot today, I thought I'd writing something to cool myself off," Wells explained. "All I could think of was Christmas and cold weather." Tormé banged out a melody and the rest is history. Per his autobiography he wrote, "Improbable though it may sound, 'The Christmas Song' was completed about 45 minutes later."

History was made when Nat King Cole became the first black American to record a holiday standard, using this hit tune. And he recorded two versions: In the 1946 first pressing, Cole added a superfluous "s" to the last line, "To see if reindeers really know how to fly." A stickler for perfection, Cole recorded the song again taking care to sing "reindeer"—and now the first pressing is a collectors' item. Cole's version is one of the top Christmas songs of all time—check out the rest, here. 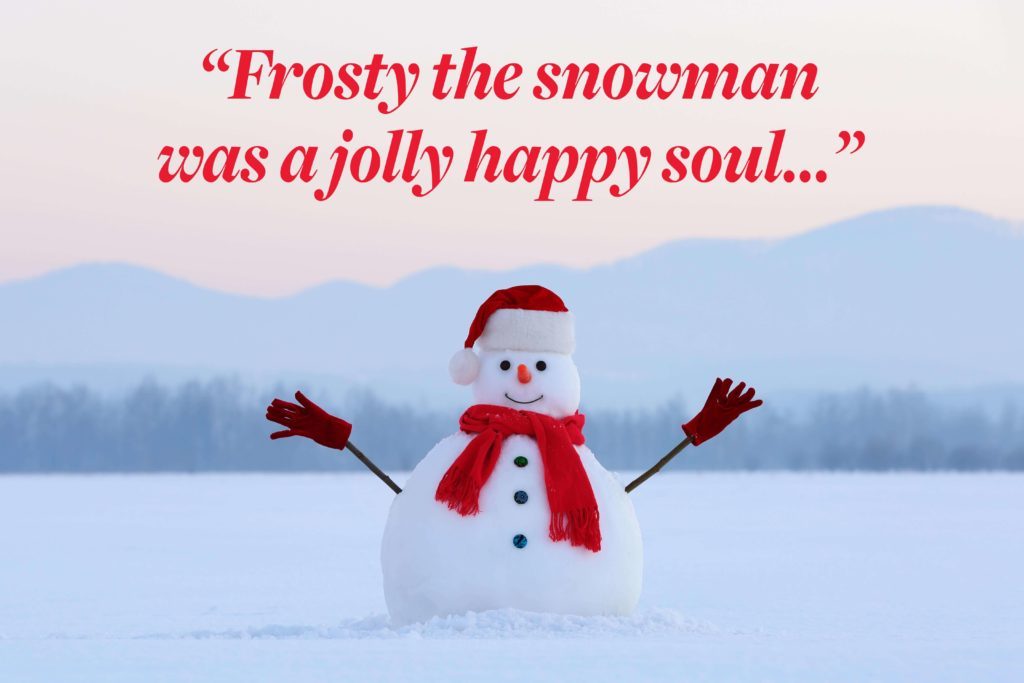 No Christmas for Frosty 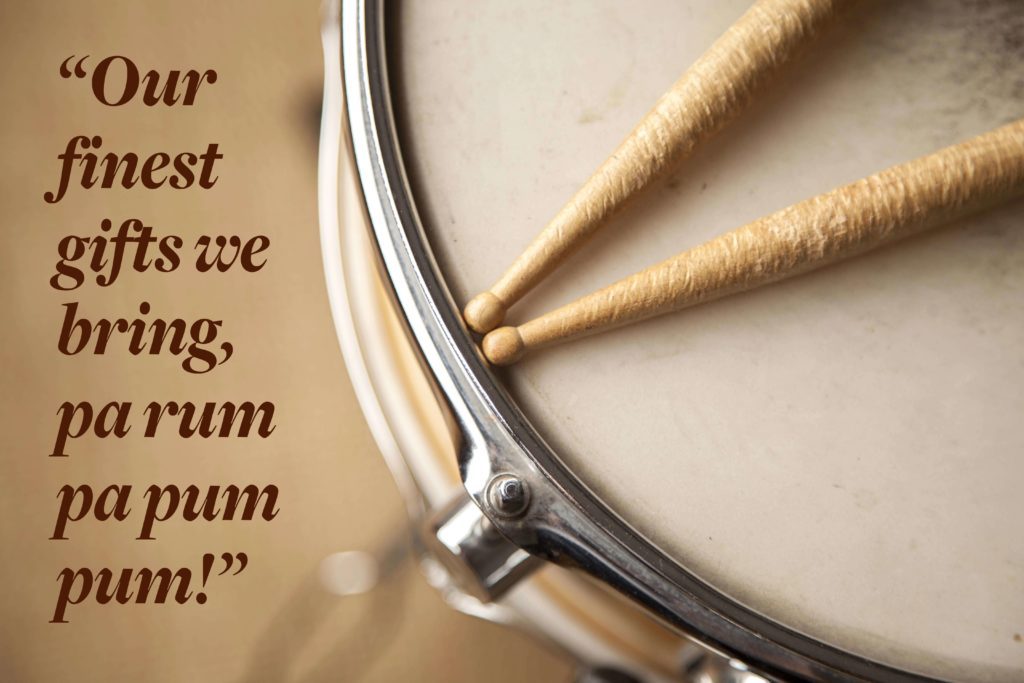 Who's responsible for the Little Drummer Boy?

No one knows for sure who wrote this popular Christmas carol once called "Carol of the Drums" due to the refrain "pa rum pum pum pum" that sounds like the beating on a drum. Credit has been attributed to famous American classical music composer and teacher Katherine K. Davis—who may have based the song on an old Czech carol—though the recording artists Henry Onorati and Harry Simeone also get credit. And the daughter of composer Jack Halloran claims that her father was the originator of the version we all know and love. While we may never know what the true source of this song is, you can bet you'll have the refrain stuck in your head for the duration of the season. Find out what was the oldest Christmas carol. 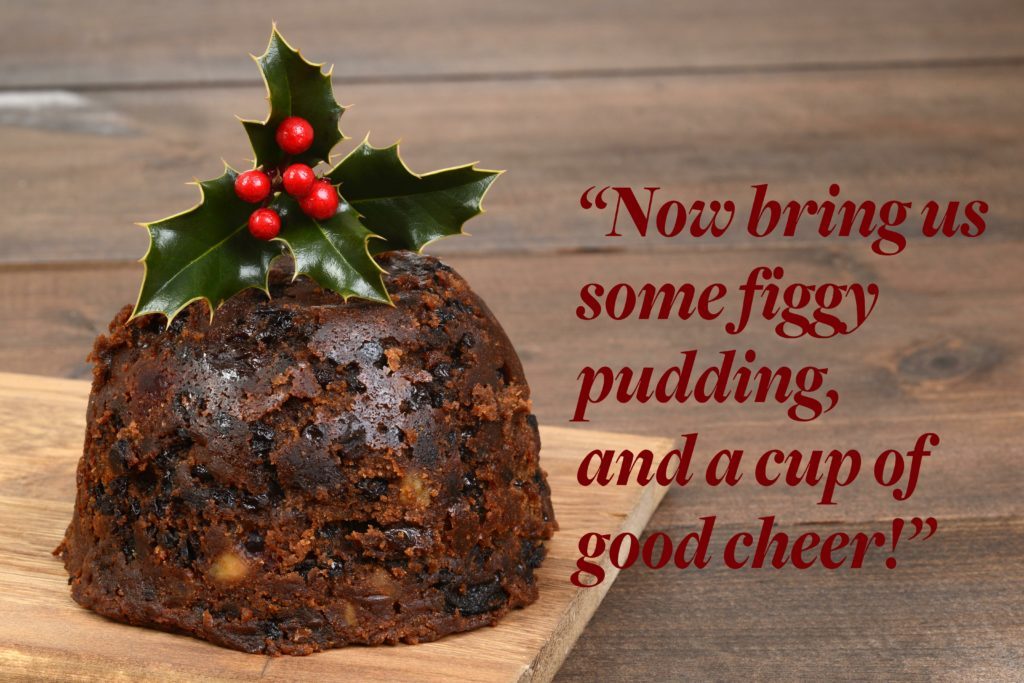 Although figgy pudding may have fallen out of fashion, the carol "We Wish You a Merry Christmas" is still going strong. It dates back to the 16th century, but no one knows who actually wrote it. It truly embodies the caroling spirit: According to Christmascarnivals.com, it epitomizes the traditions "of showering gifts house to house and singing Christmas songs as they went." Get a jump on Christmas morning with these make-ahead brunch recipes. 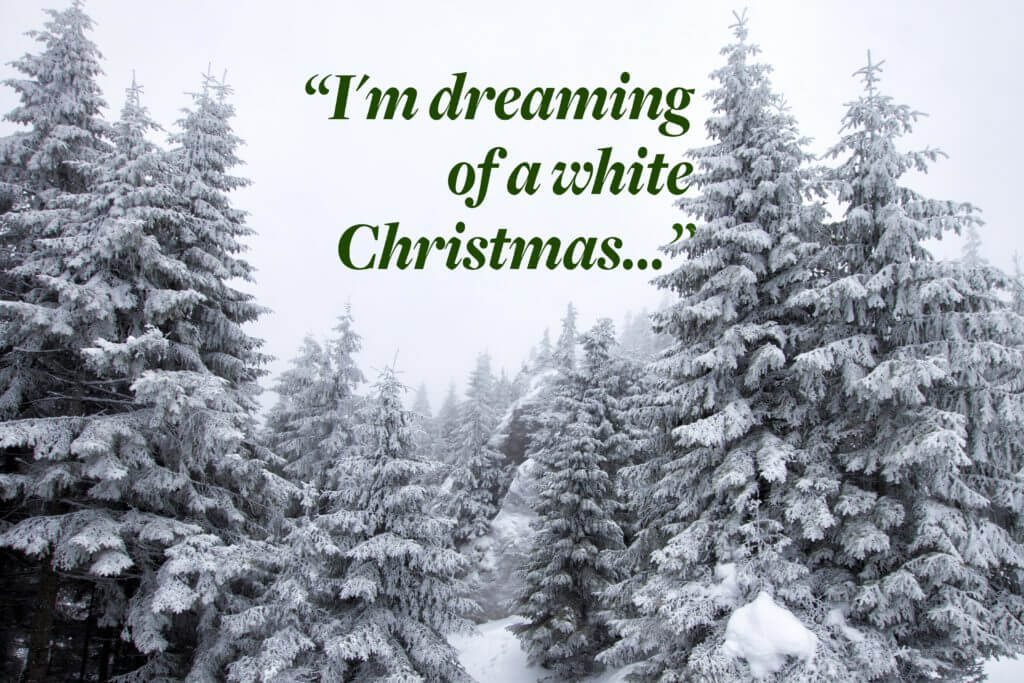 Composer Irving Berlin didn't write "White Christmas" full of Christmas cheer: He usually spent the day visiting the grave of his three-week-old son, who died on Christmas in 1928, which helps explain the melancholy feel of the song. When Bing Crosby made the song famous on a broadcast in 1941, it was a mere 18 days after the attack on Pearl Harbor.

Kuow.org wrote that when Crosby traveled overseas to perform for troops, the song was the most requested. "I hesitated about doing it because invariably it caused such a nostalgic yearning among the men, that it made them sad," he said in an interview. "Heaven knows, I didn't come that far to make them sad. For this reason, several times I tried to cut it out of the show, but these guys just hollered for it."

According to NPR.org, for 72 years, it has remained the most popular Christmas song. If you're feeling some holiday blues, here's your guide to dealing with sadness during the holidays.