The 20 Most Iconic Royal Wedding Photos Throughout History

Royal weddings are a huge deal, but there have probably been more of them than you think! Get a look at these beautiful photos dating all the way back to 1863. 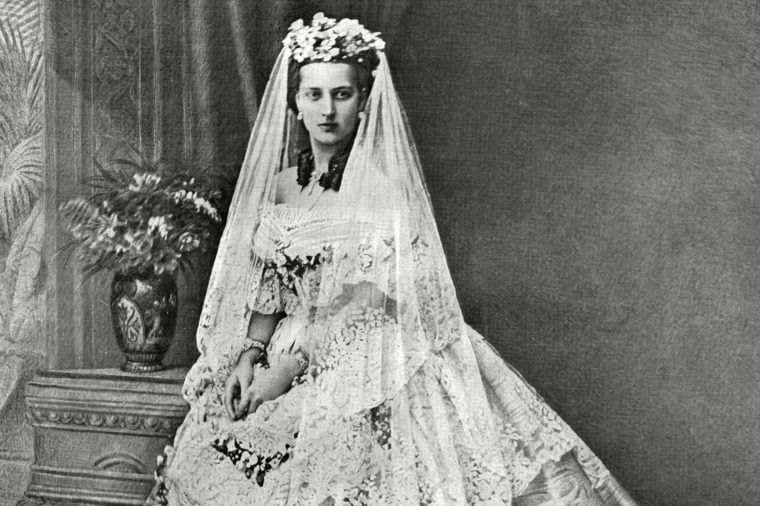 Way back in 1863, this was one of the first royal wedding photos ever. Queen Victoria's eldest son, Albert Edward, Prince of Wales, married Princess Alexandra of Denmark on March 10. The wedding took place at St. George's Chapel in Windsor. At the time, Queen Victoria was mourning her husband, Prince Albert, who had passed away in 1861. She wore black to the ceremony and stood above the proceedings on a balcony rather than taking part in the procession. Prince Albert Edward would become King Edward VII in 1901. Here, his wife Princess Alexandra poses in her beautiful English silk gown. Speaking of royal wedding dresses, learn about Kate Middleton's little-known second wedding dress. 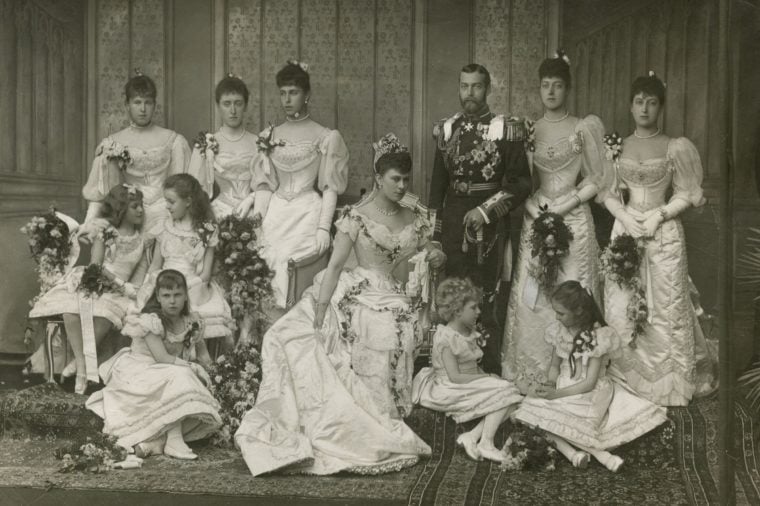 Thirty years after his own wedding, Prince Albert Edward (then King Edward VII)'s son, Prince George, married Victoria Mary, the princess of Teck (a castle in Germany's kingdom of Württemberg). The circumstances of this wedding ceremony were rather grim; Princess Victoria Mary was originally betrothed to Prince George's older brother, Albert Victor, who died in 1892. Both Queen Victoria (Prince George's grandmother) and Victoria Mary's own parents made it clear that they wanted George and Victoria Mary to wed, and they did on July 6, 1893. In spite of the tragic circumstances, the couple seemed happy together and remained married until George's death. The ceremony took place at the Chapel Royal in St. James’ Palace. 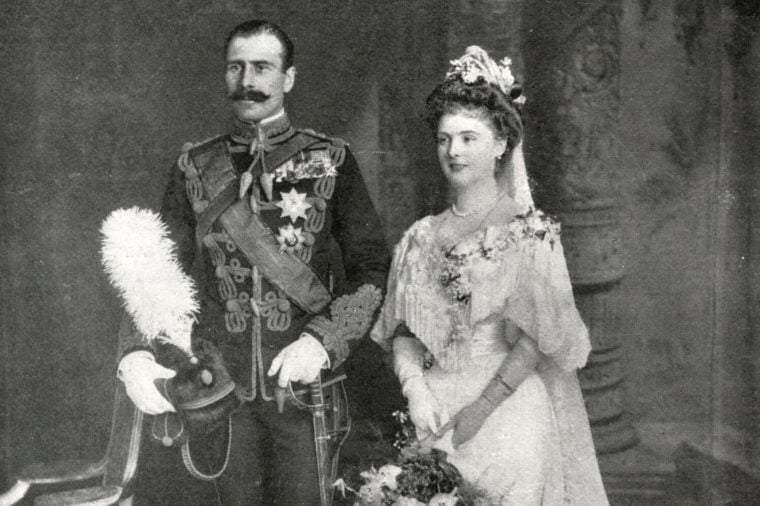 Princess Alice was Queen Victoria's granddaughter, the child of her fourth son, Prince Leopold. On February 10, 1904, she married her second cousin once removed, Prince Alexander of Teck. The wedding took place at St. George's Chapel. Eagle-eyed viewers might notice from her royal wedding photos that Princess Alice is only wearing one glove. These are the 10 dress code rules the royal family must follow. 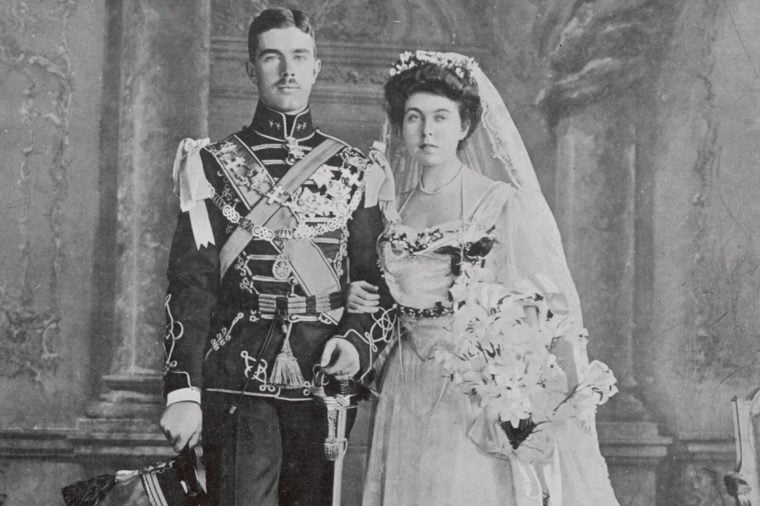 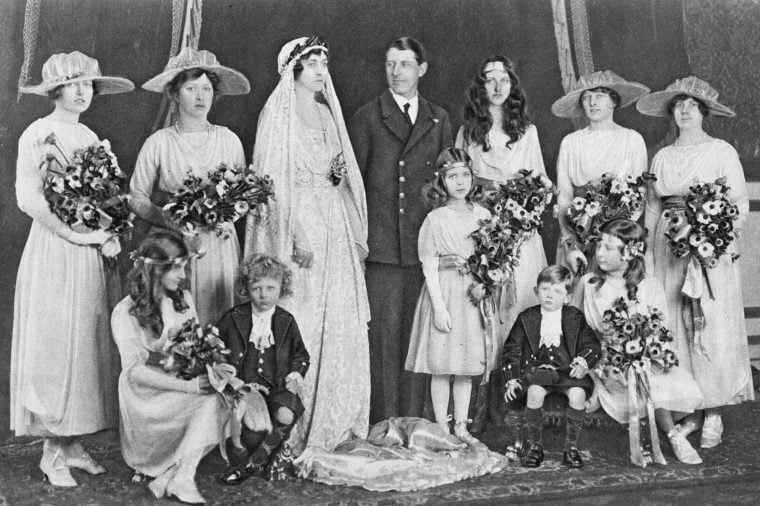 Princess Margaret's younger sister Princess Patricia finally got her happy ending on February 27, 1919. Despite her many courtships with royals from all over Europe, she eventually chose to marry a commoner: the naval commander Alexander Ramsay. The wedding took place at Westminster Abbey, at Patricia's request; it was the first royal wedding held there in nearly 600 years! After it, Patricia made the decision to relinquish her royal titles, officially going by "Lady Patricia Ramsay" rather than "Princess of Great Britain and Ireland" or "Royal Highness." However, she didn't distance herself completely from the royal family; she and her husband continued to attend royal events. Here are some amazing perks you never knew the royal family had. 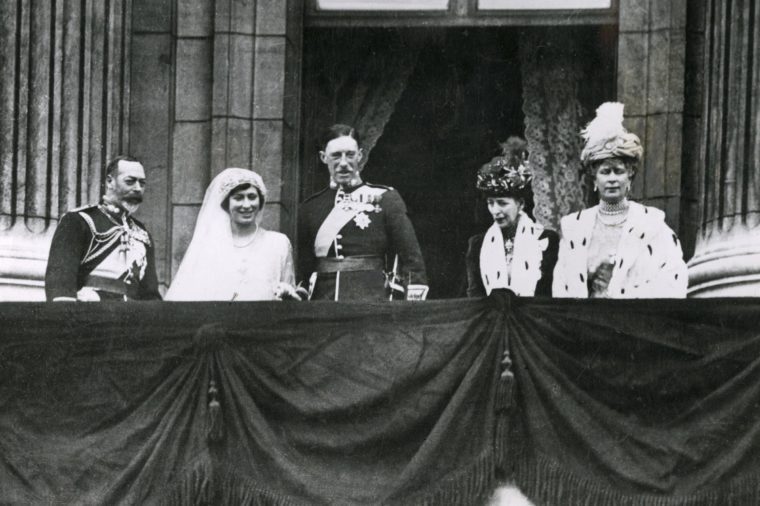 Princess Mary, the great-granddaughter of Queen Victoria and daughter of Prince George (then King George V), married Viscount Henry Lascelles at Westminster Abbey on February 28, 1922. Lascelles, the sixth Earl of Harewood, was 15 years older than his bride. The rumors were that her parents were happier about the union than she was, but the pair appeared to be happy once they were married. Princess Mary's and Viscount Lascelles' wedding was the first royal wedding attended by the future Queen Mother, Queen Elizabeth, mother of the current matriarch of the monarchy. Lady Elizabeth served as a bridesmaid. These are the royal wedding rules that the entire royal family must follow. 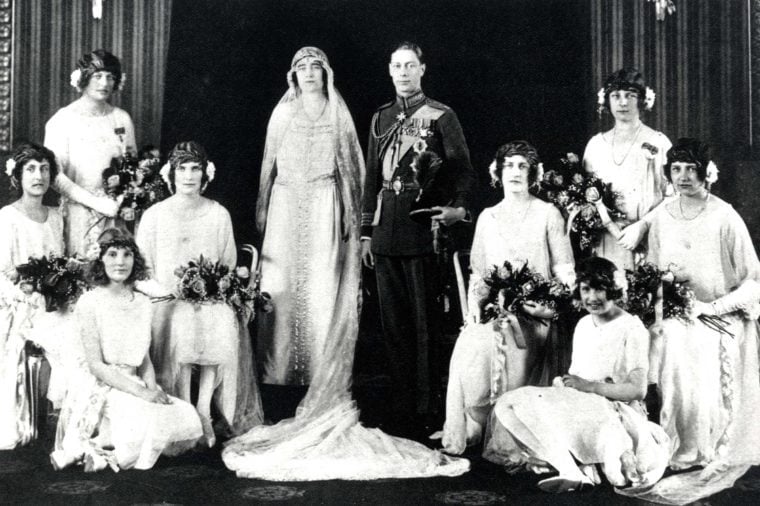 Princess Mary's brother, Prince Albert, fell in love with Elizabeth, who was born into British nobility, but not royalty. Lady Elizabeth turned down Albert's proposal twice, because she was reluctant to live life as a royal. Eventually, though, she accepted. Prince Albert's wedding marked a bit of a departure from tradition; even though he still married a woman of nobility, he did not marry a princess. The two were married on April 26, 1923, in Westminster Abbey. Albert and Elizabeth would become King and Queen only 13 years later, when Albert's older brother Edward VIII abdicated the throne. Though she'd initially resisted royal life, she was greatly beloved by the public, especially in her later years. 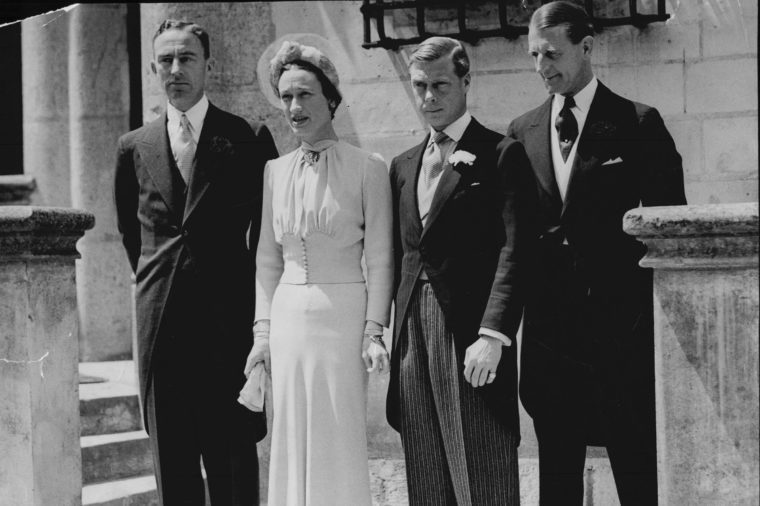 This was one of the smallest royal weddings in history—and one of the most controversial. Prince Edward was the older brother of Prince Albert, and the brother whose abdication of the throne forced Albert to take over. Edward, who had never married, had only been king for a few months when he began courting, and eventually proposed to, Wallis Simpson, an American socialite who was in the process of divorcing her second husband. This was a union that the rest of the royal family highly disapproved of, so Edward eventually chose to abdicate the throne and marry her. Prince Albert, who became King George VI upon his accession, forbade any members of the royal family from attending the wedding, and there were only about seven guests. The wedding took place at Château de Candé in France on June 3, 1937. 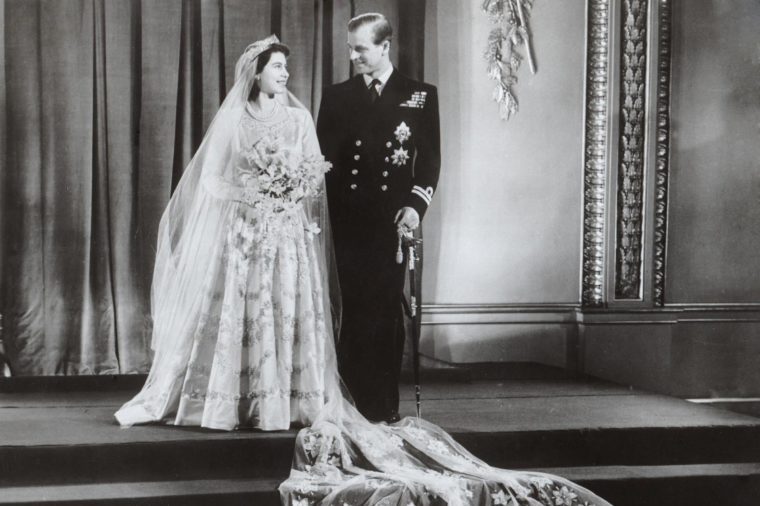 Before she was Queen of the United Kingdom, Elizabeth II was a princess—the daughter of Prince Albert (later King George VI) and Lady Elizabeth Bowes-Lyon, later Queen Elizabeth the Queen Mother. Philip was a prince of Greece and Denmark, and the pair met at a wedding. The two actually got engaged in secret; Philip asked her father for her hand in 1946, when she was 20, but he insisted that they not make their engagement public until she was 21. The wedding took place on November 20, 1947, at Westminster Abbey. The train of her wedding dress was 13 feet long, decorated with stars, and The Mirror reported that the princess did her own makeup. Check out these other fascinating facts about Queen Elizabeth II. 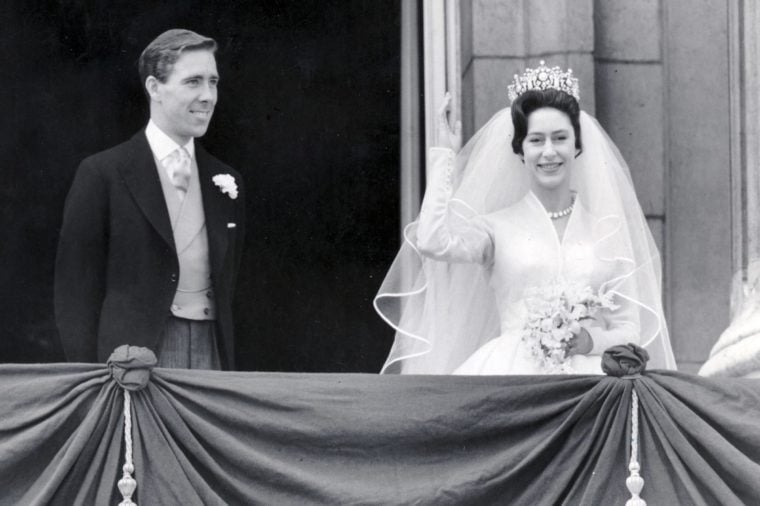 The wedding of Queen Elizabeth II's younger sister and Antony Armstrong-Jones marked a big milestone for royal weddings—taking place on May 6, 1960, it was the first royal wedding that was broadcast on television. The ceremony had over 20 million viewers around the world. Armstrong-Jones was a "commoner," a fashion photographer, so they kept their relationship something of a secret at first. They got engaged in February 1960, and Armstrong-Jones actually designed the engagement ring, which resembled a rosebud. The pair got married at Westminster Abbey. The pair would eventually divorce in 1978, with Armstrong-Jones remarrying. It would be the first major British royal family divorce since 1901. 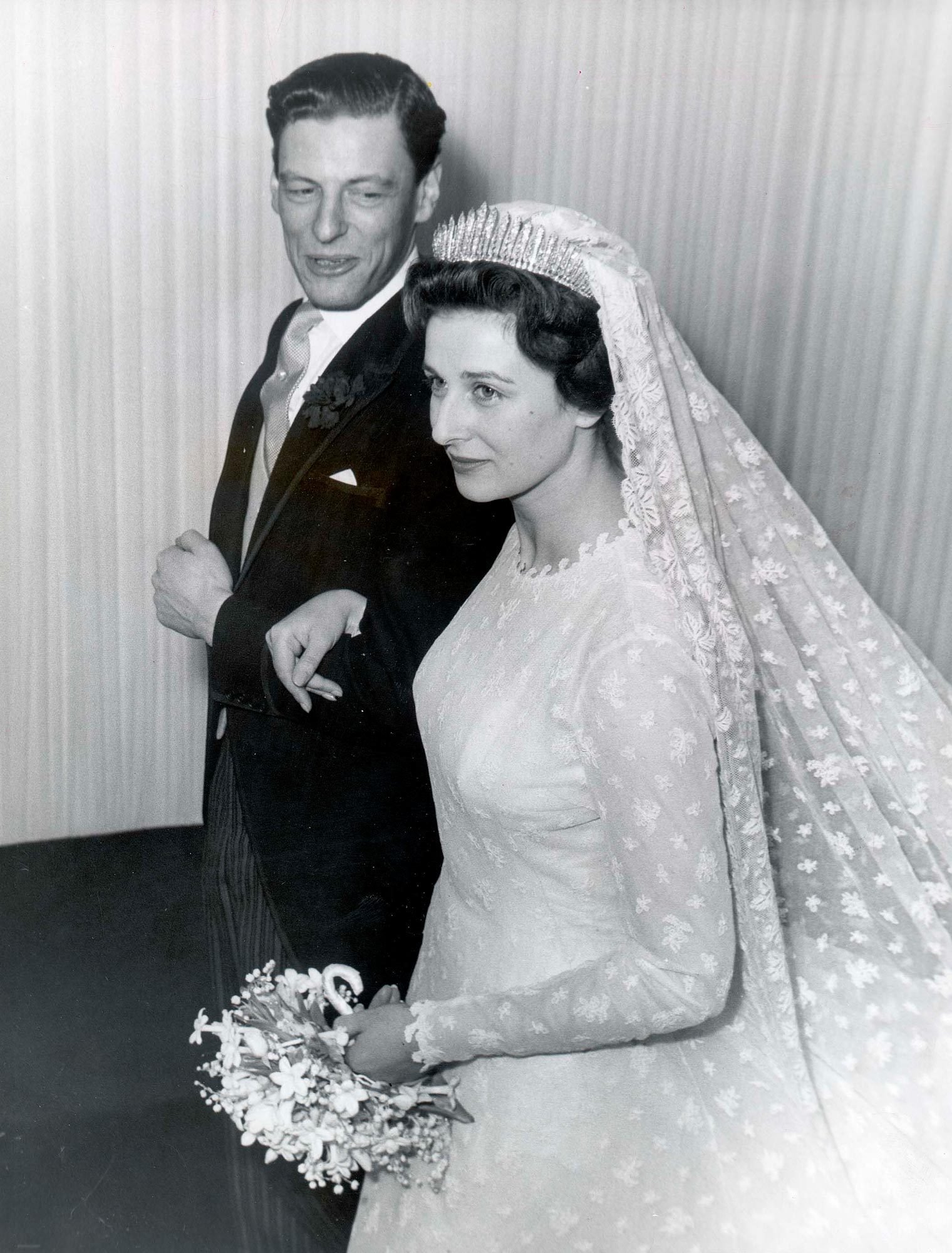 Princess Alexandra is the daughter of Prince George, the brother of King George VI (who was born Prince Albert), making her Queen Elizabeth II's cousin. She married Sir Angus Ogilvy, the son of a British nobleman. Her gown was made of Valenciennes lace. Her husband was offered, but turned down, the title of earl upon their marriage, meaning that the couple's two children have no royal titles. When Alexandra was born, her uncle King George VI was king and she was sixth in line for the throne. Today, at 81 years old, she is...wait for it...52nd in line! Confused? Here's the full line of succession to the British throne. 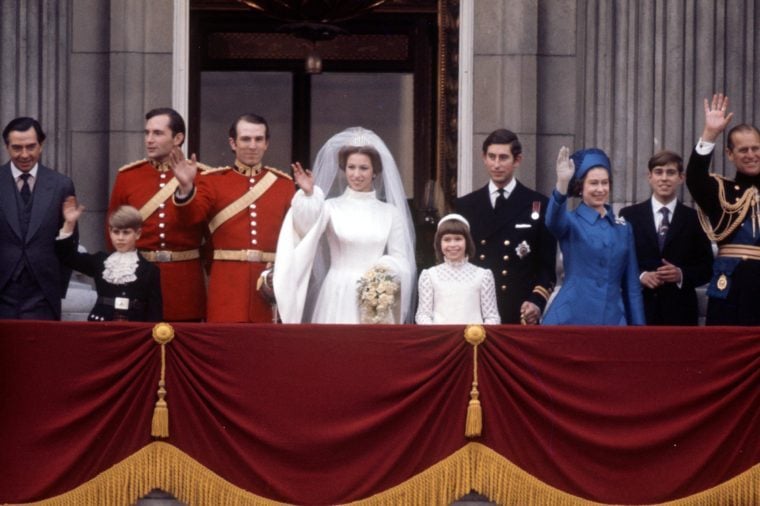 Queen Elizabeth II's only daughter was also the first of her children to marry. Princess Anne had a fondness for horses, which led her to find love with Mark Phillips, an Olympic gold medalist in equestrian events. The date of their marriage, November 14, 1973, was declared a "bank holiday," or a public holiday in the United Kingdom. Approximately 500 million people across the world viewed the ceremony, which took place at Westminster Abbey. 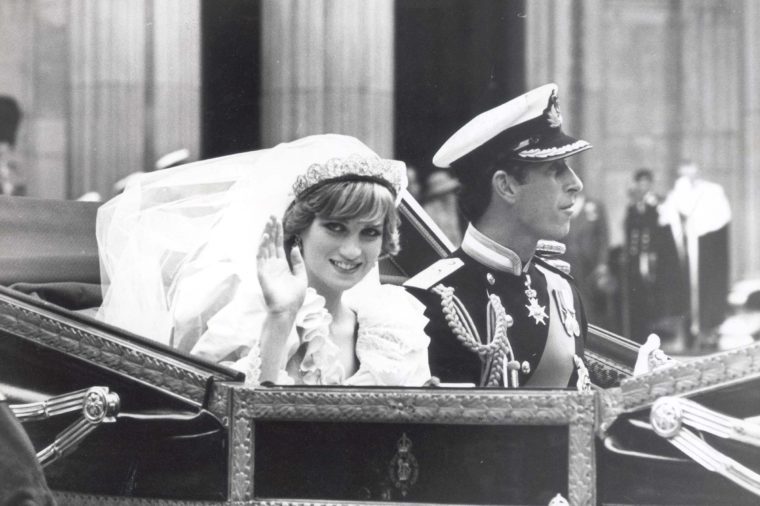 Queen Elizabeth II's oldest child, Prince Charles, tied the knot with Lady Diana Spencer, who would become known as "the People's Princess," on July 29, 1981. The ceremony was actually not at Westminster Abbey; it took place at St. Paul's Cathedral in London. This massive church had more room for spectators than Westminster Abbey, and its location also allowed for a longer post-wedding procession. An audience of 750 million people around the world tuned in to watch. Princess Diana chose to omit the word "obey" from her wedding vows, and Kate Middleton would do the same, 30 years later. Here are 10 more royal wedding photos from Diana and Charles' nuptials.

Rumor has it that Princess Diana had a hand in setting her brother-in-law, Prince Andrew, up with Sarah Ferguson. Ferguson was the daughter of Prince Philip's (Andrew's father's) polo manager. Their wedding took place on July 23, 1986, at Westminster Abbey, and the bride wore a dress of ivory duchesse satin. The pair divorced ten years later, but are reportedly still close, and Ferguson attended Prince Harry and Meghan Markle's wedding in May 2018. 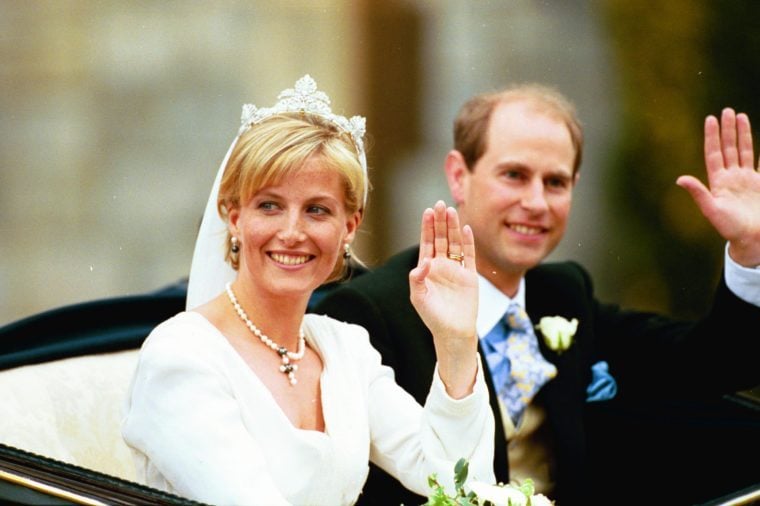 Queen Elizabeth II's youngest child, Prince Edward, married in 1999. On June 19 of that year, he wed Sophie Rhys-Jones, whom he met when she was working in the press and promotions department at Capital Radio. The pair married at St. George's Chapel in Windsor Castle. They made it clear that they didn't want their wedding to be an enormous state occasion, and, to that end, no politicians outside of the family's inner circle were invited. They also didn't have any military involvement, and even requested that their guests not wear hats. (It wasn't that small a ceremony, though; they still had over 500 guests.) For more royal wedding photos, get a look at these funny royal wedding moments that were caught on camera. 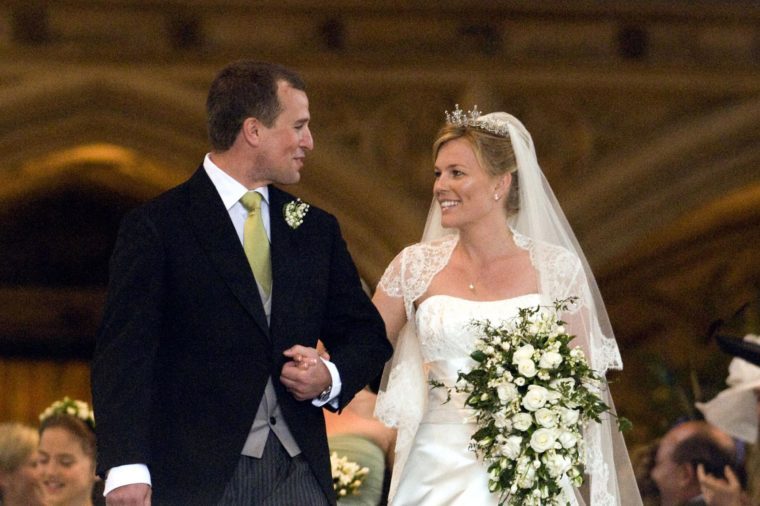 Princess Anne's son and Queen Elizabeth II's grandson, Peter Phillips, met his bride, a management consultant named Autumn Kelly, at the Canadian Grand Prix. The ceremony took place on May 17, 2008, at St. George's Chapel. Peter's parents, Princess Anne and Mark Phillips, declined to give him royal titles, and he carried on that tradition with his own children, Savannah and Isla, Queen Elizabeth II's first great-grandchildren. 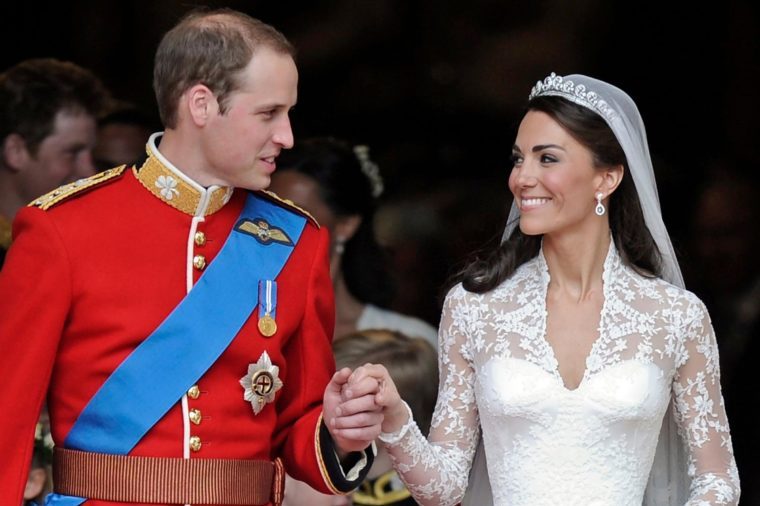 This fairytale wedding was a royal spectacle for the ages and had the gorgeous royal wedding photos to prove it. Prince Charles' eldest son, William, and Catherine Middleton, whom he met at the University of St. Andrews, got married on April 29, 2011. From the breathtaking satin dress with its touching tribute to the United Kingdom to the couple's first kiss on the Buckingham Palace balcony, this ceremony was a royal fanatic's dream. Learn the touching history behind Kate Middleton's engagement ring. 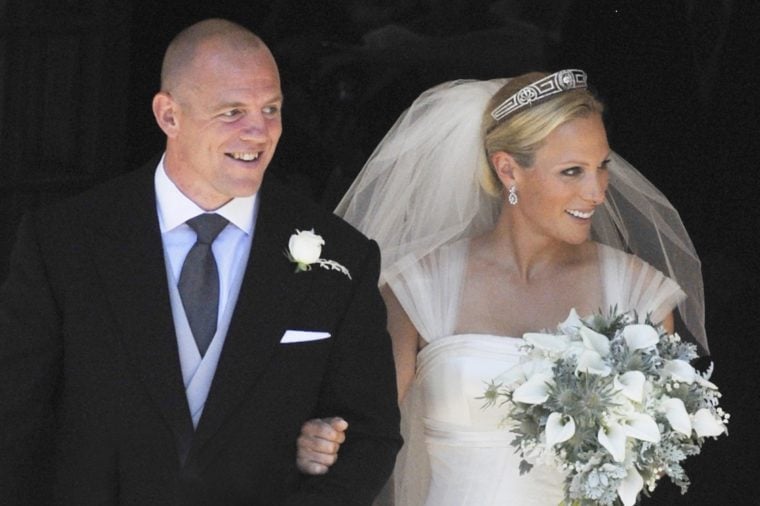 Yes, there was another royal wedding in 2011! Three months after Will and Kate's nuptials, on July 30, Princess Anne's daughter Zara Phillips tied the knot as well. An equestrian, Zara married another athlete, rugby player Mike Tindall. Their wedding took place in Scotland at the Kirk of the Canongate in Edinburgh. They have a four-year-old daughter Mia, and welcomed their second child, Lena, in June 2018. 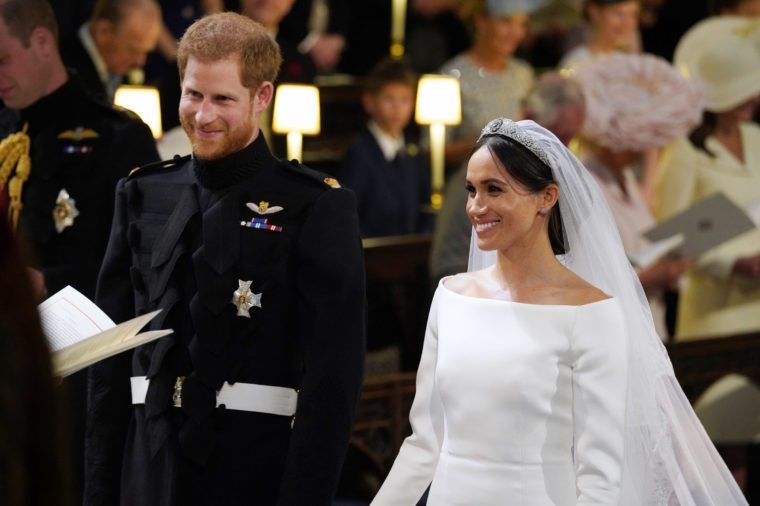 Prince William's younger brother tied the knot with American actress Meghan Markle on May 19, 2018. Markle's American heritage was just one of the ways this royal wedding was historically significant; everything from the date to the guests marked a departure from established royal tradition. During this historic ceremony, which took place at St. George's Chapel in Windsor Castle, Markle walked down the first part of the aisle by herself, the first royal bride to do so. Prince Charles—her groom's father, not hers—escorted her to the altar. Here are all the ways Harry and Meghan's wedding made history. 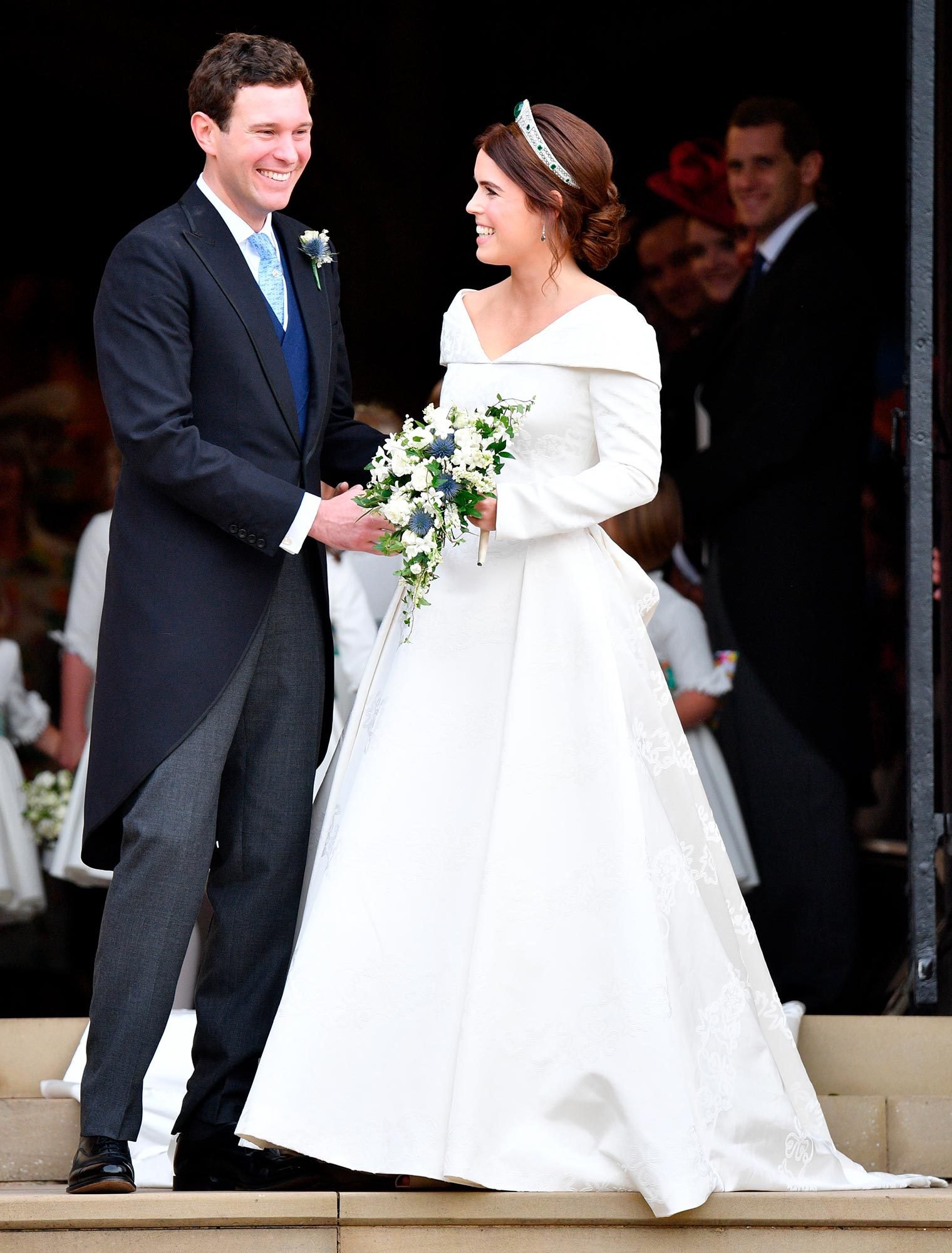 The younger daughter of Prince Andrew and Sarah Ferguson married her seven-year sweetheart Jack Brooksbank in Saint George's Chapel on October 12, 2018. Eugenie actually arrived at her royal ceremony in the same car as Kate Middleton—a 1977 Rolls Royce Phantom VI belonging to the Queen herself! And that wasn't the only thing she borrowed from her grandmother; she wore a tiara belonging to Queen Elizabeth in lieu of a veil. Read on for more fascinating facts you never knew about past royal weddings.