This Is the Only U.S. State With a Real Royal Palace 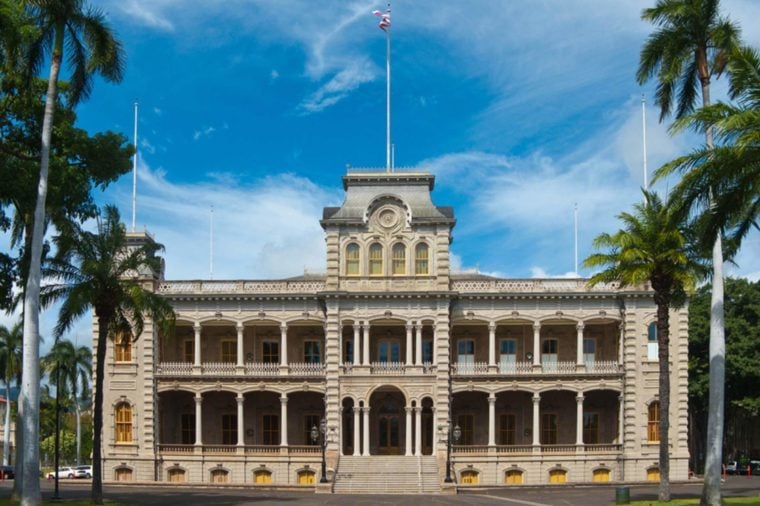 vasen/ShutterstockWhen you think of historic American landmarks, a royal palace is probably the last thing you think of—after all, the United States earned its name escaping the British monarchy. Even with the country’s democratic ideals, though, one state is home to the residence of one former royal family.

No, King George III didn’t build a castle to spend time with the colonists before the American Revolution. Back in 1882, the U.S. only had 38 states. North and South Dakota, Montana, and Washington wouldn’t join the union for another seven years, but there was another notable state missing, too: Hawaii. (Don’t miss these other astonishing facts you never knew about all 50 states.)

By the 1800s, the eight Hawaiian Islands were united under one monarchy. In 1882, King Kalakaua built ‘Iolani Palace in Honolulu for him and his wife, Queen Kapi‘olani. European palaces were the inspiration for the “American Florentine” style, which was a cross between Italian Renaissance architecture and native Hawaiian styles.

The king’s younger sister, Queen Lili’uokalani, stayed in ‘Iolani Palace when she took the throne in 1891 until she was overthrown by an American military-backed coup in 1893. She would come back only in 1895, when she spent a year in house arrest after being found guilty of trying to restore the monarchy. From then on, it was used as the government headquarters for its series of political systems, including as state capitol after it joined the U.S. in 1959—just before the American flag designed by a teenager became the official flag.

By the 1960s, the castle started to fall into disrepair, and Hawaii’s capitol moved out of ‘Iolani Palace and into a new building. Now the building’s first two floors have been restored and are open for tours under a non-profit organization. For more American trivia, see if you can guess the only letter that isn’t in any U.S. state name.

12 Titanic Survivors: What Happened to Them Next

The 20 Best Easter Movies to Watch This Year