With President Obama and Mitt Romney scheduled to square off in the first Presidential debate on Wednesday, it’s time to 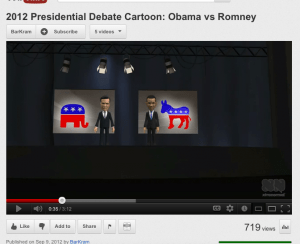 With President Obama and Mitt Romney scheduled to square off in the first Presidential debate on Wednesday, it’s time to get serious. Or not. Or maybe we’ll get serious after we have some fun. Yes, that’s it. Fun first, then serious.

Okay, so here’s an animated video that captures perfectly the essential dynamic of the modern political debate. I love the fact that it’s presented by “the League of Short Attention Span Voters.”

Of course, there’s a lot more going on in these debates than just a couple of smart guys disagreeing about everything. In “Five Things to Watch in the Presidential Debate,” Andy Sullivan of Reuters neatly sums up the candidates’ different goals and strategies for Wednesday’s clash. The gist: Romney’s under pressure to deliver a powerful performance that will help him escape the shadow of recent missteps; Obama, running ahead in key polls, has to avoid big mistakes.

For a deeper dive into the meaning and impact of it all, check out this smart piece from Washington Monthly, in which George Washington University political scientist John Sides asks (and answers) the big question:”Do Presidential Debates Really Matter?”