Desirée Mieir has four children under the age of ten, including a set of eight-year-old twins, and a husband in the Navy who has been deployed for seven months. She knew life as a military spouse would have challenges, but she never imagined that the biggest one would be feeding her kids.

“Today was not a good sale day,” Desirée says as she and the kids leave their local San Diego supermarket. When you’re on a tight budget, she adds, “you kind of have to get creative. Some days we go to a food pantry.”

That’s right: To put food on the table, the Mieirs, along with thousands of other military families around the country, rely on the kindness of strangers.

At Dewey Elementary School, a truck full of fruits and vegetables arrives every two weeks, courtesy of a hunger-relief organization called Feeding San Diego, a member of Feeding America. A team of volunteers quickly sets up a distribution line in the gym where families—­military folks, the newly unemployed, the homeless—will pick through non­perishable items such as beans, rice, and flour along with the fresh produce, all of which are free to those in need.

“I knew we wouldn’t be wealthy,” Desirée says about life in the military. “But I thought it would be a lot more manageable. I didn’t know I’d have to try this hard.”

Her one solace: She’s not alone. “I wouldn’t say we’re check-to-check, but pretty darn close,” says Melissa Carlisle, whose husband, like ­Desirée’s, serves in the Navy. “If a tire blows, that’s it. We don’t have much in the bank. People have this illusion that we [in the military] are rolling in dough, but we’re not. We’re just really good with the little bit of money that we get.”

Data from the 2017 annual Census Bureau survey shows that 16,000 active-duty service members received food stamps that year. But that number doesn’t include the thousands of military families around the country who are not eligible for food stamps because they make too much money to qualify and yet routinely rely on charities or loans from family to get by. In fact, a survey from Blue Star Families, a military-spouse support group, says 13 percent of military families report trouble making ends meet, compared with 7 percent of civilians.

Their struggles are caused by a variety of factors: the high cost of living in cities such as San Diego, difficulty qualifying for federal food assistance, and a transient life—moving from base to base—that makes it challenging for spouses to build careers when they don’t know when and where their families will be transferred next. Desirée Mieir was a phlebotomist back home in Oklahoma. But once her husband, Dan Mieir, was stationed in San Diego, they estimated they would pay more in childcare than they’d make if Desirée joined the workforce.

That lack of a second income is a big hit for the Mieirs. As a communications officer in the Navy, Dan makes $34,279 a year before taxes. That’s just under the national poverty level for a family of six. The military does pay for their housing, but the housing allowance is treated as income, and that additional “money” is often enough to make a family ineligible for federal food assistance known as the Supplemental Nutrition Assistance Program (SNAP), as is the case with the Mieirs.

Enlisted service members do receive a food allowance, about $373 per month, but that sum is intended for the member alone, not his or her family, and it does not increase if one has dependents.

At Dewey Elementary School, which the Mieirs’ three eldest children attend, Principal Tanya McMillin sees food insecurity on the students’ faces every day. “We are 80 percent military and 70 percent free and reduced lunch,” she says. “So, essentially, members of our military are paid so poorly they qualify for free lunch and breakfast.” As a result, she has students with parents on the front line who go to bed hungry sometimes. “It’s shocking.”

Vince Hall, the CEO of Feeding San Diego, says that much of the problem is geographic. “Many of these families are the hardest-working people I’ve ever met,” he says. “They’re focused on skipping meals so that their kids have something to eat. I take great pride in the work that we do here, but I take no pride in the fact that our country stations families in San Diego and doesn’t pay them enough money to live in San Diego.”

But it’s not just San Diego. Records from the Department of Defense reveal that during the 2018–2019 school year, a third of children at DOD-run schools on military bases in the United States—more than 6,500 ­children—were eligible for free or reduced lunches. At Georgia’s Fort Stewart, over 65 percent were eligible. Mazon, a group that combats hunger, has found that there are food pantries on or near every military base in this country.

“There’s nothing wrong with going to a food pantry when you need emergency help,” says Josh Protas, Mazon’s vice president of public policy. “But there’s no reason that those who are serving in the armed forces should have to do that on a routine basis.”

For its part, the DOD sees the problem of food insecurity in the military as being minimal. Troops are well paid, they insist; there’s a subsidized grocery store on each base; and families can avail themselves of the ­financial-literacy training the military provides.

Desirée Mieir did seek financial help from the military. She says it didn’t help. “My husband and I have taken advantage of resources available to us,” she says. “We’ve met with financial counselors provided by the military. We have done that work.” And yet she and her husband still barely scrape by.

Former Navy fire controlman Crystal Ellison left food insecurity behind only when she left the service. For most of the 13 years she spent managing complex weapons systems and high-powered radars, she had to rely on loans from her in-laws to feed her family.

“I found it embarrassing,” she admits. “I felt like, you should be able to provide for your family and not lean on anybody else. That’s what you’re supposed to do as an adult.” It was especially difficult when she was a junior sailor and the pay was lower. “If you didn’t have enough money saved up, you were definitely in the hurt locker.”

Ellison is now in the private sector and no longer struggling financially, but she wishes more Americans knew that food insecurity among the lower enlisted ranks of the military is a problem. “We’re giving 100 percent to the country, and the country doesn’t give it back.”

On the morning of May 20, the USS Stockdale, a guided-missile destroyer, slowly docks at Naval Base San Diego. Jubilant sailors disembark. One of them is Dan Mieir. Among the throng of loved ones waiting is ­Desirée, wiping away tears of joy, anxiety, and excitement. She’s wearing a ­flaming-red sleeveless dress and holding a sign that reads, “Hey Sailor, after 212 days, this Missus Needs Kisses.”

Later that day, Dan sneaks into his twins’ classroom at Dewey Elementary. The second they spot their ­father, they leap up from their desks, run past their schoolmates, and jump into his open arms, ­shrieking, ­“Daddy’s home!” Two beautiful words, which, for today, push away all the worries. 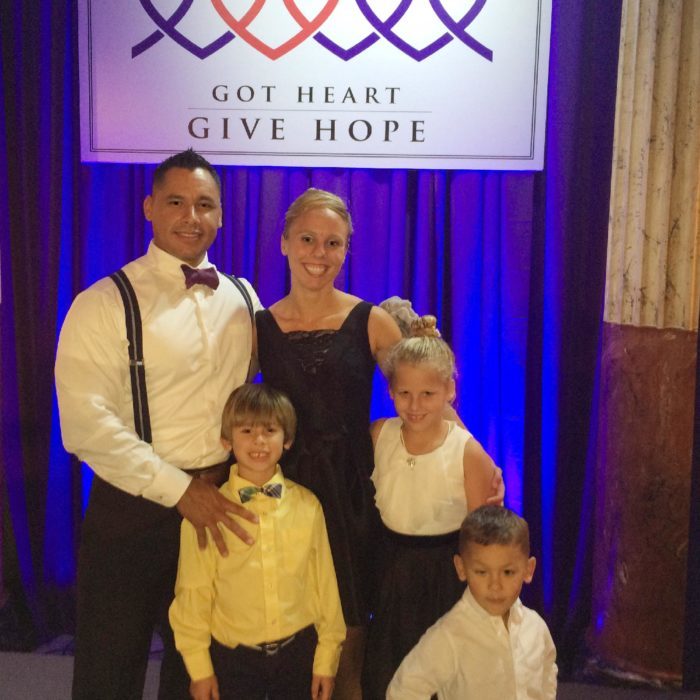 Triumphs and Tragedies Only Military Families Will Understand 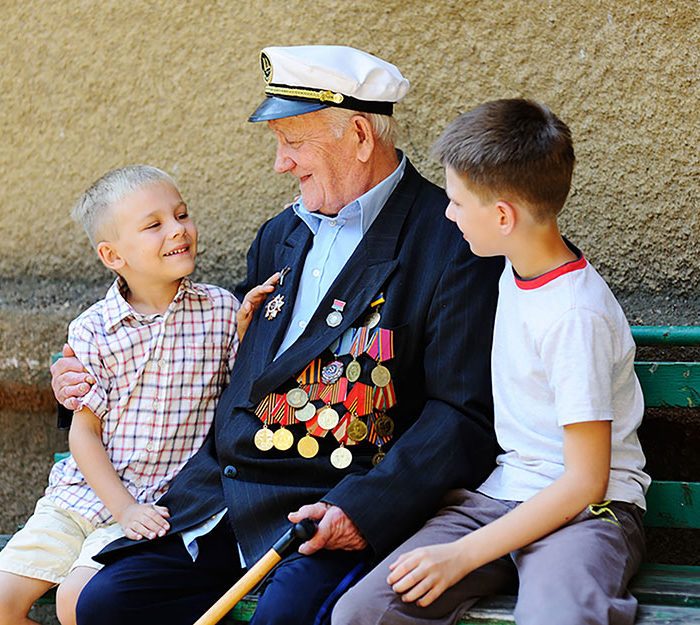 Simple but Powerful Ways You Can Support Vets 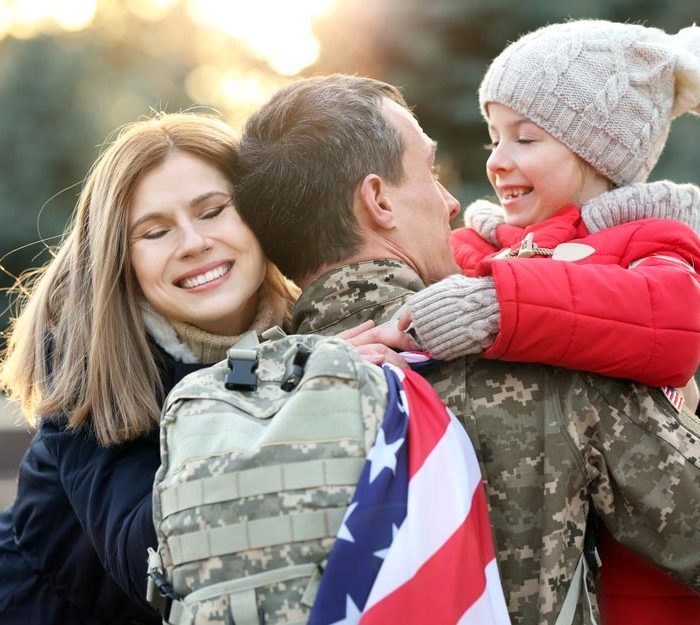 America's Troops Speak Out: Things They Wish You Knew