The 12 Most Expensive Barbie Dolls Ever Made

It's Barbie's world, we just live in it. 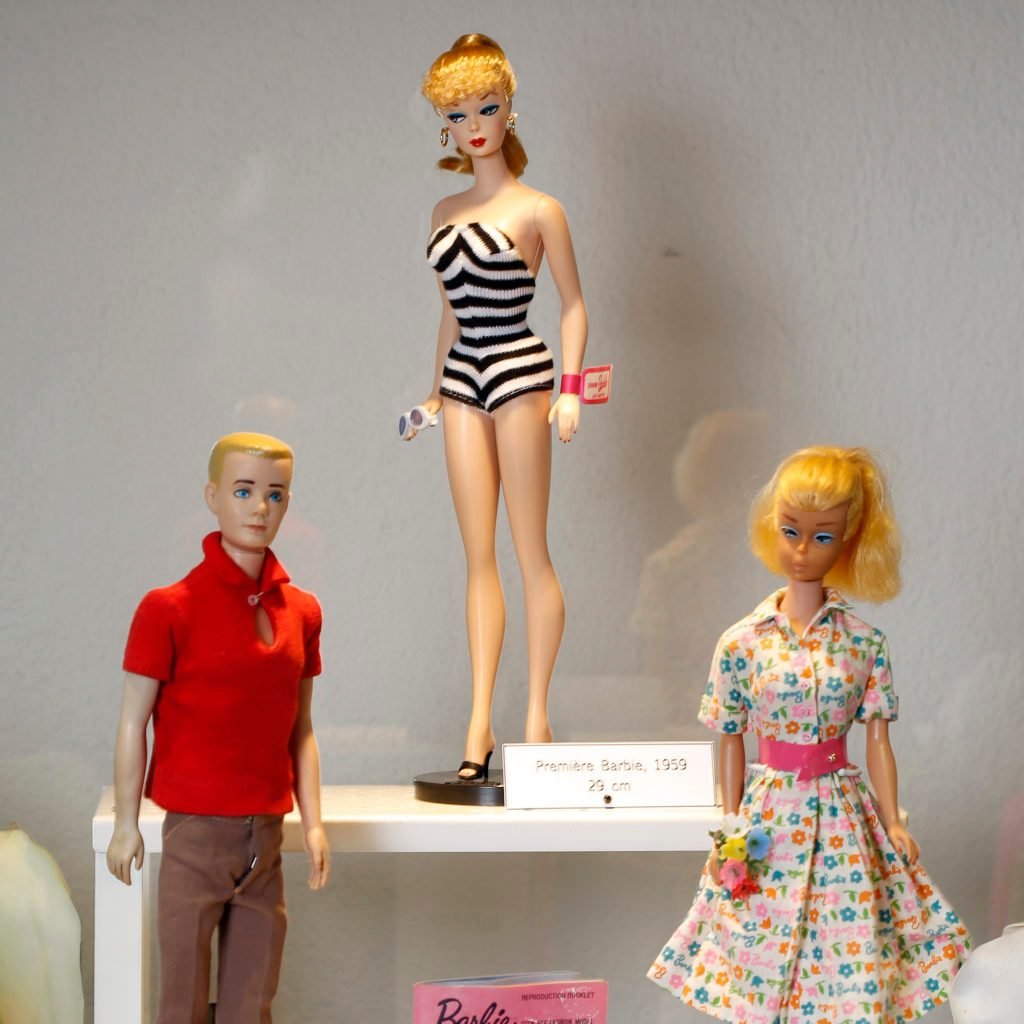 When the Barbie doll was introduced in 1959, the blonde beauty became an instant icon. While she has undergone many changes (physical, career, and otherwise) over the past several decades, fans continue to clamor for what's new and next for Barbie, not to mention collect some classic vintage iterations. According to Mattel, the company behind all things Barbie, collecting the dolls really hit a high note during the 1990s, which they note is likely thanks to the introduction of bidding sites like eBay. But to their credit, the company also upped its partnership game around this time, debuting the Bob Mackie Gold Barbie, whose impressive ensemble shimmered with 5,000 hand-sewn golden sequin accents. That's not the only doll to garner attention for its expensive taste, these Barbie dolls cost a lot of moola when they were introduced as well. Speaking of big bucks, find out 13 of the quirkiest items that sold for millions at auction. 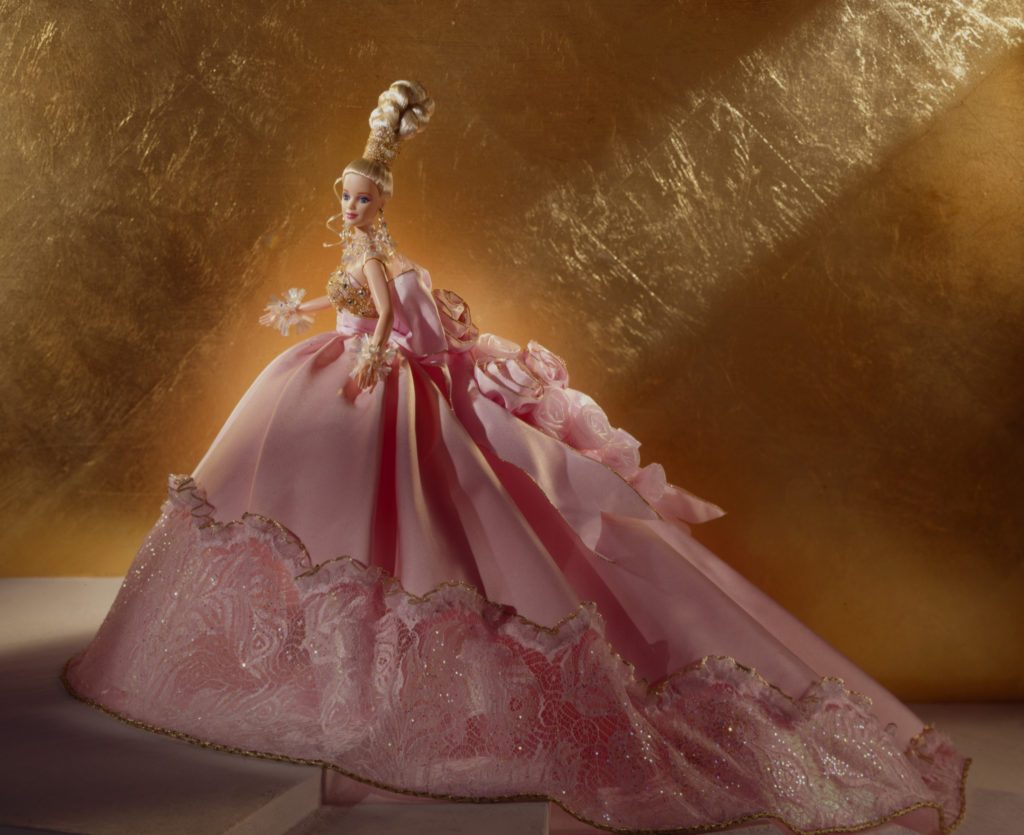 Pink Splendor Barbie made her dazzling debut in 1996 as a Limited Edition, with only 10,000 pieces manufactured for purchase across the globe. Her pale pink gown is actually constructed from fine silk satin, accented by glittering lace. But the attention to detail doesn't stop there: There are rhinestones, a bodice crafted with gold lace and pink taffeta (of course), not to mention crystal jewelry and seriously intricate accessories like pink silk undies and matching garters. When she was unveiled, Pink Splendor Barbie was originally priced at $900—today collectors will spend upwards of $250 on bidding sites to finally snag a coveted version of the doll. Find out which other vintage Barbie dolls are worth a fortune today. 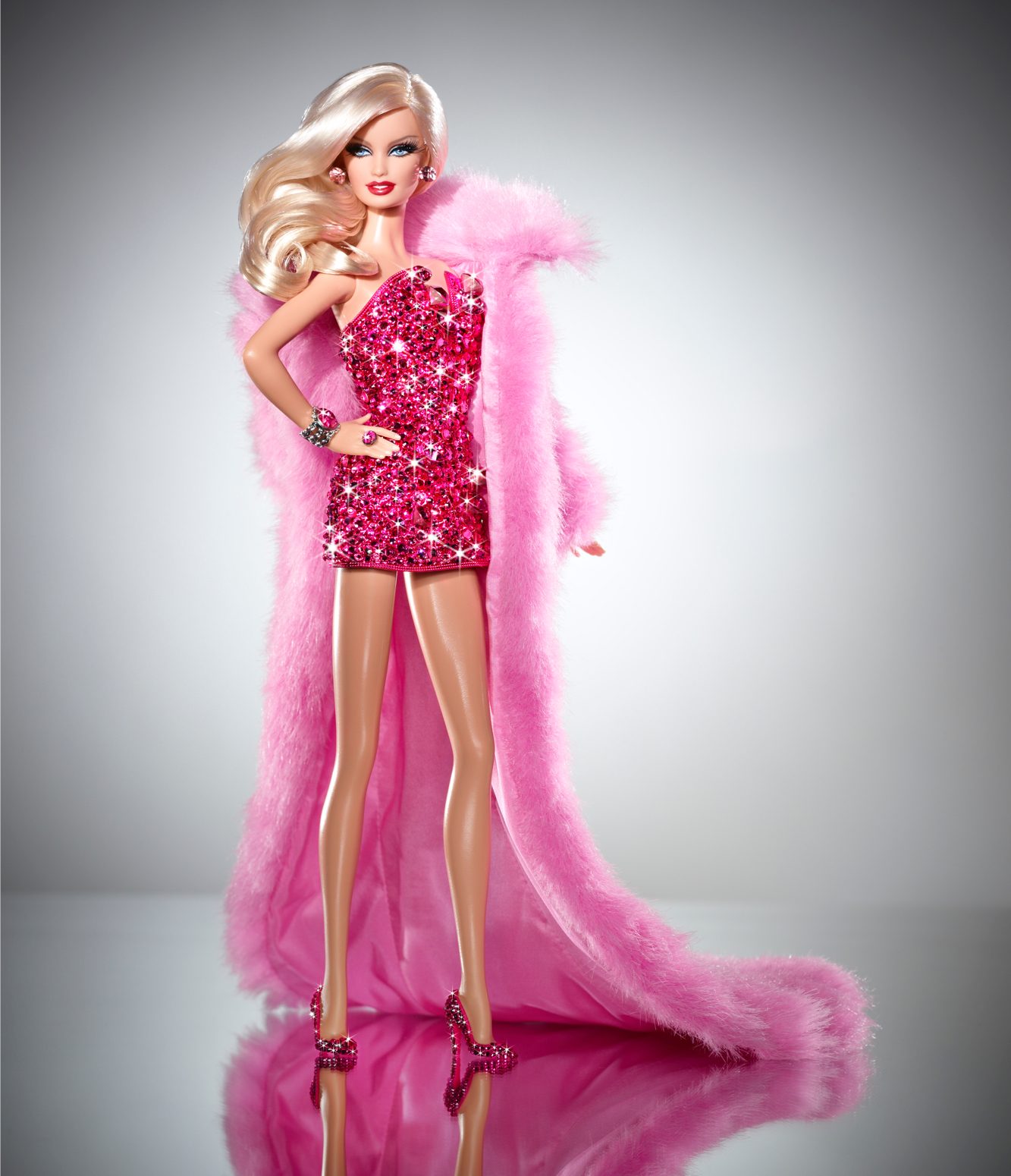 The year was 2012. The collaborators were David and Phillipe Blond (better known to style mavens as The Blonds). The doll? Pink Diamond Barbie. Wearing a rose and fuchsia diamond-studded mini dress that was handmade by the design duo themselves, Pink Diamond Barbie made her most amazing debut ever during The Blonds' Spring 2013 show at New York Fashion Week. It's estimated that the opulent Barbie was worth $15,000. But don't worry, all of the proceeds went to a good cause. Pink Diamond Barbie was auctioned off and the money raised went to the MAC Aids Fund. Because not everyone can afford such an expensive Barbie, ABC News Radio reported that a $125 version of this particular variation was, at one point, available on BarbieCollector.com. Unlike this Barbie, these 12 iconic things failed to sell at auction. 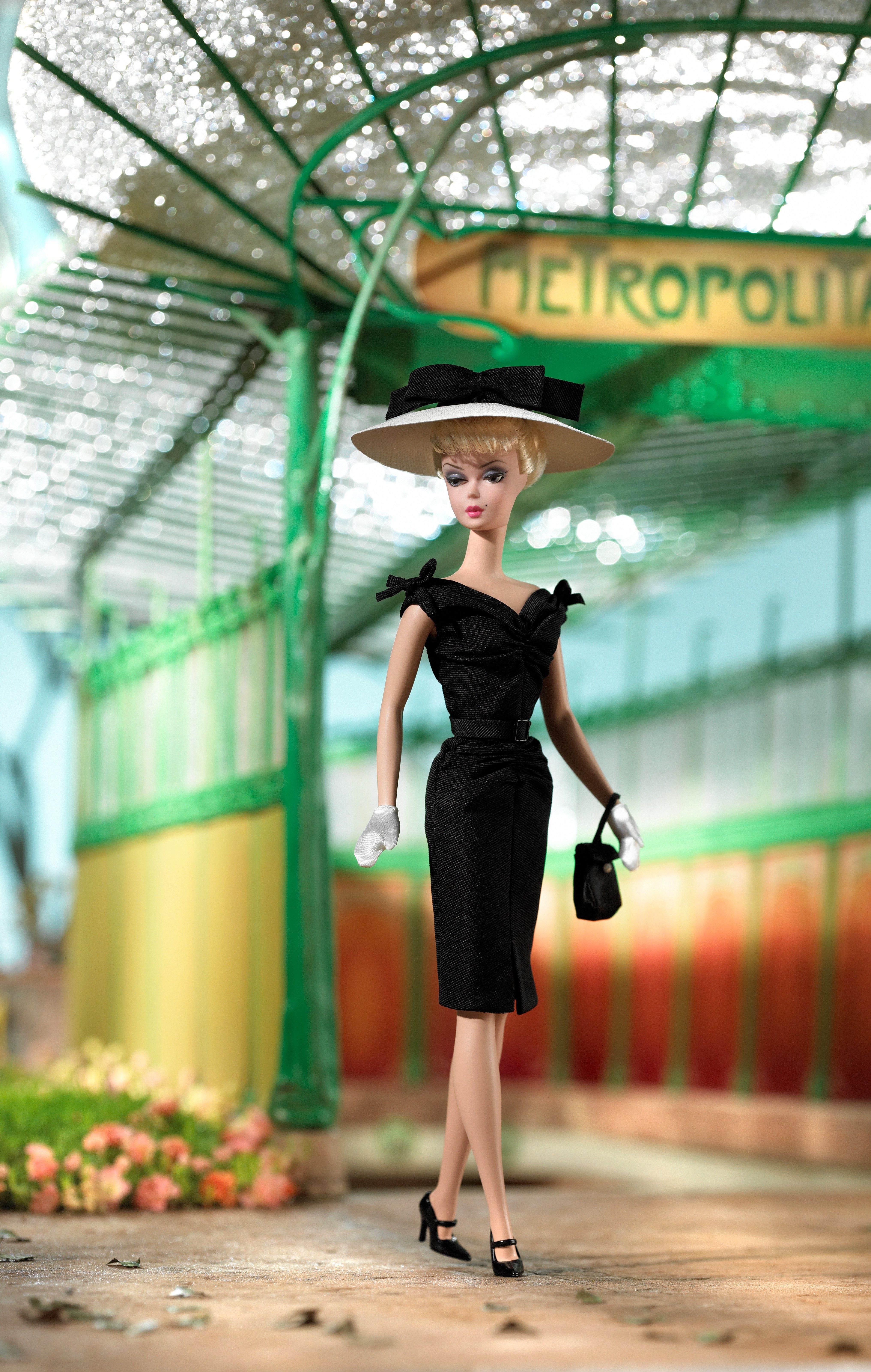 Though she was released in 2003, City Smart Barbie looks like a throwback to the doll's early days, with a 1950s vibe about her. She dons a black shantung sheath dress with matching accessories that have a flair for the dramatic. A wide-brimmed black-and-white hat, not to mention white gloves, chic black purse, and black heel complete the sophisticated look. Created by fashion designer and Mattel illustrator Robert Best, she resides among the Barbie Fashion Model Collection and is considered a doll for the adult collector. Peruse eBay for City Smart Barbie and you'll find bids in the range of $1,000 or more. This is what Barbie looked like the year you were born. 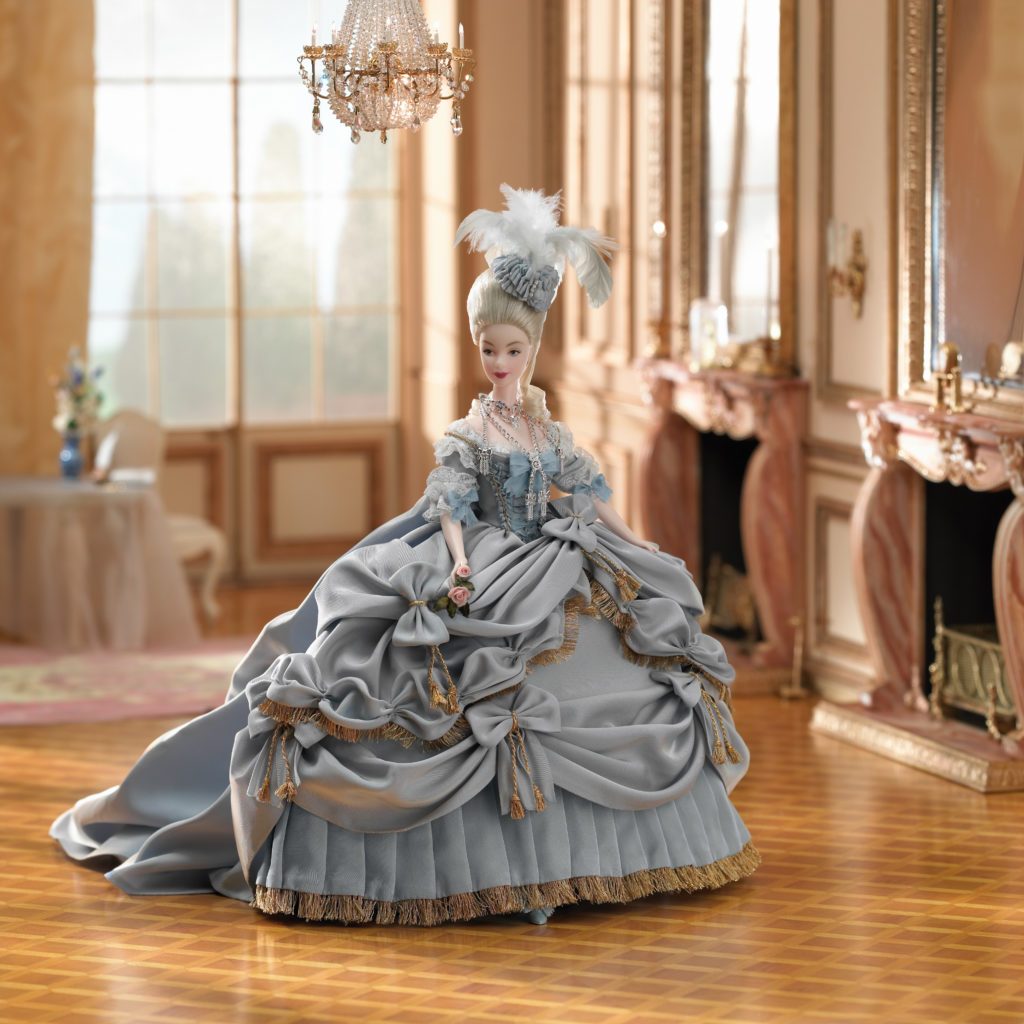 Just as ostentatious as the former Queen of France herself, the Marie Antoinette Barbie is a sight to behold. She clutches handcrafted porcelain roses and wears a stunning blue gown with embellished bodice. The dress is layers upon layers of fabric and tassels, and beneath are full-length pantaloons, according to Mattel. Marie Antoinette Barbie also accessorizes with a plumed hat and rhinestone necklace. Released as a limited edition doll within the Women of Royalty Series in 2003, you'll spend a pretty penny to get your hands on one of these Barbies today. We found one on Amazon for the steep price of $5,000. You could be sitting on a gold mine if you have one of these 25 things collecting dust in your attic. 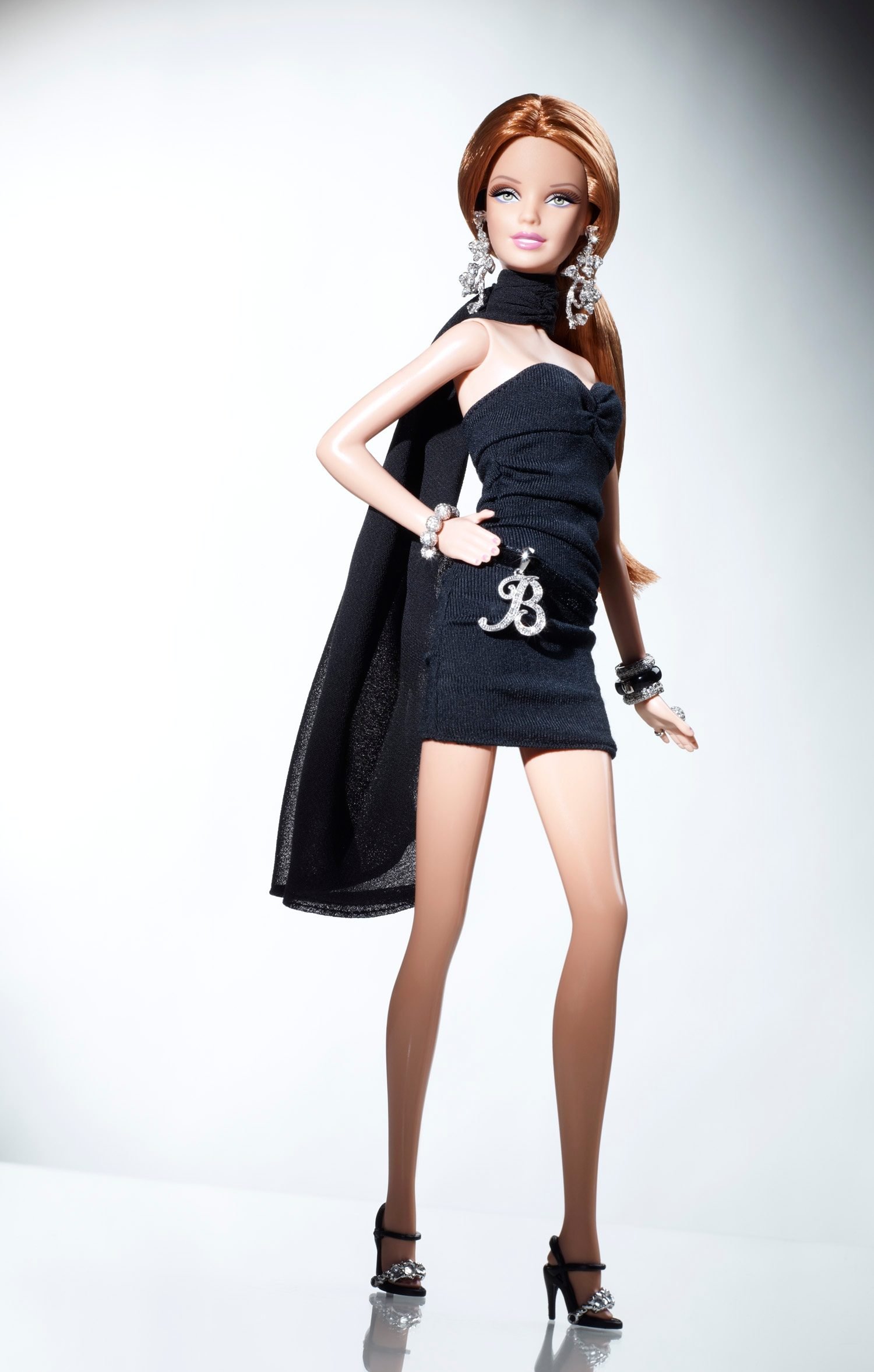 If you thought Marie Antoinette and City Smart Barbies carried a hefty price tag these days, brace yourself for the Lorraine Schwartz Barbie. With flowing red hair. the designer's take on Barbie exudes all of the glamour for which Schwartz, who designs A-list celebrities like Beyonce, is known. In fact, you'll even find a small diamond "B" on the waist of this doll. And those are real diamonds, folks. The Lorraine Schwartz Barbie was auctioned off for a whopping $7,500, according to MoneyInc.com. That's a lot of coin for a collector's item. Check out these childhood collections that could actually make you rich. 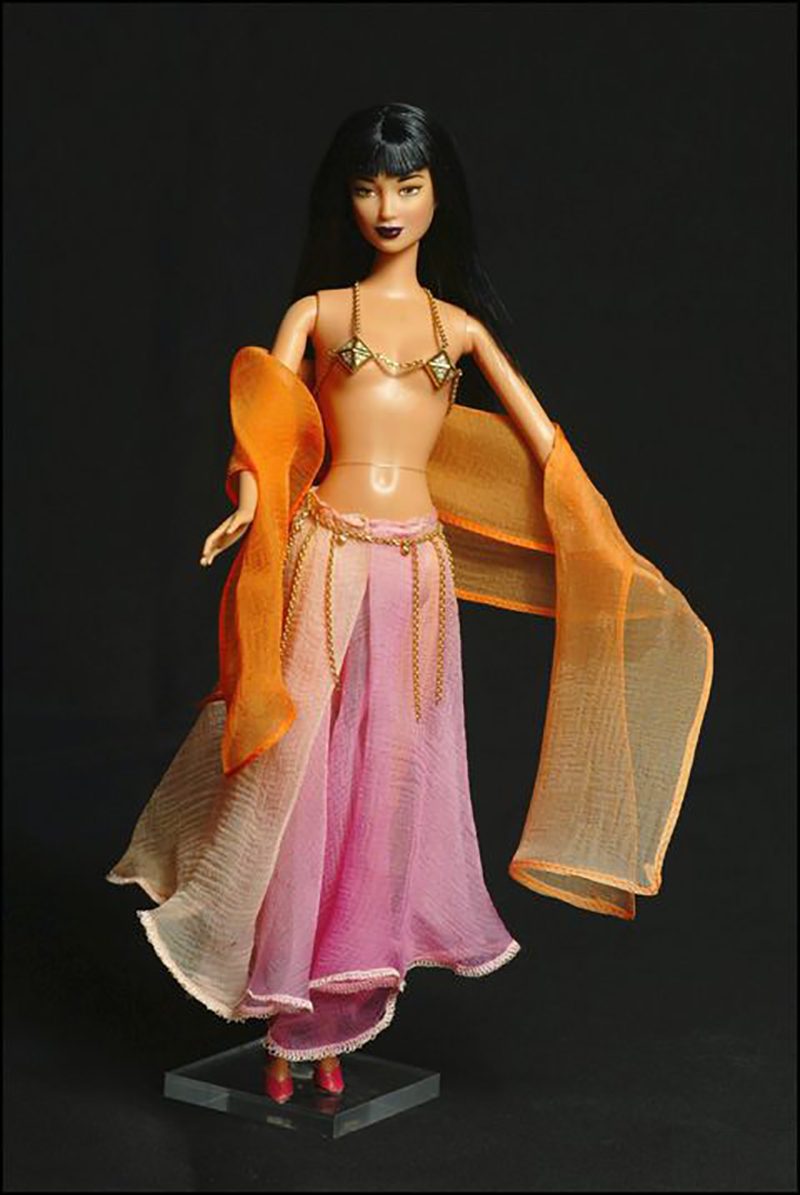 Luxury jewelers De Beers couldn't let Barbie's 40th birthday go by without doing something big, so they dressed her up in something seriously stunning. Wearing an ensemble outfitted with 160 diamonds, the look features a jeweled bikini top, skirt, and belt. Given the intricacies of her clothing alone, it isn't surprising that the over-the-top doll brought in $85,000 at auction, according to The Christian Science Monitor. Find out how much Barbie's DreamHouse would cost in real life. 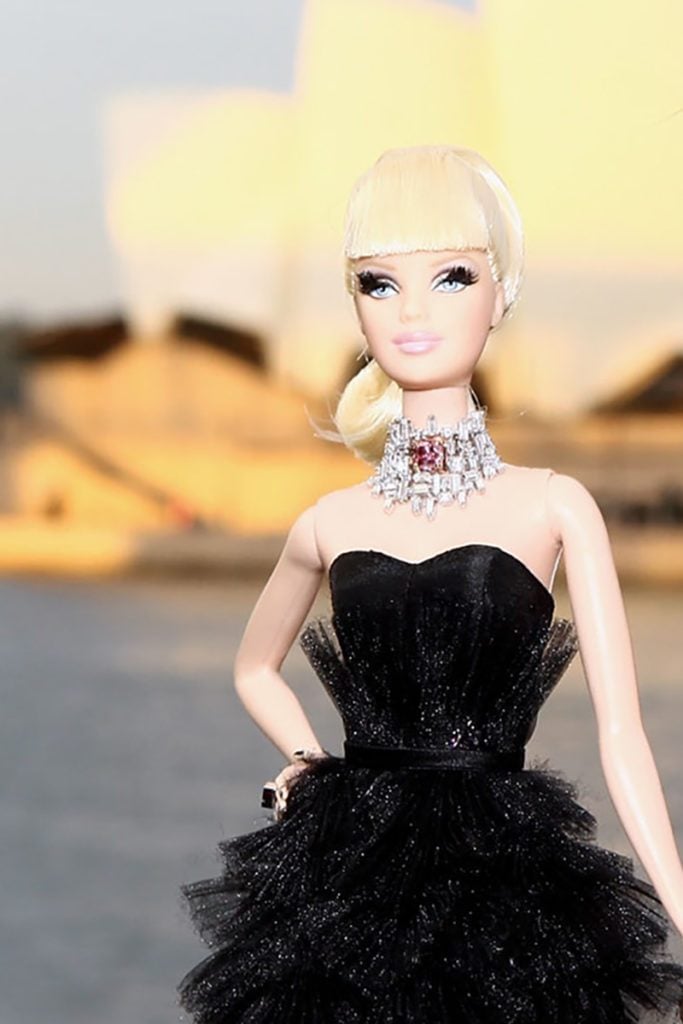 Australian jeweler Stefano Canturi didn't take his collaboration with Barbie lightly and it shows in the final product. He spent six months working on the design. "She didn't complain, she always was ready for me...fitting her with this beautiful necklace," Canturi told New York Public Radio. "I even had to poke her a few times with a sharp object and she did not complain one bit. Love her, she's gorgeous!" Canturi's design boasts a necklace featuring a pink diamond that costs—wait for it—$300,000. The Barbie was auctioned at Christie's in 2010 and brought in $250,000, which was donated to the Breast Cancer Research Foundation. It hasn't been all smooth sailing for the brand. Remember these Barbie controversies from the past? 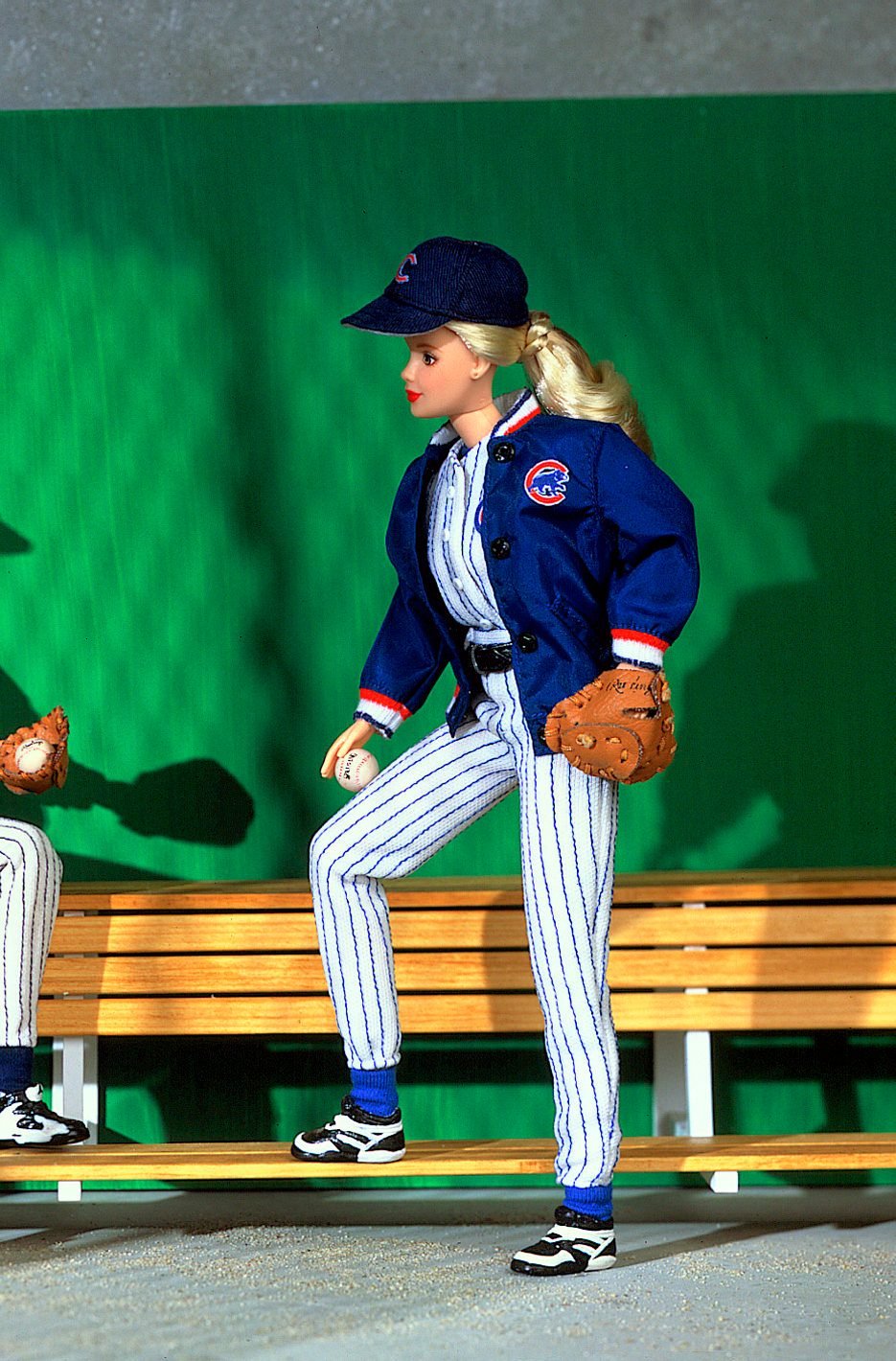 Proving that Barbie can do anything, including playing ball (literally), Mattel teamed up (see what we did there?) with Major League Baseball to introduce Chicago Cubs Barbie in 1999. With her hair pulled back in a chic covered ponytail, this doll pretty much screams, "Put me in, coach!" while sporting an authentic jersey bodysuit, pants, dugout jacket, and cleats. And, yes, she has a signature Cubs baseball cap as well. Although there are other dolls in the Barbie Loves Sports collection, none garnered the same kind of attention as vintage style Barbie paying homage to the Cubs. According to The Gamer, if you have one of these beauties, which was an exclusive giveaway at a July 1999 game between the Cubs and the Kansas City Royals, you could score $2,000 for it, if it's in the original packaging. 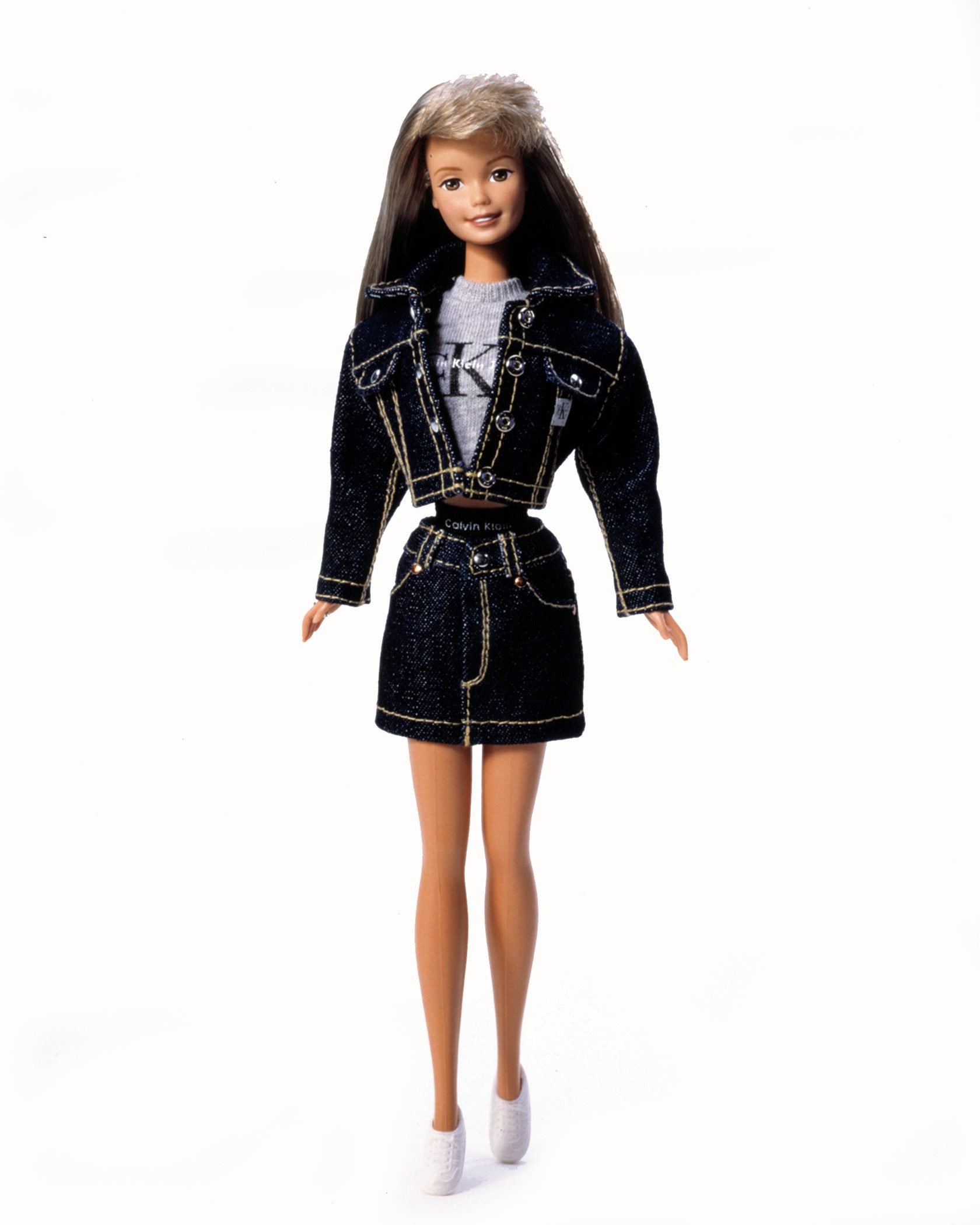 When Calvin Klein Barbie made her debut in 1996, she was kind of a big deal. This shouldn't come as a huge shock to anyone familiar with the 90s because the designer, along with his popular unisex fragrances like CK One, were all the rage. Decked out in head-to-toe Calvin, Barbie sports a denim mini and grey crop top with a denim jacket. Heck, even her unmentionables have the Calvin Klein logo. The label-loving gal rocks some two-toned hair and feathered bangs, proving she's a lady of the era. Today you can find this particular gal on Etsy in the neighborhood of a grand. Take a walk down memory lane with these 25 craziest toy fads in history. 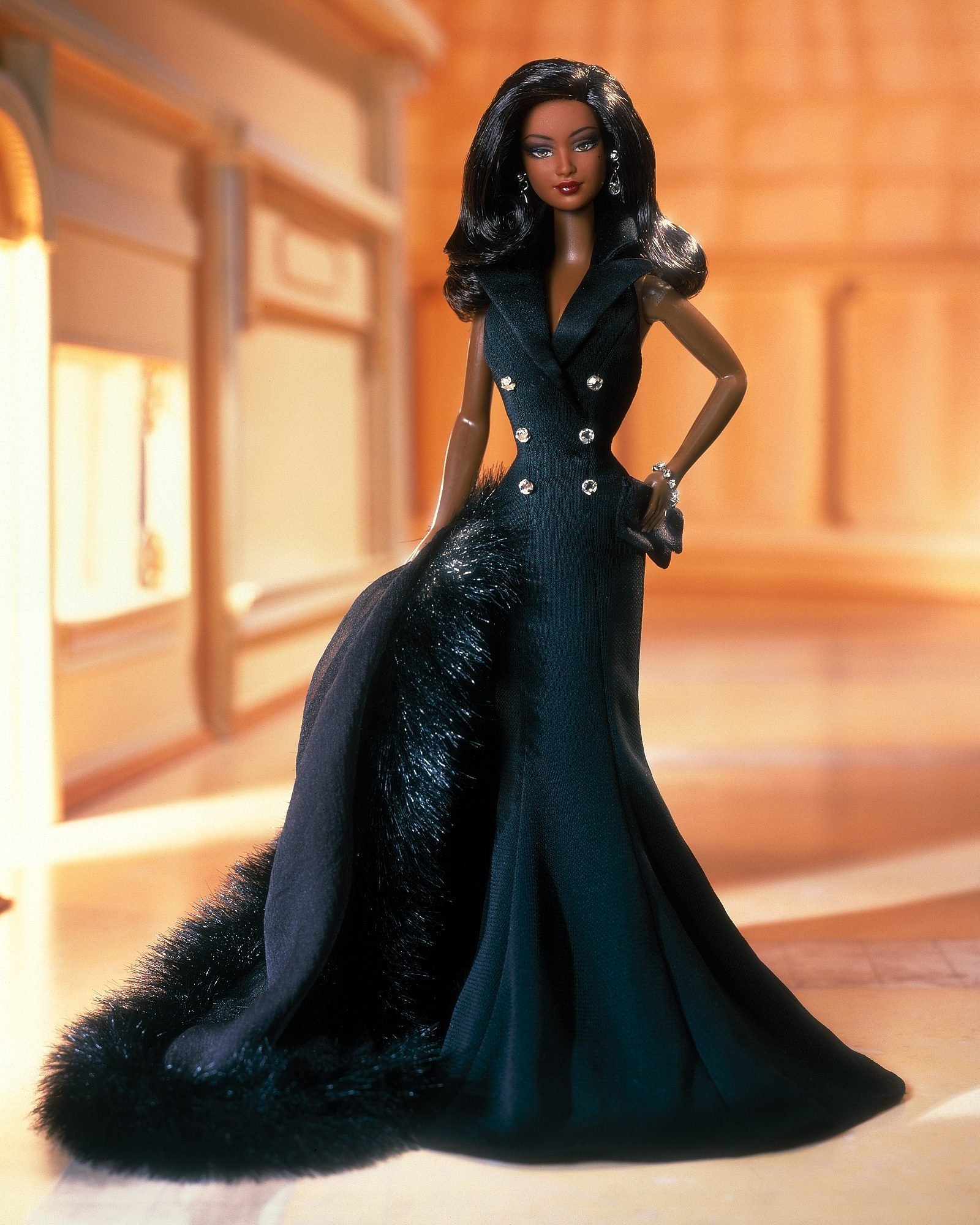 A limited-edition doll for the Barbie Collector Club Exclusives line, Midnight Tuxedo Barbie is the epitome of style and sophistication. Enchanting collectors since her introduction in 2001 (on New Year's Day, no less), this Barbie dons a sleeveless gown adorned with satin-like lapels and silver buttons. Perfectly coiffed and accessorized by the perfect evening clutch, this is one Barbie you definitely want to keep away from a child's hands. Walmart has the doll listed as out of stock, but retailing for $99.99. However online auctions list it upwards of $900. 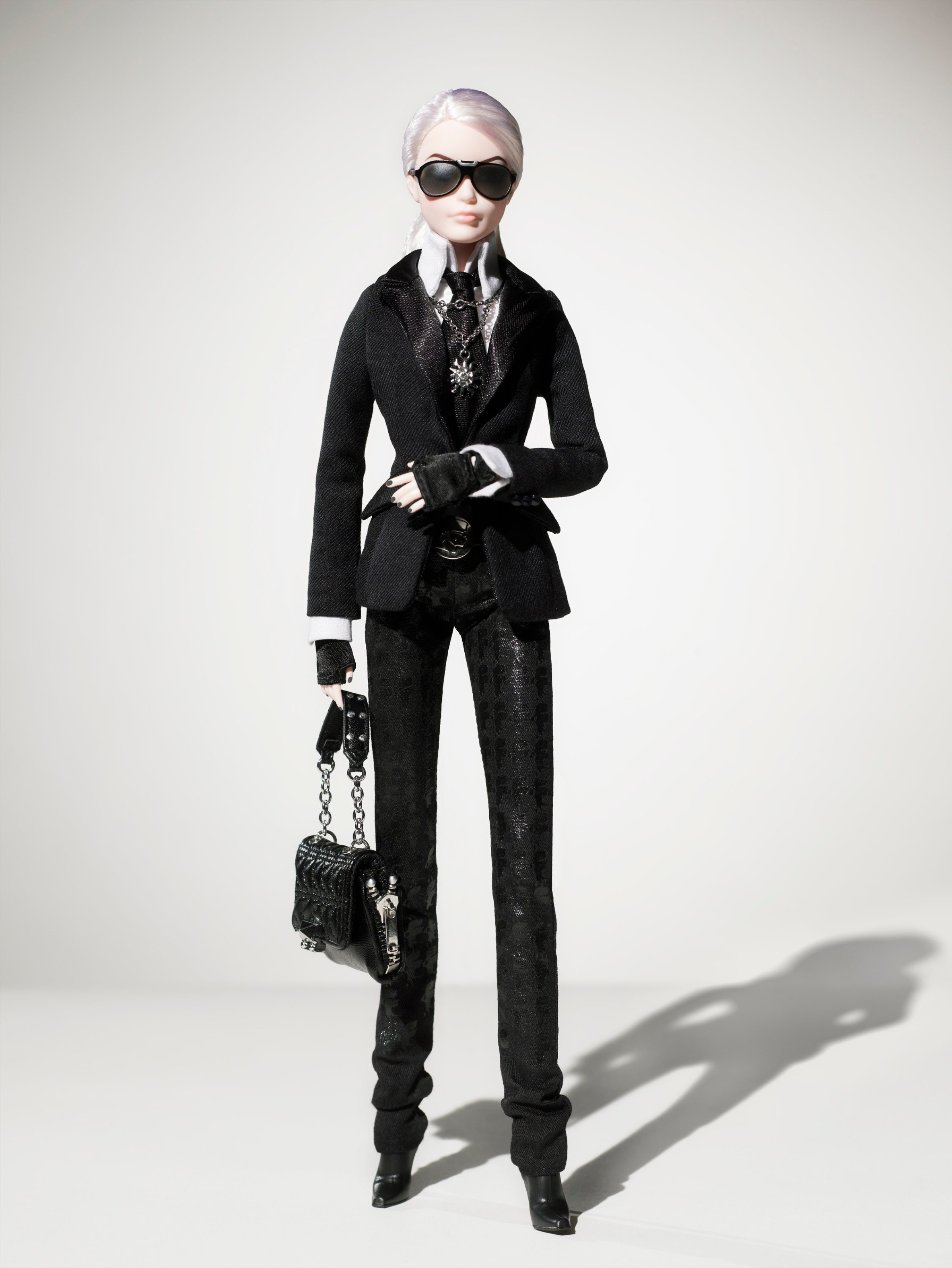 We don't know about you, but when we think of the late Karl Lagerfeld creations, we think expensive. Considering only 999 Barbies of the design emulating the legend were manufactured, you better believe it's going to take quite a chunk out of one's bank account to secure this doll. Released in 2014, "Barbie Lagerfeld" takes the designer's trademark look to heart with a black jacket and white high-collared men's shirt featuring French cuffs, not to mention the black fitted jeans. To make it supremely Lagerfeld, there are black fingerless gloves, sunglasses, ankle boots, and a black leather purse. Unless you're ready to part with a serious amount of cash, don't fall in love with this Barbie. Current auctions run as high as $9,800.

You just can't beat the original. A 1959 original Barbie in pristine condition (we're talking original packaging and everything) can go for thousands at auction. When she first debuted, the doll, wearing a black and white bathing suit and hoop earrings, sold for just $3 a piece, according to Mashable. It's noted that one of these vintage originals earned top dollar at auction for $27, 450, though The Richest says the general estimated value is $8,000 (still nothing to sneeze at). Read on to find out 17 things about Barbie you never knew.