I cheated on my wife with a redhead named Wendy. Her place was just a couple of miles away. She was always smiling when I pulled up. She gave me exactly what I wanted. Every time I left, I swore I wouldn’t come back.

Wendy was my favorite, but she wasn’t my only one. Sometimes I went across town for a quickie with a guy in a clown suit named Ronald.

Fast food is my deepest addiction. Since I was 16 and got my first car, I’ve spent endless hours idling in drive-through lanes, waiting to trade my money for my fix. I did some deeply depressing calculations and figured out that I’ve spent at least $30 a week on fast food for the last 35 years. That comes to somewhere around $55,000, enough for a bass boat or a new kitchen, with some left over to stash in the bank. Instead, I have invested it in Big Macs and big pants. If you’re addicted to anything and want to get one solid measure of how much it has hurt your life, do the math.

Next time you go to a fast-food joint, take a slow walk around the parking lot. You’ll find the spaces filled with customers eating in their cars. That’s where the junkies hang out. Alone in your car, you can get the Double Whopper and the onion rings and the chocolate shake, and nobody knows but the cashier who hands you the bag. Every car I’ve owned has ended up with salt in the cracks of the passenger seat and leftover napkins in the glove box.

One time I was in the drive-through and called out my regular order. “I’ll have a number two combo, medium-sized, with a Dr Pepper, and—”

The cashier cut in. “And a junior bacon, right?”

I was at the anonymous fast-food joint, ordering in the most anonymous way possible. But I went there so often that the cashier knew what I wanted just from hearing my voice. I’d become a regular.

I told myself I was never going back again.

I was back in a week.

Everybody needs a third place—a bar or a coffee shop or a bookstore—to feel comfortable that’s not work or home. Willie’s Wee-Nee Wagon in my hometown of Brunswick, Georgia, was my third place for a lot of years. I went there to meet friends. I went after getting in trouble with my folks. I took dates there. I slunk back there after getting dumped. I went when I didn’t know what else to do. I’d sit on the hood of my car, and somebody I knew would eventually show up.

A couple of weeks after my sister, Brenda, died at the too-young age of 63, I drove 40 miles from her place to Willie’s. I ordered a dog and some fries and a tea and ate in the car. I grieved for Brenda and felt a little better.

This sounds pathetic, I know, but one of the things I always got from fast food was companionship. I’m an introvert who learned to talk to strangers because I love my work as a reporter and how it makes me feel. I adore my wife and family and friends. But I spent so much time alone in my room growing up, so much time alone when I was single, so much time working the day shift as a newspaper reporter while my wife, Alix, worked nights.

Joleen Zubek for Reader's DigestAloneness has become my natural state. That’s not who I want to be, but it’s who I am.

On those days when the gravity of solitude tried to pin me down, fast food would serve as a little bridge to the other side. Sometimes, in a creative rut, I’d take a drive to get out of the house and see things with a fresh eye. I’d almost always end up in a drive-through. Maybe I’d sit in the car and people-watch. Maybe I’d take my food home. But at least, I’d tell myself, I’d been out among people.

This is the cruel trick of most addictions. They’re so good at short-term comfort. I’m hungry. I’m lonely. I need to feel a part of the world. Other people soothe these pains with the bottle or the needle. I soothed them with a burger and fries.

I did some more math one day, and it just about knocked me over. On a really bad day, I might eat 6,000 ­calories—roughly the same amount the average adult tiger consumes. And it goes without saying that I wasn’t spending half my day chasing down wildebeests.

How does a human being end up weighing 460 pounds? Six thousand calories at a time. For the last few years, every time I bought fast food, I kept the receipt in my billfold. The idea was that one of those meals would be the last fast-food meal I ever ate, and I wanted the receipt as a reminder. The weary ritual: I would buy something from the drive-through, toss the old receipt from my last meal, and replace it with the newest mistake. At my worst, I swapped it out twice a day.

And then I finally did. I did it. I gave up fast food for Lent.

On Fat Tuesday, the day of feasting, I got Wendy’s one last time for lunch. On Ash Wednesday, Alix and I went to the evening service at our church, and I made a vow that I was done with all the fast-food chains—anyplace with a drive-through, ketchup packets, and food that comes in a bag.

Why then? Mostly because Brenda’s death shook me. I saw what it did to the rest of us for her to leave so soon. I don’t want to put my family through that again. I want all the time I can get with the people I love. Since my last binge, I have stayed away from McDonald’s, Taco Bell, KFC, and their kin. There has been one exception: the day I took my mom to the doctor and she decided on the way home that she wanted biscuits at ­Hardee’s. When your mama wants biscuits at Hardee’s, you get biscuits at Hardee’s. I trust that God gave me a pass.
That was March 9, 2016. I stuck the receipt in my billfold. That Hardee’s receipt is still in my billfold. The ink is so faded, I can barely see what I ate.

That summer, for the first time in my life, I bought a scale. It tops out at 400 pounds, and the first few times I stepped on, the digital readout said ERROR. Then, on the last day of August, I stepped on and when I looked down, the readout said 399.

Joleen Zubek for Reader's DigestI don’t know how much guilt weighs. Guilt and shame are the hardest weight to shed. But that morning, I felt some of it lift off me.

I’ve had cravings, sure. One day in September, I drove from Charlotte to Harlan, Kentucky, for a story. I got there late and hungry. I drove down the main drag, and all the bright lights were temptations: Arby’s, Taco Bell, Pizza Hut, and my former sweetheart Wendy. I just about gave in. Then I found a Food City super­market. I got a turkey sandwich from the deli. I’m not going to pretend that it was as good as a ­Quarter Pounder, but when I got home, I was able to put an X in that box on the calendar where I am marking the days I have held on to my pledge. The calendar is now a big unbroken string of X’s, and each one of those is its own jolt of pleasure.

Let me be clear: I am still a sinner. There is a Dairy Queen five blocks from our house, and sometimes on a summer night, I’ll dive into a Blizzard with Oreos. (Not a meal, though!) I’ve never tried this hard before. I thought it was hopeless because I thought I was hopeless. I used to worry that I was lying to myself about being able to stick to a healthy diet and get in shape. Now I see that I told myself a bigger lie: that I wasn’t worth the trouble.

These days my pants are falling off for the right reasons. They used to fall off because my gut was so big that it pushed my waistband down to my knees. Now they fall off because the waistband is too big. When I rent a car, I don’t have to try out three or four until I find one where the seat belt buckles. When I go to the movies, I don’t have to flip up the armrest between the seats.

Perhaps best of all, I have performed a magical antiaging trick: I’ve erased some of the worry lines around Alix’s eyes. When we go out to eat and I skip the burger for the grilled chicken, she smiles and says, “What have you done with my husband?” When she hugs me now, her arms go all the way around me. To feel her finger­tips touch at the small of my back is a pleasure no meal can match. 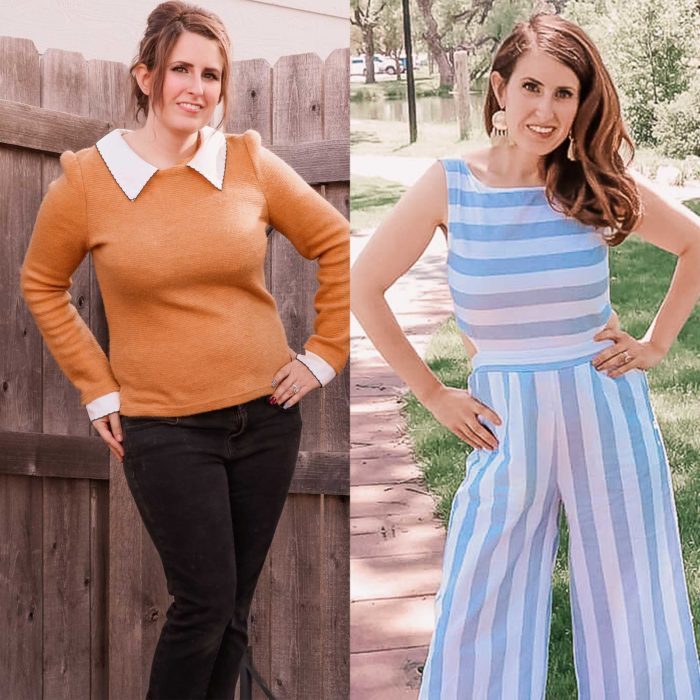 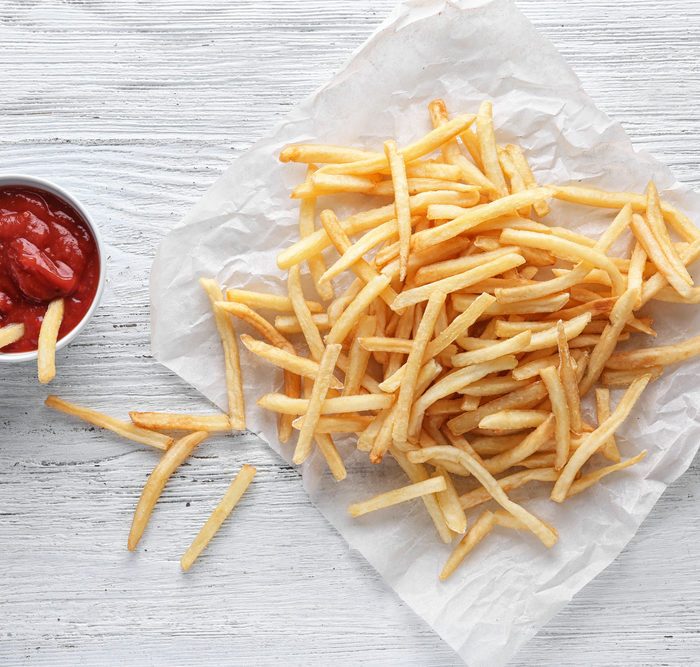 Fast-Food Items You Should Never Order 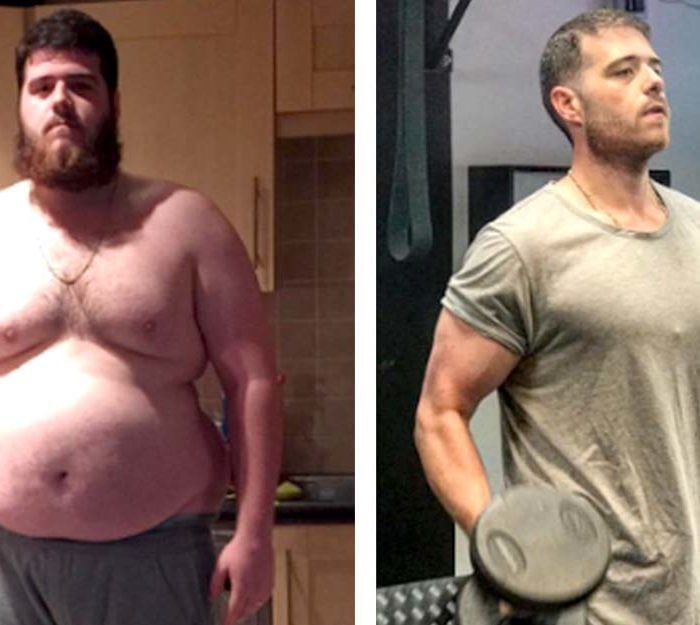