You've seen the iconic flying white skirt photos—here are the others of Marilyn Monroe you need to see! 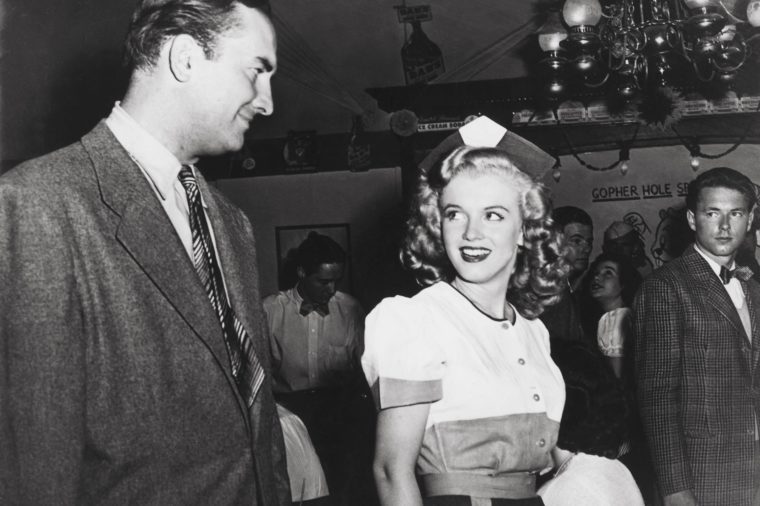 Cheesing with one of her cast-mates

Marilyn Monroe is known for starring in films like Gentleman Prefer Blondes and Some Like It Hot, but she had a few minor roles at the beginning of her career too. In 1947, she had a small role as a waitress in the film Dangerous Years starring Billy Halop. In this photo, she's smiling at one of her cast-mates, Donald Curtis. Don't miss these mysterious celebrity deaths that are still unexplained. 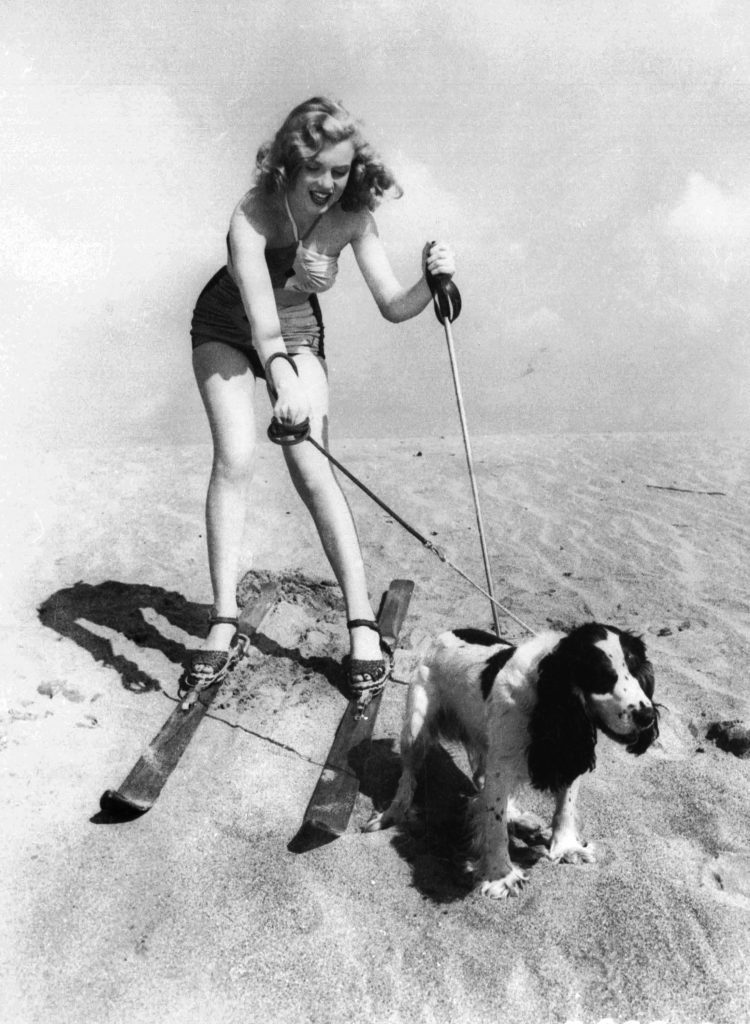 Playing around with her pups

In 1947, Marilyn Monroe took her dog Ruffles to the beach—while wearing skis. Monroe was a huge animal lover and had various cats and dogs throughout her life including two spaniels, a Chihuahua, and a basset hound. 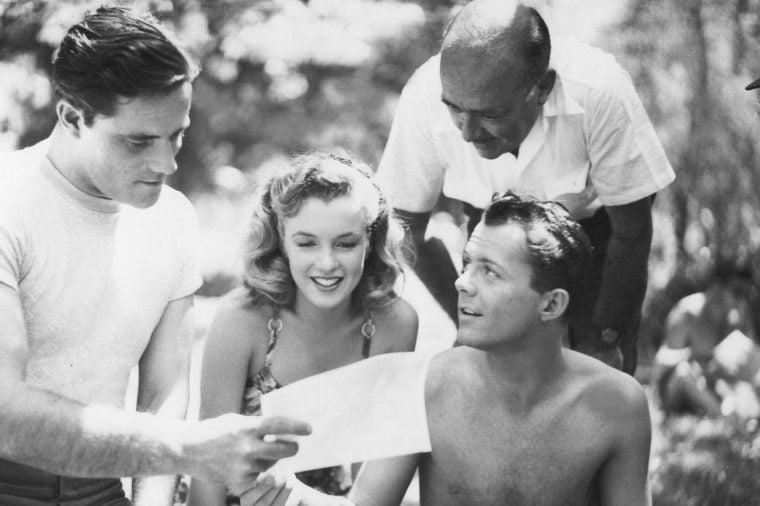 Working on a movie set

This photo is from the set of the film Scudda Ho! Scudda Hay!. The plot involves two brothers who compete for the affections of the same girl. No, Monroe doesn't play this part. Instead, she plays the tiny and uncredited part of Betty. Here are some of the weirdest jobs celebrities had before become famous. 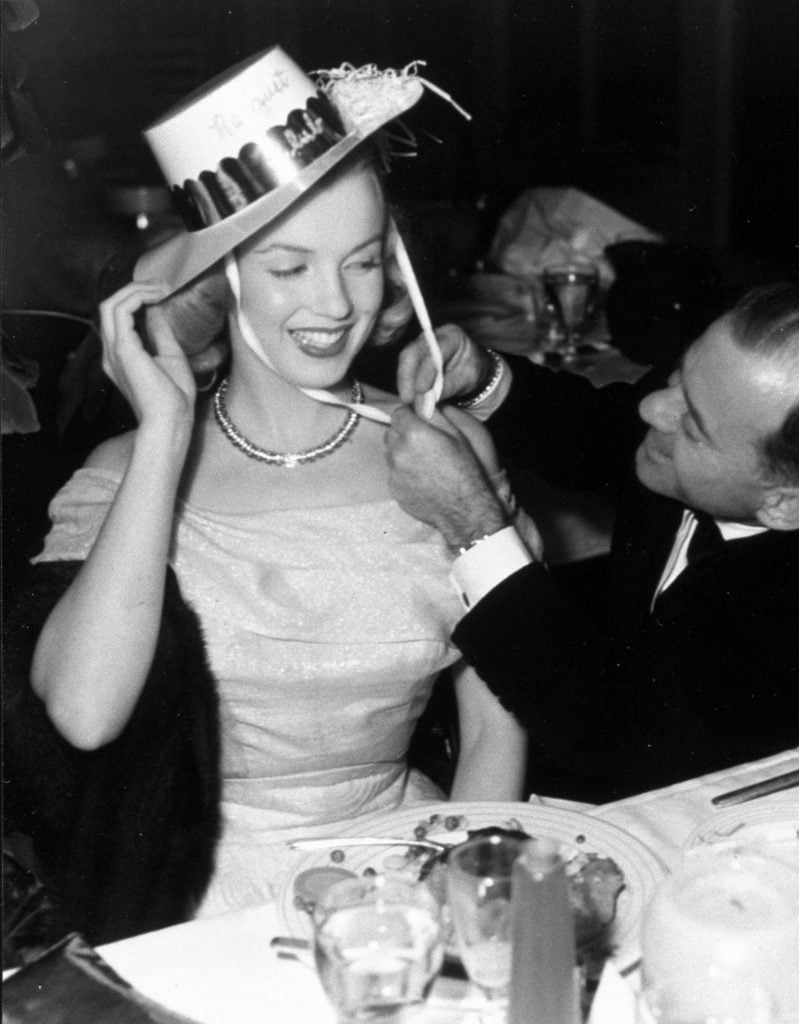 Together with her talent agent

Talent agent Johnny Hyde "discovered" Marilyn Monroe in a racquet club in Palm Springs in 1949. As the photo above shows, the duo had great chemistry, and they worked well together for years. Reportedly, however, Monroe repeatedly refused his marriage proposals, saying that she loved him, but she wasn't in love with him. Don't miss these rarely seen pictures you won't find in history books. 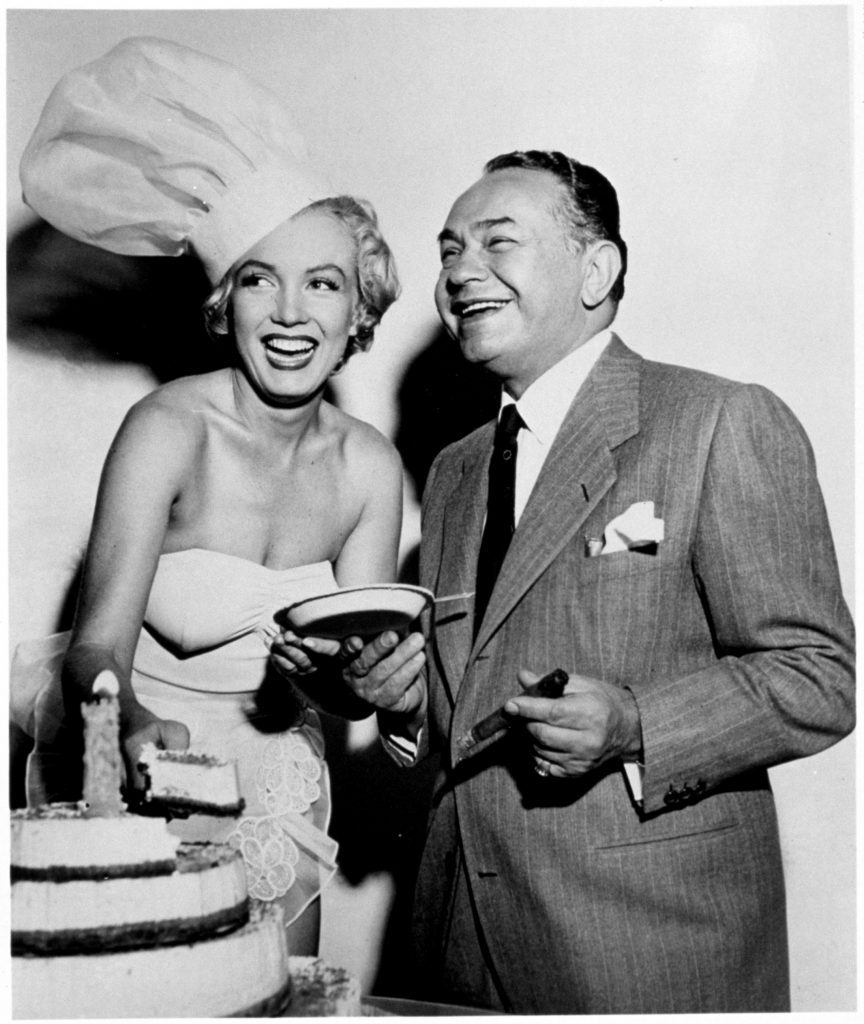 A jolly good time with cake!

Monroe's movies typically capture her joking side, but she was just as lighthearted off-screen. In this picture, she laughs with actor Edward G. Robinson while serving him a slice of cake and casually sporting a chef's hat. This is the untold story behind Marilyn Monroe's "Happy Birthday Mr. President" dress. 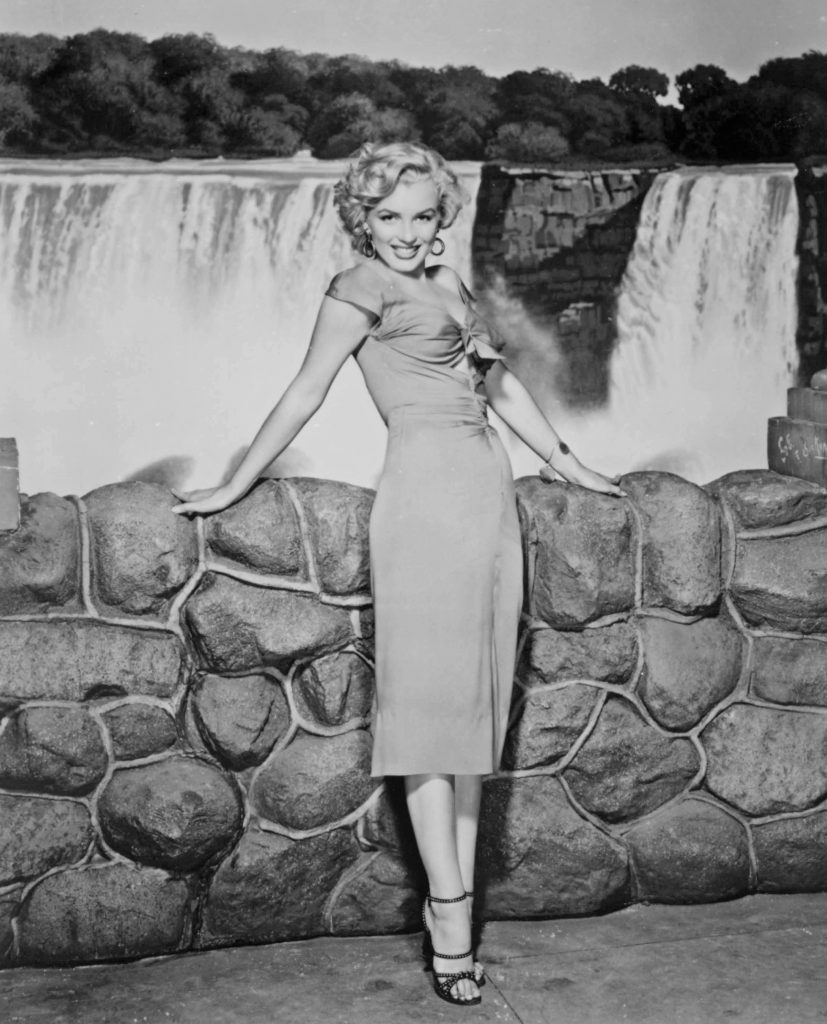 Posing with the falls

In 1952, Monroe posed near Niagara Falls, New York. Her film of the same name, Niagra, features a famous walk by Monroe's character across cobblestone streets. It holds the record for the longest walk in cinema history—116 feet of film, according to imdb.com. Did you know the FBI had a file on Marilyn Monroe, and these other celebrities? 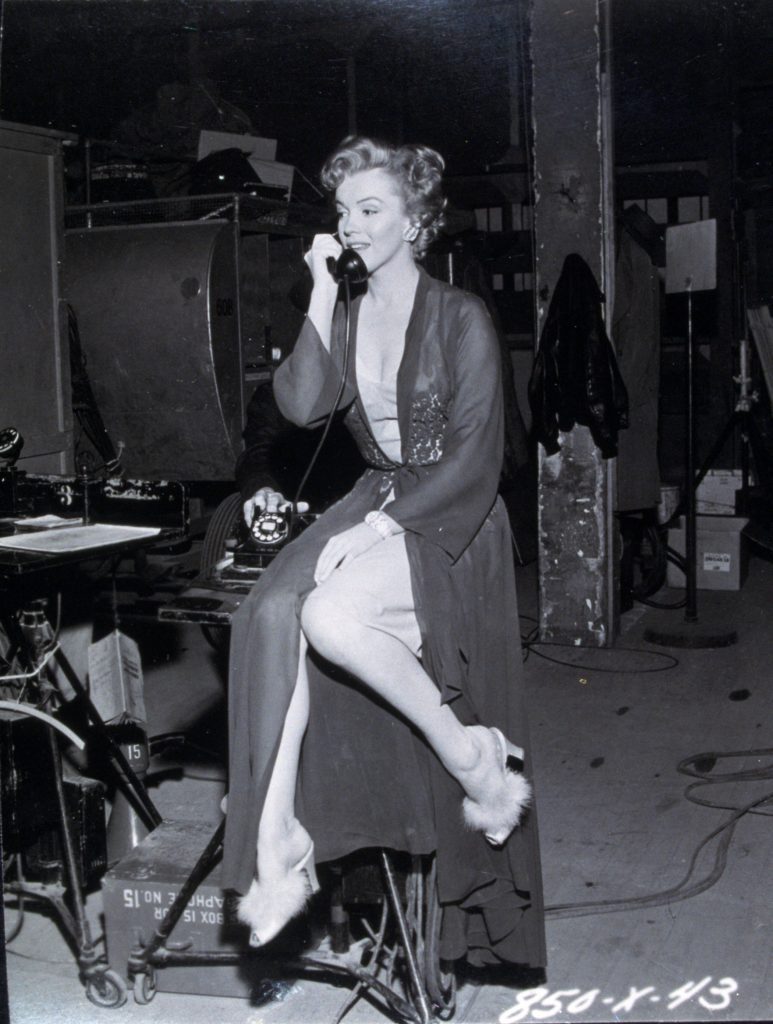 Before cell phones and smartphones, there were good old rotary phones, like the one Monroe uses in this picture. She's on the set of her 1952 film Don't Bother To Knock. Here are the rarely seen photos of Jackie Kennedy. 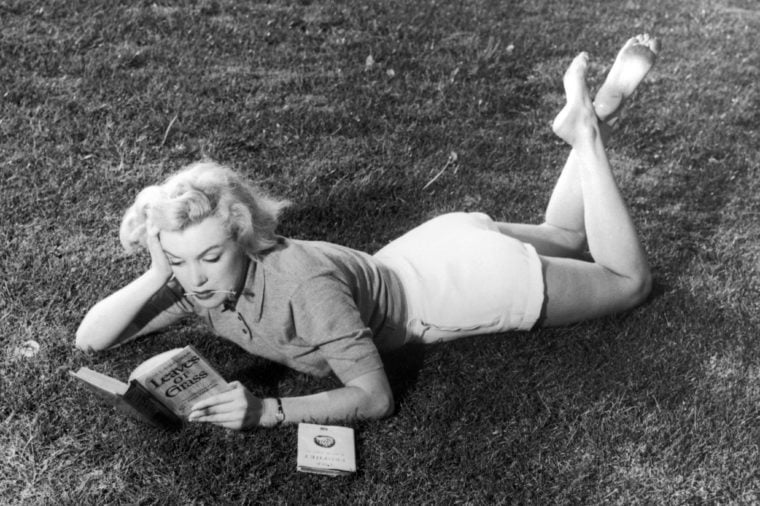 Ever the book lover

Monroe was a bookworm and loved reading. In this image from 1952, she reads Leaves Of Grass while fittingly laying down on a lawn. 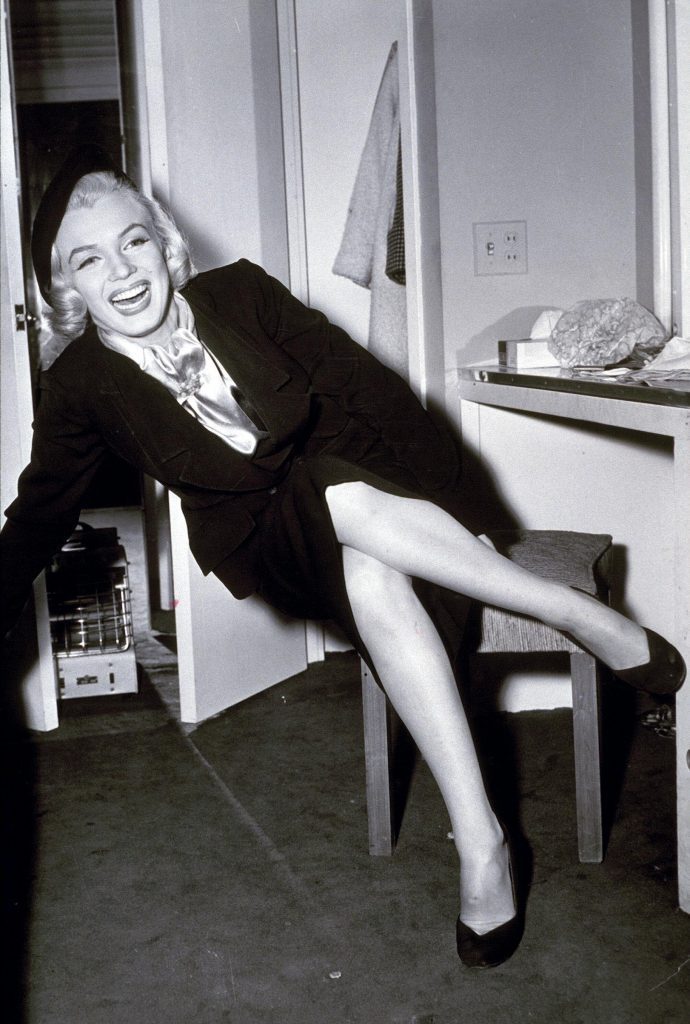 While waiting to shoot a scene for her movie How To Marry A Millionaire, Monroe flashes her famous smile and is practically falling off her chair laughing. Marilyn Monroe is pretty easy to pronounce but these celebrity names are commonly mispronounced. 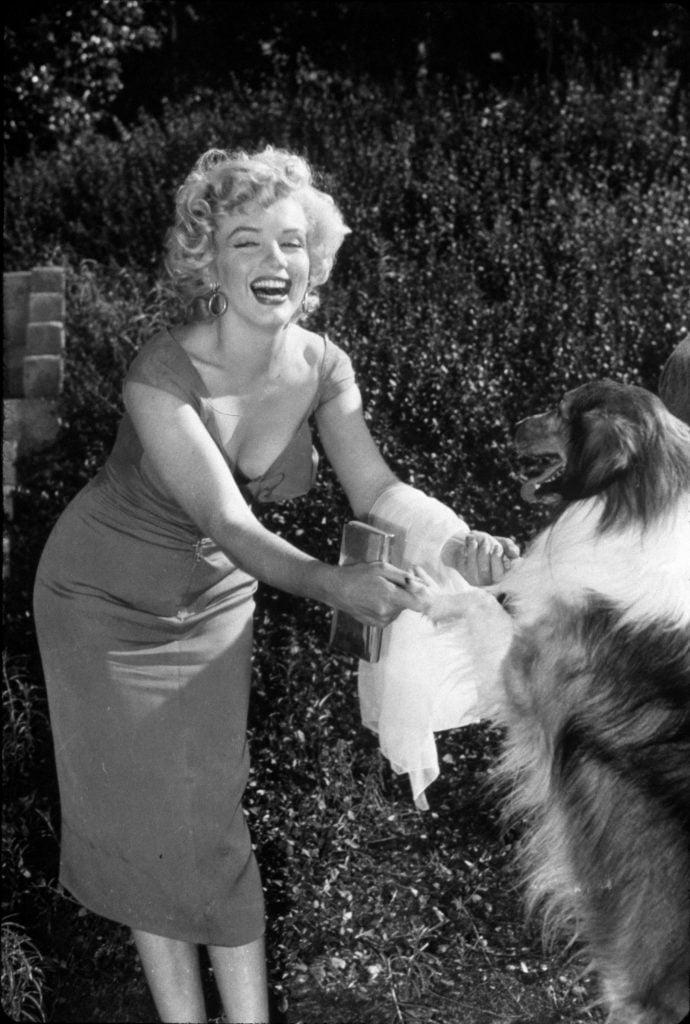 Playing around with another cute pup

This is yet another gorgeous photo of Monroe with an adorable pup. This time, Monroe met canine celeb Lassie at a party thrown by Ray Anthony—a musician who wrote a song for Monroe simply called "Marilyn," per themarilyncollection.com. 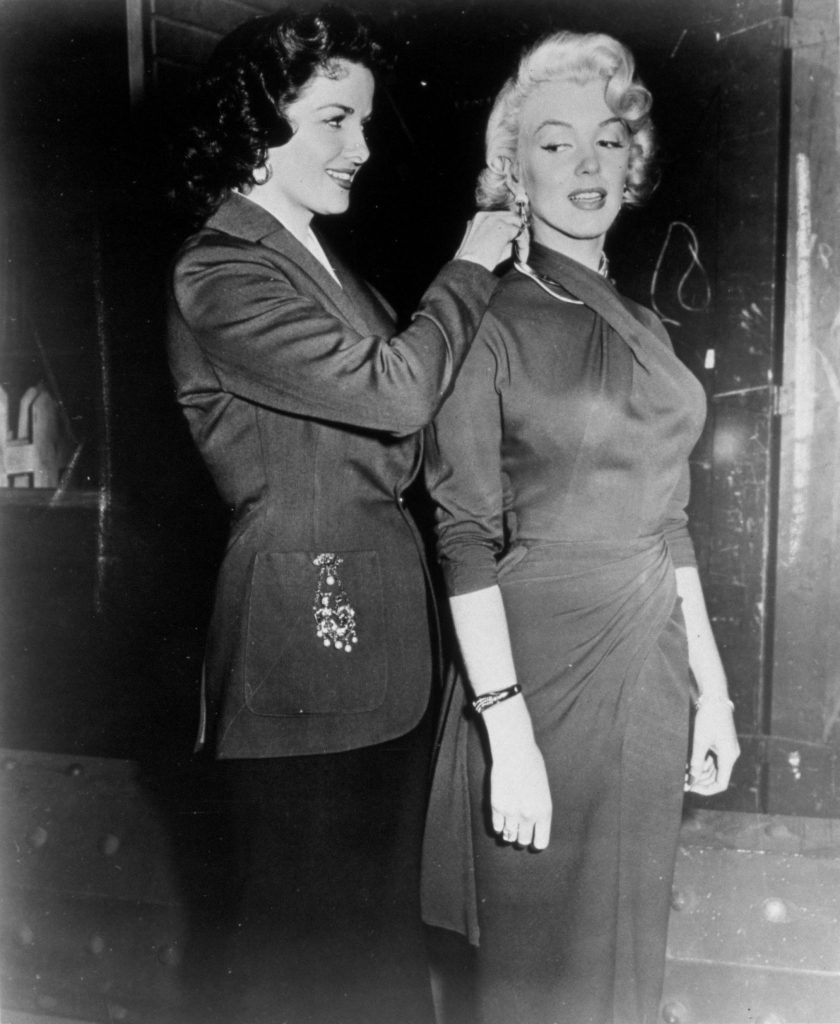 Getting some help from a friend

Girls helping other girls never go out of style. Jane Russell, Monroe's co-star in Gentlemen Prefer Blondes, helps Monroe with her necklace. We hope you didn't fall for any of these celebrity death hoaxes. 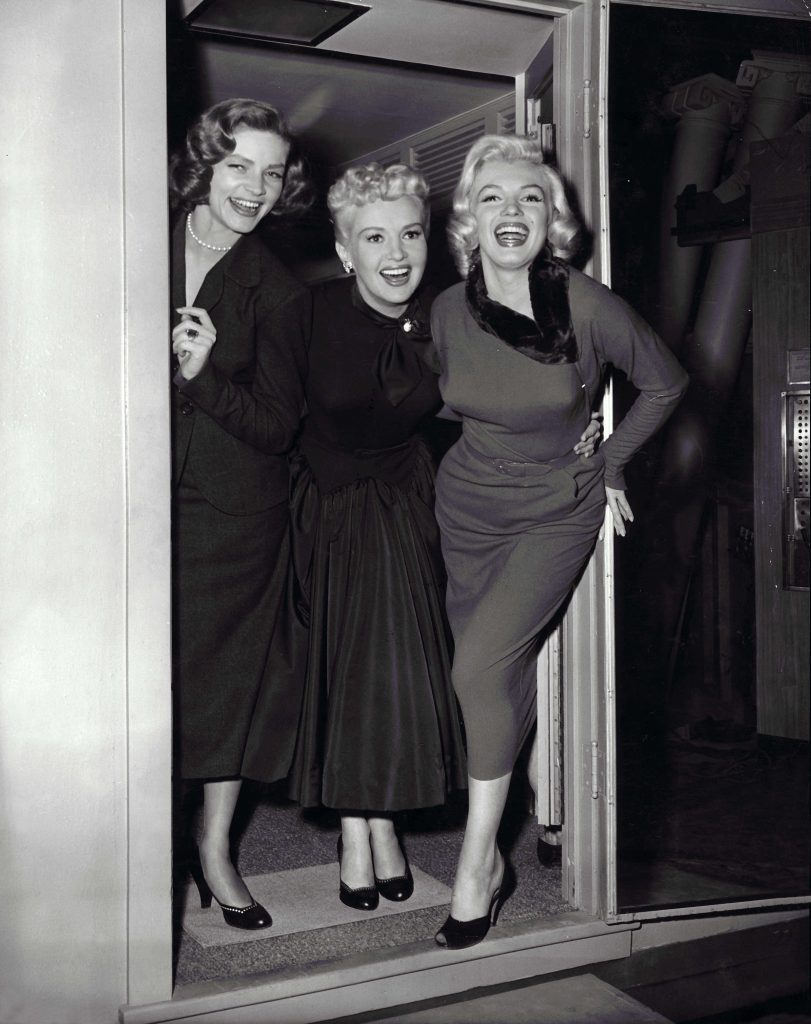 Hanging with her fellow actresses

Three of the most famous actresses of the 1950s—Monroe, Lauren Bacall, and Betty Grable—step out of a dressing room while filming How To Marry A Millionaire. Here are the classic movies that didn't win Best Picture. 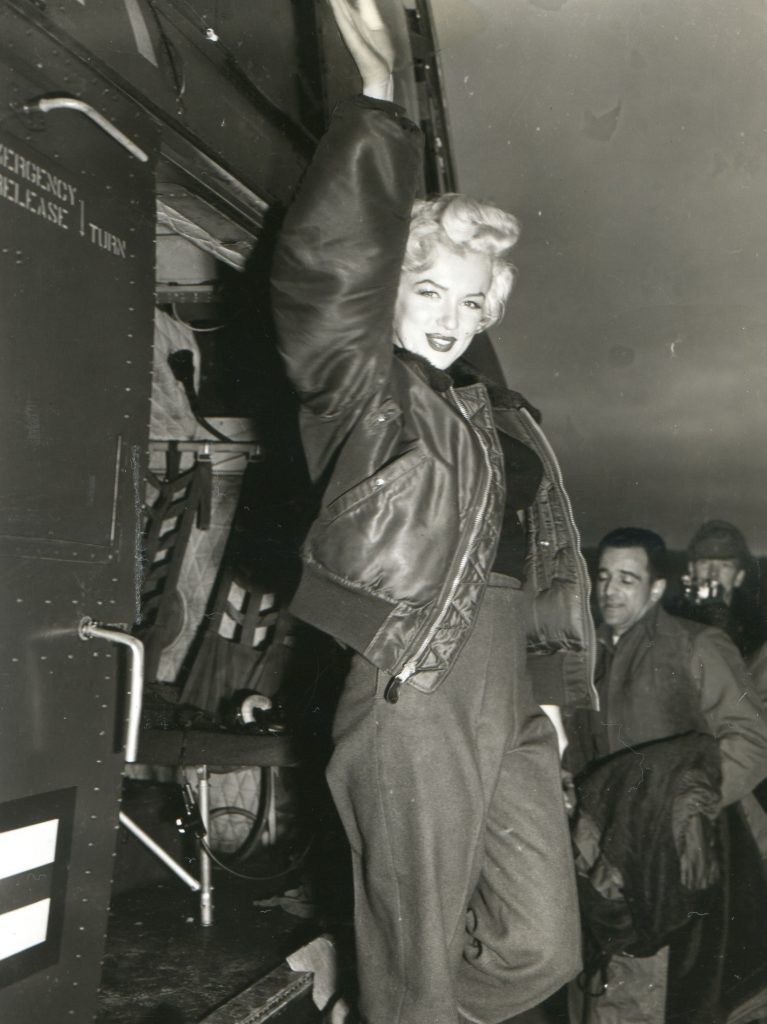 Monroe strikes a pose while hopping off a plane in South Korea to appear with the USO Camp Show "Anything Goes" in 1954. These camp shows were to boost morale among soldiers during World War II, according to ABMC Education. 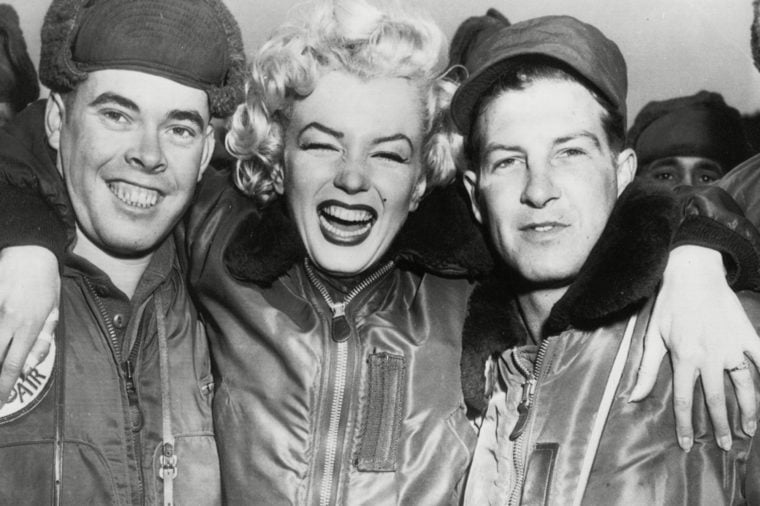 During the same trip to South Korea, Monroe grins ear-to-ear with two soldiers from New York at the third division airstrip during her four-day tour. 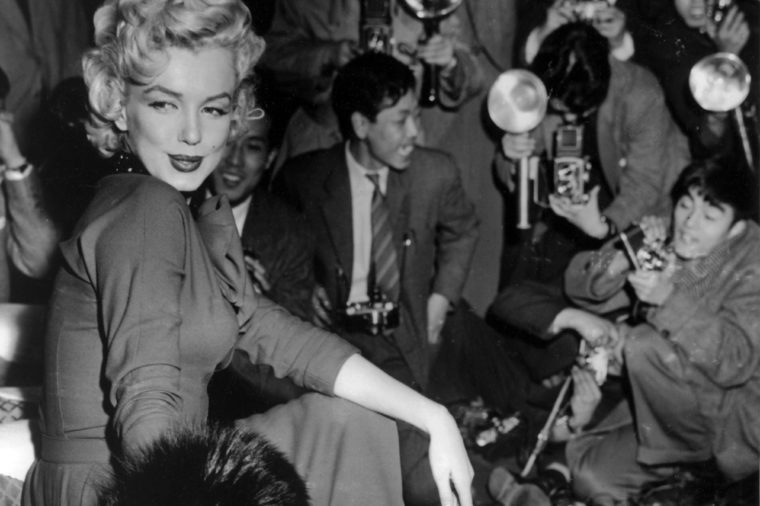 This candid photo of Monroe perched while speaking to the press is classic old Hollywood. Here are the old-Hollywood style tips you should be copying. 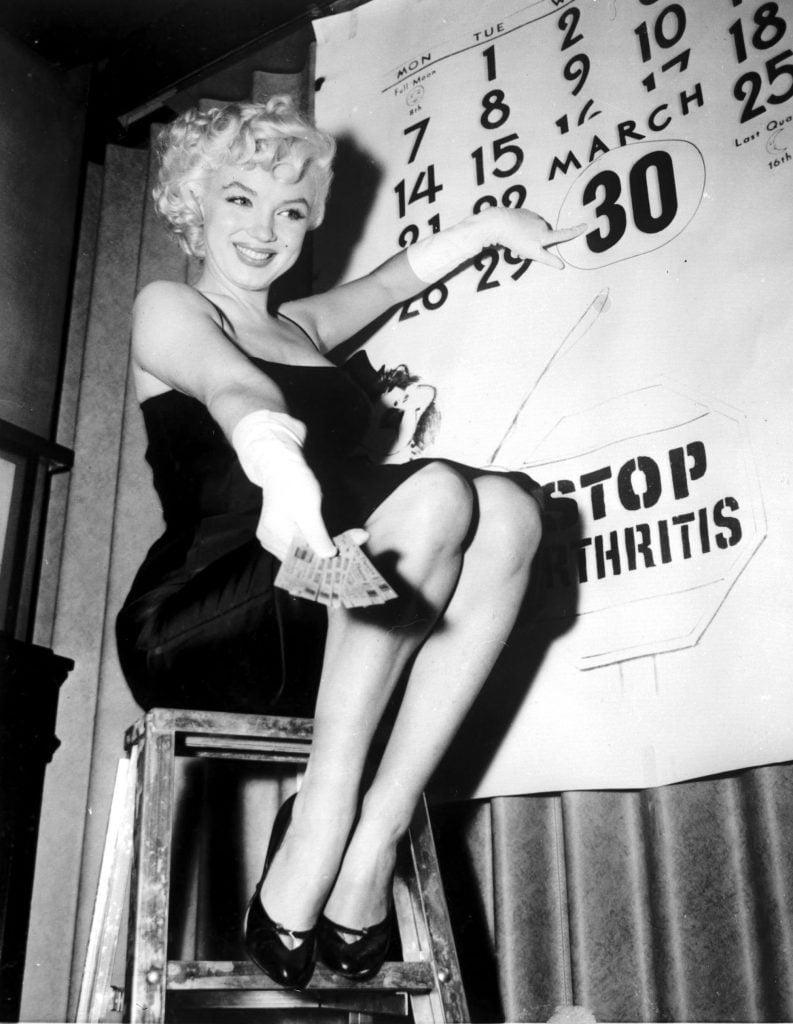 All for a good cause

Monroe advocated for good causes including civil rights. She offered assistance to kid-focused charities such as Milk Fund For Babies and March of Dimes, according to biography.com. In this photo, she hands out tickets to a charity circus performance at Sardi's restaurant in New York to benefit research for arthritis. 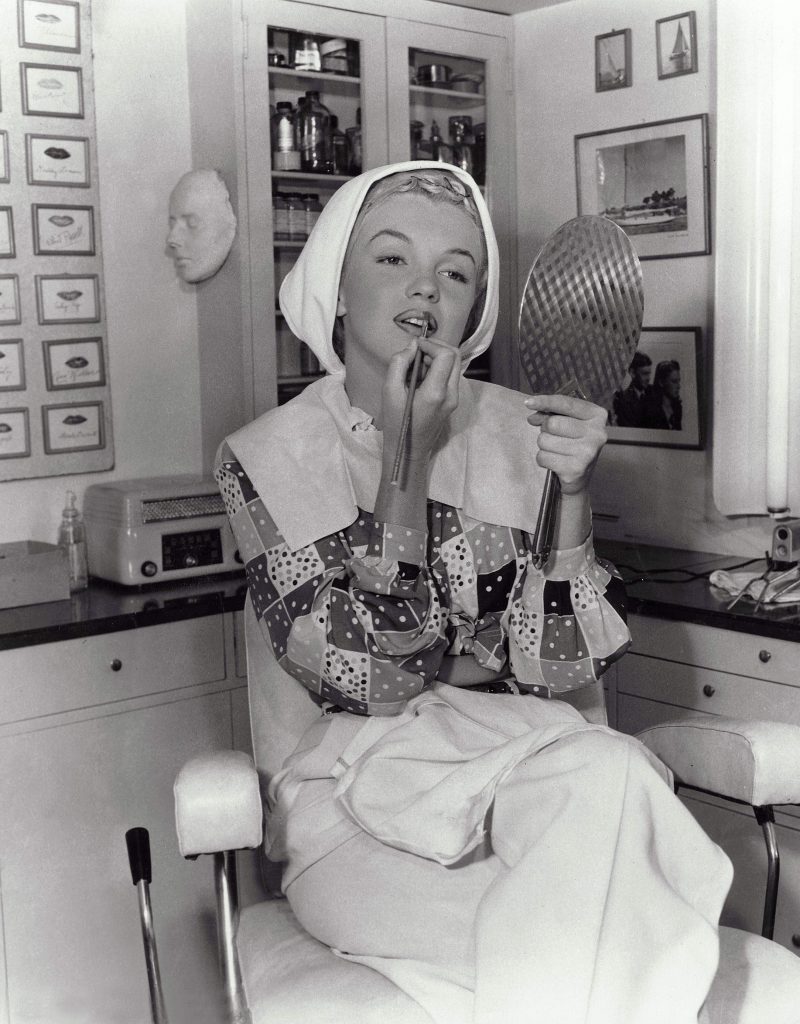 Monroe's beauty is continuously praised, emulated, and referenced. It's humbling to know the actress applied her own bold, red lip color with a hand-held mirror to boot. Here are some style secrets you'll want to steal from Marilyn Monroe. 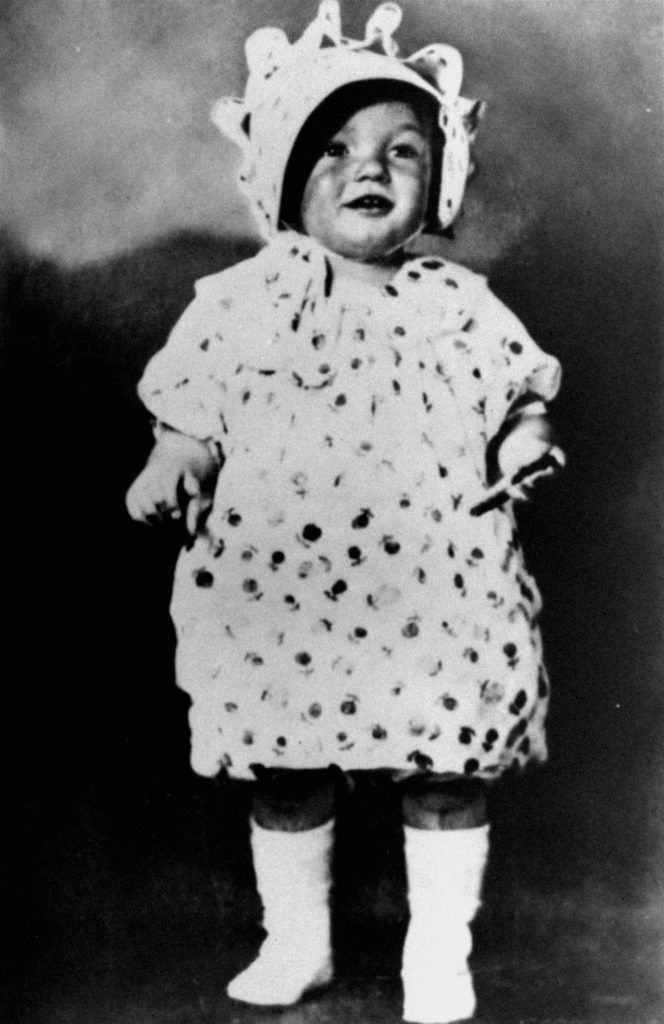 At first glance, you might not recognize the young child as Monroe. The photo from her younger years in 1928 is technically of Norma Jeane Mortenson—Monroe's original name before legally changing it in 1956, per biography.com. Here are more historical figures who used fake names. 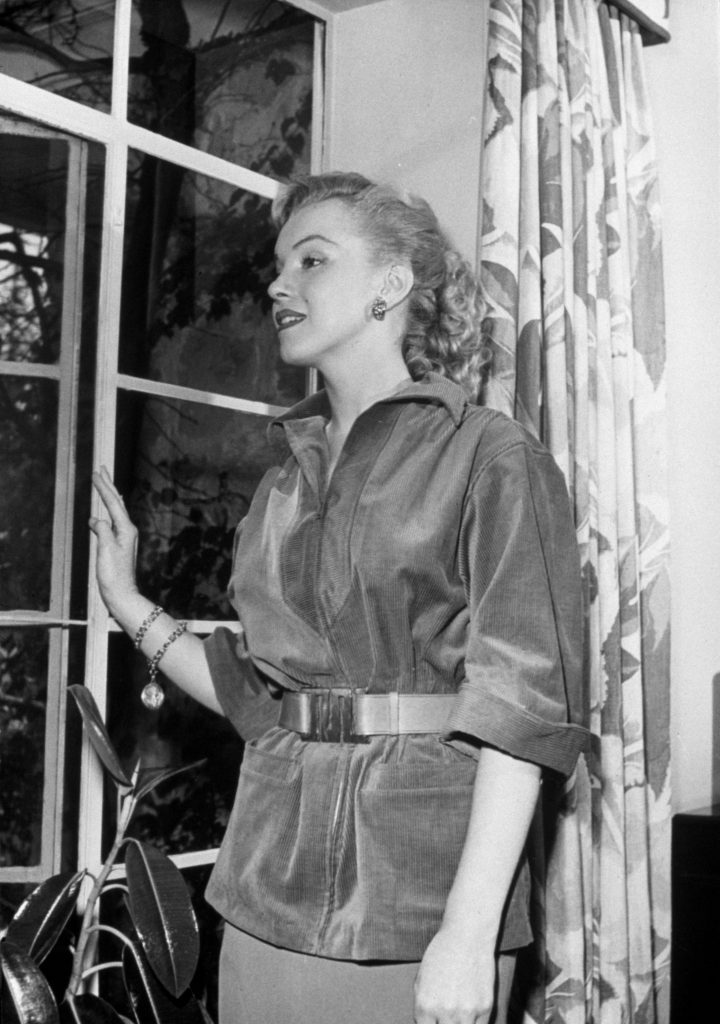 Unlike her well-known window scene in The Seven Year Itch, this candid photo of Monroe looking out a window is a bit more relaxed. These are the classic movies people lie about watching. 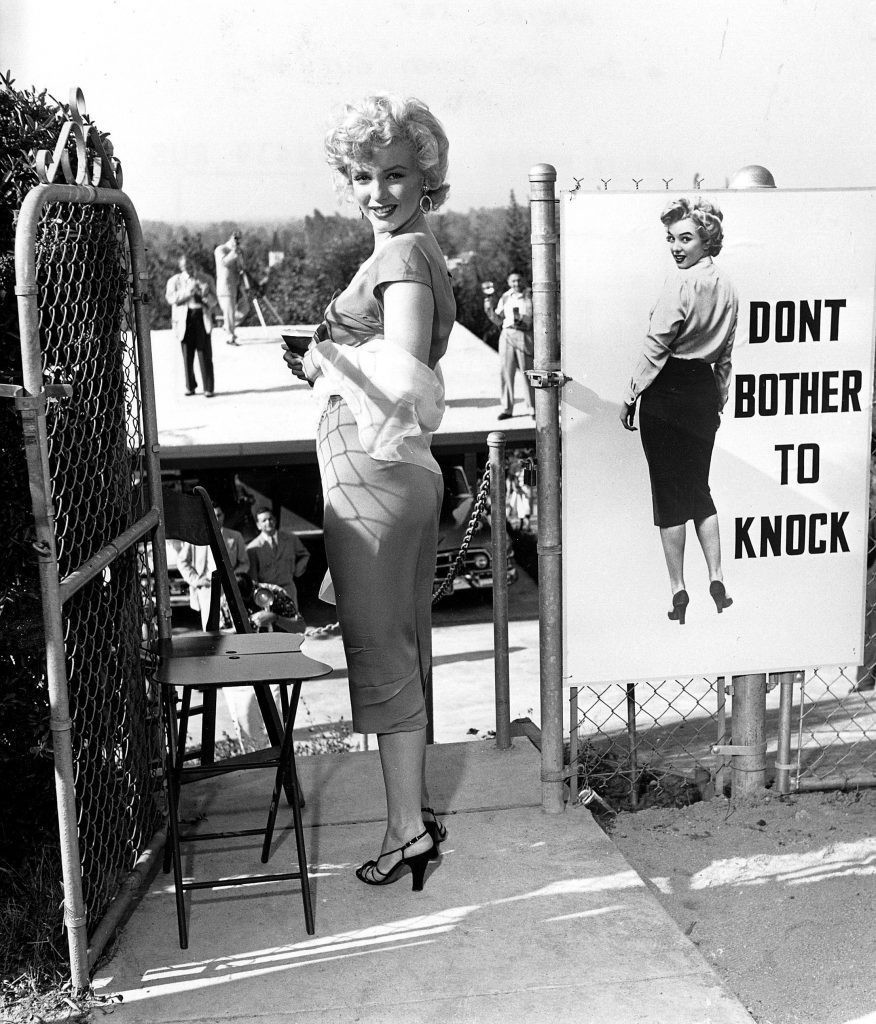 Which pose is better?!

In 1952, Monroe starred in Don't Bother To Knock, a movie about an airline pilot pursuing a babysitter who is seemingly increasingly dangerous. In this photo, she intentionally or unintentionally recreates her own pose for the film's poster. Next, check out what Queen Elizabeth II and Marilyn Monroe have in common—and other surprising historical connections.