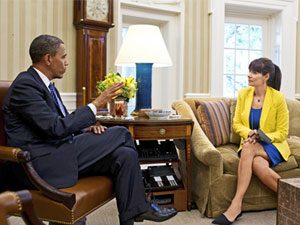 Courtesy Pete Souza/The White House
Reader’s Digest: You write a book about your first term as president. What’s the title?

President Obama: Wow! It always takes me a long time to think of [book] titles. It’s just like thinking of our daughters’ names. I remember we were in the hospital for the first 48 hours trying to figure out, All right, what are we gonna call this one? I think the theme of my first term would have to do with persistence …Somehow I think the title would speak to just sticking with it.

RD: You said you made a mistake early in your presidency by not focusing enough on storytelling. What story would you tell now?

Obama: What I would’ve done better was to prepare the American people for the challenges we are going to be facing, the climbing out of the worst recession since the Great Depression. Had I expressed to the American people that we are going to solve these problems, but it’s going to take time … Trying to find that balance between projecting confidence but also letting people know this is gonna be a process. It’s not going to happen instantaneously.

RD: Please finish this sentence for me: “The world needs the next president to …”

RD: Let’s talk about family. What did you say to Sasha and Malia the night that Osama bin Laden was killed?

Obama: They knew enough about bin Laden and 9/11, even though Sasha was three months old when it happened. I was able to explain to them that the person who planned 9/11 was killed by our forces. I think what was most important was to explain to them what that meant for young people like them who had lost mothers and fathers in the Twin Towers or in the Pentagon or in Pennsylvania. Describing that for Malia and Sasha makes it personal. It made them understand what it would mean for them to lose a parent in a terrible way like that. 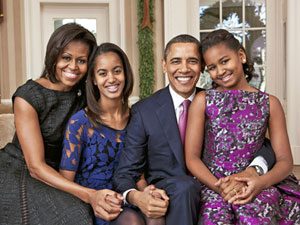 Courtesy Pete Souza/The White House
RD: I believe that after people die, they are sort of still with us—for instance, I feel my father is always present with me, watching me. As your mother looks down, what is she thinking about the life you’re leading?

Obama: I have to say she was pretty biased. [Laughs] She was proud of me even when I was a young ne’er-do-well, so she’d be pretty proud of me now. What she’d probably be most proud of is the fact that I’m a good husband and a good dad. You know, she was very lucky in so many ways, but she wasn’t always lucky in love. My father left very early in my life. She ended up divorcing my stepfather later on, so for her to see her son being somebody who is there for his family and who has been a junior partner but a pretty good partner in raising a couple of terrific girls—I think that would really make her happy.

RD: I’ve read that your mother told you, “If nothing else, I’ve given you an interesting life.” What kind of life do you want to give your daughters?

Obama: Well, they’ve already had an interesting life. The people I know who are happiest, in addition to having wonderful families, are also people who are making a contribution. Each of us finds our own way to make a contribution. I’ll probably warn them away from politics. [Laughs] But whatever path they choose, I hope that they will be thinking about what it’s doing for other people. Because, I’ve told them this before, I firmly believe that at the end of your life, when you look back, there are going to be two things you remember. It’s gonna be the love you had for friends and family and those moments when that love expressed itself. And then there are the memories of when you helped somebody out. I think that’s what shapes your life and gives it meaning.

RD: What’s the most memorable day you’ve ever had at church, excluding weddings and baptisms and things of that nature?

Obama: When I was working with a bunch of Catholic churches on the South Side [of Chicago]. I hadn’t been raised going to church regularly. But here I was working with these churches, and I thought, I need to start going to church a little more. I remember the first time that I went to a very small storefront church in Chicago. It was an African American church, a Baptist church. There probably weren’t more than a hundred people in the congregation. They had maybe ten people in the choir. But the joy and the energy that they projected in that church—and everybody was singing. I remember starting to cry during this service just because you could see these were mostly folks who were working-class, never had a lot of money, didn’t have a lot of material possessions. Many of them were middle-aged or older and probably had experienced prejudice in their lives or certainly hardship. To see how their faith and God’s grace could lift them out of their daily circumstances was really moving to me. I think those early visits started my own faith journey. 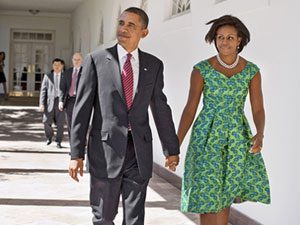 Ashley Gilbertson/VII
RD: You’ve said you’re very even-keeled. But everyone gets down from time to time. Do you have a strategy you use or a trick to get back up? Do you have a theme song, Mr. President? [Everyone laughs]

Obama: I will tell you that my kids will always yank me out of stuff. So we’re pretty religious about family dinner at 6:30. And the great thing about living above the store is no matter how busy I am, I can walk up—it takes a minute. I can sit down, spend an hour with the girls, and come back down and work. But it pulls me out of whatever my personal struggles or challenges are, and it’s one of the great things about being a parent. You’re always reminded, Oh, this isn’t about you. It’s about these kids, their lives, and how you make them better.
And then I’m a big believer in exercise. If I’m sort of in a funk, going out and just breaking a sweat, doing something. We have a little gym upstairs, and in addition to the usual equipment and the weights and the treadmill, there’s a little punching bag there … [Everyone laughs]

RD: I have some special Reader’s Digest questions for you.

Obama: One thing I should say is that my grandparents loved Reader’s Digest, so I grew up with it. When my grandfather got the Digest in the mail, he would insist on reading me the jokes. And he was a big collector of Reader’s Digest jokes.

RD: We’ve been around for 90 years, and almost from that first year, we regularly ran a feature called My Most Unforgettable Character. Outside your family, who is your most unforgettable character?

Obama: I visit Walter Reed every three months, and it’s always powerful seeing our young men and women coming back from Iraq and Afghanistan and some of them going through some devastating injuries. But the last time I was in Afghanistan, ten guys had just been hit with an IED. So I went to the hospital to visit them, and there was one guy who was completely knocked out. Face was all puffy, and he had a tube up his nose, and his eyes were shut. I just very softly said, “We’re so proud of you and appreciate everything you’ve done, and we’re thinking of you.” I was about to leave, and just as I’m about to leave, suddenly there’s rustling under the blanket, and his hand comes up just to shake my hand. The kid was probably 20, 21. And he never opened his eyes.

About two or three months later, I saw him at Walter Reed, and he was walking. He was with his dad from Maryland. I always remember him, not because he’s unusual but because he embodies what these guys and gals are doing for us every single day. I think we hung up a picture of that moment along the walls here somewhere, and everybody always stops and sees it because it really does capture what these folks are doing: protecting our freedom.

RD: We also have a popular column called Word Power. Many people around the world say they improve their vocabulary reading it. So what’s your favorite word in any language?

Obama: Grace. I love the word grace because I think it captures what we strive for in life. It’s not just an individual thing. It’s not just a matter of excellence or something you’ve achieved. It’s something internal to you, but it’s also something that’s given to you. It’s not just individual, but it has to do with your relationships with others. You know, those moments of grace that we have—grace notes that we have in our lives.

RD: You know our humor and that we popularized the phrase “laughter is the best medicine.”

RD: So I wanted to ask you what your favorite joke is and ask you to tell it to me now.

Obama: I don’t know if this is my favorite joke, but it’s my most recent joke. This is a true story, but it’s also a good joke. And it’s fitting for the season: So my campaign manager is in some meeting, and this couple has brought their four-year-old son. Charming kid, full of energy, and clearly the parents were very proud of him. So somewhere in the room is a picture of me, and the parents, prompting him, say, “Who’s that?” The boy looks and says, “That’s Barack Obama.” And they say, “And what does Barack Obama do?” And he thinks for a second, and he says, “He approves this message.” [Everyone laughs]

Obama: Oh, and I agree with you. I think the ones we love are always with us, and I can tell you that this interview gave my grandparents great pleasure.