1. The real Maria was not in love with Captain von Trapp …

… At least not at first. In the movie The Sound of Music, Maria fell for the children and Georg von Trapp simultaneously. But in real life when he proposed, “I really and truly was not in love,” Maria wrote in her 1948 memoir. “I liked him but I didn’t love him. However, I loved the children, and so in a way I really married the children.”

2. Maria was not the one who taught the von Trapp children how to sing.

In 1935, a young priest named Father Franz Wasner came to the von Trapp villa. When he heard the family sing in four-part harmony, Wasner thought they had potential and began teaching them more complicated material. About a year later, they caught the attention of Lotte Lehmann, the muse of composer Richard Strauss and Vienna’s premier soprano. That summer, she was performing at the Salzburg music festival and insisted that the von Trapps sing at its competition. They won first prize, which helped launch their career. By 1937, the Trapp Chamber Choir was well known enough to go on a European concert tour.

When the stage version of The Sound of Music was being written, Maria von Trapp was very upset that Father Wasner (shown left, center left, next to Captain von Trapp) did not exist in the show. The writers told her that the show could contain either Father Wasner or Maria, but not both.

3. The eldest von Trapp was not a daughter who was “16 going on 17″—and none of the children fell in love with a Nazi.

While the main story of The Sound of Music was taken from the biography of the Von Trapps, the subplot of Liesl and her romance with Rolf, a telegraph delivery boy who became a Nazi, was the invention of the writers. Of all the changes made to their story, the Liesl/Rolf subplot most stupefied the von Trapps. The eldest von Trapp child was Rupert, a strapping, 54-year-old Vermont physician when the movie was released. For years, when people asked him which of the von Trapp kids he was, he’d curtsy and say, “I’m Liesl.”

4.  While the von Trapps did walk out of Austria with a knapsack each, they had something valuable waiting for them in America.

They had one thing that most refugees can only dream about: a job. A year earlier, an American impresario had offered the family a chance to sing in New York. In August 1938, each family member packed one rucksack, pretending they were going on a family vacation to Italy.

5. The von Trapps did not escape Austria by climbing a mountain.

Instead, they calmly boarded a train, which took them into the south Tyrol, part of Italy. It turns out that they did leave in the nick of time—the next day, the Nazis closed the border. The family was always amused that the musical’s creators took them over the Alps to Switzerland: “Don’t they know geography in Hollywood? Salzburg does not border on Switzerland!” Maria told a reporter in 1967.

6. In real life, Maria von Trapp was the taskmaster, while the Baron was the softy.

Maria set the priorities, managed the finances, and determined the artistic direction of their singing group. She was the martinet, dictating economy, discipline, and focus when they toured. Georg—whose performing role was largely limited to being introduced to the audience before the finale—attended to domestic details and provided moral support.

For nearly a decade—from roughly the mid-1940s into the mid-1950s—the von Trapps toured three seasons out of the year. During World War II, they averaged more than 100 U.S. concerts in the a year, earning average fees of $1,000 per concert.

8. Maria von Trapp ripped up offers to make her story into a musical.

When Maria’s agent was contacted in the late 1950s with an offer to buy the stage rights to her story, the producers didn’t know that Maria had renounced show business in favor of being a missionary in the South Pacific. After they found out, they dispatched countless letters to her; whenever she checked in at mission stations in the remote islands, she kept finding letters from people in America about a Broadway show. She tore then up and concentrated on her vocation. When she returned to America months later, she was startled to be met at the dock in San Francisco by producer Richard Halliday and his actress wife, Mary Martin. To persuade her to sell them the rights, they whisked Maria away to the theater to see Martin perform in Annie Get Your Gun. They were successful: Martin (shown above left) ended up being the first to play Maria von Trapp when the musical opened on Broadway on November 16, 1959.

9. Contrary to the words of “My Favorite Things,” no one eats schnitzel with noodles in Austria.

Additional fact: In the stage version of The Sound of Music, “My Favorite Things” was performed as a duet between the Mother Superior and Maria, not as a tune sung by Maria to comfort the frightened von Trapp kids during a storm.

10. Writers originally ended the musical with the family being held in a detention center on Ellis Island.

In an early draft, a fictional concert manager for the von Trapps convinces the immigration authorities to release Maria after they hear how wonderfully she can sing.

In 1984, the song was played there to honor Austrian president Rudolf Kirchschlager during a state visit. One of the honored guests at the White House dinner was the Baroness Maria von Trapp, who was no doubt amused by the mistake.

12. The Sound of Music initially had the lackluster title of … Love Song.

It was changed to The Sound of Music when the lawyer for composers Richard Rodgers and Oscar Hammerstein found dozens of copyrighted shows called Love Song and begged them to use something less susceptible to a lawsuit.

13. Upon opening on Broadway, The Sound of Music was panned by critics.

Walter Kerr of the Herald Tribune wrote: “Before [it] is halfway through its promising chores, it becomes not only too sweet for words, but almost too sweet for music.” Brooks Atkinson of the New York Times wrote: “the scenario of The Sound of Music has the hackneyed look of the musical theater [Rodgers and Hammerstein] replaced with Oklahoma! in 1943. . . It is disappointing to see the American musical stage succumbing to the clichés of operetta.

14. Penning a bad review of the The Sound of Music changed one writer’s career.

Pauline Kael wrote for McCall’s, a women’s magazine, that the film was “a sugar-coated lie that people seem to want to eat . . . Wasn’t there perhaps one little von Trapp who didn’t want to sing his head off. . . or who got nervous and threw up if he had to get on a stage?” McCall’s readers demanded Kael be fired, and she was. She was soon hired to review for the New Yorker, where she became one of the film world’s most eminent and respected critics.

15. The Sound of Music was originally considered as a movie vehicle for Audrey Hepburn.

Two German films—Die Trapp Familie and its sequel Die Trapp Familie in Amerika—were made in the 1950s based on Maria’s 1948 memoir. Since neither was released in America, Paramount at first wondered if an English-language remake might star Audrey Hepburn.

16. The stars of the movie version of The Sound of Music could have been Doris Day and Sean Connery.

Doris Day, then at the height of her box-office power, was being pitched heavily. Other potential Marias were Leslie Caron, Anne Bancroft, and Shirley Jones. To play Captain von Trapp, FOX executives were keen on Bing Crosby. Other male actors considered were Rex Harrison, Sean Connery, Peter Finch, Louis Jourdan, and Maximillian Schell. Yul Brynner lobbied extensively for the part.

17. And the role of Liesl, the eldest daughter, might have been played by Mia Farrow.

In literal-minded Argentina, it was known as The Rebellious Novice, and in West Germany, it was released with the title My Song, My Dream.

19. The Sound of Music has been a smash hit everywhere it’s been released—except in Austria.

In Austria, the movie ran for only three weeks in 1965, and it was not shown on television there until 2000. One theory for its lack of success? Austrians have disliked the musical’s Americanized portrayal of their culture. Others have speculated that people also objected to the show’s depiction of the Nazi occupation, a painful part of their history. 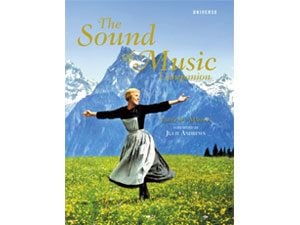 To learn more , pick up The Sound of Music Companion by Laurence Maslon (Rizzoli International Publications, 2015).