Whether you're an old-school Princess Leia lover or a Darth Vader diehard, what better way to spend Star Wars Day than planning a visit to one or more of these 20 earthly destinations that played a part of a galaxy far, far away in one or more of the film franchise's episodes. May the fourth be with you! 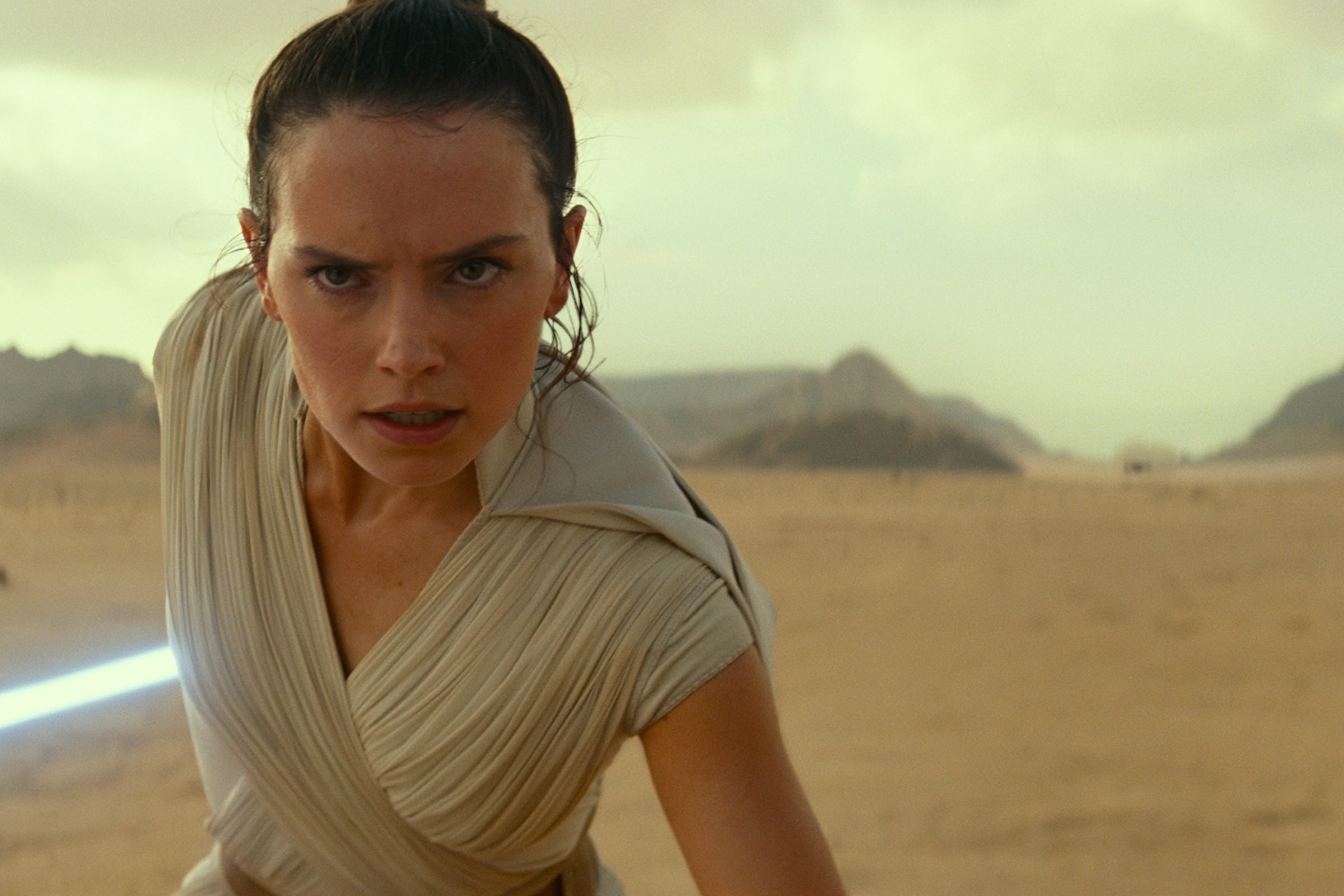 Much of the fictional Star Wars universe is created on soundstages and with special effects. This will most certainly be true in the final film of the Skywalker nine-ology (Star Wars: The Rise of Skywalker), which hits theaters in December. So far Disney will confirm only one real-life filming location—the Wadi Rum desert in Southern Jordan. As for what part it plays in the plot, both the studio and Lucasfilm Ltd. remain mum. However, the photo does show the newest trilogy's burgeoning hero Rey ready for battle with her lightsaber drawn. Feel free to speculate and post about it on Reddit with all the other mega-fans. Also, check out these corny Star Wars jokes you can use in your posts. 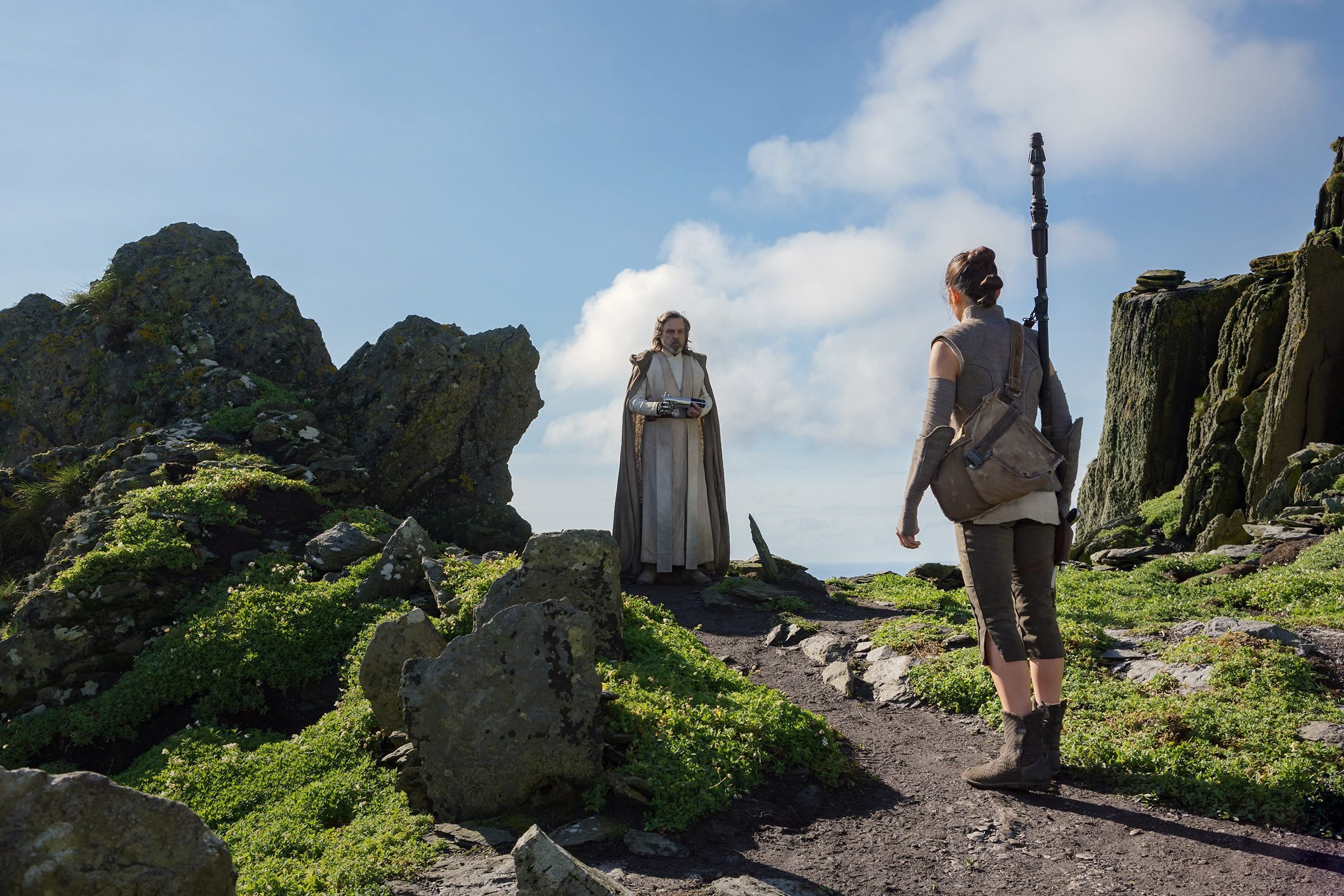 Rey found Luke Skywalker hiding on Ahch-To, a punishing but gorgeous island planet, in the final moments of Star Wars: Episode VII The Force Awakens. Then in Star Wars: Episode VIII The Last Jedi, Rey pesters Luke until he trains her there among its hills and rock formations. The shoot made Skellig Michael, a towering sea crag located roughly seven miles off the southwest coast of Ireland in County Kerry, a tourist magnet. Many visit to walk the hundreds of rock steps as she did. They lead, according to World Heritage Ireland, to a monastery built between the sixth and eighth centuries 600 feet above sea level by ascetic monks. 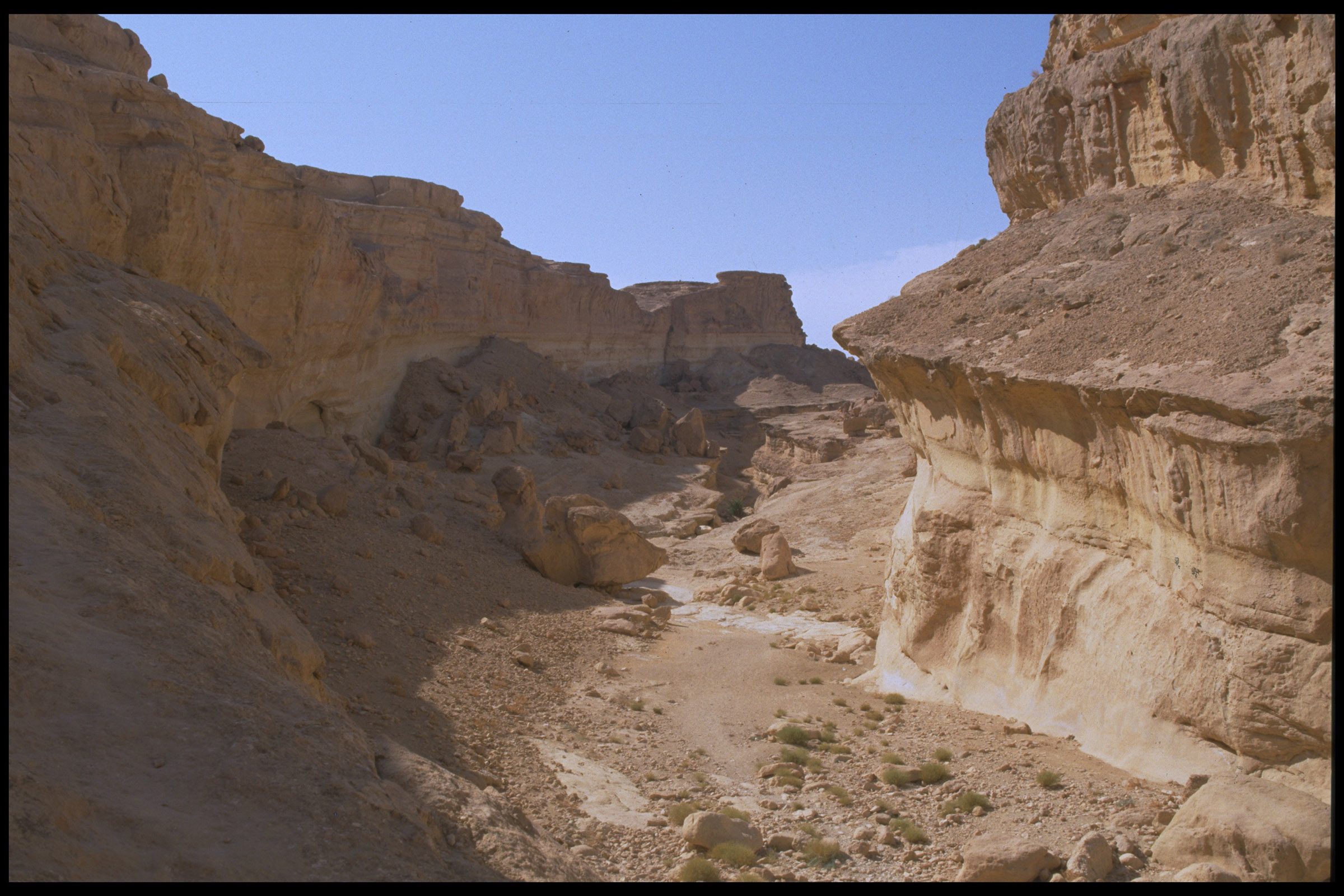 Creator/Director George Lucas chose this Northwest African sandy country as a stand-in for desert planet Tatooine, the planet Luke Skywalker grew up on according to Smithsonian Magazine. Several locations appear on screen including the Shubiel Gorge near Tozeur. It's where R2D2 was abducted by Jawas and Luke was attacked by Tusken Raiders in the original full-length film Star Wars: Episode IV: A New Hope that started it all in 1976. The ferry port town of Ajim was used for the exteriors of Obi-Wan Kenobi's home, which in real-life was an old mosque according to Mental Floss, and the Mos Eisley Spaceport. Tunisia also shows up in Star Wars: Episode I The Phantom Menace and Star Wars: Episode II Attack Of The Clones. 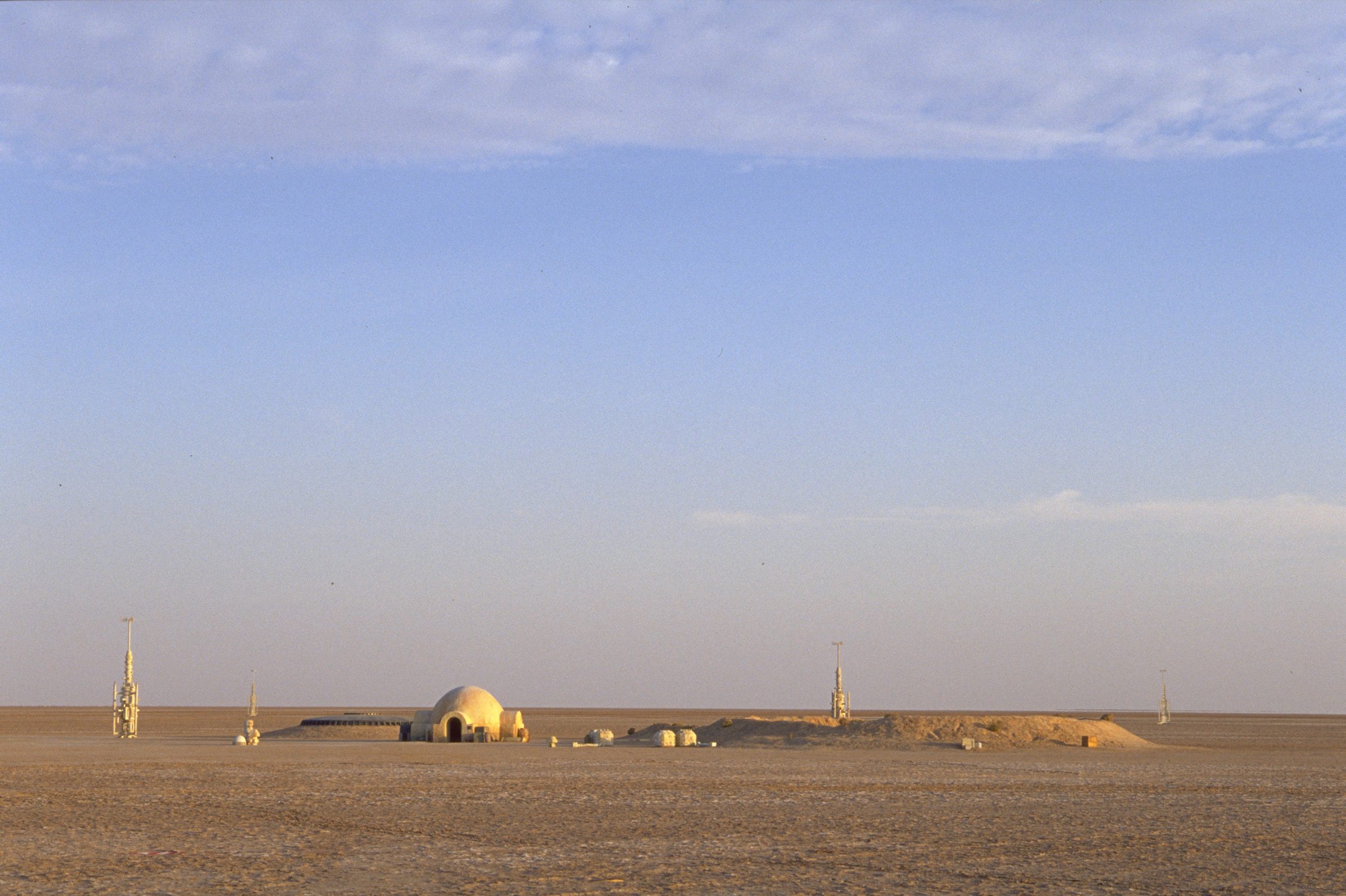 The subterranean Hotel Sidi Driss in Matmatat was visited by the SW crew on several occasions over the course of 24 years. It made its first appearance as Luke's boyhood home on the planet of Tatooine in A New Hope. Production returned in 2000 for the prequel Attack of the Clones. Four of the hotel's now famous pits are sleeping quarters and the fifth functions as the restaurant and guests eat in Uncle Owen and Aunt Beru's dining room. The set dressings and props now decorate the unique lodgings. They were not left the first time around according to Atlas Obscura. 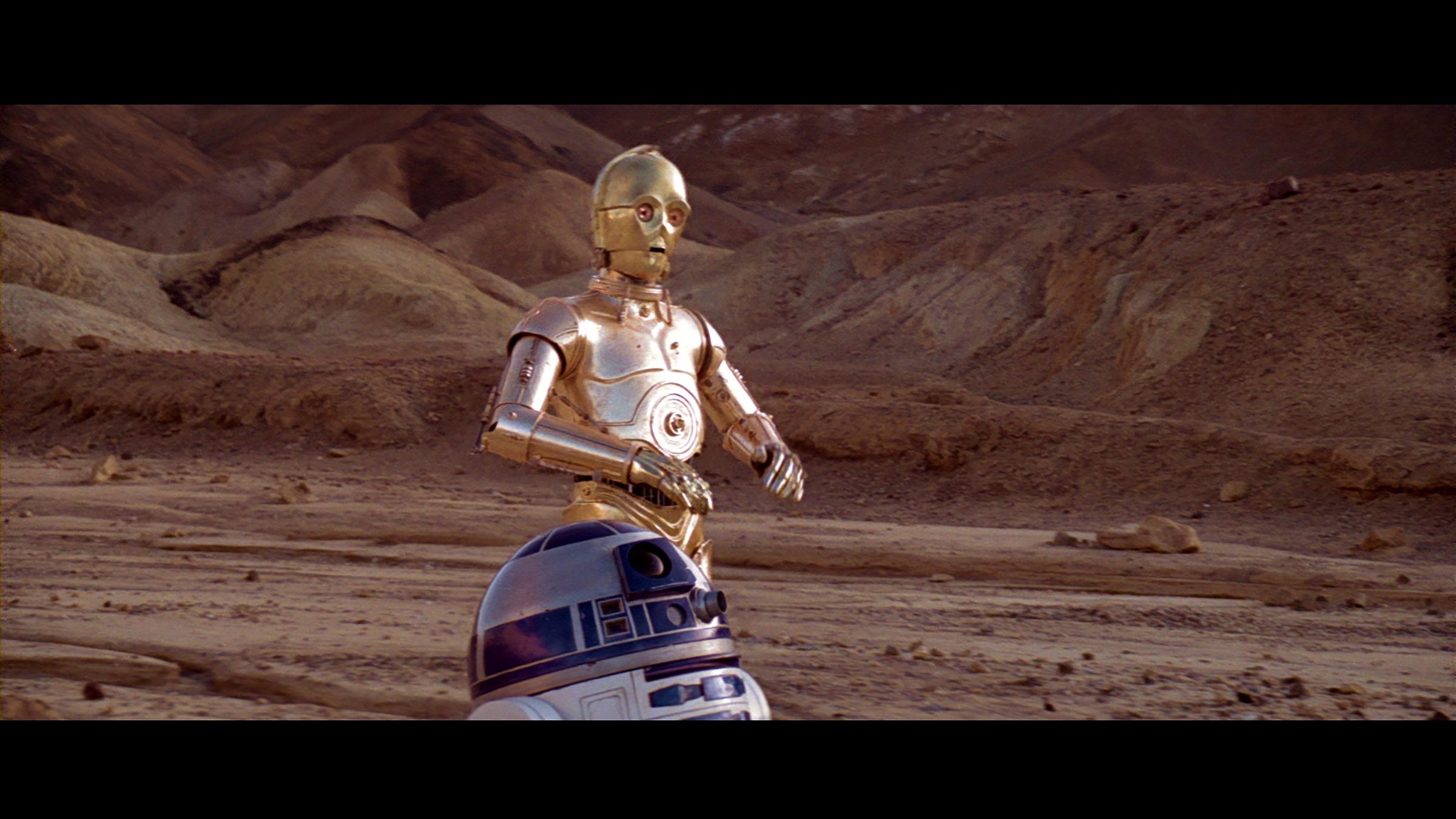 Because one desert was apparently not enough to truly capture the dusty, arid conditions of Tatooine, the New Hope production set up camp in this U.S. National Park. Some footage was spliced with Tunisian reels to achieve the final product. The panoramic point Dante's View was used as an establishing shot for Mos Eisley. R2D2 and C3PO crash their escape pod into the Mesquite Flat Sand Dunes. The Jawas kidnap the golden droid and take him to their sandcrawler in Artists Palette on Artists Drive and Golden Canyon. Tusken Raiders ambush Luke in Desolation Canyon. They, like the Jedi, returned in Episode VI, to shoot in Twenty Mule Team Canyon and meet Jabba The Hut. Death Valley made the list of 12 best vacations for Star Wars super-fans. 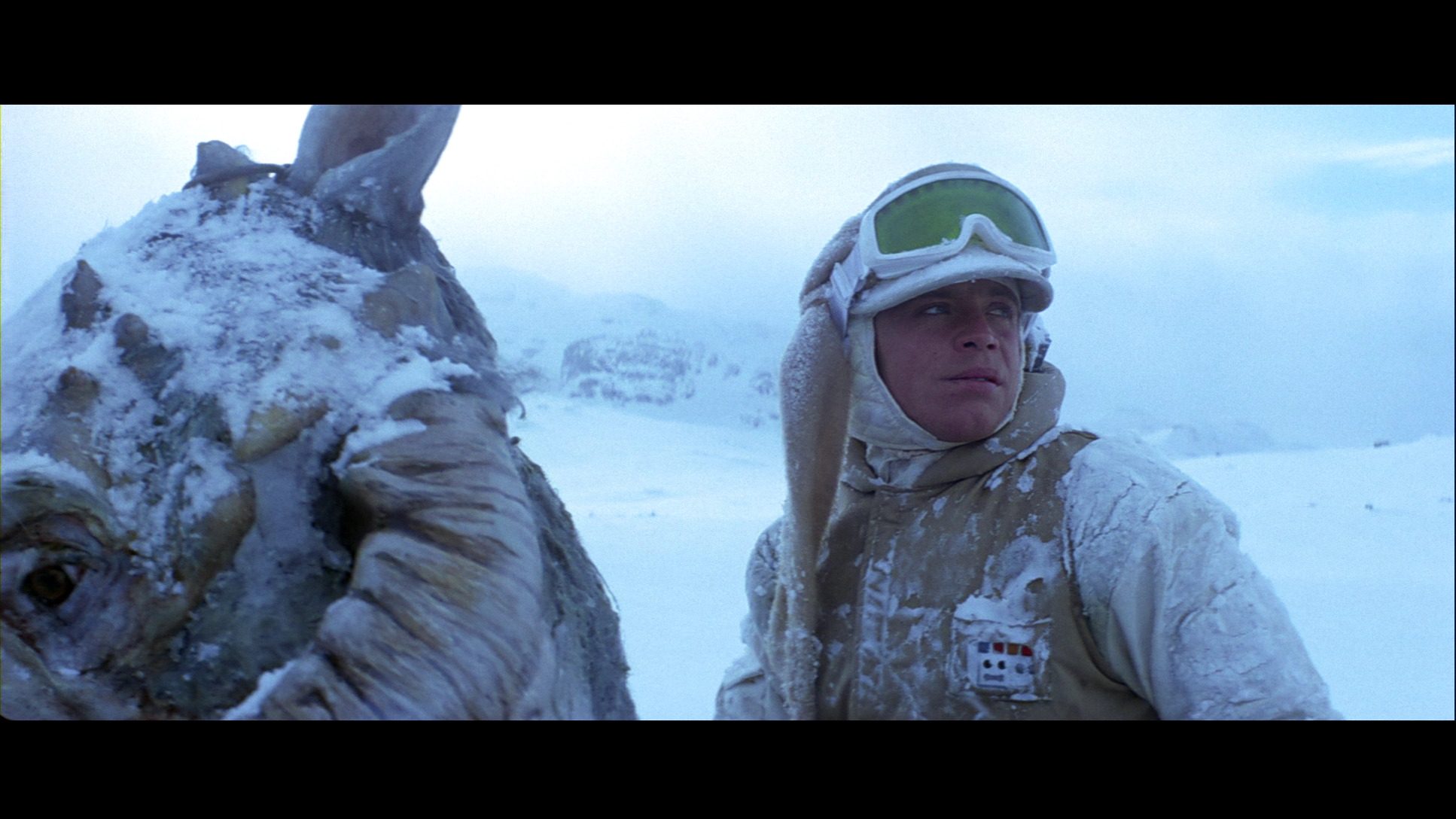 A small isolated railroad stop town between Oslo and Bergen was the site of several scenes from Star Wars: Episode V The Empire Strikes Back. Several bits of the battle of Hoth, the icy planet where the Rebel Alliance set up its Echo Base, were filmed on the nearby Hardangerjøkulen glacier. According to Mental Floss, director Irvin Kershner turned bad weather into his good luck in 1979. When a snowstorm moved in, he grabbed two important moments outside the Finse 1222 Hotel: Luke escaping the Wampa cave and his interaction with the spirit of Obi-Wan Kenobi prior to Han Solo saving him. 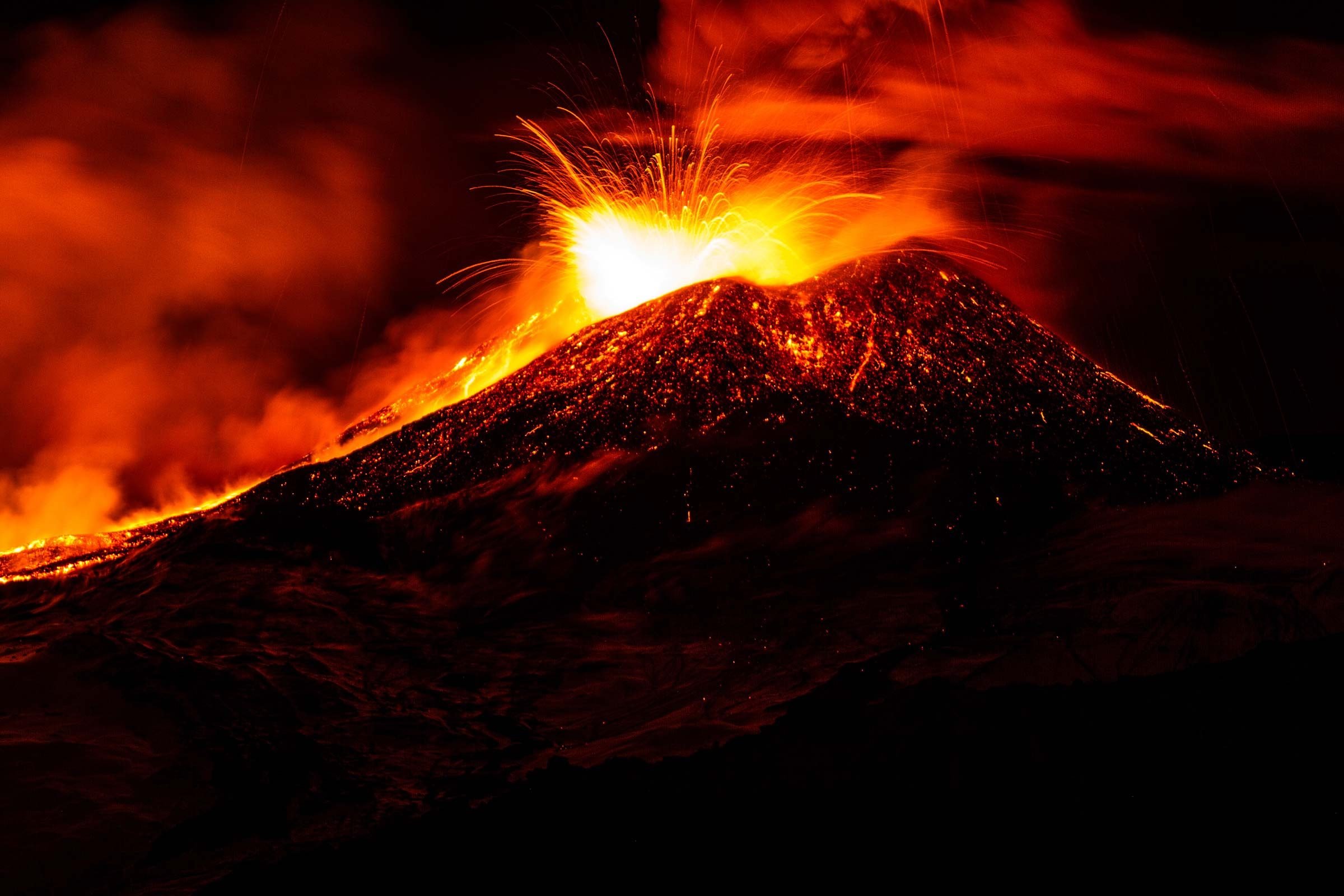 Another conveniently timed natural disaster was used to get the desired look when George Lucas was completing the epic Star Wars: Episode III: Revenge of the Sith end battle between Obi-Wan and his protégé Anakin. The fight took place at a mining facility on Mustafar, a volcanic planet that eventually became the location of Darth Vader's fortress. Mount Etna was erupting during filming so Lucas sent a team to shoot flowing lava to add realism to the plate photography and background according to Mental Floss. Probably best if you visit the island Sicily—and these 12 other volcanoes that could erupt next (or already are)—during a dormant phase. 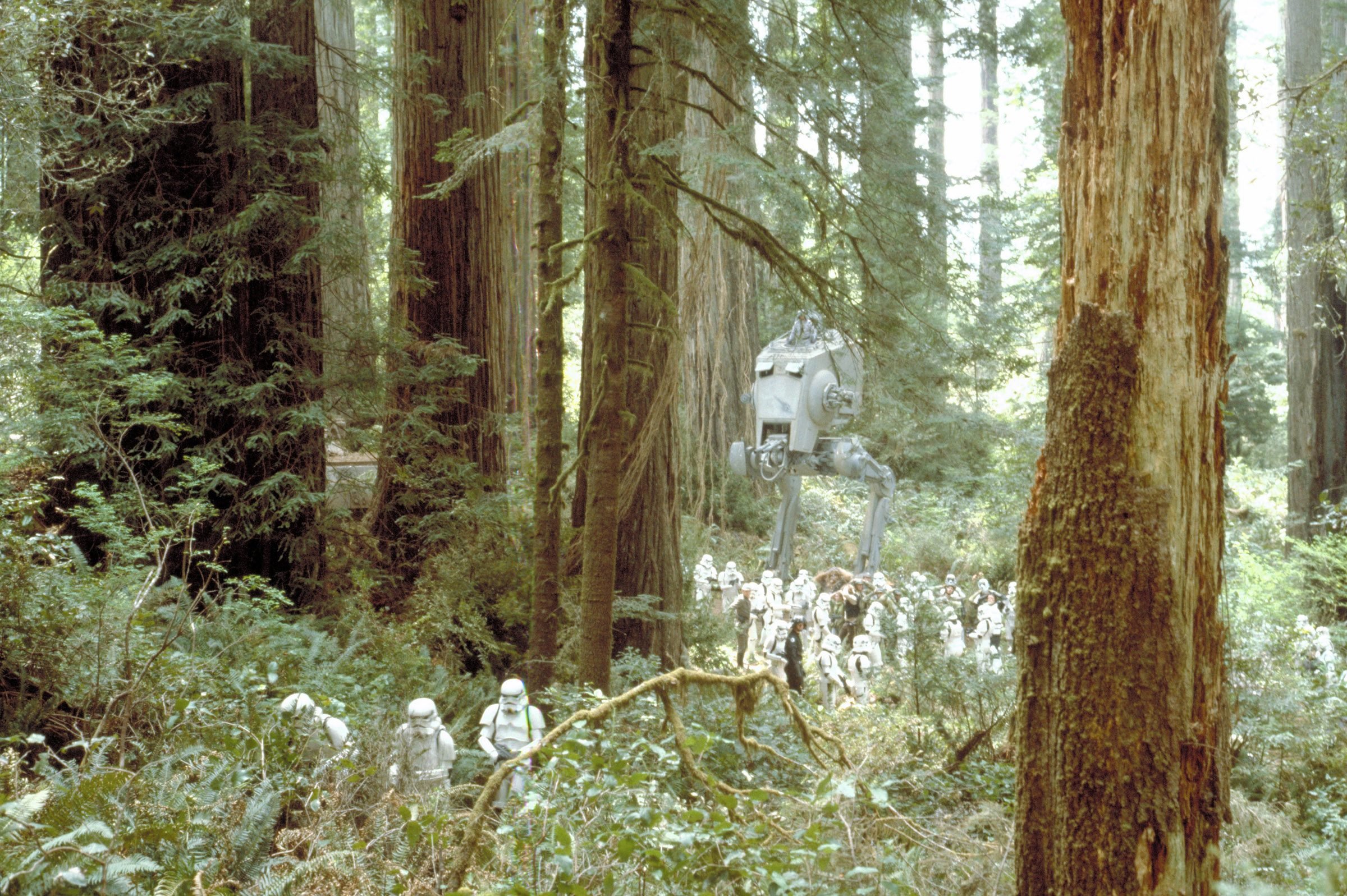 Whether you personally love or hate the nonsense-mumbling alien teddy bears from Return of the Jedi, the Ewoks and their rudimentary weapons helped save our on-the-run rebel heroes from the original trilogy and invited them to take refuge in their tree houses. Their home, the forest moon of Endor, took inspiration from the picturesque Redwood groves of Northern California, a couple of counties above Lucas' headquarters, Skywalker Ranch, and home. 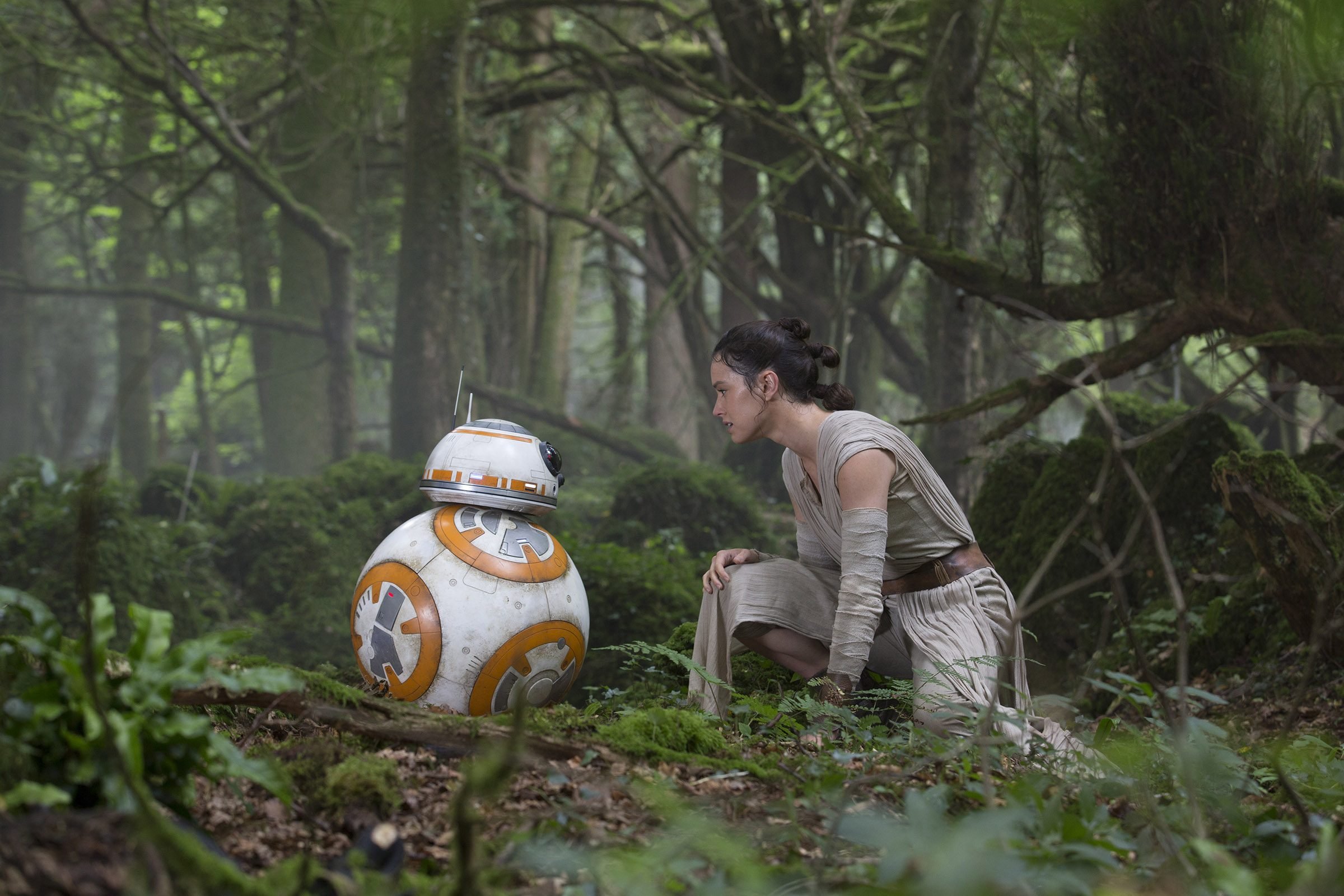 A different forest was used when it came time to stage a fight between Kylo Ren and Rey in The Force Awakens. Daisy Ridley and Adam Driver swung their sabers around in the Forest of Dean section of Puzzlewood in England. According to Business Insider, the woodsy wonderland also inspired J.R.R. Tolkien and J.K. Rowling when they were creating their own fictional forests for The Lord of The Rings and Harry Potter respectively. 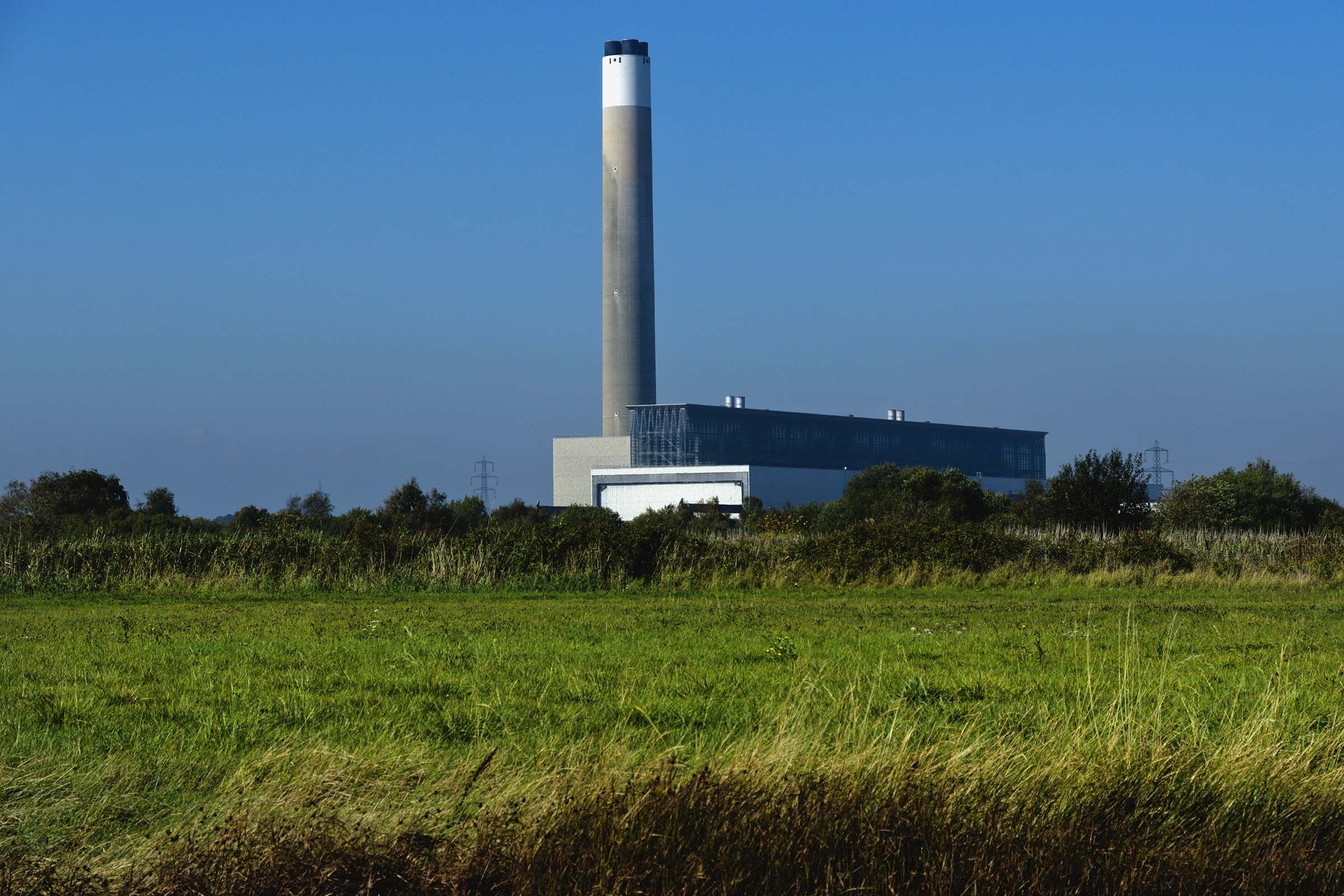 If you're team Han, you'll want to swing by the 300-acre plot that contains the decommissioned Fawley Power Station in the English county of Hampshire. According to The Location Guide, the opening scenes of Solo: A Star Wars Story, the origin tale of one of the most iconic characters of all time, were shot there. Han Solo (Alden Ehrenreich) and Qi'ra (Emilia Clarke) are caught in a high-speed chase as they attempt to sneak off the planet Corellia. But hurry if this Brutalist building is on your bucket list as The Daily Echo newspaper reports that there is a plan being promoted to blow it all up in a series of controlled explosions over the next two years in order to make way for housing. Here are 15 more locations you need to visit ASAP before they disappear for good.